The CBD industry is growing rapidly. This is primarily due to the increased number of uses attributed to the cannabinoid. Research into the possible benefits of CBD oil has only expanded in recent times. While CBD isn’t federally legal in the United States, licensed farmers can cultivate industrial hemp.

As a result, CBD sellers have easy access to high-quality hemp and can produce better products. The versatility of cannabidiol is impressive, with users citing different reasons for using it. In this article, we outline seven of them, although there are many more.

While one can consume CBD oil for a skin issue, it is better to use a topical product like a cream or salve. Cannabidiol has anti-inflammatory properties and could reduce oil production and increase moisture. CBD could potentially relieve itching and pain too.

There is also a suggestion that CBD acts as an antioxidant. In this instance, the cannabinoid could help repair the skin from damage caused by free radicals. The result may include a reduction in blemishes and acne breakouts. Also, products containing CBD are rich in omega-3 and omega-6 fatty acids. These can help improve the general appearance of skin.

Researchers asserted that CBD ointment was a safe, effective, and non-invasive alternative for people with certain skin disorders.

In a study published in La Clinica Terapeutica in 2019, researchers analyzed CBD ointment’s effect on patients with severe skin diseases. They found that the product significantly improved the skin parameters. The researchers also asserted that CBD ointment, when applied to the skin, was a safe, effective, and non-invasive alternative for people with certain skin disorders.

Although the THC in cannabis is linked with several benefits, there are also side effects to consider. This is especially the case in strains with a very high level of the cannabinoid. Excessive THC consumption could lead to anxiety and paranoid thoughts. However, there is evidence that CBD could mitigate certain adverse effects associated with THC.

A study published in The Journal of Neuroscience in 2019 looked at how CBD could counteract THC’s psychotropic effects. The research involved the use of lab rats. The rodents that consumed THC showed elevated levels of activated ERK (extracellular-signal-regulated kinase). ERK is a molecule found in the brain’s hippocampus that triggers THC’s neuropsychiatric effects.

The rats that consumed a mix of CBD and THC acted like the rodents in the control group. While the high-THC rats exhibited anxiety behaviors, the ones that used a combination of CBD and THC showed fewer signs of anxiety. They were also less sensitive to fear-based learning. 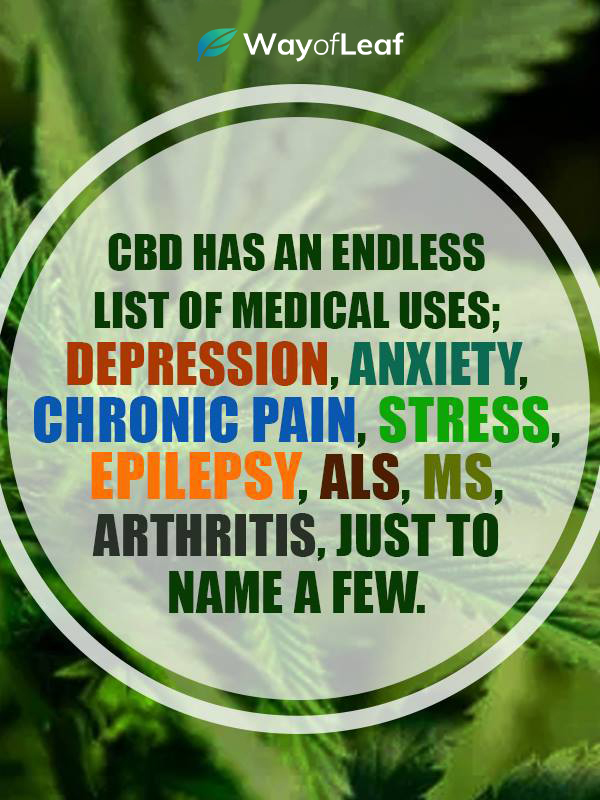 According to the researchers, this was a sign that CBD potentially blocks THC’s ability to overstimulate the hippocampus’ ERK pathway. As a result, it possibly prevents THC’s negative effects.

With this in mind, cannabis strains with a 1:1 CBD to THC ratio could offer a sweet spot between intoxication and minimal adverse effects.

CBD may also reduce general anxiety. This is why it is becoming more popular amongst individuals with social anxiety and PTSD. It seems as if CBD interacts with the CB1 and CB2 receptors in the peripheral and central nervous systems. The cannabinoid could alter the serotonin signals in the brain.

Serotonin is a neurotransmitter that plays a major role in our mental health. There is a link between depression and low levels of serotonin. Therefore, if CBD could increase a person’s serotonin production, it may alleviate anxiety and depression symptoms.

If CBD could increase a person’s serotonin production, it may alleviate anxiety and depression symptoms.

A study published in the Journal of Psychopharmacology in 2010 investigated CBD’s effects on people with a social anxiety disorder (SAD). They consumed either a placebo or a 400mg dose of CBD orally. The researchers found that the CBD users experienced a decrease in anxiety levels.

A possible issue is the size of the dose received by the volunteers. However, some CBD users say they feel positive effects with a significantly lower concentration.

4 – It Can Even Help Your Pets

The use of CBD for dogs and other pets is a highly controversial topic. Opponents of the practice suggest that cannabidiol could potentially cause harm. However, most evidence to date shows that it is THC, rather than CBD, that could prove problematic for pets.

Dogs, cats, and other mammals also possess an endocannabinoid system (ECS) like humans. Therefore, CBD should theoretically work similarly in pets as it does in humans.

Research into CBD’s effect on pets is thin on the ground. However, a study published in Frontiers in Veterinary Science in 2018 looked at how CBD affected dogs with osteoarthritis. The researchers discovered that the dogs who used CBD for four weeks enjoyed a significant decrease in pain. They also showed an increase in activity compared to the dogs in the placebo group.

Tobacco cigarettes remain the #1 cause of preventable death and disease in America. Each year, smoking accounts for almost half a million deaths in the U.S.

Despite these sobering facts, approximately 34 million Americans still smoke tobacco cigarettes. One survey from 2015 revealed that almost 70% of smokers wanted to quit. Up to 55% of the survey’s respondents said they tried in the last 6-12 months, but only 7% succeeded.

However, recent research shows that CBD could help smokers to quit. The cannabinoid potentially:

A study published in Addictive Behaviors in 2013 looked at how CBD usage impacts tobacco smokers. Twenty-four smokers were divided into two groups. One-half of the smokers used a placebo, while the other group received an inhaler containing CBD.

For one week, the CBD users were supposed to take a puff every time they craved a cigarette. At the end of the study period, the CBD users smoked 40% fewer cigarettes than the placebo group.

At the end of the study period, the CBD users smoked 40% fewer cigarettes than the placebo group.

According to the researchers, CBD could help people quit smoking because it acts as a weak inverse agonist on CB1 receptors in the brain. It also inhibits FAAH, an enzyme known for breaking down the bliss molecule, anandamide. Consequently, the interaction on the CB1 receptors by CBD could reduce the effects of nicotine.

In smaller amounts, CBD could help give you a boost in energy. Conversely, consuming a large amount of the cannabinoid is possibly beneficial in aiding a good night’s sleep. 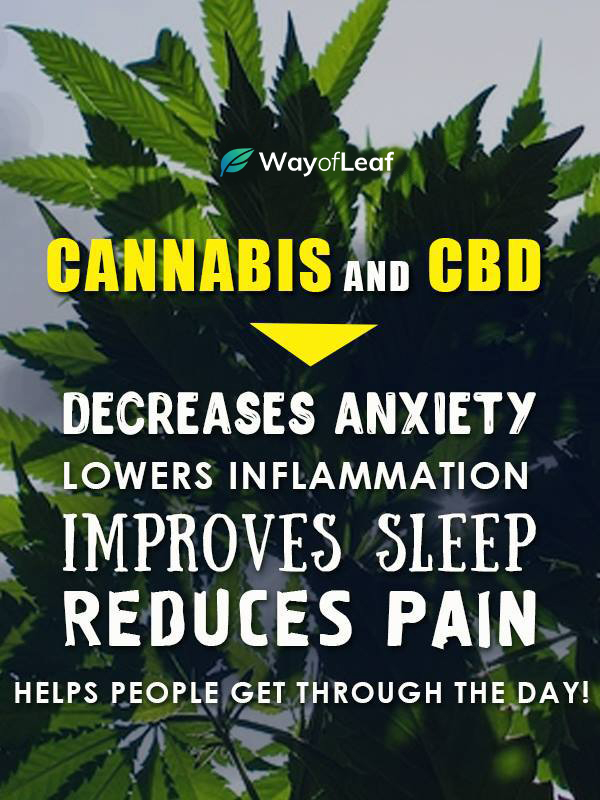 This is because CBD is a substance that has a biphasic effect. The term ‘biphasic’ relates to having two systems or phases in operation simultaneously. This study published in Neuropsychopharmacology went into great detail on the biphasic effects of cannabinoids in anxiety responses.

Another study, published in 2020, found that acute doses of CBD helped reduce feelings of anxiety. Higher doses of CBD appear to produce a feeling of relaxation, if not sedation. However, smaller amounts are linked with an increase in energy. This is why some users combine CBD with coffee in the morning. The aim is to amplify the effects of caffeine.

This versatility makes CBD a potentially useful product. In theory, you could take a small amount in the morning and perhaps microdose during the day. Then, in the evening, you could consume a large amount to help you sleep.

7 – The Cannabinoid Could Help with Depression

Aside from reducing anxiety, CBD potentially helps individuals with depression. In #3, we outlined how CBD could help people produce more serotonin. If this is the case, it means that cannabidiol could act like an antidepressant.

A study published in 2019 analyzed the effect of CBD on mice. The researchers found that one dose of CBD produced an antidepressant like effect on the rodents. They received between 7mg and 30mg of CBD per kilogram of bodyweight.

Related article
The Truth of Antidepressants and Why People Prefer Cannabis

Another study, published in 2018, found that CBD had anti-stress effects. As a result, the compound could decrease stress-related depression.

Final Thoughts on the Amazing Uses of CBD Oil

It is fascinating to see so many potential uses of CBD. It is important to note that research is in its relative infancy. However, to date, the available studies paint a positive picture regarding the usefulness of cannabidiol.

CBD could help with certain skin conditions and reduce stress, anxiety, and other symptoms of depression. It could combat THC’s negative effects, help you quit smoking, give you energy, or help you sleep. There is even evidence that CBD can help pets.

Cannabis Businesses During the Coronavirus

It's not all bad news

The future of cannabis medicine?

Can a Scientist Gain Access to Marijuana for Research?