Written by Dr. Mike Bohl
5 min read
0 comments
Read Later
All information on this website is for general informational purposes only and is not intended or implied to be a substitute for professional medical advice, diagnosis or treatment.

More and more people are turning to cannabis for various medical conditions, but how about Meniere’s disease? Could the plant offer a solution, or is it likely to make matters worse?

Here’s all you need to know about Meniere’s disease and cannabis.

What Is Meniere’s Disease?

Sometimes known as auditory vertigo, Meniere’s disease is a medical condition that affects the inner ear.

The inner ear, or the labyrinth, contains a fluid called endolymph. The fluid stimulates receptors that help the brain to gauge its position and movement, thus helping with balance. While the exact cause is unknown, in Meniere’s disease, there is a build-up of this fluid in the labyrinth, resulting in a variety of symptoms.

Approximately 615,000 people in the United States have Meniere’s disease, with doctors diagnosing 45,000 cases each year.

The symptoms of Meniere’s disease include:

These symptoms can come on suddenly in episodes that last anywhere between a few minutes and several hours. Sometimes a person will lose their balance, resulting in falls.

Due to the unpredictable nature of Meniere’s disease, it can cause extreme distress in its sufferers. Approximately 63% of people with Meniere’s also suffer from anxiety or depression.

The precise cause of Meniere’s disease is unclear. Theories include:

Furthermore, there is a link between Meniere’s and migraines, with just over half of Meniere’s patients experiencing a migraine during their lifetime. The two conditions possibly share some underlying pathology, such as cranial blood vessel dysfunction.

Several lifestyle factors may also contribute to Meniere’s attacks in susceptible people. They include:

There is no cure for Meniere’s disease, although it is possible to manage some symptoms with medication and lifestyle changes. Some people find relief from Meniere’s disease by making the following adaptations:

Some drugs that doctors commonly prescribe to relieve dizziness and nausea include:

Patients should take these medicines as prescribed by their provider in the event of an attack. In some cases, a drug called betahistine could be useful as preventative medicine, although evidence is limited. The problem is that all these medications can cause side effects, especially benzodiazepines, which also have a high potential for addiction.

Therefore, some patients are wondering whether natural remedies like cannabis can help with Meniere’s disease.

There is little clinical evidence that cannabis helps Meniere’s disease specifically. In fact, in high doses, THC (one of the active compounds in marijuana) can cause dizziness as a side effect. Too much THC can also cause anxiety or even paranoia, especially in people already prone to these mental states.

Therefore, anyone hoping to treat Meniere’s disease with cannabis needs to exercise extreme caution to avoid making matters worse. That said, there is evidence that cannabis could relieve at least some of Meniere’s disease’s symptoms. Let’s take a look.

Although there is no existing research on Meniere’s disease and cannabis, there have been studies into the following symptoms:

Unfortunately, research into cannabinoids and tinnitus has shown that they may have a negative effect. For example, a 2015 study for Frontiers in Neurology looked at the impact of THC and CBD on tinnitus.

The researchers administered the cannabinoids to rats with tinnitus due to acoustic trauma (exposure to loud noise for one hour). They found that the compounds reversibly increased signs of tinnitus in the rats.

One of the best-known and best-studied uses of medical marijuana is for relieving nausea and vomiting. These are symptoms that frequently affect people with Meniere’s.

A 2011 review in the British Journal of Pharmacology summarizes the knowledge to date. It explains that both THC and CBD have the potential to relieve nausea.

In fact, some research has found oral THC to be at least as effective as the drug prochlorperazine.

Many people with Meniere’s disease also suffer from anxiety and depression, and cannabis could provide some relief. However, caution is necessary when using high-THC marijuana strains.

According to a 2017 University of Washington report, low doses of THC can relieve anxiety while higher doses may increase it. On the other hand, CBD seems to relieve anxiety regardless of the amount.

Another 2014 study for CNS & Neurological Disorders Drug Targets found that CBD had both anti-anxiety and antidepressant effects.

People with Meniere’s disease can often feel fatigued for several days following an attack. Currently, there is no clinical evidence that cannabis helps with this symptom. However, many cannabis users report feeling more energetic and focused after using specific strains.

Cannabis could help to relieve migraines for people with or without Meniere’s disease.

A 2016 study for Pharmacotherapy had promising results. It followed 121 migraine patients whose physicians recommended medical marijuana. The average frequency of migraines reduced from 10.4 to 4.6 per month. Furthermore, 48 patients reported positive effects, while just 14 reported adverse effects. These included drowsiness and difficulty controlling the dosage.

There is no clinical evidence that one marijuana strain is better than another for Meniere’s disease. However, based on THC’s potential to cause side effects, it may be wise to opt for high CBD strains instead. Even then, we recommend consulting a knowledgeable physician before using any type of cannabis for Meniere’s disease.

Some of our favorite high CBD marijuana strains include: 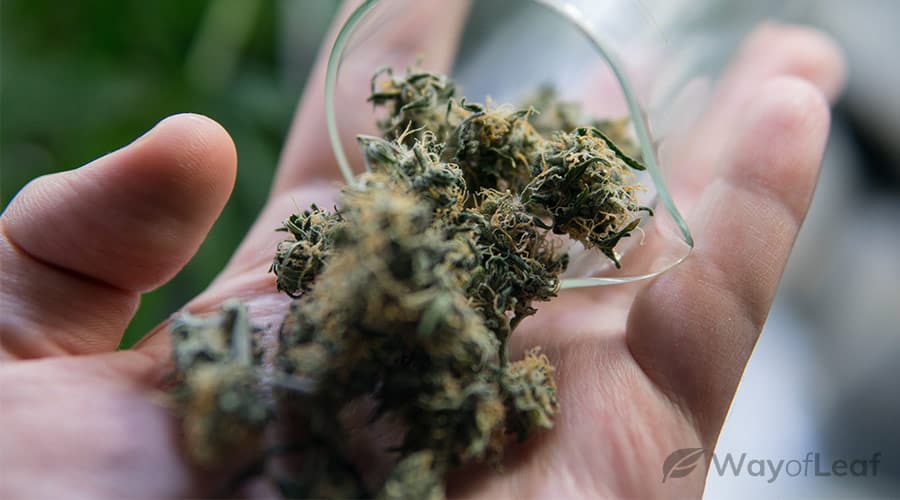 This hybrid strain contains up to 20% CBD and 6% or less THC. This unusual ratio makes it one of the most popular medical strains around. Patients use ACDC to relieve a whole range of symptoms, including nausea, migraines, and anxiety. It may also be useful for managing chronic pain. 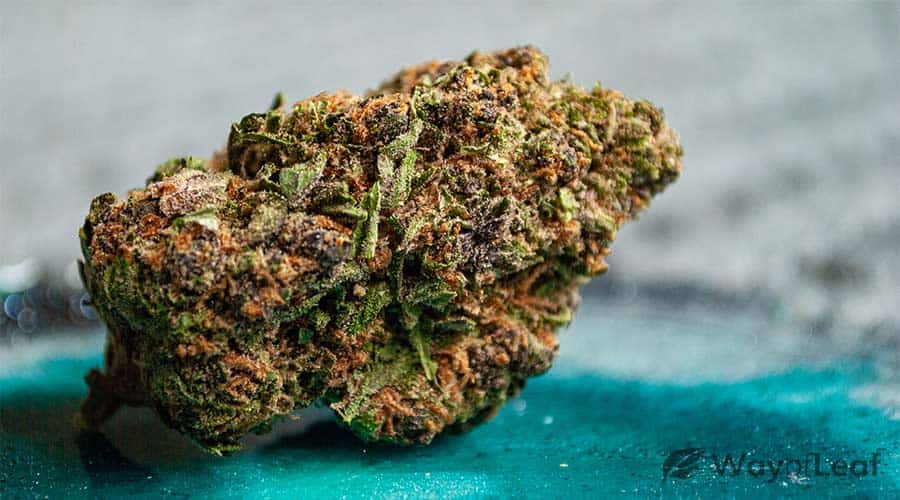 This is another hybrid strain, although it is slightly sativa-leaning at 60%. Ringo’s Gift contains generous CBD levels of up to 20% and as little as 1% THC. Consumers of this strain say that it induces relaxation without sedation, which may make it useful for managing day-to-day stresses. 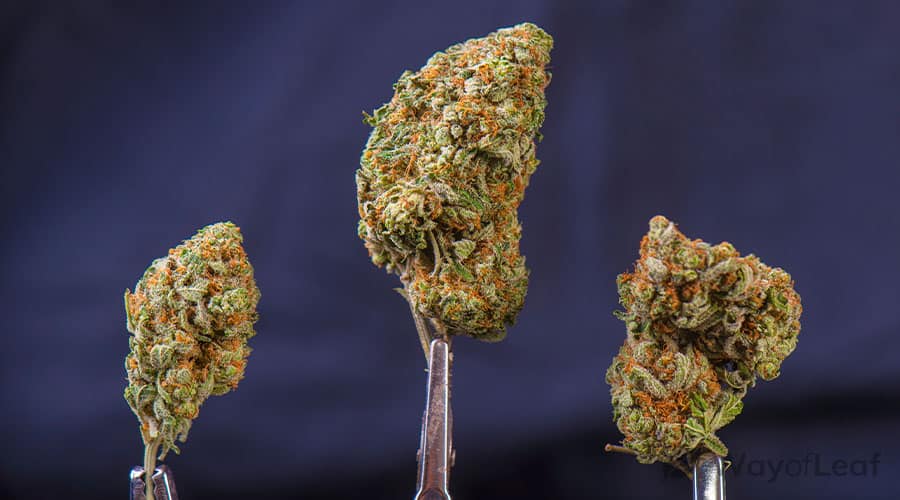 Another hybrid strain, Charlotte’s Web, is slightly indica-leaning at 60%. It contains up to 20% CBD and very low levels of THC. Consumers claim that this strain can help to relieve symptoms such as fatigue and migraines, among others. The strain’s breeders have also used this cannabis to create a high-quality CBD oil for those who would rather not smoke.

Using cannabis for Meniere’s disease is a risky business, as too much THC could worsen symptoms of dizziness, tinnitus, and anxiety. Using a high CBD strain or CBD oil may be safer, although there is very little evidence available regarding how it affects Meniere’s specifically.

Anyone wishing to try marijuana for Meniere’s disease should talk to a doctor and carefully weigh up the pros and cons before proceeding. While it may help with some of the symptoms, finding the correct dosage is a delicate balancing act.

If you have used cannabis or CBD oil for Meniere’s, we’d love to hear from you. Let our community know how it affected you in the comments below.