Medically reviewed by Jessica Anderson, ND
Written by Patrick Lynch, M.A.
6 min read
23 comments
Video
Read Later
All information on this website is for general informational purposes only and is not intended or implied to be a substitute for professional medical advice, diagnosis or treatment.

Inflammation can be the result (and/or the cause) of a vast number of medical conditions and ailments. As far as what inflammation actually is, it is (according to WebMD) “a process by which white blood cells, and substances they produce, protect [the body] from infection against foreign organisms, such as bacteria and viruses.”

Inflammation symptoms such as fevers, chills, and body aches often indicate an acute or infectious disease process and will typically resolve without medical treatment.

Even a simple thing such as a knee scrape or a toothache, for instance, will cause inflammation. In some diseases like arthritis, however, the body’s defense system triggers inflammation when there are no foreign invaders to fight off. These diseases then cause damage to the body’s tissue as the inflammation thinks it is fighting off an intruder, when, in fact, there is none.

Later in the article, we’ll discuss some of the best marijuana strains for inflammation. First, though, let’s talk a little bit more about what inflammation is, and why it is central to so many different health issues.

When a foreign substance attacks the body, it goes into combat mode. It sends white blood cells to fight off the invading bacteria or virus, which flow to the infected area and start to heal the injury.

This can result in redness, warmth, and swelling. While this general process helps the body to repair itself, it can also cause pain. A scenario like this is referred to as ‘acute inflammation,’ and is a normal healing process.

Chronic inflammation, on the other hand, is an exaggerated response that can destroy nearby tissue. If you leave chronic inflammation untreated, it can lead to severe medical conditions such as heart disease, cancer, arthritis, and more. 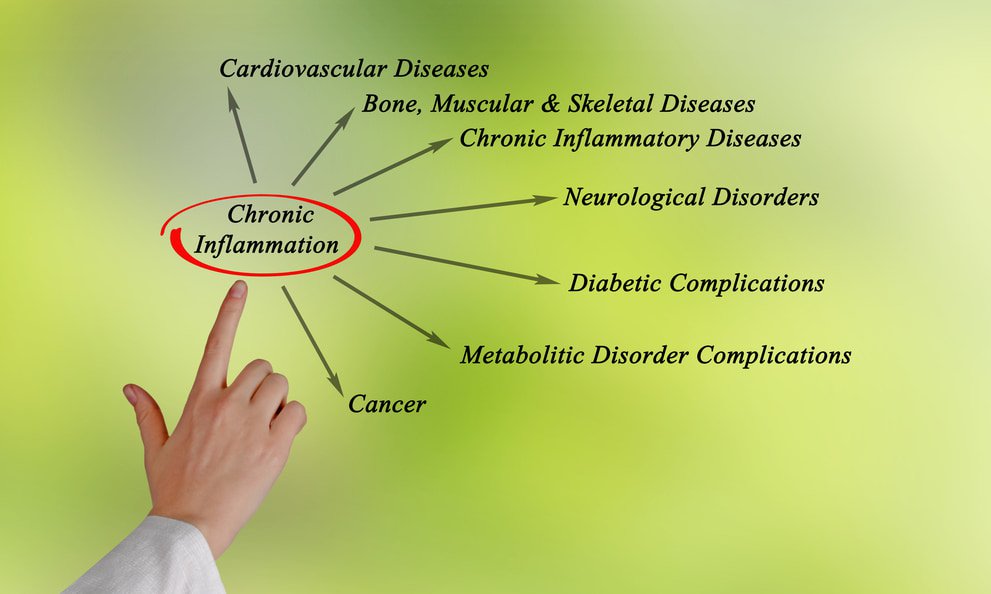 Inflammation is also associated with countless other disorders. Examples include rheumatoid arthritis, psoriatic arthritis, Crohn’s disease, and other inflammatory bowel diseases. It is even believed to affect internal organs and may be a preliminary cause of some forms of cancer.

When treating these types of diseases and their subsequent inflammation, the main goal is to reduce pain. As you’ll see shortly, however, many common anti-inflammatory medications come with a range of unwanted side effects.

When treating inflammation, it is essential to understand the source of the problem because each disease requires specific treatment. For example, arthritis-related inflammation is very different from acute inflammation.

The type of treatment often depends on a patient’s age, type of disease, overall health, medical history, and other factors, and needs to be determined by a doctor.

Numerous pharmaceutical drugs are designed specifically for inflammation and swelling. These range from nonsteroidal anti-inflammatory drugs (NSAIDs) such as aspirin and ibuprofen to disease-modifying antirheumatic drugs like sulfasalazine, leflunomide, and azathioprine.

When using any pharmaceutical drug, it is crucial to meet with your primary care doctor regularly to monitor any side effects.

Increasingly, those who suffer from chronic inflammation have been turning to alternative remedies. These remedies can include things like CBD oil, natural herbal salves, and medical marijuana.  Cannabis has been used to treat inflammation for centuries, and it is typically assumed that cannabinoids such as THC and CBD are the primary reasons for its effects.

A review by Pandey et al., published in Pharmacological Research in February 2011, looked at endocannabinoids and immune regulation. Researchers found that CBD and THC potentially act on immune functioning to trigger anti-inflammatory responses.

Numerous other studies suggest THC and CBD may be able to help with inflammation. A 2019 study in Scientific Reports, for example, looked at the ECS of patients with colorectal cancer and inflammatory bowel disease (IBD). It found that patients with these conditions have an altered ECS; by adding cannabinoids to the equation, individuals could experience relief from inflammation-based symptoms. 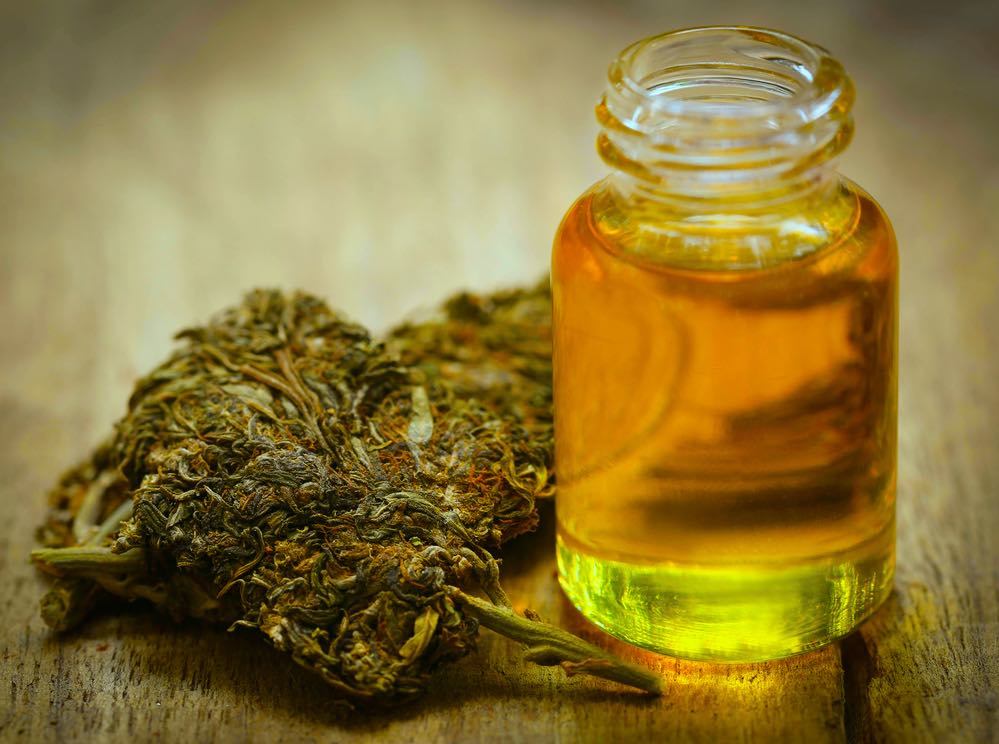 What’s also interesting is the role that terpenes can play. A study by Gallily et al., published in Cannabis and Cannabinoid Research in December 2018, looked at the anti-inflammatory properties of some of the active terpenoids in cannabis. The study concluded that the oils exerted “moderate anti-inflammatory activities in an in vivo anti-inflammatory model, without affecting tumor necrosis.”

But what about all of the different strains out there? Are some better than others when it comes to dealing with inflammation?

This strain is a multiple Cannabis Cup award winner. It is a popular option for medicinal users due to its profile of high CBD levels and low levels of THC. ACDC is a sativa-dominant phenotype of the legendary Cannatonic strain. Overall, its THC content rarely exceeds 1%, while its CBD level typically ranges between 16% and 24%. 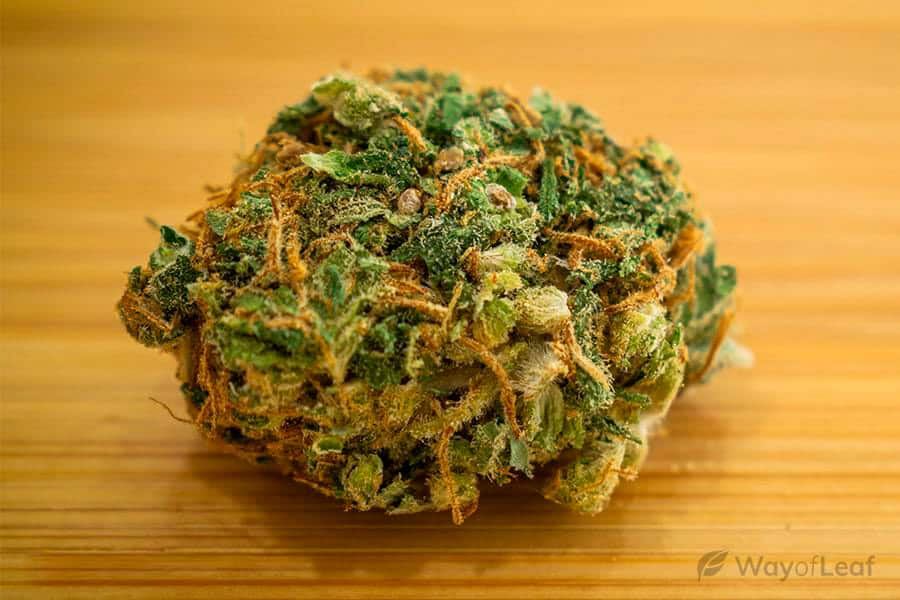 With a CBD-to-THC ratio as high as 20:1, ACDC does not produce an intoxicating high. Rather, many users report that it provides a kind of full-body relaxation. Although the THC content is exceedingly low, you should feel an uplift in mood, coupled with a greater sense of focus. And of course, lowered levels of inflammation.

In general, ACDC is mostly consumed by medicinal users. Patients say that it is useful at alleviating the symptoms of chronic pain, and also at reducing feelings of stress and anxiety. Some also find it helpful for depression, PTSD, and seizures. Many people say that the strain works wonders for combatting nerve pain and issues caused by inflammation.

Harlequin is a sativa-dominant hybrid strain with a unique genetic lineage. It is a cross between Nepali indica, Thai sativa, Colombian Gold, and Swiss sativa lineages. The result is a strain with an odd (and varying) ratio of THC-to-CBD. Its THC and CBD levels can reach 15% apiece, although some breeders try to maintain a ratio of around 5:2 (CBD: THC). 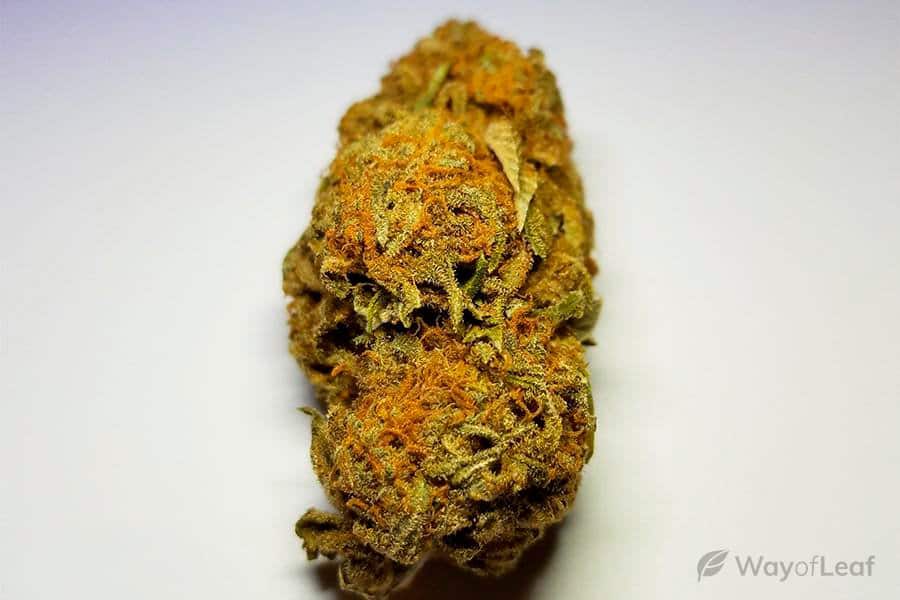 Users praise Harlequin for offering a mental release without causing tiredness. It is an excellent option if you wish to relax after a long day but still maintain focus and energy. Many claim that the strain provides an uplift in mood, and because the CBD counteracts the THC so well, THC-induced negative side effects are often limited.

As far as having any anti-inflammatory properties, some Harlequin users claim it is a good option for arthritis-related pain. You can stay alert and avoid the paranoia that sometimes accompanies high-THC strains, all while reducing joint-specific soreness and swelling. Harlequin is also commonly used for depression, headaches, anxiety, and stress.

Cannatonic is another excellent marijuana strain known for its high CBD levels. It is a cross of G13 Haze and MK Ultra. Most sellers offer this strain as a balanced hybrid with a THC content of up to 6% and CBD levels that can reach 17%. 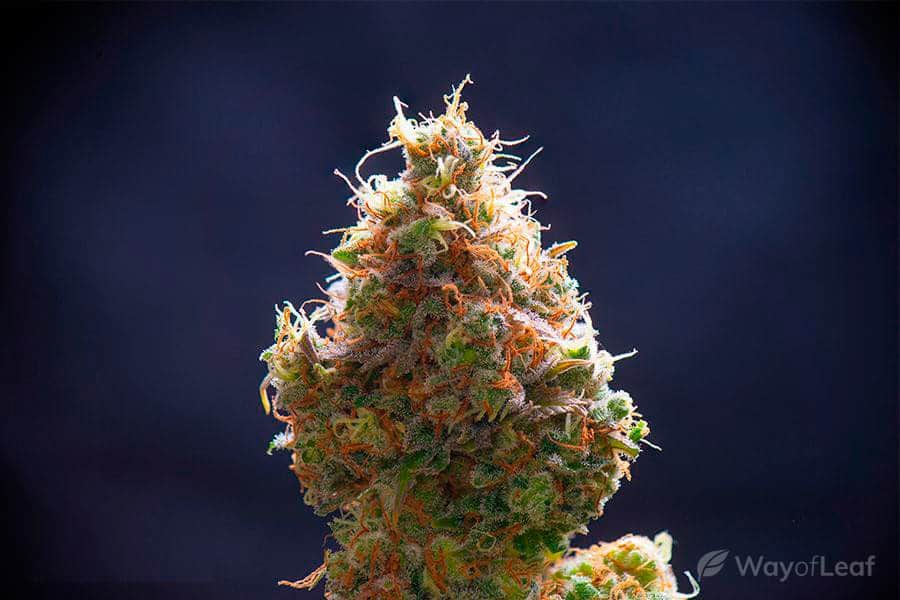 Once again, while there is ample THC, the high CBD content means you’ll enjoy a mellow high rather than an overwhelming one. After consuming Cannatonic, you may feel as if the weight of the world is lifted off your shoulders. In general, users suggest that they feel optimistic and happy after using this strain.

Patients use Cannatonic to address and prevent pain-producing inflammation, as well as seizures and epilepsy. That said, while it is a favorite among medicinal users, it is also a good option in general for new recreational cannabis users. Most experience a mild buzz that results in a pleasant first-time marijuana experience.

Girl Scout Cookies is one of the most popular strains on earth, and its name belies its immense potency. GSC is a cross between OG Kush and Durban Poison and is an indica-dominant strain, unlike others on this list. 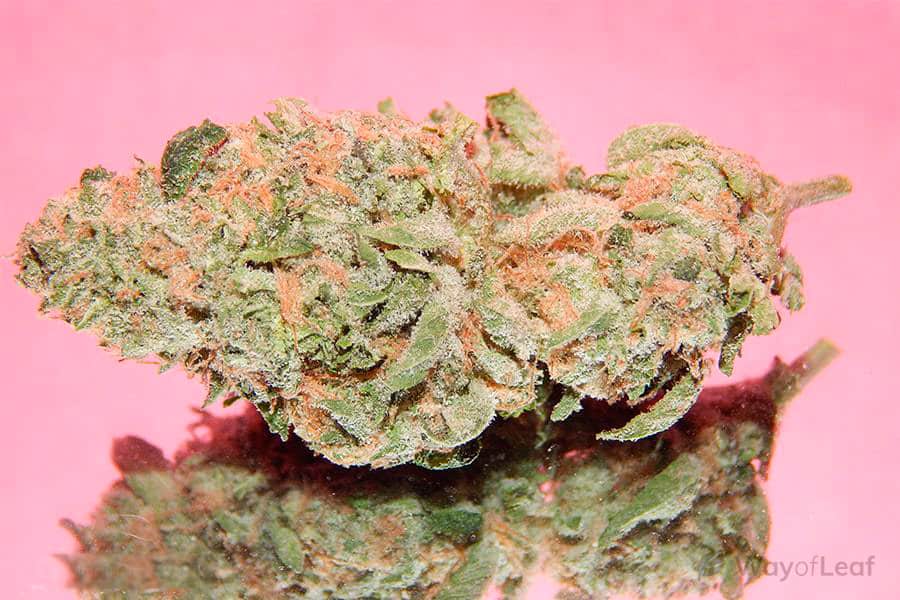 GSC has an exceptionally high THC content (capable of reaching 28%), against just 0.2% CBD or less. While newcomers can enjoy higher CBD strains like ACDC, Harlequin, and Cannatonic, we don’t recommend trying Girl Scout Cookies unless you are an experienced cannabis user. Even experienced users are best served to begin with a small amount if they’ve never tried GSC before.

The high-THC content may produce powerful, full-body pain relief. In fact, Girl Scout Cookies is a common medical dispensary strain for all sorts of inflammation and the intense pain that is associated with inflammation. As a bonus, you may experience a boost in energy, and the iconic candy and mint taste is sublime!

This marijuana strain has a lot of history around it, as it was first developed to treat a young epileptic girl named Charlotte Figi. The Stanley Brothers of Colorado specifically bred Charlotte’s Web as a high-CBD strain in the hopes that they could reduce the number of seizures associated with Dravet’s syndrome. 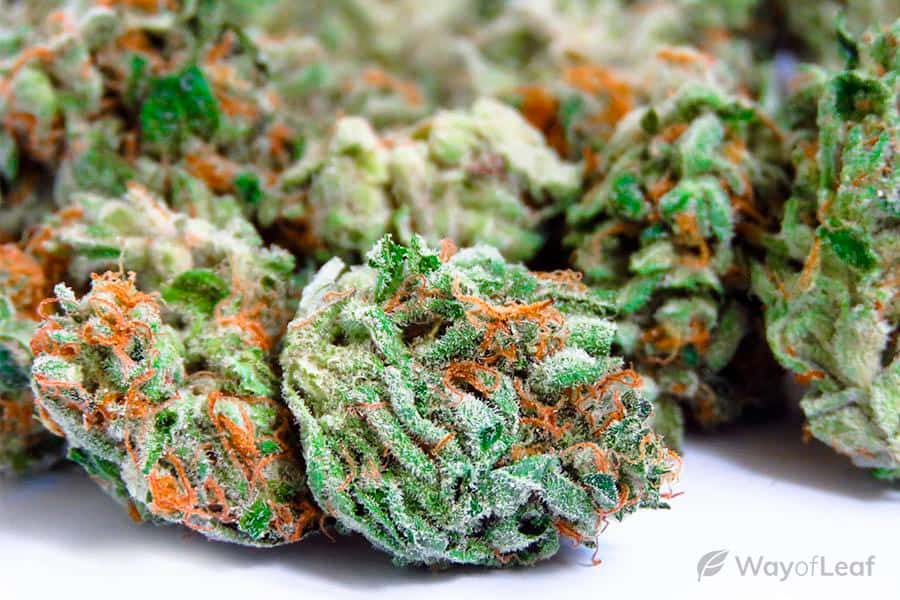 Their hard work paid off spectacularly as young Charlotte’s rate of seizures per month fell from hundreds to just a few. There is minimal THC in this strain, and it rarely exceeds 0.3%. On the flip side, the high CBD content of Charlotte’s Web (up to 20%) makes it a favorite among medicinal users, including those looking to manage symptoms of inflammation.

Charlotte’s Web may be useful to ease the symptom frequency or intensity of a variety of medical conditions in which inflammation is either a cause or a by-product. And of course, the lack of THC means there is no intoxicating high. Additionally, many users suggest that they feel happier, more energized, and more focused after consuming this famous strain. 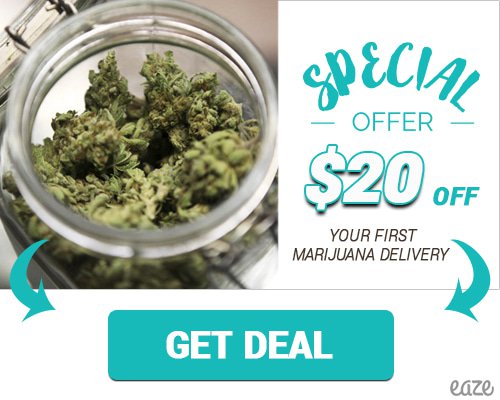 One of the main issues facing the marijuana industry is ensuring there is enough scientific evidence to back up claims. The prohibited status of the herb around the world has hampered research greatly, but increasingly so in the United States, avenues to improved analysis are opening. This should do wonders in the coming years and decades to enhance knowledge on the best marijuana strains for inflammation.

What we do know is that the active compounds in cannabis can provide a reduction in inflammation. Still, even though early research is promising, we must learn more before jumping to conclusions.

We recommend discussing your options with a licensed physician before proceeding with marijuana to treat inflammation or any other medical condition for that matter. Medical marijuana laws vary widely by state, so make sure you know and understand the specific laws in your area before proceeding.