Written by Editorial Team
3 min read
0 comments
Read Later
All information on this website is for general informational purposes only and is not intended or implied to be a substitute for professional medical advice, diagnosis or treatment.

Marijuana, and especially the psychoactive cannabinoid THC, could help alleviate a number of medical conditions. However, becoming an alternative treatment for erectile dysfunction is not something many people associated with weed, until now. Also known as ED, erectile dysfunction affected up to 18 million American men aged 20+ according to an old study by Johns Hopkins in 2007.

ED is a condition that many men feel embarrassed about even though they are far from being alone. When Viagra was introduced into the market in 1998 by Pfizer, the little blue pill was like manna from heaven for males eager to prove their masculinity. Today, the ED drugs market is a billion-dollar industry set to be worth $4.8 billion by 2030.

Pfizer knows the difference its drug has made and regularly increases the price. The Financial Times reported that the average wholesale price of the 100 mg Viagra pill had increased by over 10% in a year and was now almost $90! If only there were an alternative. Guess what? There is, but you won’t believe it!

If you live in Colorado and have ED, you can give CannaMojo a try. That’s the name of the new THC-infused ‘male enhancement supplement’ created by Revered Inc. On the website, you are asked what you get when you combine an all-natural male enhancement pill with a medically versatile plant. The answer is, of course, CannaMojo. 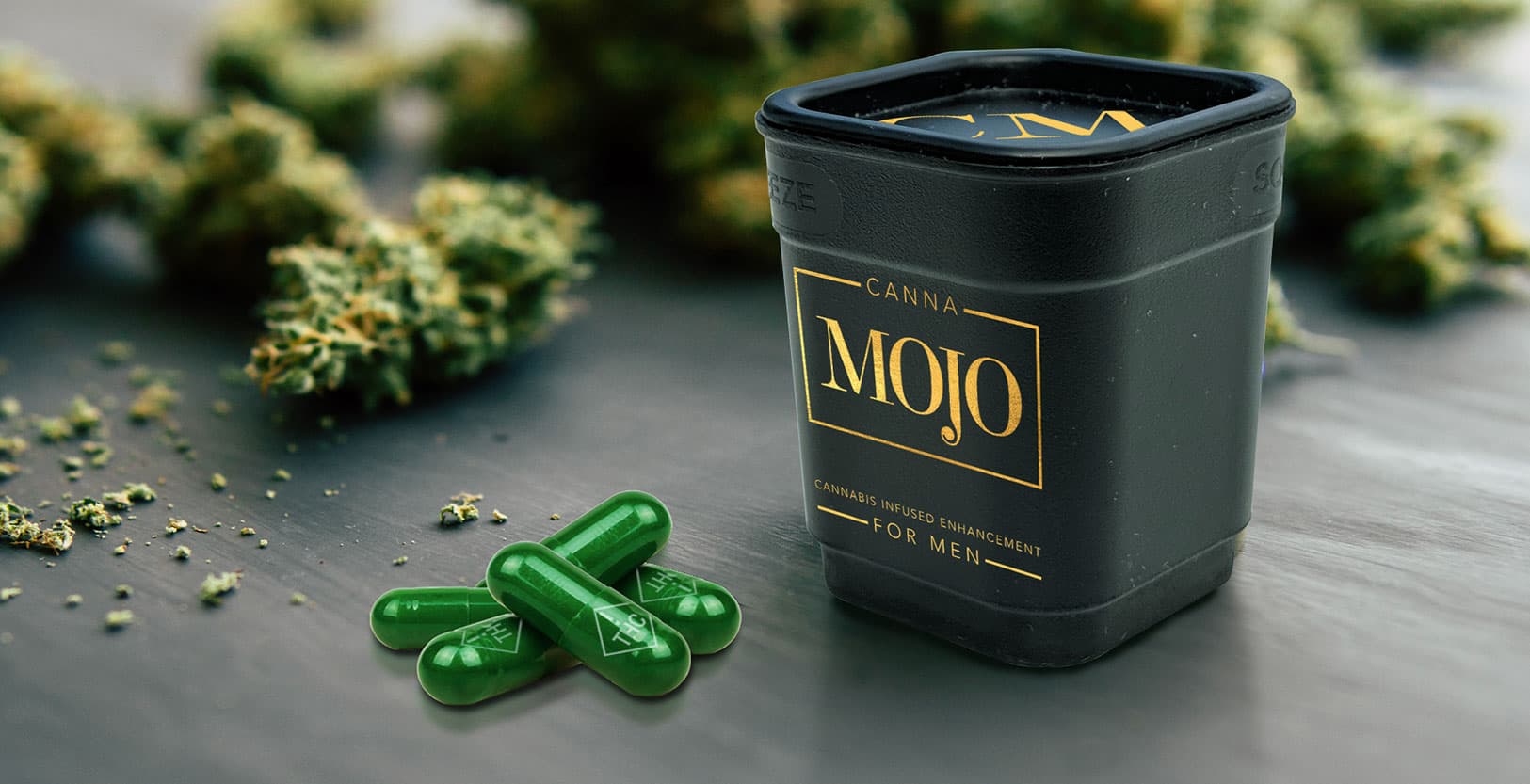 According to the company, their product will help you enjoy a harder erection, maximize your natural size, and help you enjoy “full throttle pleasure for you and your partner.” Revered is adamant that CannaMojo does not come with the same side effects associated with other ED remedies.

It is true that Viagra and other erectile dysfunction treatments come with numerous potential side effects. These range from mild (upset stomach and back pain) to severe (abnormal vision and heart attack symptoms). You must also consult with a physician about taking Viagra if you have, or have ever had, liver or kidney disease, high or low blood pressure, a stomach ulcer, or one of a host of other maladies.

Although it is possible that you have a sensitivity to THC, a dose of CannaMojo is unlikely to result in side effects beyond discomfort although we can’t be 100% sure. The supplement is based on an herbal remedy called HardMojo that helped more than four million customers across a five-year period.

HardMojo was created by certified pharmacologists and was designed to increase the length, size, and duration of your erections, as well as boosting sensitivity and increasing endurance. It is a proprietary blend with 14 natural herbs known for their ability to balance hormones, elevate mood, and increase blood flow. It begins working within 60 minutes, and its effects can be felt for up to four days!

CannaMojo is an upgrade. Although it falls back on the HardMojo formula, it adds pure THC distillate, taken from Quest Concentrates. According to Revered’s CEO, Ted Naylon, CannaMojo is a fantastic combination that works very differently to eating or smoking weed. He said that it combines the ED alleviating properties of HardMojo with an increased sensuality, along with a mood & confidence boost provided by THC. Naylon claims that it turns Joe Average into an “all-star.”

Best of all, you can enjoy a dose of CannaMojo for just $10, a small fraction of what you’ll pay for Viagra. The downside is that you can only purchase from one of seven locations, all of which are in the state of Colorado. Here is the list:

Furthermore, only Canna Cabinet (in Pueblo) is outside of Denver.

Does Science Back CannaMojo Up?

According to the official website, THC is a vasodilator which improves blood flow. It also helps you in the following ways:

CannaMojo also promises to ensure you ‘recover’ faster and are ready to go again, as well as ensuring you last longer and helping you achieve rock hard erections.

As it happens, there IS science to back up these claims. Marijuana has the potential to help ED sufferers in a multitude of ways. One of the biggest contributors to erectile dysfunction is a combination of stress and anxiety. There is an array of studies which show that marijuana can reduce the effects of this mojo-killing duo.

A study* by Carrie Cuttler, published in the Journal of Affective Disorders, looked at how marijuana could help patients with anxiety. She discovered that those who used a high CBD/low THC strain experienced relief from short-term depression. Those who used a high THC/low CBD strain benefitted from significantly reduced stress. Therefore, men who use CannaMojo should theoretically feel less pressured to ‘perform’, and enhanced relaxation should help with their ED.

Dr. Lester Grinspoon, known affectionately as “the grandfather of modern medicinal cannabis research,” said that we have not yet explored the many benefits of weed. He believes that there are three broad categories of usefulness. Recreation and medicine are the first two and are now widely practiced in states where marijuana is legal. The third use involves enhancing human experiences. For example, weed can improve the taste of food, but it is also capable of improving our sexual experiences.

According to Dr. Mitch Earleywine of the State University of New York, the CB1 receptor, which is activated by marijuana and in particular THC, seems to be involved in general euphoria and tactile sensations. In simple terms, cannabis makes your body feel good, so it is hardly a surprise that it could improve sexual activity.

Users of weed often state that they feel as if time has slowed down. As a result, 60 seconds of intercourse goes from being a disappointment to an unforgettable experience because it ‘feels’ as if you have been going forever. It stands to reason that orgasms seem to last longer. Imagine experiencing a 30-second orgasm!

If ladies are feeling left out, never fear! There is a product for you as well. Although CannaMojo has been created for men only, the company 1906 has created a product exclusively for ladies which is called High Love. It is weed chocolate, and each one contains 5 mg of CBD and 5 mg of Blue Dream CBD oil mixed with a host of herbs.

Once again, High Love is only available in Colorado, although you can buy it in Denver, Boulder, and Aspen. THC is capable of enhancing a woman’s sexual experience as well because it ensures their entire body feels relaxed. Women sometimes claim that marijuana makes them feel extremely aroused.

There aren’t many studies on the effects of weed on sex. After all, it’s not as if scientists can give it to men and women in a lab and ask them to have sexual intercourse! There is also a possibility of marijuana causing sexual inhibitions if you consume too much. Potential side effects include dry mouth and getting stuck in your own thoughts. As great sex is dependent on both parties relaxing, adding mental strain to the equation is not conducive to world-class lovemaking.

HardMojo was a big success when it was released, so if THC really enhances the sexual experience, CannaMojo has the potential to be an international sensation. The major obstacle at present is lack of availability. At the time of writing, you can only purchase it in Colorado, in Pueblo and Denver. At $10 per dose, if CannaMojo is effective, it spells extremely bad news for Pfizer and its Viagra pills which are rapidly heading towards the $100 mark.