Polycystic Ovary Syndrome (PCOS) affects anywhere from 8-20% of women of reproductive age around the world. The Huffington Post places the figure at closer to 10% in the United States, but that still equates to 5 million women in America alone. It is a frustrating and life-changing condition for sufferers, but perhaps things are about to change with the news that marijuana could potentially be effective for those with PCOS.

In this article, we will review what PCOS is, how medical marijuana can potentially help with this condition, and which marijuana strains might be best to use.

Polycystic Ovary Syndrome (PCOS): What Is It?

In simple terms, PCOS is an imbalance in a woman’s hormones (too many male hormones and not enough female ones) which potentially interferes with ovulation and makes it harder to get pregnant. If you have PCOS, your ovaries will become enlarged and possibly contain a variety of structures that look like cysts (sometimes known as immature ovarian follicles). If PCOS is left untreated it can have a serious impact on your life; potentially changing your appearance, hampering your ability to have children, and even damaging your long-term health. It is the most common cause of infertility in the United States.

PCOS is the most common cause of infertility in the United States.

Although researchers are aware that there are genetic and environmental factors at play, they don’t know the exact causes of PCOS. The symptoms run in families, so the syndrome is probably caused, in part, by a mutation in one or more genes. An animal study from 2016 suggests PCOS could be caused by chemical or genetic changes that happen in the womb.

The majority of PCOS symptoms are caused by excessively high levels of certain hormones known as androgens. The ovaries produce chemicals (hormones) that control the body’s functions. One of the most important hormones created by women is estrogen. However, the body also creates androgens, and while men usually create far more than women, sufferers of PCOS create excessive levels of androgens and not enough estrogen. 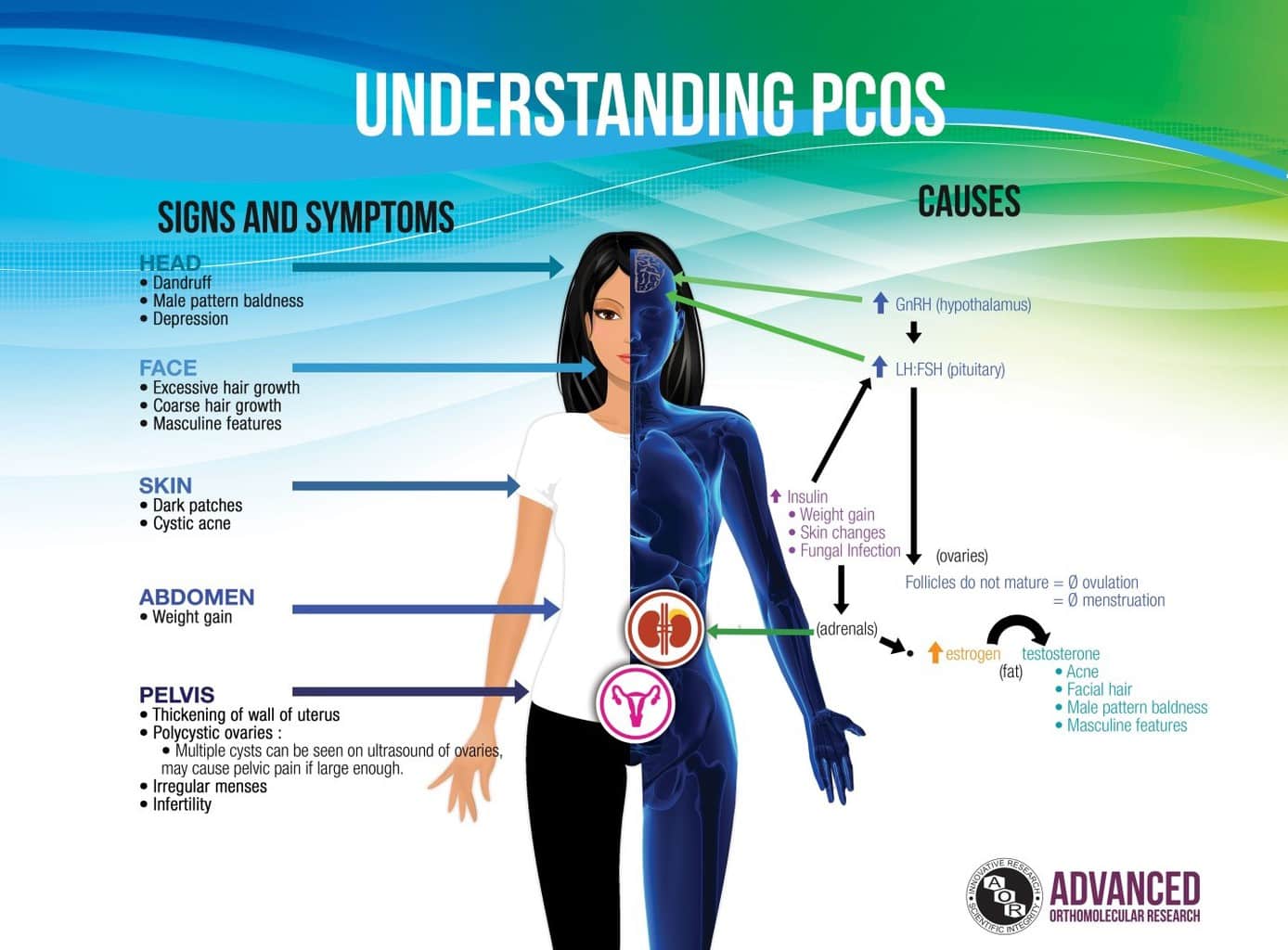 Examining the Symptoms of PCOS

First and foremost, there are three main symptoms used to diagnose PCOS:

However, women with PCOS may also experience the following:

Women who suffer from PCOS live in a terrible world of uncertainty; not knowing whether or not they can have a child is one of the worst feelings there is. It can also make some question their femininity, especially if you are hit with symptoms such as excessive weight gain and extra body hair. Weight loss is extremely difficult, especially as the condition reduces your energy and motivation levels.

As PCOS has a wide range of symptoms, the treatment you’ll receive depends on what is happening to you. Women who don’t want to become pregnant can take oral contraceptives which help regulate menstrual periods, reduce androgens, clear acne and reduce hair growth. Other medications include anti-androgens, but they must be taken with oral contraceptives as they cause congenital disabilities.

Other medications include anti-androgens, but they must be taken with oral contraceptives as they cause congenital disabilities.

There are also insulin-sensitizing agents designed to stabilize your level of glucose and ensure your body is more responsive to insulin.

There are several options to try and treat infertility that arises from PCOS. Common medications include Letrozole, Gonadotropins, Metformin, and Clomiphene.

Medical Research on Marijuana and PCOS

There have been hardly any medical studies relating to marijuana and its direct impact on women with PCOS. While there is no evidence to date which suggests marijuana can help cure PCOS, research shows that it could be potentially effective against depression, a common problem experienced by women with PCOS. A 2005 study by Hollinrake et al. showed that women with PCOS were more likely to suffer from depression than the general population.

It is also likely that cannabis users have a lower percentage of body fat than the overall population which means it could be used to control weight gain. Other benefits of marijuana for PCOS sufferers include a possible reduction in body pain and in anxiety. 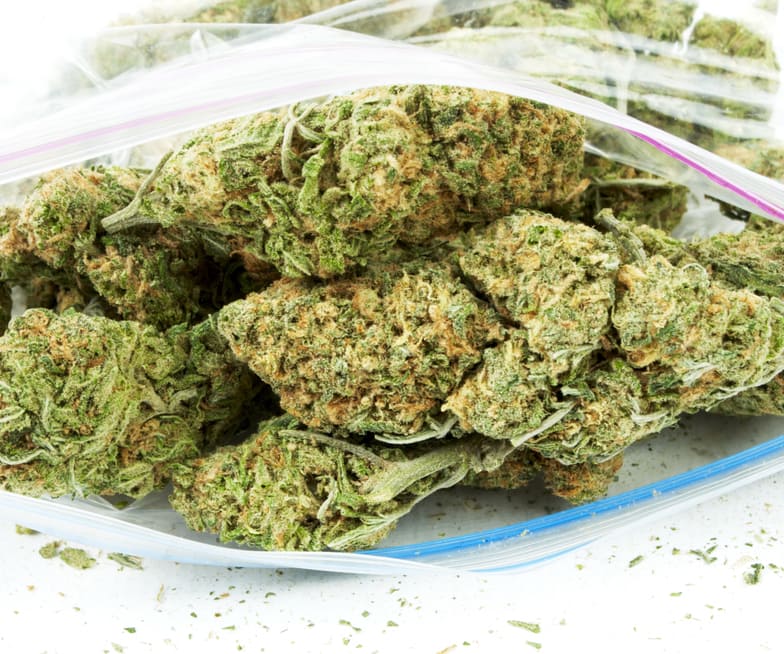 Named after the late Howard Marks, a.k.a. Mr. Nice, who was a long-time advocate of the legalization of cannabis as well as a cult figure to cannabis lovers worldwide. The Mr. Nice strain is a heavily indica-dominant hybrid strain which is widely regarded as being one of the best cannabis strains out there for treating pain.

The Mr. Nice strain is recommended by women who suffer from PCOS as its effects give temporary relief from the symptoms of the syndrome. It is important to be aware if you are new to the Mr. Nice strain, that it is a notorious creeper, meaning its effects kick in slowly but powerfully. As well as being a creeper, this strain is also one that will leave you couch-locked if you overindulge.

The Mr. Nice strain produces a pleasant and euphoric high, which tends to soften as its indica effects start to take hold. Due to the soporific quality of this strain, it is recommended for late evening or nighttime use rather than daytime use.

Sufferers of PCOS might find this strain to be, well, the perfect “remedy” for treating their condition. One of the best things about this strain for the medicinal user is that it contains less than 1% of the psychoactive phytocannabinoid found in cannabis, tetrahydrocannabinol, more commonly known as THC. The low THC content of this strain means that its users can reap all of the medical benefits it has to offer without experiencing any mind-altering effects.

The low THC content of this strain means that its users can reap all of the medical benefits it has to offer without experiencing any mind-altering effects.

While the THC content is extremely low, samples of the Remedy strain have been shown to contain CBD levels as high as 15%.

As is the case with the Mr. Nice strain, the Remedy strain is another heavily indica-dominant strain (75:25). It is a firm favorite among medicinal cannabis smokers and is used to treat a whole host of conditions, from stress and anxiety to headaches and migraines. Based on reviews of this strain by women with PCOS, it also very good at alleviating the symptoms associated with that condition too.

The Granddaddy Purple strain, often affectionately referred to as Granddaddy Purps, is the creation of the modern-day “Medicine Man,” Ken Estes. Estes is a hugely popular figure and a renowned and respected cannabis breeder, who has overcome huge challenges in his life.

In 1976, when Estes was just eighteen years old, he was involved in a horrific motorcycle accident which left him paralyzed from the waist down. While recovering from his injuries, Estes befriended a group of Vietnam vets who shared their medicinal marijuana with him. His appetite returned, and he found new strength and a drive to focus his energy on healing his mind, body, and soul.

The rest, as they say, is history. Estes ultimately went on to become the famous cannabis breeder he is today, and Granddaddy Purps is undoubtedly the strain he is best known for.

The Granddaddy Purple strain is a highly potent cannabis strain, which can contain THC levels as high as 23%. Novice smokers should tread lightly with this one as its effects are pretty powerful. The Granddaddy Purple strain is best suited for evening or night time use as its indica effects are so strong that it usually makes consumers of this strain sleepy. An initial euphoric buzz tends to fade into a deep body melt, leaving you feeling extremely relaxed and potentially couch-locked if you overindulge.

Granddaddy Purps can help relieve the symptoms of a wide variety of conditions, including PCOS. It is commonly used for pain relief but is also great for reducing the negative effects of both stress and depression. The Granddaddy Purple strain is also an excellent strain for enhancing appetite and is popular with people with insomnia due to its soporific effects.

A reviewer of the Johnny’s Tonic strain wrote about the effect it had on her PCOS symptoms:

“I have PCOS that causes incredibly bad cramps, nausea, and dizziness. This not only lessened all my symptoms but gave me the energy I needed to continue about my day!”

As well as relieving the symptoms of PCOS, Johnny’s Tonic also has a mood-boosting and energizing effect. Smokers of this strain say that it does not affect their ability to focus on everyday tasks either, making it suitable for daytime use. If you have PCOS, this strain may be the “tonic” you need.

This indica-dominant strain is a notorious creeper, which means that its effects kick in more slowly than your average strain. Be warned though, when they do; they hit home hard. This strain has a high THC level (around 22% on average) which some novice or medicinal smokers may find too strong.

If you intend on treating your PCOS symptoms with this strain, it is suggested that you start off slowly, taking just a little, and waiting for the effects to kick in.

The Death Star strain produces a euphoric high and a feeling of deep relaxation. This strain also has a soporific effect and is a firm favorite among insomniacs to help them get some much-needed sleep. Naturally, this strain is better suited to evening or nighttime use.

Final Thoughts About Marijuana and PCOS

The strains listed in this article are the ones recommended by sufferers of PCOS in their reviews of these strains. These strains were the ones that women with PCOS found the most beneficial at alleviating the symptoms of their condition. It is important to be aware that some of these strains have higher THC levels and are more potent than others. If you intend on using any of these strains to treat PCOS, then try taking a little first to see if it helps improve your symptoms rather than overindulging.