I recently listened to a series of podcasts by famed motivational speaker Tony Robbins. While he made a lot of great points, he was wrong about one thing. He suggested that ‘too many people sleep their lives away,’ yet research shows that he is inaccurate. According to data from a Global Relaxation Report in 2018, 51% of the world’s adult population gets less sleep than they need.

An incredible 80% of adults use the weekend to make up for lost sleeping time! The United States ranked #4 in sleep-deprived nations, with 58% of adults failing to get enough sleep. Incidentally, the UK ranked #1, as 63% of British adults do not get the requisite level of sleep.

Back in America, 25 million adults have obstructive sleep apnea, and 35% report getting less than seven hours of sleep every 24 hours. 30% of Americans report short-term issues with insomnia, while 10% of the adult population has chronic insomnia.

We could bombard you with facts and figures, but one thing is obvious: Most of us need assistance when it comes to sleeping.

It is often falsely assumed that using cannabis will make you feel sleepy. In reality, some strains ARE potentially extremely effective as a sleep aid, but others provide you with energy. The latter strains are used in the morning, and some people swap their cup of coffee for an energizing joint!

Therefore, finding the best strains for sleeping is essential. Today, we look at the science behind cannabis and sleep, check out some studies, and provide you with five marijuana strains that could help you get to sleep.

The Science Behind Cannabis & Sleep

The relative lack of research into marijuana has resulted in people jumping to conclusions. It has long been assumed that sativa strains give you energy, and indica strains help you sleep. While it is true that pure indicas and indica-dominant hybrids are more likely to cause full-body relaxation, the reason could be due to the concentration of cannabinoids and terpenes, rather than simply being an indica or sativa strain.

There are around 200+ terpenes found in the marijuana plant. The ones believed to best aid sleep include myrcene, limonene, linalool, terpineol, and caryophyllene. It so happens that indica-dominant strains tend to have high concentrations of these terpenes, which may explain why they provide a relaxing and sedative effect.

What Do the Studies Say?

Studies into marijuana’s effects on sleep have provided conflicting results. Most pertinently, there is evidence that insomnia could be a withdrawal symptom when you quit using the herb. A study by Budney et al., published in The American Journal of Psychiatry in January 2015, found that up to 76% of regular cannabis users reported poor quality sleep once they quit.

Make sure you check certain sites when they cite studies. One website, which we won’t name, claimed that a study by Budney et al., published in the Journal of Abnormal Psychology in August 2003, showed that the withdrawal effects when quitting cannabis last for 45 days.

In reality, the study looked at 18 cannabis users who smoked as normal for five days and abstained for the next 45 days. Symptoms such as sleep problems became apparent within three days, with peak effects from days 2 to 6. The study clearly states that “most effects lasted 4-14 days.” Still a problem, but not as bad as anti-marijuana sites like to claim.

A study by Gorelick et al., published in The American Journal of Addiction in August 2013, looked at the sleep patterns of 13 chronic daily cannabis smokers. The subjects consumed oral THC doses of 20mg each time around the clock for seven days. They consumed between 40mg and 120mg of THC each day.

Numerous studies have looked into marijuana’s ability to combat conditions that could prevent us from sleeping. Cannabis could promote better breathing (great news if you have sleep apnea), and reduce the time spent in REM (a good thing if you have PTSD and suffer from nightmares).

It isn’t all good news, though. Long-term loss of REM sleep may cause issues such as memory impairment. Also, using cannabis before the age of 15 could result in sleep problems as an adult.

Side effects of nighttime marijuana use include grogginess the next day, dry mouth and increased appetite.

Nonetheless, for an increasing number of people, marijuana is a much better option to help aid a good night’s sleep than sleeping pills or other forms of prescription medication. Below, we look at five great cannabis strains for a decent night’s sleep.

This marijuana strain is praised for its analgesic properties. It is a balanced hybrid (although the indica side shines through) that’s a cross of SFV OG Kush and OG Kush, possibly mixed with Afghani. It has minimal CBD, and its THC content can hit as high as 25% – more than enough for the experienced user. 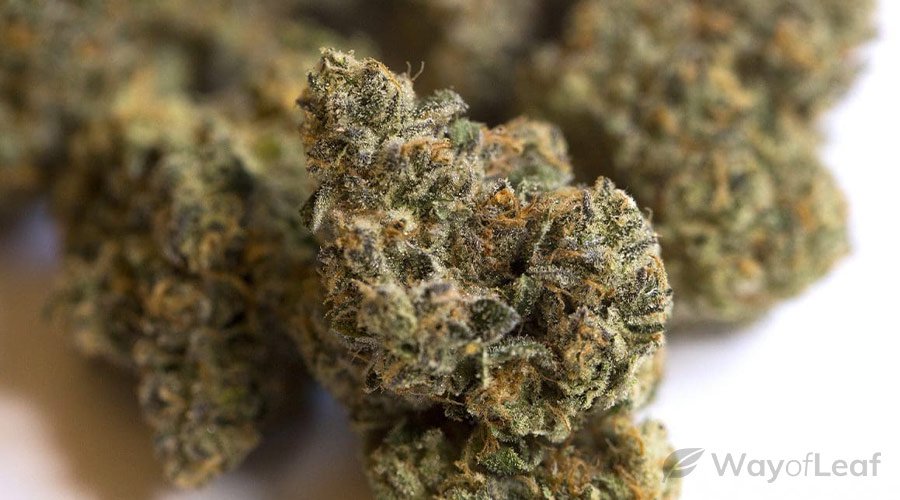 Tahoe OG Kush is one of the strongest members of the Kush family. If you are familiar with the effects of OG strains, the high provided by this strain will make you feel right at home. It’s extremely relaxing and makes you feel as if you are wrapped in a warm and comfortable blanket.

If you are feeling a little down after a rough day, Tahoe OG Kush is capable of lifting your spirits. You should feel euphoric and happy soon after using it, and if you want to eat dinner but find that your appetite isn’t the best, this strain can also help. Once you have satiated your hunger, the next step is to find a relaxing spot on your bed, close your eyes, and go to sleep.

Another member of the Kush family, this strain is a huge favorite on the West Coast. It is an almost pure indica that’s a cross of a Purple Afghani and Hindu Kush. Purple Kush is known for its sweet taste. It has a THC content of 22% and a CBD level that’s usually less than 0.1%.

The sedative properties of Purple Kush are helpful, but it is this strain’s ability to relieve pain that helps it stand out. The National Sleep Foundation says that only 37% of Americans with chronic pain report good or very good sleep quality. Pain triggers poor sleep.

If aches and pains keep you awake at night, try Purple Kush an hour or two before bed. It gets to work fairly quickly and causes you to feel utterly sedated. Once the warm, fuzzy feelings take over, you will be ready to unwind; and as the effects last for hours, even individuals with chronic pain should find sleep almost impossible to resist.

Be warned; this strain is a heavy hitter and should only be used close to bedtime! God’s Gift is a heavily indica-dominant strain that’s a cross of OG Kush and Granddaddy Purple. It is believed to have been bred in California, although no one is completely sure. It was probably used on the West Coast in the mid-1990s, and its THC content of 27% is sure to impact even users with a high tolerance.

It doesn’t take long for God’s Gift to take hold. You will be taken aback by just how potent this strain is as it provides a relaxing full-body high that makes it almost impossible to move.

Users report feeling happy, and it isn’t unusual to suddenly burst out in fits of giggles for no particular reason.

Most pertinently, God’s Gift can help you sleep. Users have reported having a few tokes on the couch and waking up many hours later without realizing what happened! It is the ideal strain to help you chill out after a hard day at work. Not only does it help you handle insomnia, but it also ensures you go to bed with a smile on your face.

Once again, this is a strongly indica-dominant strain that’s a cross of OG Kush and Critical Mass. It should be obvious by now that the Kush family is your ‘go-to’ collection for better sleep. Critical Kush was bred by Barney’s Farm Seeds and its THC content of 25%, versus its 1% CBD, means it isn’t a strain for the novice.

The phrase ‘couch lock’ has become synonymous with Critical Kush. We recommend using this strain close to bedtime because its effects hit you hard and fast. The high begins with a feeling of happiness, but it doesn’t take long for your entire body and mind to succumb to the siren call of sleep.

While you may feel invigorated in the early stages of the high, and may even become more talkative than usual, these effects don’t last. Soon enough, you may be giggling at things that aren’t even funny and feel wrapped in a haze. If you use a large dosage of Critical Kush, expect to wake up several hours later!

If a person is only able to name one marijuana strain, chances are Northern Lights is the one they know. It is one of the most famous strains of all time and is known for its relaxing properties. Northern Lights is a strongly indica-dominant hybrid that’s a cross of a Thai Sativa and an Afghani Indica.

By the standards of modern cannabis, Northern Lights isn’t especially strong, with just 18% THC. It has been used in the U.S. since the mid-1980s and may be one of the most used types of cannabis in history. While its THC content is ‘only’ on the higher end of moderate, this strain is renowned for being fast-acting.

Users are often delighted by the smoothness of the smoke and soon feel compelled to relax as the Northern Lights high grabs them. The potent cerebral high lures you to a comfortable place and keeps you there for hours. This strain makes you feel good about life and helps melt away stress and anxiety, two common barriers to a great night’s sleep.

A lack of sleep can do a lot more damage to your life than merely making you feel grumpy and irritable. Did you know that fatigue is linked to over 100,000 automobile crashes and over 1,500 crash-related deaths in the United States alone each year?

Sleep deprivation can even lead to serious health issues such as stroke, diabetes, heart disease, high blood pressure, and heart attacks. It is estimated that 90% of people with insomnia also have another health condition! Lack of sleep hurts your sex drive, slows your thinking, ages your skin, increases the risk of depression, and increases the risk of unwanted weight gain.

Therefore, if you have problems sleeping, you must do everything possible to rectify the situation. If you have tried altering your sleep pattern, avoided the ‘blue light’ from electronics at night, and attempted to establish a healthy bedtime routine but still can’t sleep, marijuana could be the answer.

Research is divided on the subject, but countless individuals swear by the herb as an effective sleep aid. If you decide to try it for yourself, do so with caution, and make sure you begin with a very small dose to see how it affects your body and mind.

Cannabis Use Disorder: What Is It & Can CBD Help?

Is CBD the answer?