Written by Dr. Mike Bohl
5 min read
20 comments
Video
Read Later
All information on this website is for general informational purposes only and is not intended or implied to be a substitute for professional medical advice, diagnosis or treatment.

Cannabis and obesity is a topic not often discussed. Which is odd, considering that cannabis is known for causing the munchies.

To get one thing clear from the start, there is no such thing as the “best marijuana strains to lose weight.” While cannabis may indeed hold potential in helping to increase metabolism and lower BMI (more on that later), there is no clinical research on the topic of using specific cannabis strains for obesity and weight loss.

There is, however, research on the general topic of cannabis and its relationship to weight and obesity. In this article, we discuss relevant published studies and highlight several strains that may be of interest to those looking to use cannabis as a means to improve daily health and wellness.

Frightening Statistics on Obesity in the U.S.

According to the Centers for Disease Control and Prevention (CDC), over 40% of U.S. adults struggle with obesity.

Indeed, many agree with the notion that obesity in the U.S. is now a pandemic. Much of this relates to the standard American diet and lifestyle, but what are folks doing – and what can they do – to help curb obesity? Is cannabis a practical option?

Based on research, the use of cannabis may help with obesity and weight loss in terms of influencing mechanisms related to metabolism.

Before we get into that discussion, however, let’s take a look at what obesity is.

Before We Get to the Cannabis Strains, What Is Obesity?

In general, the balance between calorie intake and energy expenditure determines a person’s weight. Therefore, the most common cause of obesity is a lack of physical activity combined with overeating.

With that being said, there are additional factors associated with obesity. Here are a few of the most common ones:

A person is more than likely to develop some type of obesity if one or both parents are obese.

Research has suggested a possible relationship between lack of sleep and obesity. However, more research is needed to determine the exact physiological mechanism(s) responsible for this relationship.

Again, obesity is largely the result of a simple imbalance between energy intake and expenditure. People who consume a lot of calories (or even an average amount of calories) without engaging in activity to burn them off are more likely to develop obesity or gain excess weight. 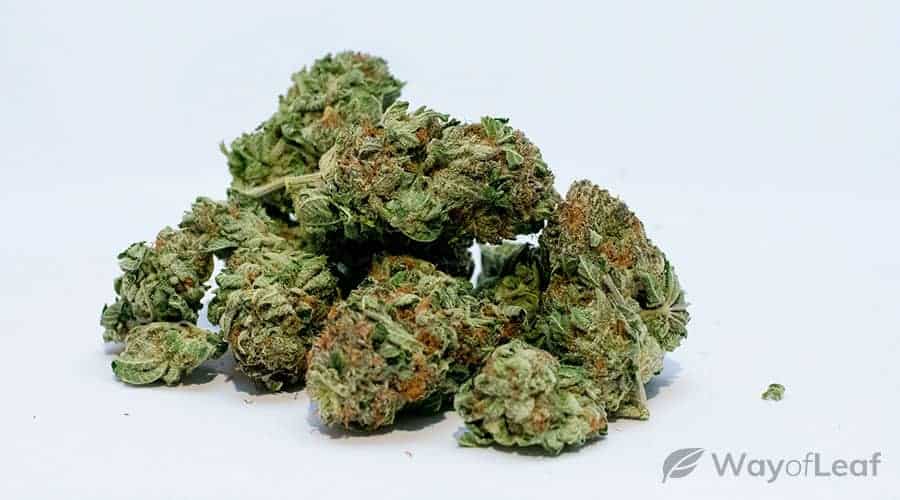 Unfortunately, the increasingly sedentary lifestyle of many individuals is cause for concern regarding obesity. Whereas once individuals had to physically move their body to complete even the most mundane of daily tasks (i.e., cleaning the house, going out to buy food, etc.), much of this is seemingly becoming a thing of the past.

For some people, overeating can be triggered by mental health disorders. Binge eating is now considered a specific type of eating disorder. While the cause of binge eating is unknown, it may largely relate to stress, depression, and anxiety – all of which are on the rise, according to Harvard Health & Medicine. 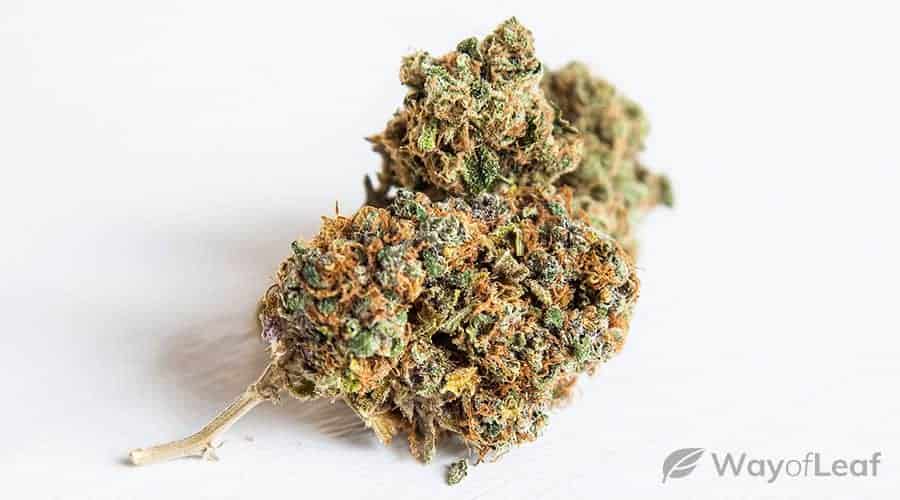 As we just discussed, obesity can be caused by a number of different factors – most of which are combined with overeating. Interestingly, it appears that cannabis users weigh less in general than non-cannabis users. This, of course, is odd, especially considering that cannabis is known to cause the munchies.

In a recent study published in Cannabis and Cannabinoid Research, scientists concluded that cannabis “may be a better option for weight loss than surgery or pharmaceuticals.”

“Cannabis ‘may be a better option for weight loss than surgery or pharmaceuticals.'”

Their conclusion was based on observations that THC works to downregulate CB1 receptors in the endocannabinoid system (ECS), leading to reduced obesity rates.

As far as why downregulation of CB1 results in decreased rates of obesity – despite increased caloric intake – authors of the study theorize that “rapid and long-lasting downregulation of CB1R … reduces energy storage and increases metabolic rates, thus reversing the impact on [BMI] of elevated dietary omega-6/omega-3 ratios.”

In other words, despite the increased consumption of calories, it appears that THC consumption results in lower BMI via increased metabolic rates. 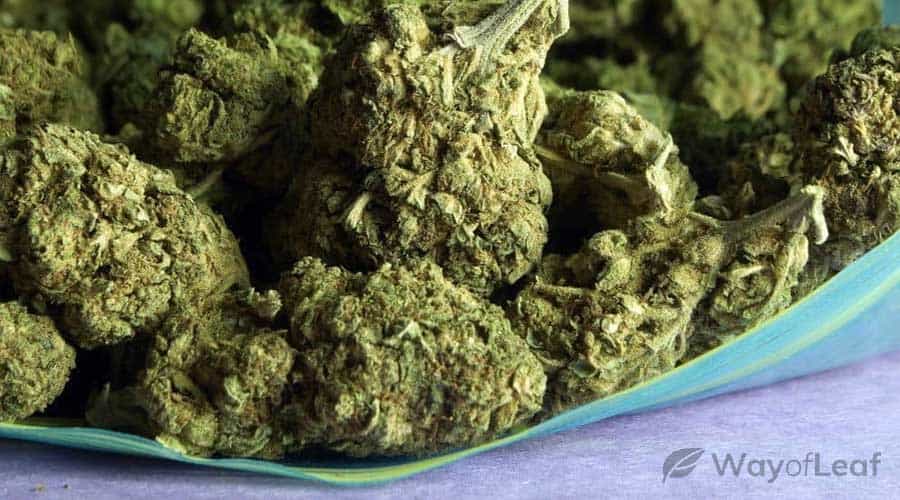 However, there is no current research on using specific cannabis strains for weight loss or obesity.

Based on the above-cited research discussing THC’s role in increased metabolic rates and downregulation of CB1, here are several of our favorite high-THC cannabis strains.

The following should NOT be mistaken as a “list of the best marijuana strains for obesity.” Research suggests that THC may play a role in decreased BMI, and therefore decreased rates of obesity. The following are merely several of our team’s favorite all-time picks for high-THC cannabis. 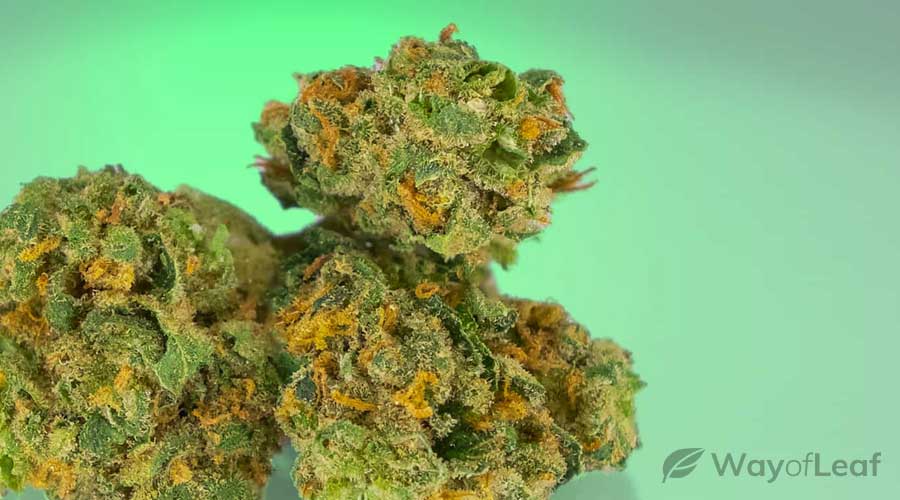 This popular strain from South Africa has been a favorite high-THC cultivar for years. Often regarded as a powerhouse marijuana strain, THC levels frequently reach as high as 26%. The resulting high is immensely potent and cerebral, meaning Durban Poison is unsuitable for inexperienced cannabis users. 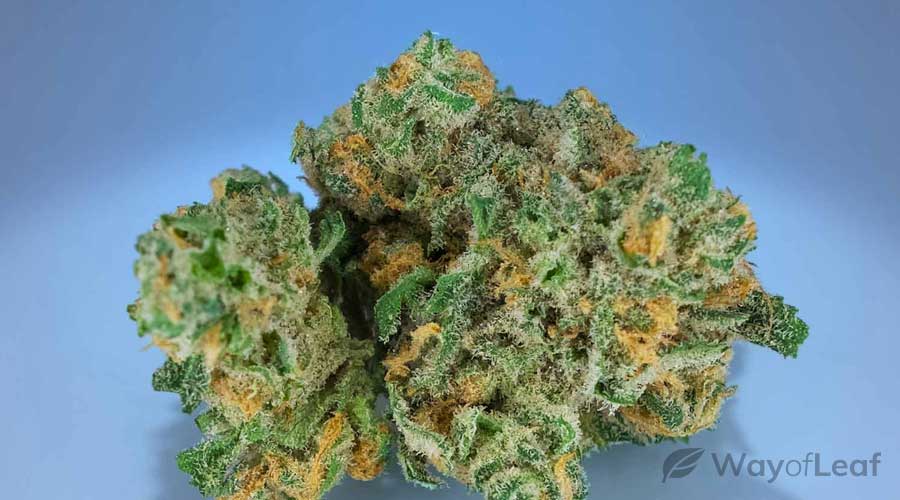 Another increasingly popular high-THC strain is the sativa-dominant hybrid Blue Dream. This cross between the sativa strain, Haze, and the indica-dominant hybrid, Blueberry, is known for offering a range of potential medical uses. It can also help keep users motivated and focused and even provide a boost of sativa-inspired energy.

The Grapefruit strain, known as an energetic and joy-inducing stress reliever, reportedly can contain a THC content of between 20-25%. Also, most phenotypes boast roughly a 70:30 percent sativa/indica ratio, which potentially could help with a wide variety of medical conditions while making you feel active and motivated. 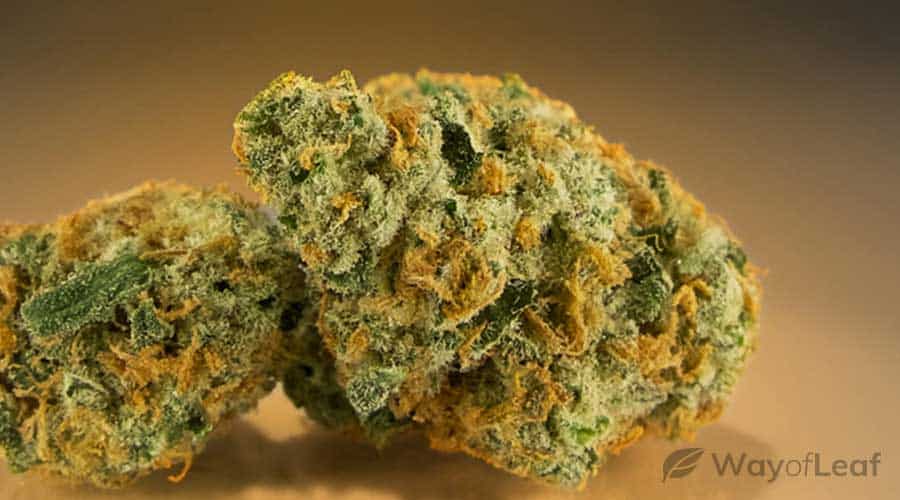 As we mentioned above, one of the potential culprits of obesity is lack of sleep. Northern Lights is an iconic indica marijuana strain that is known to help aid sleep. It provides a relaxed body high and a feeling of intense sedation that can work wonders in terms of facing difficulties falling asleep for many users. With Northern Lights, it is essential to achieve the right level of dosing; if you get it right, however, you’ll likely experience a good night’s rest.

Cherry Pie is a cannabis strain that tastes as good as it sounds. For users wanting a delicious strain that’s a genuine joy to consume, Cherry Pie is an indica-dominant hybrid that frequently contains up to 26% THC. It is often used among medical cannabis patients and is widely available in medical and recreational dispensaries across the U.S.

9
5 min read
Join The Discussion
TOC
Premium
Your subscription has ended
If you love cannabis and want to support our site, join WayofLeaf Premium today and unlock
Best of all, part of your membership fee will go towards supporting the fight to legalize cannabis.
Sign Up for WoL Premium
Not now
I already have an account
×
Log in to Your Premium Account