Medically reviewed by Lynn Marie Morski, MD, Esq.
Written by Editorial Team
6 min read
6 comments
Read Later
All information on this website is for general informational purposes only and is not intended or implied to be a substitute for professional medical advice, diagnosis or treatment.

There is evidence to suggest that marijuana could help reduce the impact of an alcohol hangover. However, there is also research indicating that cannabis could cause a hangover. Anecdotal reports suggest that a cannabis hangover is different from its alcohol equivalent.

A cannabis hangover is generally less unpleasant than an alcohol one. However, it can include symptoms such as headaches and brain fog. This article looks at other symptoms and causes and analyses research into this oft-disputed phenomenon. It also offers tips on getting rid of a cannabis hangover and advice on preventing it from happening.

What Causes a Weed Hangover?

The most likely cause of a marijuana-related hangover is excessive consumption of the substance. Much like alcohol, determining what represents overconsumption is tricky due to the plant’s different effects on people. It is the impact of THC, the most abundant intoxicating cannabinoid in cannabis, that is of the greatest significance. 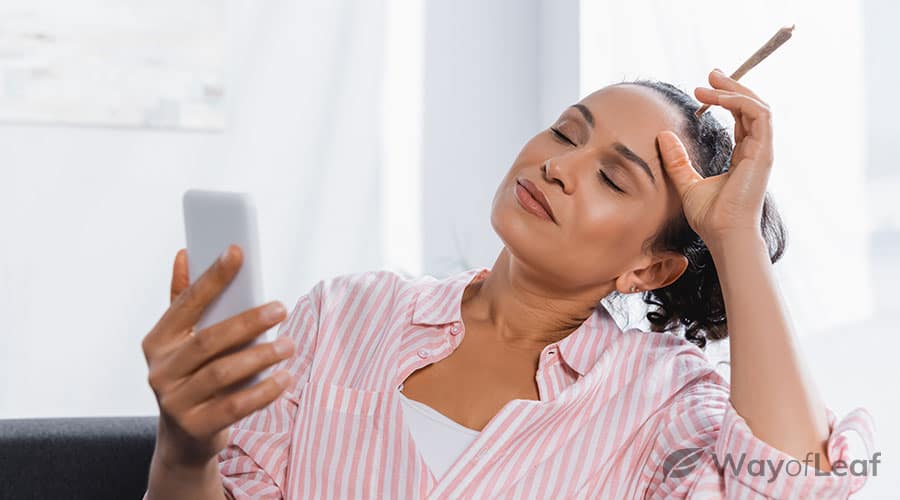 People who report having a hangover after cannabis use say they feel the effects the following day.

THC tolerance varies from one person to the next. This is due to factors such as body weight, metabolism, and experience in using the substance. However, it is the overuse of THC that seems to result in weed hangovers. In general, this issue appears to affect users of ultra-high THC cannabis concentrates more than smokers.

People who report having a hangover after cannabis use typically say they feel the effects the following day.

What Are the Symptoms of a Marijuana Hangover?

Cannabis users who report experiencing a hangover claim they have the following symptoms:

Can You Get a Delta-8 Hangover?

When you read about THC, the vast majority of the information relates to delta-9 THC. It is the main form of the compound found in marijuana. However, there are many other types of THC, and delta-8 is becoming extremely popular. D8 causes intoxication like D9 but is significantly less potent. Because of this, it is fast becoming an option for marijuana novices and individuals with a low THC tolerance.

Estimates vary, but it is believed that delta-8 is about half as intoxicating as delta-9. Therefore, in theory, you would need to consume at least double the amount of D8 to get similar effects. This makes it less likely to cause excessive intoxication or produce an unpleasant hangover effect. Proponents of delta-8 suggest it is less sedating and less anxiety-provoking than delta-9.

Related article
How Long Does Delta 8 Stay in Your System?

There is little research into delta-8 THC’s capacity to combat cannabis hangovers. However, a 1995 study published in Life Sciences found that the cannabinoid was an effective antiemetic when used in children with hematologic cancers.

If you’re interested in using delta-8 to reduce the effects of marijuana hangovers, its legality could prove a stumbling block. A growing number of states have banned the compound due to a lack of regulation. Check out your state’s laws before considering a D8 purchase.

What Do Studies Say About Marijuana Hangovers?

There are relatively few studies on whether cannabis can cause a hangover. This is primarily down to the plant’s prohibited status.

A small study published in Drug and Alcohol Dependence in 1985 analyzed hangover effects on 13 male cannabis users. The researchers found that the acute effects of cannabis could lead to a hangover. Marijuana use resulted in significant changes in CO level and heart rate. It also greatly impacted behavioral tasks such as time production, free recall, and card sorting. 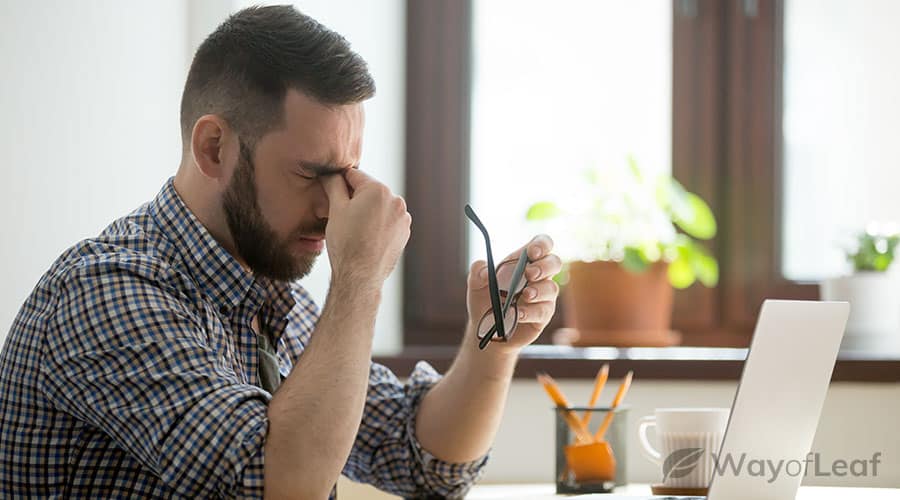 A study published in the Journal of Developmental & Behavioral Pediatrics in 2015 recommended that doctors discuss the hangover effect of cannabis with MMJ patients. The paper pointed out that this effect lasted for a minimum of a day after using the substance.

A study published in the Pain journal in 2017 looked at how people with chronic pain felt after using cannabis. MMJ patients admitted to having a feeling of fogginess and non-alertness in the morning. However, the researchers failed to outline how many volunteers felt these effects.

How Can I Tell It’s a Weed Hangover?

Many cannabis users think they have a hangover when they feel a little unusual after trying the substance. Using alcohol or other drugs with marijuana could have an impact on how you feel the next day.

If you are a regular user and abstain for a while, you could be experiencing the effects of withdrawal. If the hangover feeling happens a few hours after using cannabis, it might be that you’re feeling the lingering effects of THC. Bear in mind that a cannabis high can last for several hours. If you use edibles, they could have an impact for at least 8-10 hours.

Therefore, the hangover effect you feel isn’t necessarily due to marijuana consumption. For instance, there’s a chance the symptoms are due to alcohol if you use it in conjunction with THC. An alcohol hangover’s effects can include:

That being said, individuals who have experienced both types of hangovers claim they can differentiate between them.

Many cannabis users find a hangover is more likely after using THC concentrates or edibles. This is due to the extremely high levels of delta-9 THC in these products. You’re far less likely to suffer the effects of a weed hangover after smoking marijuana flower unless the strain is extremely potent.

Therefore, it is possible to experience a cannabis hangover if you ate an edible, didn’t consume alcohol, and the symptoms are apparent the morning after, for example.

How to Combat Weed Hangover Symptoms

In general, a cannabis hangover goes away by itself. But waking up feeling foggy and finding it hard to focus isn’t the best way to start a day. Here are a few things you can try to see if you can alleviate the symptoms:

Jump in the Shower: After getting up, have a shower right away. Switch between hot and cold water. The cold water can awaken the senses, while steam from hot water opens the airways.

Have Breakfast & Hydrate: Consume whole-grain carbohydrates, a lean protein source, and healthy fats. It is also a good idea to have a couple of glasses of water.

Get Your Caffeine Fix: A cup of tea or coffee could help give you a short-term boost in alertness.

Use CBD: There is evidence that CBD could help counteract some of the negative effects of THC.

Consider Ginger Tea: If you have nausea, a cup of ginger tea with lemon and honey might help settle your stomach.

Use a Painkiller: If you have a headache and the CBD doesn’t work, you could try an OTC analgesic.

Move Around: Go for a walk or embark on some gentle exercise to shake the cobwebs off. The release of endorphins will also likely help you feel better.

How to Cure a Weed Hangover – Try Prevention!

Prevention is better than cure! If you’ve experienced the effects of a marijuana hangover, you may want to avoid repeating the experience. Here are some handy tips:

Use Cannabis in Moderation: The main reason you get a hangover is due to excessive consumption. Also, review the THC content of the strain you use, and consider something less potent.

Don’t Mix with Other Drugs: Typically, you can expect a hangover effect to be worse if you mix cannabis with alcohol or other drugs.

Reduce Consumption Frequency: Try to avoid using cannabis several days a week. Over time, you will build up a tolerance to THC and become dependent on it. Trying to go sober will inevitably lead to withdrawal symptoms in this situation.

Incidentally, if you regularly experience cannabis hangovers, it is possibly a sign of misuse. Other things to watch out for include:

Please note that the above does NOT represent medical advice. If you want to learn more about reducing the impact of THC side effects, schedule a consultation with a medical professional.

Does Weed Give You a Hangover? Final Thoughts

Whether cannabis hangovers even exist is a matter of debate. There is research that outlines the potential for the substance to cause hangovers. Symptoms can include feeling groggy and confused the morning after using marijuana. However, other studies have found no evidence of a hangover effect after consuming cannabis.

If you experience a cannabis hangover, try to reset your body and mind with a shower and a nutritious breakfast.

Nonetheless, there is a huge level of anecdotal evidence that suggests weed hangovers are real. If this is the case, the most likely reason is due to overconsumption of THC, the cannabinoid in marijuana that causes intoxication. If you experience a cannabis hangover, try to reset your body and mind with a shower and a nutritious breakfast.

Users can avoid having future hangovers by using marijuana responsibly.

Related article
How Long Does Marijuana Stay in Your System? [Fully Explained]