For decades, there has been an ongoing discussion regarding cannabis and infertility. Numerous anecdotal outlets have cited decreased fertility rates among cannabis users (especially a decline in sperm count in males), but is there any clinical or scientific evidence to back up these claims?

In this article, we discuss relevant contemporary research relating to the topic. We’ll also discuss whether “marijuana infertility” is truly a concern. Read on to find out more.

Does Marijuana Cause Infertility?

There is a body of evidence suggesting that marijuana causes infertility. However, even more concerning is relatively recent research that suggests that fertility, especially in males — may be declining overall.

A study published in Human Reproductive Update in 2017 identified a potentially key issue. It looked at 7,500 studies performed from 1973 to 2011. The researchers found that men from Australia, New Zealand, Europe, and North America had an almost 60% decline in sperm count. They also had a sperm concentration decline of 52%. 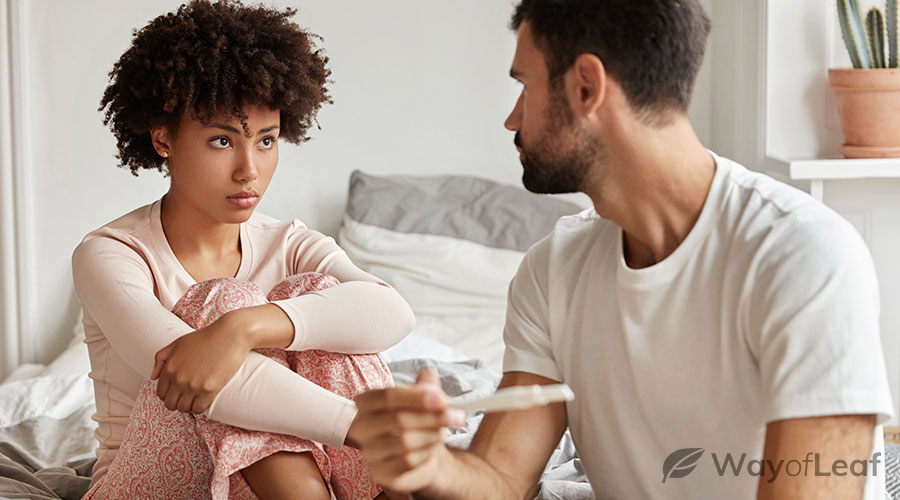 Researchers offered several hypotheses attributed to the decline in semen quality. These include:

A major underlying concern, particularly given evidence that cannabis use is on the rise (as well as evidence that smoking tobacco affects fertility), is whether or not marijuana causes infertility. Another is whether cannabis use may have a variable impact on males’ and females’ fertility and reproduction potential.

Potential Impact of Cannabis Use on Female Fertility

Data regarding the relationship between female infertility and marijuana use is limited. However, a study published in the Journal of Women’s Health in 2016 suggests that smoking cannabis can delay a woman’s ovulation by several days.

Furthermore, a separate study published by the National Institute on Drug Abuse suggests that cannabinoids can alter hormone secretion related to reproductive function. Authors suggest that cannabinoids, specifically THC, can “inhibit secretion of LH, FSH, [and] prolactin,” resulting in “decreases in sex steroid hormones [as well as] changes in ovulation.”

However, the researchers observed that these effects are reversible when cannabis use is ceased.

Still, most experts recommend that pregnant women and women who are considering becoming pregnant – avoid the use of cannabis altogether both during and before pregnancy. This recommendation is more pressing than ever, as cannabis use among young reproductive-aged women is rising.

In fact, according to currently available statistics, upwards of 8% of non-pregnant reproductive-aged women use cannabis on a relatively consistent basis. As authors of the above publication observe, “prenatal marijuana exposure [can be] associated with poor offspring outcomes,” including an increased prevalence of conditions like low birth weight and impaired brain development.

What About Male Fertility? Does Cannabis Reduce Sperm Count?

Another pressing concern – and an ongoing topic of debate circulating for decades – is whether or not marijuana can cause male infertility.

A study published in the American Journal of Epidemiology in 2015 appears to suggest that it can. The study observed over 1,200 Danish men aged 18-28, 45% of which had smoked cannabis in the previous three months. Twenty-eight percent of study participants used marijuana more than once a week. The study discovered that those who used cannabis regularly had a 29% reduction in sperm count.

However, a study published in Human Reproduction in 2019 appears to contradict the research above. This study, which took place over 17 years from 2000 to 2017, examined 1,100 semen samples from male patients enrolled in the Massachusetts General Hospital Fertility Center. The study found that cannabis users had a higher sperm count per milliliter of ejaculate (62.7 million sperm compared to 45.4 million in non-cannabis users). Only 5% of cannabis-using test subjects had sperm count levels considered low (below 15 million per milliliter).

Based on the availability of contemporary research data, the impact of cannabis use on male fertility is still largely inconclusive.

Additional Research on Weed and Infertility

Another interesting publication on the broader topic of weed and infertility appeared in 2018 in the peer-reviewed academic journal Fertility and Sterility.

In the study, researchers analyzed nearly 2,000 male and female participants that were trying to conceive. Eleven-and-a-half percent of women admitted to using cannabis during this period, along with 16.5% of men. The study results suggested that cannabis use did not have a negative impact on the time it took for couples to become pregnant.

Again, however, it is highly recommended that cannabis use be avoided among individuals trying to conceive.

Bottom Line on Marijuana and Infertility

The general discrepancy in the observations made from these above-referenced studies means we can’t draw any firm conclusions regarding the ongoing debate of marijuana and infertility. Without a doubt, more research needs to be done on the topic.

Unfortunately, there are still challenges associated with carrying out quality cannabis-based research.

At present, cannabis is only fully legal (on a national level) in Canada and Uruguay. This means that federal research funding for cannabis studies is still difficult for many global research organizations.

Regardless of whether or not marijuana causes infertility, it is best to avoid the consumption of cannabis altogether for those trying to conceive. Likewise, pregnant women should always steer clear of any form of cannabis use.