Patients recovering from a stroke need all the help they can get. And with cannabis use becoming more widespread, many may turn to it for symptomatic relief.

But does cannabis help stroke recovery, or does it do more harm than good? Here’s what the existing research has to say.

What Is a Stroke?

Before we dive into how cannabis affects stroke recovery, we need to understand how a stroke impacts the body. 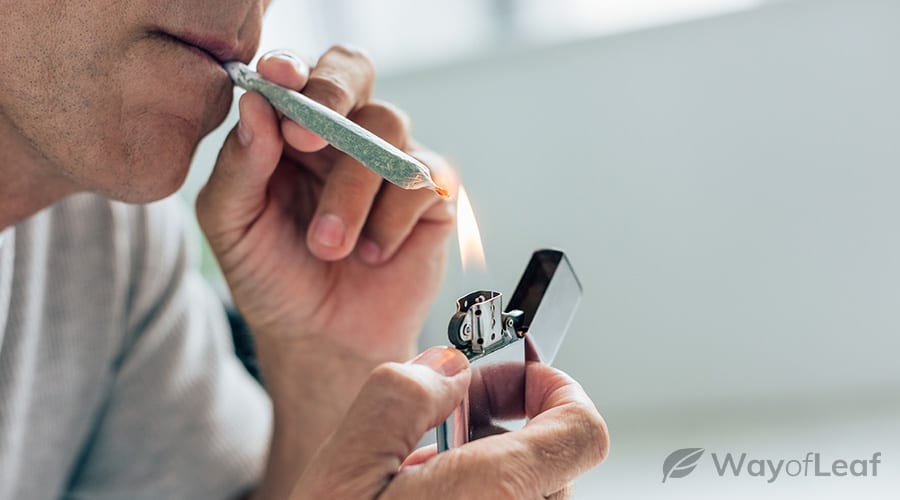 It is also possible to have a mini-stroke or transient ischemic attack (TIA). This is a temporary interruption to the brain’s blood supply lasting between a few minutes and 24 hours.

Although TIAs usually resolve by themselves, they are a strong predictor of experiencing a full stroke in the near future. The risk is around 17% in the first 90 days following a TIA.

When a person has a stroke, the brain is starved of oxygen and nutrients. Therefore, strokes can result in permanent brain damage, disability, and death.

Those who survive often have to contend with long-lasting complications that severely impair their quality of life. The nature and extent of these complications will depend on where in the brain the stroke occurred.

Get Our Free eBook on How to Relieve Pain Naturally

Millions of people are turning away from prescription drugs and shifting their attention to natural remedies such as cannabis, psychedelics, ketamine, and MDMA. WayofLeaf is dedicated to educating readers about the remarkable pain-relieving remedies of natural alternative therapies. Our free eBook teaches readers how various substances are revolutionizing healthcare – download it now for free using the link below:

There is a range of long-term stroke complications, and they vary from patient to patient. Some of the most common issues include:

People who have strokes are also at high risk of having another one or suffering from other cardiovascular diseases.

The risk of having a stroke increases with age. Other contributing factors may include:

It is usually possible to reduce the risk by eating a healthy diet, exercising regularly, reducing alcohol consumption, and not smoking.

It is essential to get treatment as soon as possible after a stroke occurs. The longer the brain’s blood supply is cut off, the higher the risk of serious complications and death.

In the early stages, doctors will administer medicines to break up blood clots and, in some cases, surgery may be necessary. After this, patients usually take a variety of drugs to control blood pressure and cholesterol, reducing the risk of another stroke.

Treatment for stroke complications will depend on the individual patient’s symptoms. It usually involves rehabilitation, including physical therapy, speech therapy, and occupational therapy.

Doctors may also prescribe medication to control symptoms such as pain, spasticity, or bladder problems.

With more states now legalizing cannabis for medical use, stroke survivors may be wondering whether it can provide some relief.

Research suggests that cannabinoids such as THC and CBD could have several benefits following a stroke. However, it is essential to note that most studies to date are animal experiments rather than human clinical trials. Therefore, it is necessary to interpret the results with caution.

That said, a 2014 review for the Journal of Cerebral Blood Flow & Metabolism suggests that cannabinoids are “promising candidates for future treatment.” It looked at several studies in which scientists gave THC, CBD, and other cannabinoids to animals soon after an ‘experimental stroke.’ 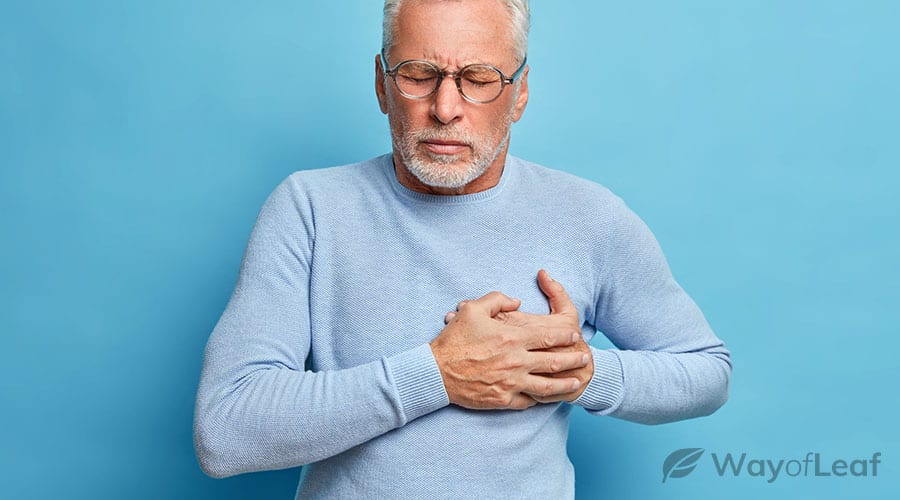 The results indicate that the endocannabinoid system plays a role in the body’s response to a stroke. Cannabinoid receptors CB1 and CB2 appear to become more active, and the release of beneficial endocannabinoids increases.

CB1 receptors seem to reduce the temperature around the site of the injury, while CB2 receptors regulate the inflammatory response. Together, these functions may reduce the size of the area affected by a lack of blood supply.

Researchers observed the most significant effects when they administered cannabinoids within 4–5 hours after the stroke. This suggests that cannabinoids may help to prevent brain damage to some extent but do not fully reverse it.

Is THC or CBD Best for Stroke Recovery?

As well as potentially reducing the degree of brain damage after a stroke, cannabis may relieve some long-term symptoms too.

In this case, patients have a choice between THC and CBD, with both cannabinoids providing slightly different benefits.

THC is the intoxicating compound in cannabis. It acts primarily on CB1 receptors in the brain and nervous system. In the world of medical marijuana, it is probably best known for its ability to relieve pain. 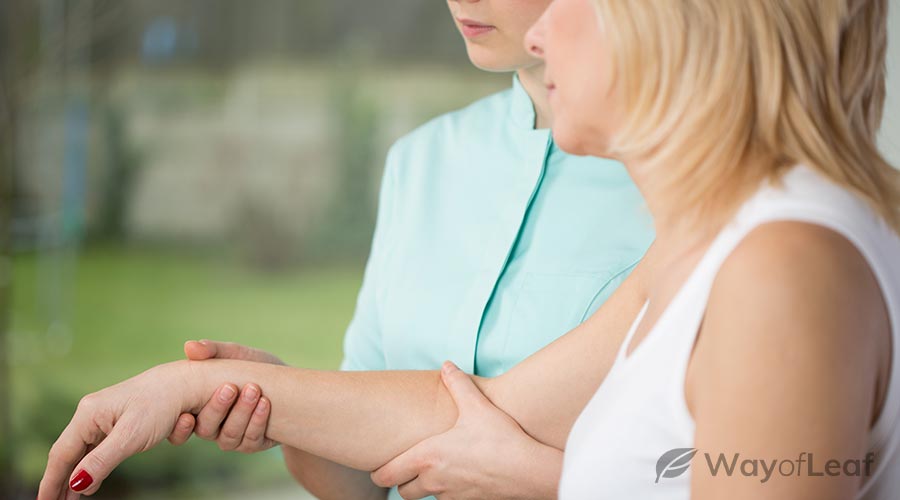 A 2012 study for The Journal of Pain investigated the effects of vaporized THC on neuropathic pain. The results showed that low to moderate doses relieved the pain by up to 30%. Higher doses increased the risk of side effects, including sedation and confusion.

THC may also help with post-stroke symptoms such as spasticity. A drug called Sativex is already licensed for spasticity in MS, a condition that causes similar symptoms to strokes. It contains a combination of THC and CBD, a non-intoxicating component of cannabis.

CBD alone may also have numerous benefits for stroke survivors. According to the National Institute on Drug Abuse, it has the following characteristics:

In comparison to THC, CBD also has the advantage of not producing a psychedelic high. Therefore, it does not impair physical or mental function, although users often report feeling more relaxed.

It is also possible to extract CBD from industrial hemp rather than marijuana. Thanks to the 2018 Hemp Farming Act, CBD is now widely available, even in states without a medical marijuana program.

The Risks of Cannabis Use in Stroke Recovery

Despite the potential benefits of cannabis in stroke recovery, there are some risks to consider too. In fact, several studies suggest that the plant can increase the risk of having a stroke. This is especially true among young, healthy people.

A 2017 report for the Journal of Thoracic Disease makes for worrying reading. It suggests recreational marijuana use raises the risk of hospitalization due to ischemic stroke by 17% in the 18–54 age group.

The report goes on to explain that cannabis has several significant effects on the cardiovascular system. They include:

Furthermore, a 2022 review found an increased prevalence of ischemic and hemorrhagic stroke among cannabis users compared with non-users. However, there was insufficient data on timing, exposure, duration, and dosage.

Therefore, more research is necessary to understand the relationship between cannabis and strokes. Whether products such as CBD oil carry similar risks remains unclear.

We urge anyone considering using THC or CBD during stroke recovery to exercise extreme caution. Consult with a knowledgeable physician and carefully weigh up the pros and cons before going ahead.

Recognizing a Stroke After Cannabis Use

It is essential to be familiar with the signs of a stroke, whether you are a cannabis user or not. Recognizing these signs in yourself or others and seeking immediate medical attention can mean the difference between life and death.

Things to look out for include:

If any of these symptoms occur, get medical help urgently. It is also important to let the first responder know if the person has been using cannabis. This information may help them to make a more accurate diagnosis.

There may be several benefits associated with using cannabis after a stroke. It could help to alleviate symptoms such as pain, spasticity, and mood disorders, while CBD may also reduce seizures.

However, research suggests that cannabis could also increase the risk of strokes. Once a person has had one stroke, they are already at high risk of another one. Therefore, extreme caution is necessary when using cannabis following a stroke.

Only large-scale clinical trials will tell us for sure whether cannabis helps or hinders stroke recovery. With the current trend toward legalization, we hope to see more conclusive evidence soon.