Medically reviewed by Dr. Sibin Stephen
Written by Natalie Saunders, B.A., LicAc
6 min read
0 comments
Read Later
All information on this website is for general informational purposes only and is not intended or implied to be a substitute for professional medical advice, diagnosis or treatment.

Nowadays, people use cannabis to address a whole range of medical conditions, including digestive issues like stomach ulcers.

There are some obvious benefits to using marijuana for digestive problems. For example, we know that cannabinoids like THC and CBD can relieve nausea and pain symptoms. But can cannabis heal stomach ulcers, or is this just wishful thinking?

Read on to find out.

What Are Stomach Ulcers?

Stomach ulcers (sometimes called peptic ulcers or gastric ulcers) occur when the stomach acid damages the lining of the digestive tract. When the mucus layer of the stomach is worn away and stops functioning effectively, the acid can damage the stomach tissue, causing the ulcer.

Stomach ulcers are a common problem and can affect people of any age.

Ulcers can occur in the esophagus or the duodenum, the upper part of the small intestine.

Stomach ulcers are a common problem and can affect people of any age. However, they are more common in men and over the age of 60.

The most common symptom of a stomach ulcer is abdominal pain. Patients describe the pain as burning or gnawing, and it usually occurs 2–3 hours after eating or at night. It usually starts in the central abdomen but can radiate to the chest, belly button, or back.

Some other common stomach ulcer symptoms include:

In severe cases, a stomach ulcer can rupture and cause internal bleeding. Seek medical attention immediately if any of the following symptoms occur:

One of the most common causes of stomach ulcers is a bacterium called Helicobacter pylori, or H. pylori for short.

When these bacteria colonize the stomach, they cause inflammation (gastritis), which can eventually lead to ulceration. H. pylori are responsible for as many as 70–90% of gastric ulcers.

Another common cause of stomach ulcers is the long-term use of non-steroidal anti-inflammatory drugs (NSAIDs). They include medications such as aspirin, ibuprofen, diclofenac, and naproxen.

People frequently use NSAIDs to reduce inflammation in and around the body and relieve muscle and joint pain. However, over time, they can irritate the stomach lining and eventually cause ulcers. The risk of ulcers increases if the NSAIDs are taken in high doses or regularly for a long time.

Some people believe that lifestyle factors such as diet and stress also contribute to stomach ulcers, although evidence is limited. However, things like spicy food, alcohol, and smoking irritate the stomach and could well aggravate pre-existing issues. 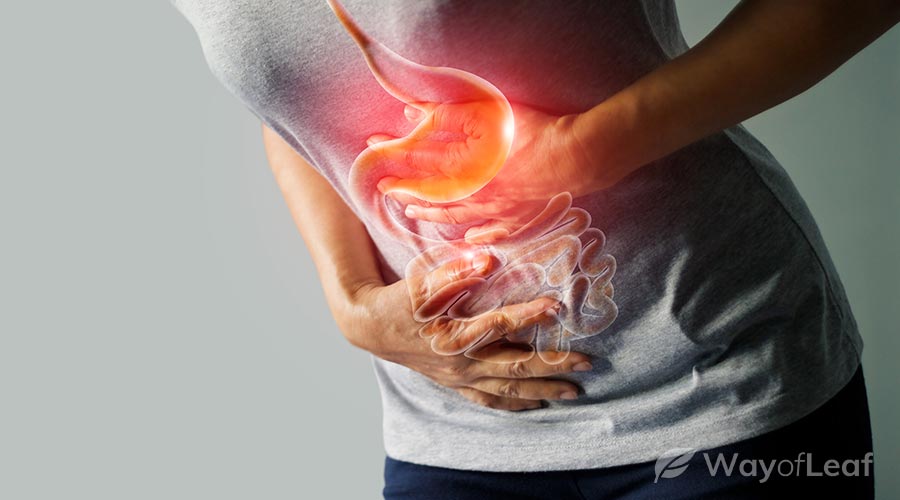 PPIs work by reducing acid production in the stomach. If someone has an H. pylori infection, they will need a course of antibiotics in addition to PPIs.

Some over-the-counter remedies like antacids may offer temporary relief from stomach ulcer symptoms. However, symptoms will keep returning until the underlying cause resolves.

In recent years, interest in medical marijuana for digestive issues has increased. Many studies suggest it could help with inflammatory bowel diseases such as ulcerative colitis and Crohn’s disease.

There is also some evidence that cannabis may help to protect the stomach from ulcers. It all surrounds something known as the endocannabinoid system (ECS). The ECS is a regulatory system present in most of the body’s tissues, including the digestive tract. It includes cell receptors, known as CB1 and CB2, and chemicals called endocannabinoids.

A 2016 review for Current Neuropharmacology explains that there are high levels of these receptors and chemicals in the digestive system. They play a role in controlling inflammation and protecting the lining of the stomach and intestines from damage.

The ECS is where the active compounds in cannabis exert their actions. For example, THC has a similar molecular shape to one of our natural endocannabinoids, anandamide. This allows it to bind with the same receptors, especially CB1.

In recent years, interest in medical marijuana for digestive issues has increased.

When it binds with CB1 receptors in the brain, THC produces the psychedelic high that has made cannabis so infamous. However, in the digestive system, it has very different effects.

It reduces gastric acid production and slows the rate at which the stomach empties. Because of this decrease in gastric acid, cannabis, in theory, may help offer a sort of protection if an ulcer has formed.

The authors of the 2016 review concluded: “the ECS can be a potential target to reduce the gastrointestinal mucosal lesions, hemorrhage, and inflammation.”

Further research from the Journal of Clinical and Translational Science in 2019 supports these conclusions. It looked at a large number of clinical records from cannabis users and non-users. The study’s results suggested that cannabis users had a lower incidence of H. pylori, peptic ulcer disease, and related complications.

In addition to potentially protecting the stomach lining from damage, cannabis could help with some specific stomach ulcer symptoms.

Many patients use medical cannabis as a pain reliever. Humans have used the plant for this reason for millennia. Although the research into marijuana for pain provides somewhat mixed results, there is plenty of anecdotal evidence that it helps.

As well as helping digestive pain, cannabis could provide a safer alternative to NSAIDs for people suffering from conditions like arthritis.

Nausea is another common stomach ulcer symptom that cannabis may help. Research into cannabis and nausea suggests that both THC and CBD may have some benefits thanks to the way they interact with the ECS.

Cannabis is well-known for producing a side effect known as ‘the munchies.’ Research indicates that this is due to the way that the ECS interacts with hunger hormones. Therefore, cannabis can both promote appetite and increase food intake for patients with stomach ulcers.

Although many states now have medical marijuana programs, the herb is not legal everywhere. An alternative that is far more widely available is CBD oil from industrial hemp. CBD is non-psychoactive, and experts consider it relatively safe and well-tolerated.

While CBD does not interact directly with CB1 and CB2 receptors like THC does, it may still have some benefits for digestive health. It can increase the levels of our natural endocannabinoids by inhibiting the enzymes that break them down.

There is currently no research specifically into CBD oil for stomach ulcers or CBD oil for ulcer pain. However, there is plenty of evidence to support its anti-inflammatory properties, and many people use it for everyday pain relief.

How to Use Cannabis and CBD Oil for Stomach Ulcers

The most typical way to use cannabis is by smoking it. However, smoking is one factor that may potentially aggravate stomach ulcers. Therefore, it may be better to choose an alternative consumption method.

We were unable to find any evidence that one way of using cannabis for stomach ulcers is better than another. However, we can hypothesize that marijuana or CBD edibles may be particularly useful. They must pass through the digestive system once they are eaten, meaning that their cannabinoids reach the target area directly.

Smoking may aggravate stomach ulcers. Therefore, it may be better to choose an alternative consumption method.

If a person lives in a state where cannabis is legal, it is highly recommended that they purchased products from licensed dispensaries. By doing this, they reduce the risk of purchasing products that may have contaminants from illegitimate sources.

Likewise, if a person opts for CBD products, they should be sure to buy from a reputable and trustworthy brand. There are a lot of companies selling low-quality products that contain little in the way of active cannabinoids. We recommend buying CBD online from a company that publishes third-party lab reports on its website. These reports ensure consumers are getting a product that is both effective and safe.

You can read about some of our favorite tried and trusted brands here. Ultimately, it is important for every individual to conduct their own due diligence when researching these various products.

There is some evidence that cannabis could help stomach ulcers, although it may be more useful for prevention than cure. It appears to protect the digestive system through its influence on the body’s endocannabinoid system.

It may also help with specific symptoms, including nausea, appetite, and pain. Thanks to their anti-inflammatory effects, cannabis and CBD could also help to reduce NSAID use for people concerned about ulcers.

However, it is essential to exercise some caution and only buy cannabis or CBD products from reputable sources. Finally, if a person intends to use either cannabis or CBD oil for stomach ulcers, they should always consult a knowledgeable clinician first to ensure that it is safe and suitable to do so.

10
8 min read
Join The Discussion
TOC
Premium
Your subscription has ended
If you love cannabis and want to support our site, join WayofLeaf Premium today and unlock
Best of all, part of your membership fee will go towards supporting the fight to legalize cannabis.
Sign Up for WoL Premium
Not now
I already have an account
×
Log in to Your Premium Account