On the face of it, asking a friend to purchase cannabis for you ‘should’ be okay. That is, as long as you are aged 21+ and live in a state where recreational cannabis is legal. After all, there is no issue requesting that someone purchase alcohol on your behalf in a liquor store.

However, the crucial difference is that alcohol is federally legal; marijuana is not. Therefore, you rely on the 11 states’ laws, plus Washington, D.C., where adult-use cannabis is permitted.

In MMJ states, patients are allowed to specify a caregiver who can buy marijuana on their behalf. Recreational cannabis laws are far less clear. In most adult-use states, the practice of ‘gifting’ small amounts of weed to other adults is allowed. It is a different story when payment is involved.

Let’s delve deeper into this issue in this article.

Here are a few things you can’t do, no matter how liberal your state is towards adult-use cannabis. 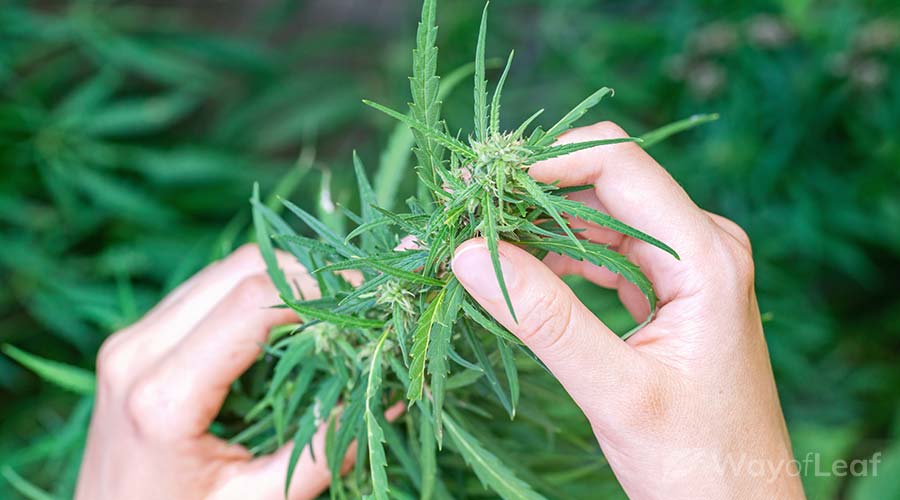 In states where recreational marijuana is legal, the age limit is 21. Therefore, you can’t legally buy, sell, possess, or use weed unless you are that age. If you buy on behalf of someone underage, you could face severe penalties, including jail time.

Selling Marijuana Without a License

It remains against the law to sell cannabis without specific authorization. As dispensary owners are finding out, that is an expensive process. Technically speaking, if you purchase cannabis for a friend and receive money in return, you are selling it.

Possession of Large Amounts of Cannabis

If your friend wants more than an ounce in most states, you are breaking the law by carrying it. It is possible to buy an ounce from one dispensary and walk down the street for more. However, if caught in possession, you will face a fine at least.

In most adult-use states, one ounce is the maximum possession limit. Maine and Michigan are exceptions, with the limit set at 2.5 ounces. Washington, D.C. is another with a higher limit.

If you are visiting a friend in a different state, leave the marijuana at home. It doesn’t matter if the drug is legal in your state and theirs. Cannabis is federally illegal. Therefore, bringing it across state lines is against the law.

Is Picking up Weed Legal? A State-by-State Guide

There are 11 states that permit recreational cannabis, and Washington, D.C. Let’s check out the laws surrounding buying cannabis for someone else.

Unfortunately, it is difficult to find information on whether picking up cannabis for a friend is legal in Alaska. We can tell you that gifting or sharing cannabis is legal. The maximum amount is one ounce or six plants. Both you and your friend must be at least 21+ years of age. Also, you are not allowed to accept any cash in return.

There is no outright state law that forbids the practice. What we do know is that the Golden State already has its hands full with other issues. These include trying to close down a host of unlicensed businesses.

The process of purchasing marijuana in California is regarded as mundane. Unless you draw attention to yourself, it seems unlikely that law enforcement will follow you to your friend’s house! As long as you keep the amount small, and you and your friend are of legal age, then it ‘should’ be fine.

The Marijuana Enforcement Division no longer oversees marijuana once it leaves a dispensary. Therefore, it is unlikely that you will get into legal trouble for picking up weed on a one-off basis. If you get into trouble, it is probably due to local police rather than becoming a state issue. Each county and municipality have their own set of rules. Therefore, one area may allow the practice, while its neighbor does not.

However, be warned that continually picking up cannabis for others could get you into trouble. Your actions could become the subject of an investigation. It might appear as if you are operating a delivery service.

Also, you can legally ‘gift’ up to an ounce to an adult friend. This means you don’t receive any reimbursement whatsoever.

The sale of recreational marijuana in Illinois only began this past year. The bill is around 600 pages long. However, it doesn’t seem to include concrete information on buying weed for a friend.

You are permitted to give up to an ounce of cannabis to an adult aged 21+ as a gift. Once again, this means you receive no remuneration.

Maine – Illegal but Could Change

Residents of Maine voted for legal recreational cannabis in 2016. However, it remained illegal to buy or sell up until recently. While you could possess up to 2.5 ounces, you couldn’t buy it from a dispensary without an MMJ card. As a result, people grew plants and gave cannabis as a gift.

Now, it is legal to sell and purchase adult-use marijuana. As a result, the laws on buying for friends might change. However, you shouldn’t try to do so until the state says it is legal.

At present, you can pick up weed for a friend in Massachusetts without looking over your shoulder. State law allows you to buy a ‘permissible amount’ of cannabis for a friend aged 21+. This act is legal as long as you don’t receive more from your friend than what you paid for the product.

Please note that the one-ounce possession limit still applies. You can’t purchase an ounce for yourself and one for your friend.

Adults were finally able to purchase recreational cannabis in Michigan in December 2019. Only four businesses began selling adult-use weed at that time. Over 1,400 municipalities in the state opted out. As a result, it remains illegal to buy or use cannabis recreationally in these locations.

Adults aged 21+ are permitted to buy and possess up to 2.5 ounces of cannabis. However, it isn’t even clear whether gifting weed is allowed, let alone buying it for a friend.

Adults aged 21+ can gift up to an ounce of cannabis to a fellow adult. However, there are no clear rules on buying it for someone and getting the money back.

State law is similar to that of Massachusetts. You can buy cannabis for a friend but not charge them more than the purchase price. If you overcharge for the weed, you technically become a seller.

However, the issue isn’t directly outlined in Oregon state laws. Therefore, there is a slight risk of law enforcement intervention. It seems extremely unlikely, however. Remain within state laws regarding age and possession limits, and you are probably going to be okay.

Although Vermont legalized recreational cannabis, it will take years for sales to begin. Indeed, state regulators have until October 2022 to issue licenses. Therefore, you can’t even buy recreational weed for yourself at present.

While recreational cannabis is legal in D.C., selling it is illegal! Some dispensaries try to get around the law by including marijuana as a ‘gift’ when selling another item. They overcharge for the item, and you get the weed ‘free.’ However, the government is trying to crack down on the practice.

In any case, it remains legal to gift up to an ounce of cannabis. However, you can’t receive any money for it.

According to state law, you are permitted to get cannabis for a friend. But according to RCW.69.50.401 of the legislature, such an act is illegal. This section of the law prohibits the delivery of controlled substances. Remember, marijuana is a controlled substance federally. Once again, it is unlikely that the rule will get enforced. However, you are technically breaking the law and could theoretically get into legal difficulties.

Incidentally, it is illegal for dispensaries to deliver cannabis to customers in Washington state.

Final Thoughts on Buying Weed for a Friend

Please note that we are not legal experts. The above is based on the information we have available. It is up to readers to delve deeper into the minutiae of state legislation if they wish. Also, we take no responsibility for those who buy cannabis for a friend and end up in legal difficulties.

Finally, it is illegal to purchase cannabis for anyone under the age of 21 regardless of the jurisdiction. It is also against the law to profit from the transaction or possess more cannabis than state limits allow.

As you can see, the laws on picking up cannabis for a friend are unclear in most places. It is only really ‘legal’ in Massachusetts. In places like California and Colorado, the law is unclear. In the likes of Vermont and D.C, it is unquestionably against the law.

8
7 min read
Join The Discussion
TOC
Premium
Your subscription has ended
If you love cannabis and want to support our site, join WayofLeaf Premium today and unlock
Best of all, part of your membership fee will go towards supporting the fight to legalize cannabis.
Sign Up for WoL Premium
Not now
I already have an account
×
Log in to Your Premium Account