With marijuana legalization on the rise, more and more studies are exploring the drug’s potential benefits, as well as harm. Some studies suggest that tobacco and alcohol may be more detrimental to your health than marijuana. So the question on everybody’s mind is, which is worse for you? Marijuana, tobacco, or alcohol?

Keep in mind that various factors come into play when comparing the health effects of marijuana, tobacco, and alcohol. These include how the substance affects your brain, heart, and behavior, and how likely it is that you will get hooked.

Time is also an essential factor. While some effects are noticeable immediately, others may only start to arise after a few months or years of use. In this article, we will take a closer look at the health comparisons between marijuana, tobacco, and alcohol.

Scientists haven’t studied marijuana for as long as tobacco. However, they have found it to have similar cell-damaging compounds to tobacco, like tar and carbon monoxide. Weed joints contain three to four times the tar that tobacco cigarettes do, and users typically inhale more deeply, using a greater lung volume, which means the tar covers more of the lung.

However, marijuana users usually only consume one or two joints a day, compared to the typical 10-40 cigarettes. This means that marijuana users absorb less tar overall in comparison to tobacco smokers.

Experts have long linked tobacco to emphysema, lung cancer (and other cancers), as well as chronic obstructive pulmonary disease. The nicotine in tobacco also contributes to its carcinogenicity – marijuana contains no nicotine.

Most studies have reported that, while tobacco smoke reduces air volume in the lungs, marijuana appears to increase it. One particular study found that cannabis is associated with average or higher lung capacity, and isn’t linked to lung disease or emphysema.

Experts estimate that it’s virtually impossible to ingest the amount of THC that would result in a lethal dose. This is likely why no fatalities have been recorded due to humans consuming weed by smoking, edibles, or any other type of consumption.

A study comparing the health effects of marijuana and alcohol on the brain reported that while marijuana might have some adverse effects, it is certainly nowhere near the risks of consuming alcohol.

There’s not much research available on the long-term risks of using marijuana. However, a link has been made between heavy marijuana use and a predisposition to psychosis in some people. But, more studies are needed to fully explore the effects of chronic marijuana use.

Is Marijuana Less Harmful than Tobacco and Alcohol?

According to a 2015 report published in Scientific Reports, the dangers of marijuana may have been overestimated in the past, while the harm of alcohol use has been commonly underestimated.

The study compared the risk of death from typical, recreational use of ten drugs: Heroin, cocaine, ecstasy, amphetamine, diazepam, methamphetamine, methadone, marijuana, alcohol, and tobacco. The study’s authors determined that weed was by far the safest substance, even when compared to cigarettes and alcohol.

The Drug Enforcement Administration (DEA) in the United States ranks controlled substances according to five schedules. Drugs like heroin and LSD, as well as marijuana, are listed as schedule one, which means that they are considered to have a high risk for abuse and are thought to be the “most dangerous.”

Since tobacco and alcohol are both legal, they aren’t controlled substances and, therefore, aren’t subjected to DEA scheduling. For years, marijuana legalization advocates have been explaining that marijuana is far safer than alcohol.

Experts consider tobacco use to be the leading preventable cause of death in the United States, while they have linked chronic alcohol use to everything from cancer to heart disease. Ultimately, yes, most experts believe that marijuana is less harmful than both alcohol and tobacco.

We often view the hazard of drug use in its capacity for addiction. Researchers have explored several drugs to determine the percentage of users who have become dependent on them within ten years of first use. Evidence suggests that marijuana is less addictive than both tobacco and alcohol. 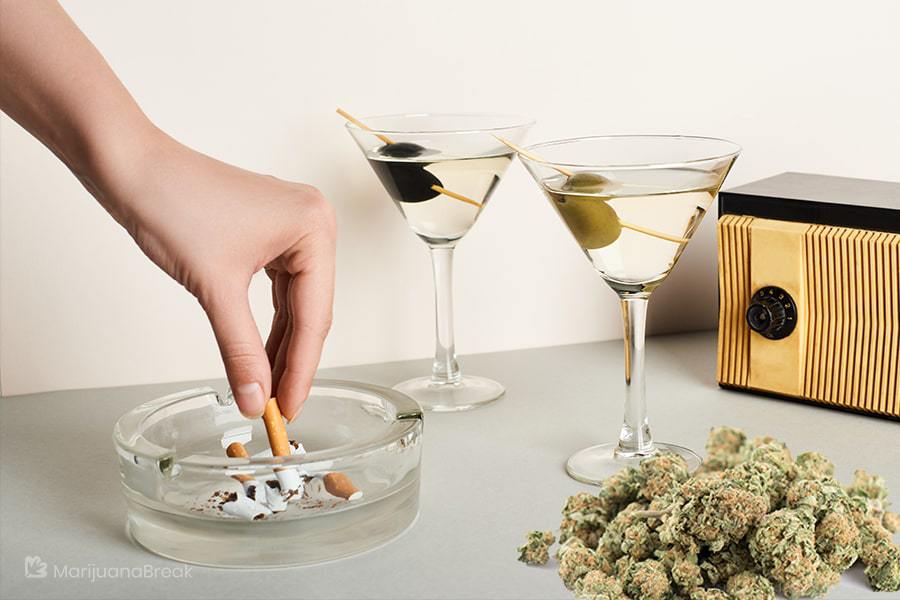 While all of these substances are linked to potential health risks, some studies also document their health benefits.

Tobacco that isn’t smoked may have some mild health benefits, primarily linked to countering the carcinogenic effects of estrogen – especially in endometrial cancer. It may also have some neuroprotective effects in Parkinson’s disease. However, more studies are needed in this area to confirm this.

Research shows that there are some possible cardiovascular beneficial effects for moderate drinkers. However, there is a dramatic increase in the risk of several cancers.

Unlike tobacco and alcohol, the compounds found in marijuana have been linked to various medical therapies. This has lead to the legalization of medical marijuana in 33 states and Washington, D.C.

Medical uses range from an appetite stimulant for cancer, chemotherapy, and other treatments to mitigating effects on glaucoma, multiple sclerosis, and Crohn’s disease, and counteracting epileptic seizures.

While alcohol and tobacco have very few, if any, redeeming health values, marijuana seems to have a number of therapeutic benefits and patients currently use it for a wide range of pathologies. Cannabis also appears to be far less harmful and has not been directly linked to any fatalities.

It’s important to understand that marijuana studies are still minimal, especially when compared to the research that exists on the effects of tobacco and alcohol. However, thus far, marijuana certainly appears to be the better option.

Shake and Trim: What’s the Difference Between These Types of Weed?