Many people smoke weed to relax and forget about their problems. But many studies claim that chronic cannabis use could impair short-term memory. Weed has long been associated with memory loss. However, until recently, this belief was mostly anecdotal. As researchers continue to expand on cannabis and its effects on human health, they are starting to better understand the impact it has on the human brain. This includes whether pot does impair memory.

To better understand how cannabis may affect memory, it is essential to recognize that memory is a complicated concept. It is not something that is easy to measure. This is because there are many different types of memory, each of which is tested differently.

Moreover, there are acute or short-term effects, as well as possible long-term effects. Also, dosing, frequency of use, and the type of strain will play a big part in how cannabis affects memory.

This complexity can make it even more challenging to study the effects that cannabis use has on an individual’s memory. Nevertheless, we can better understand this connection based on the research done to date.

How Cannabis Could Cause Memory Loss

Scientists are still investigating how exactly cannabis causes memory problems, but THC, the primary psychoactive compound in weed, appears to be the culprit.

Current evidence suggests that marijuana intoxication may temporarily distort or alter short-term memory processing. This seems to be caused by compounds like THC, which disrupt neural signaling when binding to the receptors responsible for memory in the brain. 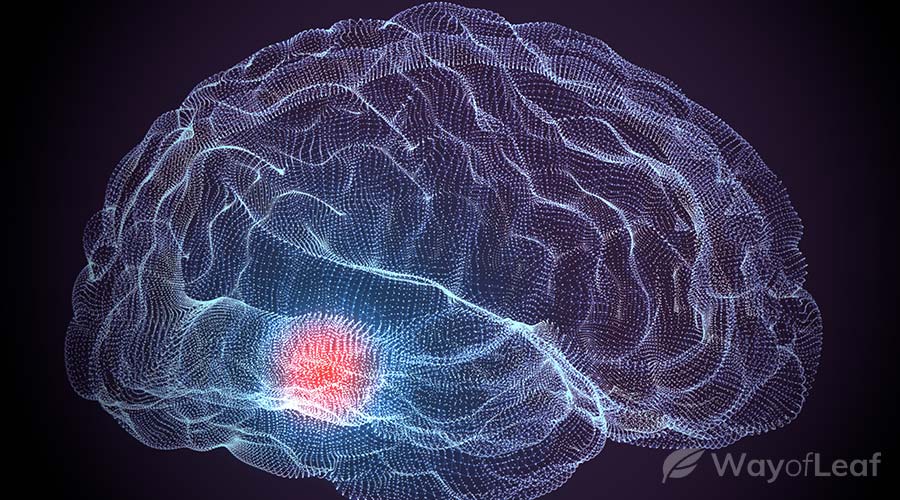 The reason cannabis may affect your memory is the same reason it’s useful as a potential medicinal treatment. It has got to do with the link between marijuana and the body’s endocannabinoid system (ECS).

Cannabis is made up of more than one hundred compounds, known as cannabinoids – these include CBD and THC. These cannabinoids are similar in structure to natural cannabinoids found in the ECS.

The body’s cannabinoids act as neurotransmitters, sending messages between nerve cells found in the body and brain cells. This allows the ECS to serve as a bridge between the body and mind. Cannabinoids affect many different regions of the brain, such as those responsible for the perception of senses, emotion, thinking, movement, and memory. THC, in particular, affects the hippocampus – the area in which new memories form.

According to a research study from the University of Lausanne, marijuana is only a danger to the brain’s memory function of those who use an exceptionally high amount. The study indicated that those who smoked weed habitually every day for five years or longer had poorer verbal memory, which is linked to short-term memory formation. Those who smoked less didn’t appear to be affected.

The study also reported that the relationship between cannabis use and memory loss is linear. Ultimately, the more weed that is smoked, the worse a person’s memory is.

Can You Blackout from Cannabis?

Typically, cannabis doesn’t cause the same kind of memory loss as binge drinking. When people drink copious amounts of alcohol in a short space of time, they may experience blackouts – episodes of amnesia.

The memory loss associated with cannabis is a lot more subtle. An individual who is stoned may forget where they left things or have trouble remembering things they learned in school. They might feel fuzzy-headed and be unable to concentrate.

These common effects of cannabis use have contributed to the stereotype of the hazy, forgetful, and unfocused stoner.

It’s important to note that memory loss may be more severe if you drink alcohol while smoking weed. Mixing the two substances is sometimes known as getting crossfaded. Those who binge drink while high may experience amnesia.

Short-Term Effects of Cannabis Use on Memory

As we’ve already discussed, THC appears to be the cannabinoid responsible for impairing the memory, and it does so in two ways:

Essentially, when you use cannabis, it can impair your short-term memory. You may struggle to remember certain things while high, but the good news is that for most consumers, memory impairment is temporary. Also, cannabis doesn’t seem to affect the user’s ability to recall existing memories. For instance, no matter how high you are, you’re unlikely to forget where you live, your date of birth, or what school you went to.

That said, there is some evidence to suggest that heavy marijuana users could suffer from permanent short-term memory loss. Those who smoke weed daily and have done so for a long time, may be at risk of having lower levels of verbal memory as they get older. This is when compared to those who either don’t use weed at all or do so minimally.

What Are the Long-Term Effects of Cannabis on Memory?

Higher doses of weed taken frequently could have an adverse effect on long-term memory. As we already mentioned above, those who consume a lot of weed over a long period of time could develop poorer verbal memory recall.

The question is, how much of the memory is impaired? We will be looking at the information gathered from the study done at the University of Lausanne (referenced above) to address this question.

Although the difference of half a word doesn’t appear to be much, the study suggests that the longer users consumed weed chronically, the worse their memory could get. Only 8% of those who participated in the survey considered themselves to be frequent users.

Final Thoughts on Cannabis and Memory

We’re only just beginning to understand how cannabis affects the brain and memory. However, based on the studies that have been done, the adverse effects seem to be slightly exaggerated.

While further research on cannabis and memory impairment is necessary, there is some evidence to suggest that heavy, long-term use may have an impact on one’s memory. That said, most short-term effects of weed on the memory are temporary.

Ultimately, it’s essential to recognize that although there is not likely to be any significant harm to an individual’s memory if they experiment with marijuana, existing research seems to suggest that the more frequent the use, the higher the risk.