In 1966 Bob Dylan sang “everybody must get stoned” in his Rainy Day Women 12 & 35 track. The songwriter says the lyrics have nothing to do with marijuana. However, in the more than half-century since, a significant number of people have obeyed the command!

Cannabis is the most commonly used illicit drug in the world. At least 200 million people use it globally. The perception is that marijuana is a substance people use when they want to relax. It is linked with a reduction in stress and anxiety. However, there are many instances where using cannabis leads to paranoia in the user. This article investigates why it happens in some people but not others.

How Does Marijuana Cause Paranoia?

Paranoia is best described as a feeling; individuals who experience it feel that they are being threatened or in danger of harm despite a lack of evidence. Paranoid individuals often believe that other people have suspicious motives even though they can’t provide a tangible reason. Estimates vary, but it is believed that up to 50% of people have at least one paranoid thought a month.

What seems apparent is that people who use marijuana are more prone to this type of thinking. A study published in Psychological Medicine in 2011 looked at the rate of paranoia in the general population of England.

Cannabis users were three times more likely to believe that someone was deliberately trying to harm them than non-users.

According to researchers, the relationship between marijuana and our endocannabinoid system (ECS) plays a role in paranoia. Compounds such as THC bind to cannabinoid (CB) receptors in different parts of the brain, including the amygdala. This is the part of the brain that regulates our response to fear and its related emotions such as stress, anxiety, and paranoia.

If your brain receives too much THC, it could provide the amygdala with excess stimulation. The result is fear and anxiety. This explanation also helps outline why CBD doesn’t cause paranoia since it doesn’t bind directly to CB receptors.

A 2014 study published in the journal Neuron confirmed that many ECS cannabinoid receptors are located in the amygdala.

Why Do Some People Become Paranoid but Not Others?

Only a certain percentage of cannabis users report thinking paranoid thoughts after using it. Also, some users only feel paranoid on occasion. Why is this the case? There isn’t any single factor involved, but the following all have an impact.

THC, the most abundant intoxicating cannabinoid in marijuana, affects everyone differently. Some people have a significantly higher tolerance than others. This can be due to genetics or frequent use. 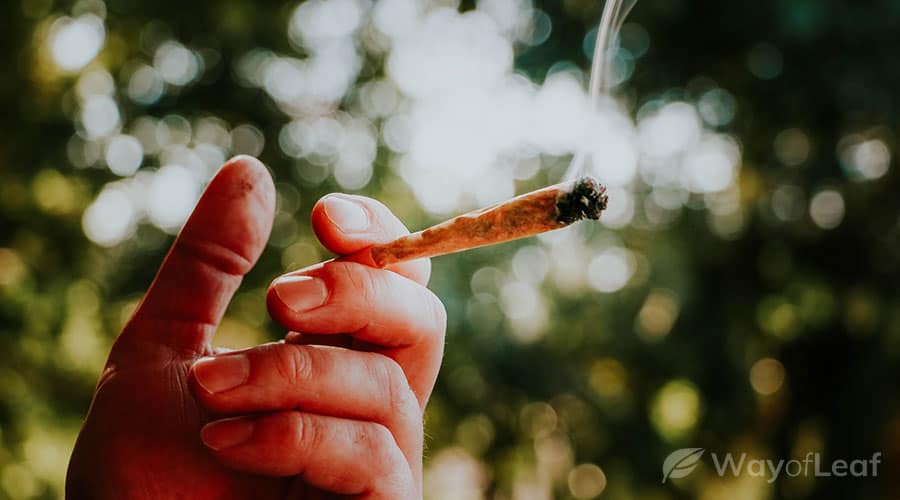 THC (and CBD) seem to offer a biphasic response. This means you will get a different reaction depending on how much you use. In THC’s case, there is evidence that small amounts of it can provide therapeutic benefits. This has given rise to the practice of microdosing. However, the more you use, the greater the risk of an adverse effect.

A 2017 study published in Drug and Alcohol Dependence outlined THC’s biphasic effect in practice. Researchers from the University of Chicago tested how THC affected 42 cannabis users under stressful conditions.

Those who consumed 7.5mg of THC reported feeling less stressed by a mock interview than volunteers who use a placebo. However, those who used 12.5mg reported a greater degree of negative emotions while performing the same task than those who used the placebo.

It is particularly important to exercise caution when using edibles. They often have relatively high amounts of THC. Also, as the high is delayed, there is a risk of a user consuming too much as they don’t wait for the effects to occur.

A study published in Nature in 2019 looked at cannabis’ impact on animals. The researchers found that the substance typically reduced anxiety and increased relaxation when it mainly stimulated the brain’s front region.  The authors of the study said this was because this part of the brain features a high number of opioid receptors.

If your brain’s back portion has a higher level of THC sensitivity than the front, there is a greater risk of a negative reaction. This can include side effects such as anxiety and paranoia.

Although this theory has less evidence, it’s interesting to review an animal study from 2014 published in Drug and Alcohol Dependency. It found that higher estrogen levels could heighten marijuana sensitivity by up to 30% while reducing THC tolerance.

It's amazing how much of a dif…

This study seems to suggest that females are more likely to have sensitivity to marijuana’s effects. It means women are possibly more prone to experiencing anxiety and paranoia than men. However, they are also more likely to benefit from positive effects such as pain relief.

Our brains and ECS change as we age. You could use cannabis without any problems at the age of 25. However, using the same amount when you’re 45 could have effects that you don’t anticipate.

Your mood and environment also have an impact. If you already feel stressed out, using too much THC is more likely to lead to paranoia and anxiety than when you feel calm. Naturally, if you’re already worried about being ‘caught’ using weed, it will play on your mind. This is also the case if you’re naturally nervous or paranoid.

It is also a fact that cannabis strains have become a lot more potent in recent times. In the ‘golden age’ of marijuana in the 1960s and 1970s, it was harder to get THC-rich cannabis. However, these days, breeders are consistently trying to produce stronger strains. While you might have got 5-7% THC a few decades ago, a THC content of over 20% is the norm these days.

How to Reduce the Risk of Paranoia When Using Cannabis

Before you even consider using cannabis, make sure you have the ideal setting. This means finding a place that is comfortable where you can use the weed in peace. Don’t choose a place where you’re constantly looking over your shoulder. Also, consider dimming the lights and putting on some soothing music.

If you are already predisposed to paranoid thoughts, staying away from THC is probably the best option.

Additionally, the sensible option is to use a strain with a low to moderate amount of THC. You can also help matters by picking marijuana with a high level of CBD. It seems as if CBD can module excess cannabinoid activity in the brain, which helps reduce the likelihood of anxiety. Look for a minimum CBD to THC ratio of 1:1.

It is also helpful to use a small amount at a time. This is especially the case with edibles, where the effects can take a while to kick in. Finally, if you are already predisposed to paranoid thoughts, staying away from THC is probably the best option.

Final Thoughts on Why Cannabis Can Cause Paranoia in Some Users

A lot depends on the amount of THC you consume in a single sitting. Using a cannabis strain with a high THC content automatically increases the risk of paranoia. Also, certain individuals are genetically more prone to paranoid thinking after using marijuana. If you fall into this category, you’ll have to give serious consideration to whether you want to continue using it.

It is also worth noting that your brain and ECS change when you get older. Therefore, the effects of cannabis may be different ten years from now. You decrease your chances of experiencing paranoia as a side effect if you use sensible amounts of marijuana. It is also useful to consider strains with enough CBD to help counteract any possible negative effects of THC.