Written by John Killerlane, B.A., HDip
6 min read
3 comments
Read Later
All information on this website is for general informational purposes only and is not intended or implied to be a substitute for professional medical advice, diagnosis or treatment.

Let’s face it; when you’re the child of a famous parent, people will compare you to them to see how you measure up. In some cases, these comparisons can be unfair. However, with GSC (formerly known as Girl Scout Cookies), we believe it has got what it takes to go head-to-head with its legendary parent.

These two strains are among the most popular in the world of weed and for good reason.

OG Kush is widely regarded as one of the all-time greatest weeds strains. GSC, a cross of OG Kush and Durban Poison, is considered a modern-day classic.

As impressive as both strains are, we can’t get enough of doing head-to-head pot comparisons. So, let’s compare OG Kush and GSC to see which strain, if any, has the overall edge.

OG Kush is a legendary hybrid with a hefty THC content of up to 27%. After consuming this strain, its consumers commonly report feeling uplifted and euphoric, but also nicely relaxed. 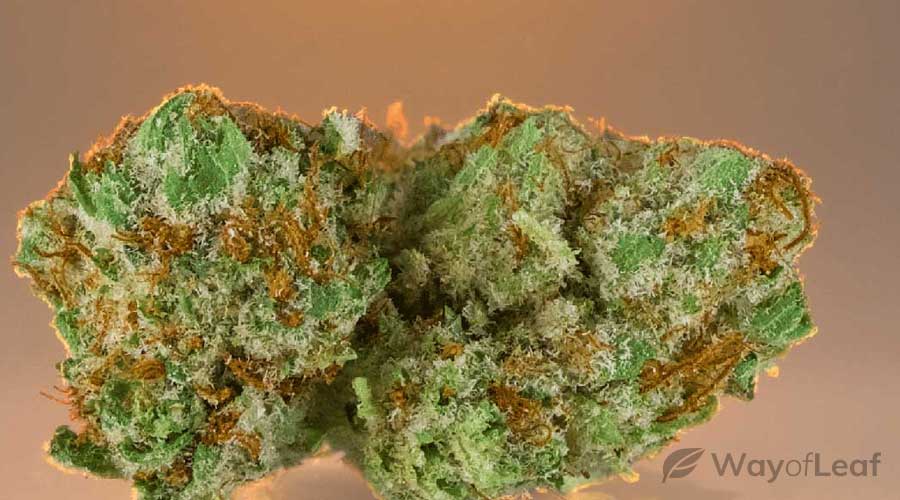 GSC is also an uplifting and relaxing strain that hits you with a full-on body high. While you may feel a little energy boost, GSC will eventually cause you to sink into your sofa. It is very much an evening-time strain with long-lasting effects.

GSC has a slightly higher THC level than OG Kush (28% compared to 27%). However, with only 1% in the difference, it is too marginal to be significant, particularly at that high a THC level. Both are extremely potent, and a tie is the fairest result.

Medicinal Benefits of Both Strains

This strain is known for its ability to help address the symptoms of several different types of conditions. Many medicinal patients primarily use OG Kush for its uplifting, mood-enhancing, and euphoric effects.

For those who suffer from mood disorders like depression and anxiety, be mindful of this strain’s high THC level. Those who have experienced heightened paranoia or anxiety after consuming high THC strains should be careful not to over-consume this strain.

However, when carefully consumed in moderation, OG Kush has a lot to offer. Many lovers of this strain laud its ability to help them de-stress and unwind after a long and busy day. Others consume OG Kush for its purported analgesic properties to temporarily relieve their particular painful condition.

Some also say that OG Kush’s relaxing latter-stage effects can help them get a better night’s sleep.

Everything we have said medicinally about OG Kush, we could arguably also say about GSC. Their purported medicinal benefits are largely similar. Some consider GSC to be a go-to strain for severe and chronic pain conditions, such as migraines.

Many also use GSC for temporary relief from the negative symptoms of mood disorders and social anxiety disorder. However, as is the case with OG Kush, users prone to adverse reactions to high THC strains should be careful not to over-consume GSC.

Lastly, some say that GSC has some antiemetic properties too, and commonly use it to alleviate feelings of nausea.

We feel a tie is a fair result here. It is almost impossible to give either strain the win here as both offer similar potential health benefits.

The most commonly reported side effects associated with OG Kush are cottonmouth and dry eyes. However, some have experienced heightened anxiety and paranoia after consuming this potent strain. Overconsuming too much OG Kush to address an anxiety disorder is a bad idea.

Others have reported feeling dizzy or have had a mild headache after consuming OG Kush. These adverse reactions are relatively uncommon and are more likely to be experienced by novice cannabis consumers or those who overindulge.

GSC’s side effects are incredibly similar to OG Kush’s. However, dizziness, heightened paranoia, and anxiety is less commonly reported by GSC than OG Kush users. However, these side effects are still possible; therefore, some users may experience these adverse reactions. One slight difference between the two strain’s side effects is that GSC doesn’t tend to give its consumers a headache.

OG Kush has a distinctive and diverse terpene profile and fragrance. OG’s aroma combines strong piney and earthy notes with hints of skunk, fuel, and spice. When cured, OG’s buds have an earthy, almost musty scent.

In terms of its flavor, OG Kush has a fresh earthy taste, which is complemented nicely by a piney flavor. Some notable sweet and fruity flavors include subtle citrusy lemon notes. When combusted, OG Kush produces thick, harsh, cough-inducing smoke that tastes of hash and spice.

Appearance-wise, an OG Kush plant has a dense coating of medium to large buds with an indica-like structure. The plant’s leaves typically have a yellowish-green color, but some phenotypes can have a purplish hue. These phenotypes have this purplish color as they contain anthocyanin pigments.

It’s important to note that there are several different GSC phenotypes, such as Thin Mint and Platinum Girl Scout Cookies. All of these phenotypes have their own unique flavor and fragrance. 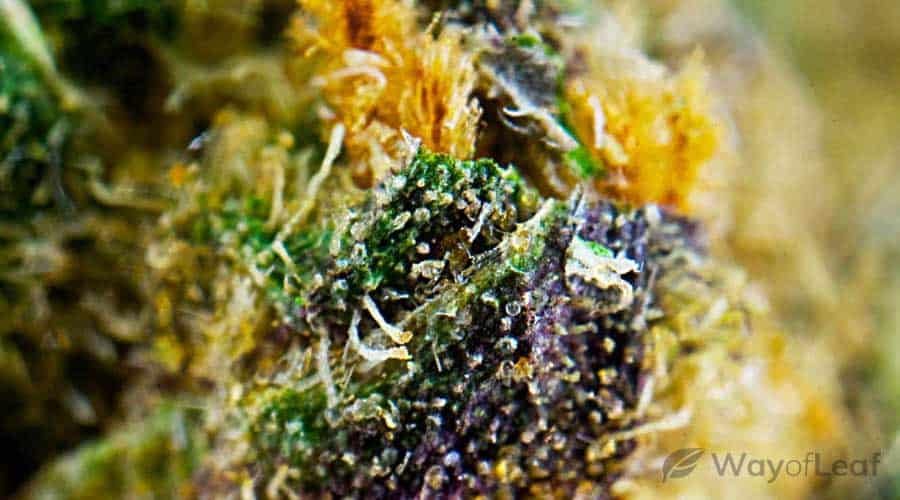 The phenotype we are focusing on in this head-to-head battle is the original GSC strain. This strain has a sweet and earthy aroma, which only intensifies as you break open the fragrant buds.

Many GSC lovers describe its flavor as very similar to OG Kush’s. Some say the main difference between the two strains is that GSC is sweeter and has a dessert-like taste.

GSC wins out in this close-fought category due to its sweeter flavor and aroma.

The cost of OG Kush has been falling in recent times. You should be able to procure a gram for around $13 and an ounce for $250. As you might expect, though, it is more expensive in certain areas. San Francisco, for example, appears to be the most costly at $318 an ounce. That’s significantly higher than Louisiana, where the average cost of an ounce of OG Kush is approximately $235.

Marijuana Rates says that the national average for a gram of GSC is $13. However, you can pay $15 per gram on average in Denver. 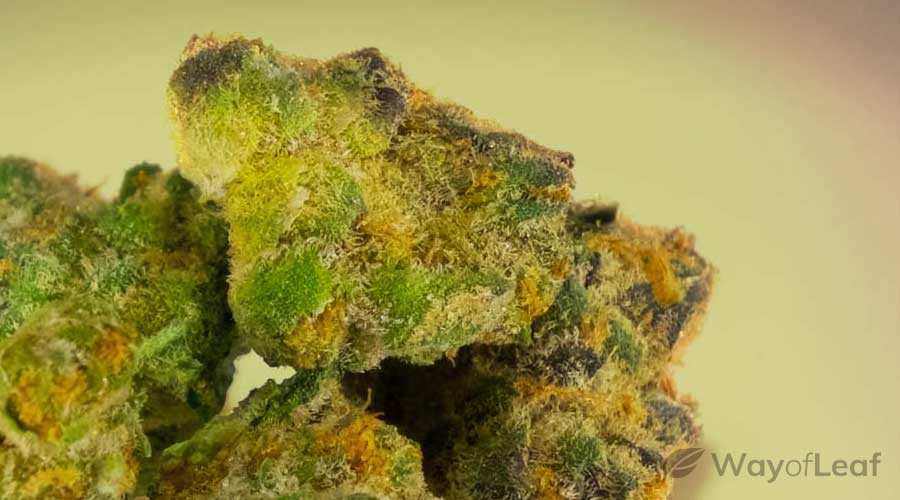 Meanwhile, Oregon residents can benefit from the low prices at the Bloom Portland dispensary. This dispensary regularly offers great deals, such as $9 a gram or $171 for an ounce of GSC.

Having said that, an ounce of GSC costs $350 in West Virginia and Texas. Residents of Massachusetts have to pay an astronomical $450 for an ounce of GSC!

OG Kush is considerably cheaper in most places. Perhaps, you won’t mind paying the few extra dollars if you love GSC.

It is a fast-selling strain, but OG Kush is not easy to grow. It requires close monitoring because it is susceptible to powdery mildew. After an 8- 9 weeks growth period, you should get up to 17 ounces per square meter indoors, or about 16 ounces outdoors.

For a more detailed OG Kush grow guide check out this article:

GSC is generally easier to grow than OG Kush. While it has a similar growth period, it is less likely to succumb to diseases and mildew. GSC has a slightly longer flowering period at 9-10 weeks and produces lower yields. Indoors, GSC growers are looking at a return of approximately 10 ounces per square meter. Outdoor GSC growers can expect an average return of around 10 ounces per plant.

Super tips to grow this awesom…

GSC may be easier to grow, but OG Kush produces a significantly higher yield.

We think you’ll agree; this truly was a clash of the titans! GSC showed that it could shine in its own right rather than being in its parent’s shadow. It secured a credible tie in this epic head-to-head battle.

We learned that GSC is slightly more potent, and is easier to grow than OG Kush. OG Kush, on the other hand, is less expensive on average, and produces a higher yield, both indoors and outdoors.

They are both world-renowned strains for a reason: Exceptional quality, high THC content, and relative ease of purchase in states where weed is legal for medicinal and recreational use.

Let us know in the comments below which one of these top-quality strains is your favorite and why.