One of the many major issues facing the cannabis industry is the unbridled negativity it is subject to. The level of research into marijuana is undoubtedly growing rapidly. However, a significant majority of it continues to focus on adverse outcomes. For example, there are numerous studies on whether smoking weed can damage the lungs.

There is also a ton of flawed research looking at the herb’s effects on IQ, cognitive function, and much more. It often seems as if positive findings related to Mary Jane are quickly brushed under the carpet by eager anti-weed advocates.

Take the issue of whether cannabis could help eyesight. Much of the focus is on how smoking weed can cause redness in the eyes. The THC in pot lowers blood pressure, which in turn dilates the blood vessels. It also increases blood flow throughout the body. As a result, blood vessels in the eyes expand and cause redness or bloodshot eyes. Exposure to smoke can also cause red eyes.

Indeed, for years, researchers were looking into the possible negative effects of cannabis on glaucoma patients. It is a disease of the optic nerve, and patients with the condition have increased eye pressure. This emphasis almost causes us to ignore the fact that weed could decrease pressure in the eyes.

As it happens, cannabis could help people with glaucoma and provide an improvement in eyesight. Let’s take a closer look at the research.

A Little About the Plant Itself

Before we proceed, let’s take a quick look at the cannabis plant. Here is an overview:

Cannabis and Eyesight – The Facts

As we mentioned above, one of the biggest obstacles to cannabis research is the inherent negative slant. This is hardly a surprise after over 80 years of prohibition. Anti-cannabis campaigners simply refuse to countenance that they are potentially wrong. Their stubbornness could prove costly to countless people with conditions that cannabis could help. 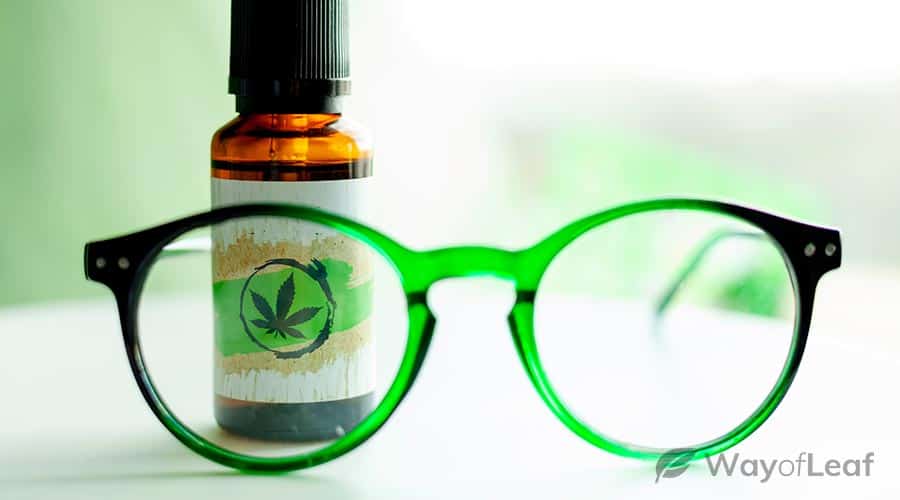 The fact these people continue to try and prevent positive research into weed speaks volumes. This blindness could prevent those with actual vision problems from finding a solution one day. Let’s look at the research into marijuana and eyesight to see what positive findings there are.

Glaucoma is an eye condition that affects approximately 2.7 million Americans over the age of 40. The disease is degenerative, meaning that over time it can lead to loss of vision, complete blindness, and cataracts.

Glaucoma explicitly affects the optic nerve, which transports visual data to the brain. Pressure build-up within the eye (known as intraocular pressure or IOP) can deteriorate this nerve and the surrounding tissue over time. This dramatically impairs sight and can even lead to blindness.

The American Glaucoma Society recognizes the potential in marijuana.

It could potentially reduce intraocular pressure, which is one of the main risk factors of the condition. However, while weed can decrease pressure in the eye, it is also just a temporary fix and lasts only 3-4 hours. Treating glaucoma requires managing eye pressure 24/7.

Therefore, it is unrealistic to expect patients to use cannabis several times a day. One can microdose, of course, but it is unknown whether such small amounts of THC could help. In any case, it becomes a problem for anyone who intends to drive or otherwise operate heavy machinery. It also means you could lose your job after inevitably failing a drug screening at work.

Can Cannabis Slow Down Blindness?

Before we continue, please don’t misconstrue any findings from the research you read online. Nowhere does it say that cannabis can cure any medical condition. For example, there is NO evidence that marijuana can cure blindness. However, there is research that suggests it can slow down the process.

A study by Lax et al., published in Experimental Eye Research in March 2014, looked at the neuroprotective effects of a synthetic form of THC on retinal degeneration. In essence, there is a chance that cannabinoids could slow down the process of blindness. The Spanish researchers conducted the study on rats with a degenerative eye disease called retinitis pigmentosa (RP).

After 90 days of treatment, the rats that consumed the THC scored higher on vision tests.  They also acquired 40% more photoreceptors than the control group. Around one in every 4,000 people have RP. It seems as if THC could protect the retina’s inner layers. In many ways, the findings were not a surprise. Cannabinoids are also linked with helping symptoms of degenerative disorders such as diabetes, Parkinson’s, and Alzheimer’s.

Although it is an exciting finding, we need to see similar results in human trials before we get too optimistic.

Can Cannabis Improve Our Vision?

We would love to say that there is firm evidence. However, much is of the anecdotal kind at present. A paper by Akano, published in Optometry and Vision Science in May 2017, looked at cannabis use and self-reported quality of eyesight.

It analyzed the National Longitudinal Survey of Youths, a nationally representative sample of over 12,000 young adults from 1979 to 2010. The survey examined 1,304 heavy cannabis users and compared them to the same number of respondents with minimal marijuana use.

The premise of the research was that the process of smoking itself was linked with eye damage, and could accelerate age-related macular degeneration. It found:

“no statistically significant difference in self-reported eyesight amongst heavy marijuana users compared with youths who never used marijuana or are light marijuana users.”

This abstract didn’t make any medical or scientific claims that outlined why heavy cannabis smoking decreases the odds of loss of vision.

A study by Chakraborty et al., published in Scientific Reports in November 2015, revealed something fascinating. Babies exposed to marijuana in the womb had better vision and were far better at tracking moving objects than the norm. Of course, there are several adverse developmental effects associated with using cannabis while pregnant. Therefore, it is incredibly unwise even to consider it.

What’s interesting about this study is the possible positive connection between visual processing the brain and the consumption of cannabis. Incidentally, in the same study, babies exposed to alcohol experienced a negative effect on their vision.

One of the stranger studies relating to cannabis and eyesight involves a group of Moroccan fishermen. They claimed that smoking kief helped them see better in the dark. It isn’t a new tale, either.

In the early 1990s, a pharmacologist, M.E. West, at the University of the West Indies in Kingston, Jamaica, noted something similar. He said that local fishermen who drank rum made with the leaves or stems of cannabis, or smoked the herb, had “an uncanny ability to see in the dark.” West was understandably skeptical; that is until he went on a boat ride with the men. Afterward, he suggested that the stoned fishermen had far better night vision than he had.

Regarding their Moroccan counterparts, a group of scientists decided to put the theory to the test. The result was a study by Ethan Russo et al., published in the Journal of Ethnopharmacology in July 2004. The team brought a machine used for measuring night vision, and a 2:1 ratio of high-quality sifted weed and a tobacco mixture. They asked the fishermen to consume the herb liberally and go to work. They were astonished to find that the volunteers showed consistent improvements in their night vision.

Sue Arnold is a British journalist who worked for The Observer and The Guardian newspapers in the UK. Sadly, she lost her sight as a result of RP. In September 1997, she made a shocking claim in The Observer. Arnold said that her eyesight was temporarily restored after smoking some potent cannabis. Her chief complaint was that she couldn’t stand up afterward!

Final Thoughts on Marijuana and Eyesight

So, can cannabis improve our eyesight? Results from research to date are promising in one sense, but there isn’t nearly enough evidence to make any strong claims. It does seem as if the number of positive studies on the topic is making inroads compared to their negative counterparts. Indeed, some studies which claim that weed has adverse effects on eyesight also have minimal evidence.

A study by Schwitzer et al., published in JAMA Ophthalmology in January 2017, looked at the association between regular marijuana use and ganglion cell dysfunction. It said that cannabis could result in retinal cell dysfunction based on “a large delay in retinal information processing.”

Yet even one of the study’s authors, Dr. Vincent Laprevote, admitted that the impacts are incredibly minimal. He said, “such an anomaly could be imperceptible for cannabis users.” However, he did go on to claim that it could reflect changes in neural cell communication implied by regular cannabis use.

The truth is, marijuana is unlikely to prove useful as a treatment for glaucoma. However, the fact that it could improve night vision is remarkable. Of course, we need a lot more evidence before suggesting that we should get high at night to see better!

In reality, it seems likely that there are a lot of things that cause more significant damage to the eyes than cannabis. For example, aging and deficiencies in vitamins A and E are possibly higher risk factors for issues with the retina. In summation, we need far more studies than are currently available to determine conclusively whether cannabis improves our sight, or makes it worse.