A 2020 review suggests that there are over 1000 chemical compounds in cannabis, 177 of which are cannabinoids. This figure is impressive enough before even considering the endocannabinoids that occur naturally in the body and synthetic cannabinoids manufactured in labs.

As there are so many cannabinoids, it would be impossible for us to discuss them all in just one article. Below, we explore the most common examples and their uses, but first, let’s look at what cannabinoids are and how they affect us.

What Is a Cannabinoid?

People generally use the term “cannabinoid” to refer to chemicals produced by cannabis plants. However, it is more accurate to call these chemicals “phytocannabinoids,” with phyto- meaning “plant.”

There are also endocannabinoids that the body synthesizes and uses as signaling molecules to control various physiological functions. And in the past few decades, scientists have begun manufacturing numerous synthetic cannabinoids for medicinal and recreational use. 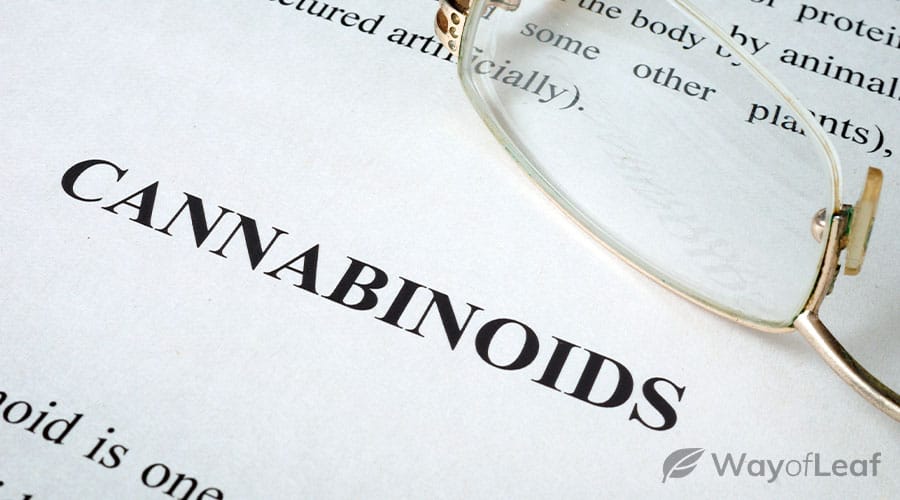 These compounds all have in common that they interact with a biological system known as the endocannabinoid system (ECS). It regulates many vital functions, such as mood, hunger, hormonal balance, immunity, and more.

The ECS comprises cannabinoid receptors known as CB1 and CB2, with CB1 being most concentrated in the central nervous system and CB2 being widespread elsewhere. Endocannabinoids fit into these receptors like a key into a lock, activating them to trigger a specific response.

Phytocannabinoids and synthetic cannabinoids possess a similar molecular shape to our endocannabinoids. Therefore, they fit into the same receptors to produce comparable physical and psychological effects.

The Most Common Cannabinoids Explained

As we mentioned, cannabis plants produce well over 100 different cannabinoids. The best known are tetrahydrocannabinol (THC) and cannabidiol (CBD), although there are many more. 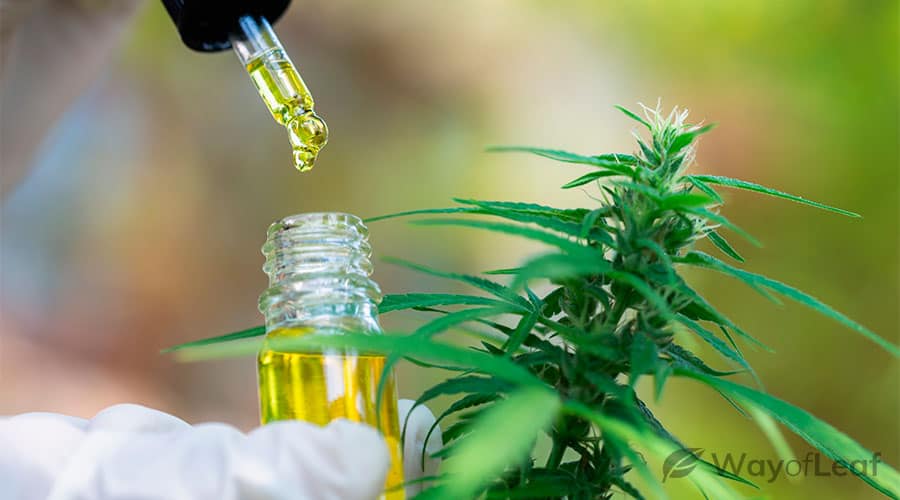 Below is a summary of the most common cannabinoids.

THC is probably the best-known and most thoroughly researched compound in cannabis. It is sometimes referred to as delta-9-THC, with delta-9 indicating the position of a double bond on the molecule’s carbon chain.

It has a similar chemical structure to an endocannabinoid known as anandamide and acts on CB1 receptors within the ECS. Therefore, it has a powerful impact on the central nervous system, including intoxication, painkilling, anti-nausea, and hunger-inducing effects.

Recently, other forms of THC have become available, including delta-8 and delta-10 THC. These chemicals are very similar to delta-9 but differ in the placement of their double bonds. They bind less readily with CB1 receptors to provide milder psychoactive effects.

Delta-8 and delta-10 THC exist in tiny quantities in the cannabis plant, but manufacturers can synthesize them using hemp-derived CBD. They are not explicitly prohibited under the Controlled Substances Act and are available for sale in many states. However, some have moved to ban the cannabinoids due to a lack of research and concerns over their safety.

Learn more about these new cannabinoids by checking out the Delta-8 Homepage here at WayofLeaf.

THCP is another mind-altering cannabinoid that exists in small amounts in cannabis but can be synthesized from CBD. Its full name is delta-9-cannabiphorol, and it differs from THC in the length of its carbon side chain.

While THC has five carbon atoms in its side chain, THCP has seven. This allows it to bind with CB1 receptors more effectively than THC to produce even stronger effects.

Like delta-8 and delta-10 THC, many companies are now selling THCP converted from hemp-derived CBD. At the time of writing, it is legal in a number of states. However, due to its extreme potency, even experienced cannabis users should approach THCP cautiously and start with the minimum dose.

CBD is a cannabinoid that has become famous in recent years. It is a non-intoxicating compound that exists in significant quantities in certain marijuana strains and industrial hemp.

It does not bind strongly with cannabinoid receptors but affects how they interact with other molecules such as THC. It also influences other receptor types throughout the body and appears to slow the breakdown of endocannabinoids like anandamide.

These activities mean that CBD has a range of potential health benefits. People commonly use it to relieve inflammation, pain, and anxiety, improve sleep, and boost general wellness. The FDA has approved a form of CBD for the treatment of certain seizure disorders, sold under the trade name Epidiolex.

Cannabigerol (CBG) is less abundant than THC or CBD in cannabis plants, and less is known about its physiological effects. However, research suggests it has some benefits, and a growing number of brands are offering CBG products as part of their range.

CBG primarily binds with CB2 receptors and has potential anti-inflammatory, antioxidant, and antimicrobial effects. It is not intoxicating like THC, but anecdotal reports suggest that users of CBG may experience an increased sense of calm.

Cannabinol (CBN) was the first cannabinoid isolated from the cannabis plant. It was initially thought to be the chemical responsible for the plant’s psychoactive effects, although we now know this is not the case.

However, the scientists that made this assumption were not too far from the truth. We now understand that THC is responsible for cannabis’ intoxicating effects, and CBN forms due to the breakdown of THC. Therefore, it tends to be more abundant in cannabis that has been stored for long periods.

Many people use CBN to increase relaxation and aid sleep. However, there is limited evidence regarding the cannabinoid’s sedative effects, and this use is mainly based on anecdotal reports.

Those who are unfamiliar with cannabis may not realize that the raw plant actually contains minimal THC or CBD. Instead, these cannabinoids exist in their acidic forms, THCA and CBDA. These originate from another compound known as CBGA, which is sometimes known as “the mother cannabinoid.”

CBGA converts into THCA and CBDA via a complex enzymatic reaction. Then, when plant material is exposed to heat and light, these chemicals convert into CBG, THC, and CBD, respectively. This process is known as decarboxylation. It involves replacing a carboxyl group comprising one carbon, one hydrogen, and two oxygen atoms with a single hydrogen atom.

The above phenomenon explains why eating raw cannabis will not cause intoxication, and decarboxylation is essential when making edibles. However, cannabinoid acids have various potential benefits of their own. They include anti-inflammatory and painkilling properties.

Another important group of cannabinoids is the varinoids, including tetrahydrocannabivarin (THCV) and cannabidivarin (CBDV). These compounds were discovered in the 1970s, but their potential benefits have only recently come to light.

THCV is a non-intoxicating analog of THC. It acts upon CB1 receptors but does not affect the central nervous system like its psychoactive counterpart. In fact, some experts believe that THCV decreases the potency of THC.

Additionally, THCV has been researched for its effects on food intake, body weight, and blood sugar control. The cannabinoid could reduce appetite, mitigate weight gain, and reduce glucose levels. It may also have anti-nausea effects.

CBDV appears to have anti-inflammatory, antiseizure, and anti-nausea effects. Early research suggests it may also influence the neurotransmitter glutamate to induce behavioral and cognitive alterations. However, there is insufficient evidence to explain how it works and its precise effects.

Synthetic cannabinoids often get a bad rap due to the dangerous effects of products like Spice and K2. These infamous street drugs affect the body even more strongly than natural THC and can cause severe side effects. 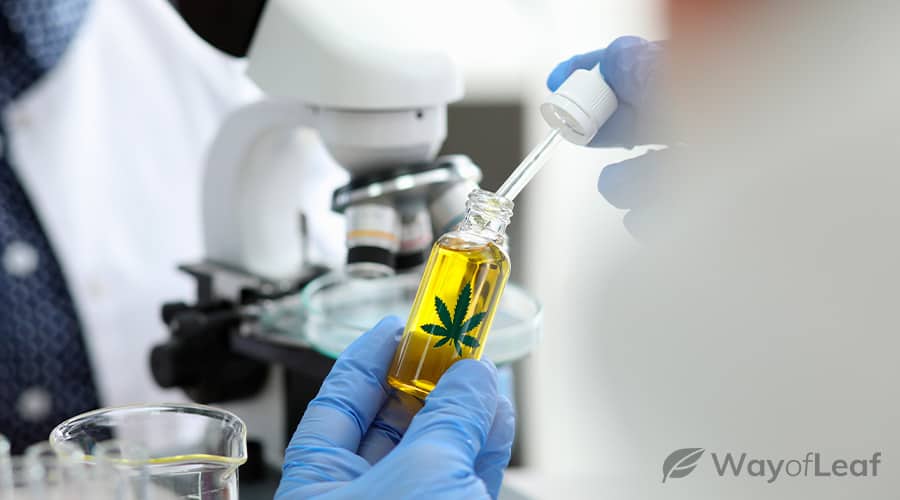 However, there are a couple of FDA-approved synthetic cannabinoids that have therapeutic properties. As they are manufactured in a lab, they are easier to standardize and dose than whole-plant cannabis.

Numerous companies are also now producing synthetic cannabinoids by manipulating the structure of hemp-derived CBD. These products exist in a legal gray area, meaning manufacturers can sell them in states where cannabis itself is prohibited.

Dronabinol is a synthetic cannabinoid sold under the trade names Marinol and Syndros. It is a form of THC and has been approved as a treatment for people undergoing chemotherapy or living with AIDS. It is associated with reduced nausea, increased appetite, weight gain, and improved mood in these patient groups.

Nabilone is another synthetic cannabinoid approved for the treatment of chemotherapy-associated nausea. It is sold under the trade name Cesamet. The drug may also help to reduce spasticity in conditions such as motor neuron disease.

Ajulemic acid is a synthetic cannabinoid acid. Its effects are similar to other cannabinoid acids, including anti-inflammatory and painkilling effects. It also has antifibrotic activity and may help treat conditions like skin and lung fibrosis.

THC-O acetate, often simply known as THC-O, is a synthetic version of THC with an additional acetate group. The acetate group means that THC-O binds with cannabinoid receptors more readily than natural THC and is an estimated three times stronger.

Many companies are now manufacturing THC-O from industrial hemp, meaning it is technically not illegal. It is available in most states where recreational cannabis is permitted, although it is banned throughout much of Europe.

There is a lack of research into THC-O’s safety and whether it has any benefits. Moreover, it should be used with care due to its extreme potency.

Hexahydrocannabinol, or HHC, is another synthetic compound with a similar structure to THC. However, whereas THC has a double bond on its ninth carbon atom, HHC has two additional hydrogen atoms instead. This feature is thought to make the compound more stable and increase its shelf life significantly.

It can be manufactured from industrial hemp and is not federally illegal. However, several states prohibit its sale and use.

How Many Cannabinoids Are There in Total? Final Thoughts

There are so many cannabinoids it is impossible to list them all in just one article. In addition to those naturally produced by our bodies and cannabis plants, scientists are constantly creating new and exciting cannabinoids. Some of these chemicals are approved medical treatments, while others have more recreational appeal.

A number of novel cannabinoids have appeared on the market in recent years. They are sold as legal alternatives to whole-plant cannabis in places where it is not yet available. However, a lack of research and regulation means consumers should approach these cannabinoids cautiously and only purchase from reputable brands. 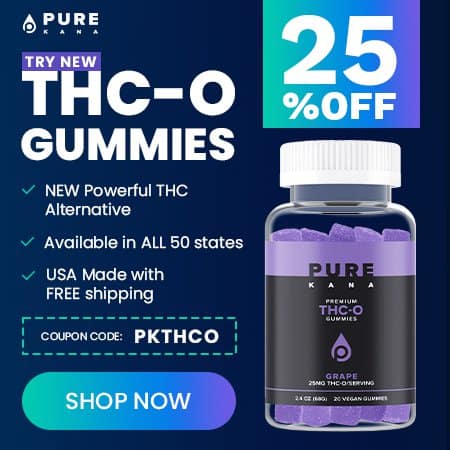 21
7 min read
Join the discussion
TOC
Premium
Your subscription has ended
If you love cannabis and want to support our site, join WayofLeaf Premium today and unlock
Best of all, part of your membership fee will go towards supporting the fight to legalize cannabis.
Sign Up for WoL Premium
Not now
I already have an account
×
Log in to Your Premium Account