Most people associate nausea with pregnancy, but in reality, nausea can appear in all shapes and sizes. Common causes of nausea include stomach flu, motion sickness or seasickness, and food poisoning. Even a dull, unpleasant sensation of discomfort or unease in the stomach can set it off. Chemotherapy is also known to cause nausea and vomiting, occurring in up to 80% of patients.

Nausea can occur in so many different situations that it is often hard to pinpoint the exact cause. The timing of the nausea can often indicate the cause. For example, if nausea appears after a meal, it could indicate food poisoning, an ulcer, or gastritis.

According to WebMD, nausea and vomiting are not classed as diseases but instead refers to them as symptoms of conditions such as;

Cancer patients often experience nausea during chemotherapy treatments. The level of nausea depends on the type of chemotherapy drugs they receive. It also depends on whether they’ve experienced nausea or vomiting in the past.

How Does Nausea Affect Your Health?

While nausea and vomiting are two of the most dreaded, unpleasant sensations to have, they only rarely become life-threatening. Nausea and vomiting can prevent your body from receiving the nutrition it needs, and ongoing vomiting can lead to dehydration. Extensive vomiting can also cause electrolyte disturbances and affect the body’s acidity level since the body loses hydrochloric acid while vomiting. This can be very dangerous if vomiting continues, and it is not dealt with effectively. 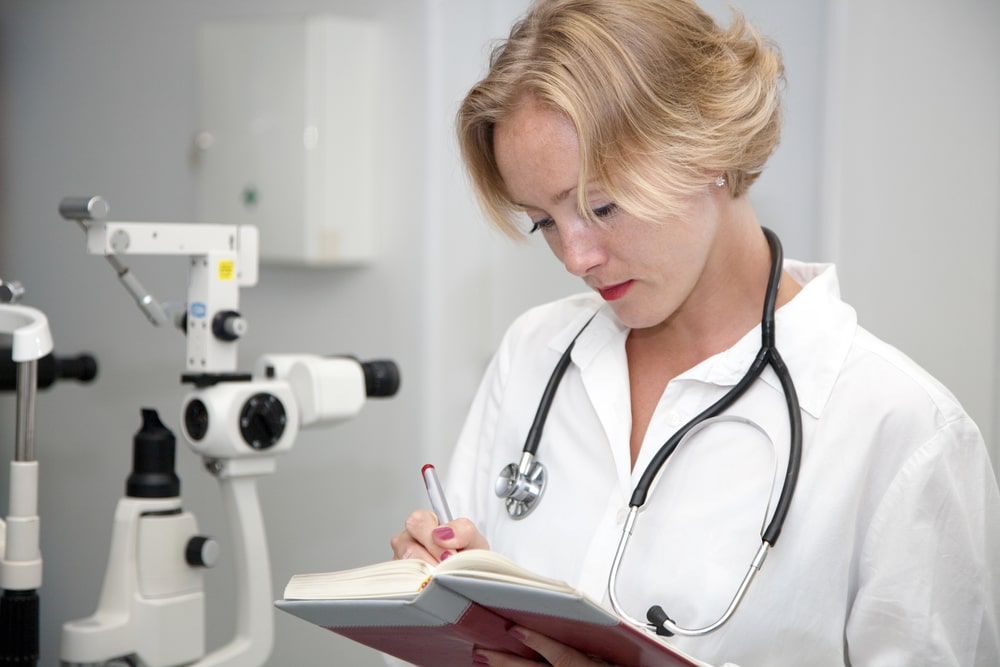 Treating nausea or vomiting should be done on a case by case scenario. It is always best to visit your primary care doctor to understand what is causing your nausea. Your physician will question you about the severity and timing of your symptoms. They will also ask you about your daily diet and if you have been in contact with any sick people. You may also undergo a physical exam, blood, and urine tests. Depending on the severity of your situation, your doctor may recommend that you have imaging done or that you visit an emergency room.

If the cause of your nausea is from medical treatment that you are receiving due to an illness, then your doctor will know how to treat your side effects.

Drugs used to treat nausea and vomiting are called antiemetics. Some of these medicines affect the brain and block signals to the vomiting center, while other medications work on the gut. Some of these speeds the process of how quickly food moves through the GI system.

Some Medicines Used to Treat Nausea

Side Effects of Traditional Medicine

Before taking any pharmaceutical medication, it is always best to ask your doctor about the side effects. Also, it is always best to read the packet labels to understand what you are putting into your body. Common side-effects may include constipation, headaches, tiredness, insomnia, indigestion. 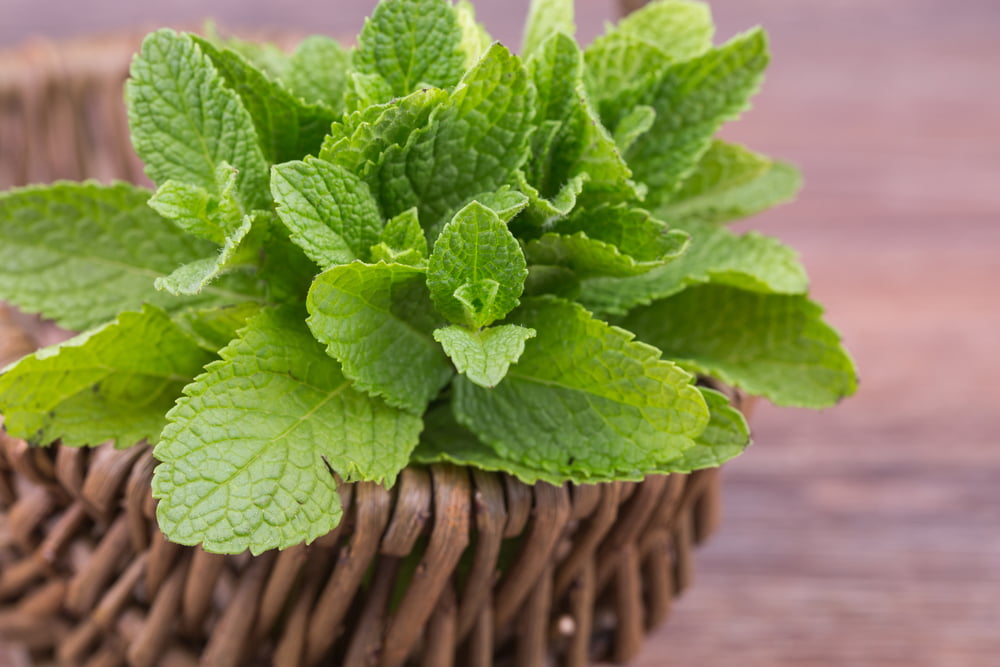 If you are experiencing nausea due to side effects of an illness or treatment, then these home remedies may not 100% cure you, but they may provide some relief.

What is essential is to understand the cause so that you can decide the most appropriate treatment. For example, cancer-related nausea may require a different response than nausea brought on by motion sickness.

Since ancient times people have turned to ginger as the ultimate cure. Furthermore, studies have shown that ginger can be a very effective treatment for some kinds of stomach problems due to its natural anti-inflammatory properties.

Peppermint is another traditional remedy that has been around for centuries. According to the NCCIH, peppermint leaves and peppermint oil may be beneficial in dealing with indigestion and irritable bowel syndrome that are associated with nausea. Furthermore, we recommended peppermint oil due to its antiemetic and antispasmodic effects on the gastric lining and colon.

For thousands of years, Eastern practitioners have been manipulating pressure points to treat different physical symptoms, including nausea. Acupuncture is when doctors insert thin needles into the skin, while acupressure is the process of applying physical pressure to specific points of the body. According to a 2015 study, acupressure to the wrist significantly reduced nausea and vomiting in cardiac surgery patients.

Medical cannabis is another form of treatment that dates back over thousands of years. In the 1970s, positive evidence of cannabis’ cancer applications led researchers to investigate its effect on chemotherapy-induced nausea through synthetic THC pills.

Furthermore, evidence of CBD’s ability to reduce nausea has also caught the headlines in recent times. Numerous publications have provided strong support for the combined action of cannabinoids found in medical cannabis.

Over the last few decades, studies have demonstrated that cannabinoids are an effective treatment in combating vomiting in animals in response to a toxic challenge, for example, chemotherapy in humans.

Other researchers at Temple University School of Medicine found that various cannabinoid receptors play a role in the regulation of food intake, gastric secretion and gastroprotection, nausea and vomiting, intestinal inflammation, and cell proliferation in the gut.

Research is still in early stages regarding medical marijuana and nausea. However, many doctors are aware of marijuana’s healing properties. They will often recommend cannabis to many patients in need of an efficient way of controlling their nausea. 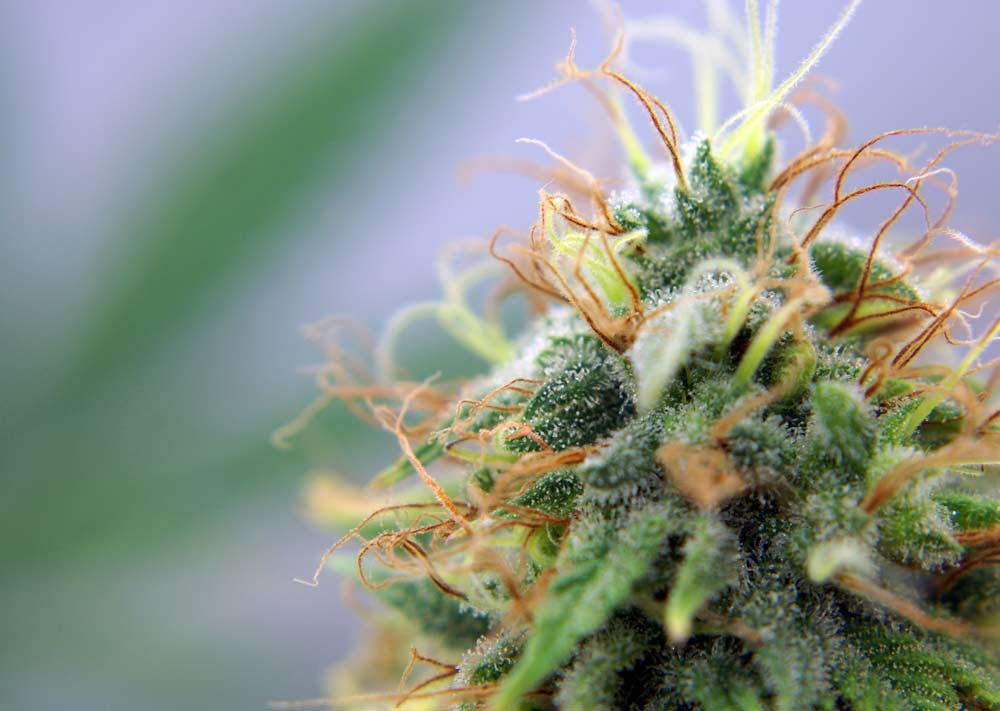 The growth in the cannabis industry has led to the development of a wide range of different strains.

From hybrids to crossbreeds, we’ve rounded the five best marijuana strains to treat nausea. The following represents our recommendations based on the data we’ve been able to gather together (including anecdotal evidence). Please note that we did not test these strains head-to-head to compare their efficacy. It is possible that other strains are better at reducing nausea or that these strains will not work as well for you. 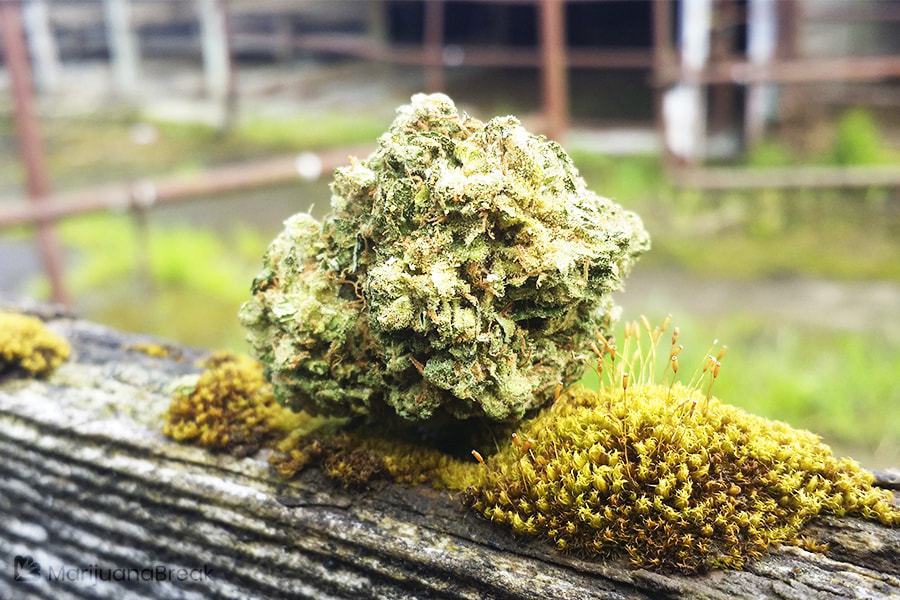 This strain provides a killer punch, and those using it may experience a boost of energy together with an intense euphoric high. Reportedly containing up to 25% THC, Durban Poison is known for getting the job done. It may provide immediate relief and is known for helping patients with some illnesses, including ADD/ADHD, migraines, paranoia, and nausea. 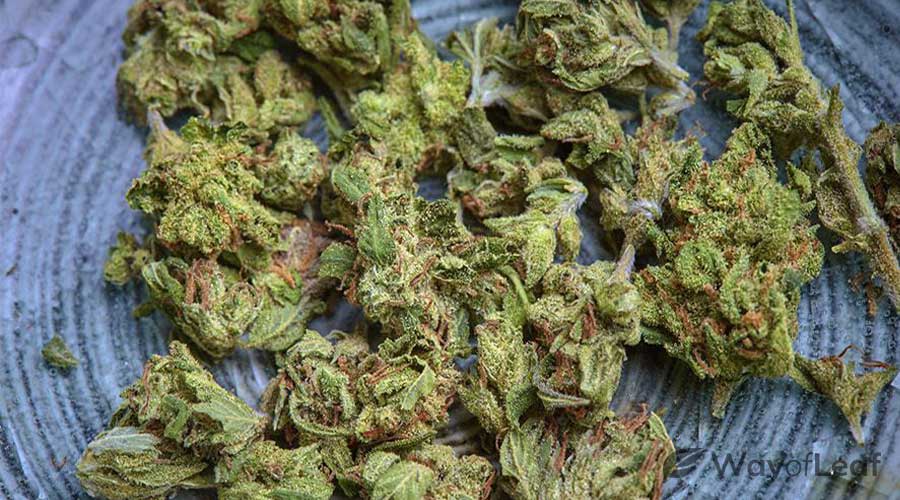 This strain is so common that you can probably pick it up at any dispensary; any time, any place. While it is known for providing a relaxing yet energizing high, it is more popular among patients due to its healing powers. Sour Diesel’s THC levels tend to be in the 21-22% range. People with a variety of medical conditions often use this strain. Some of these conditions include depression and migraines, and it is an excellent choice to help alleviate nausea. 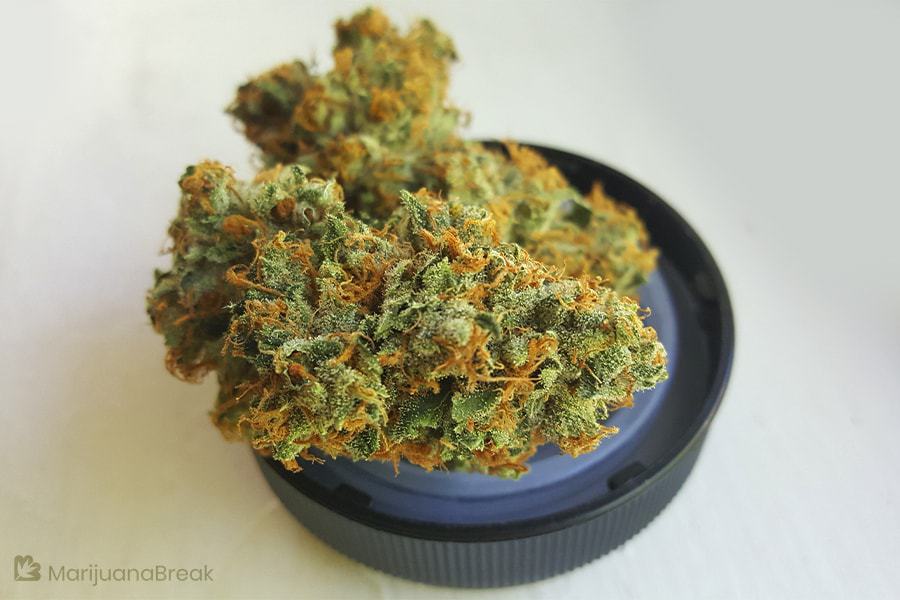 This high THC-infused hybrid strain promotes an uplifting experience and combats nausea and migraines. Many consider OG Kush to be the perfect evening strain. It is a very popular choice for those suffering from some illnesses that may cause nausea and vomiting. 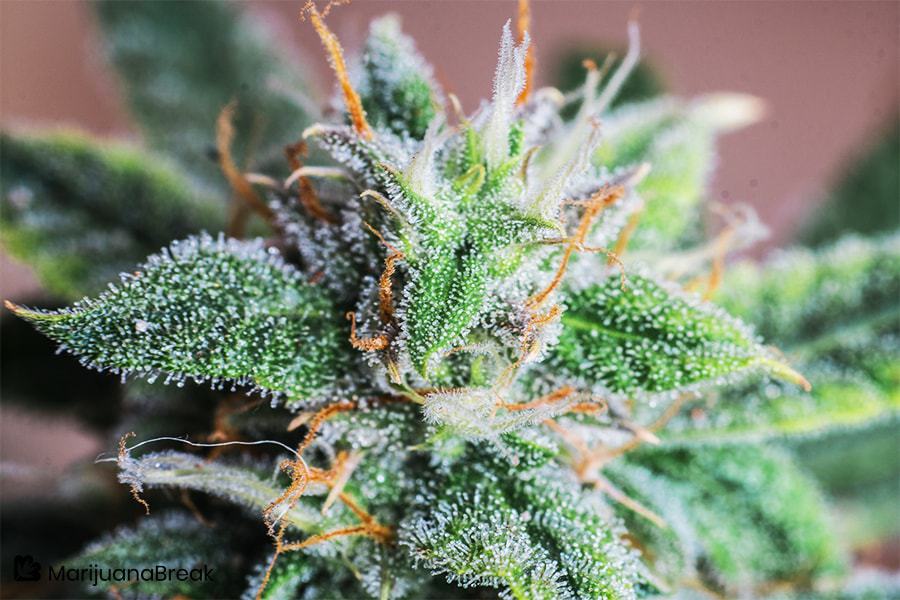 Blue Dream is one of those go-to strains that may be helpful for a variety of medical conditions, including nausea. Medicinal marijuana consumers say that Blue Dream can help to alleviate all types of stress and anxiety. 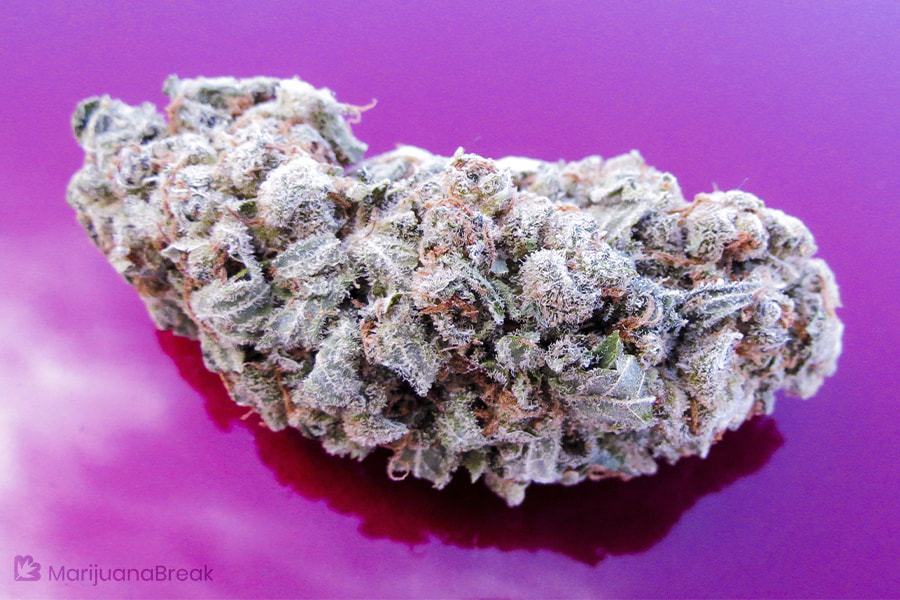 Jack Herer has become quite popular among patients and cannabis enthusiasts due to its purported medical properties. The fact that it provides a clear-headed and balanced high makes it perfect for daytime use. Jack Herer was developed in the mid-1990s in the Netherlands. Pharmacies in the Netherlands later distributed it as a recognized medical-grade strain.

When it comes to cannabis and marijuana, there is no right or wrong – it’s all a question of what works for you. Let us know your thoughts and which strains have worked best for you in the past in the comments below or on our Facebook page.