Written by Editorial Team
3 min read
1 comments
Read Later
All information on this website is for general informational purposes only and is not intended or implied to be a substitute for professional medical advice, diagnosis or treatment.
Platinum Cookies Strain Overview
Platinum Cookies is a stress-relieving and ultra relaxing strain that can do wonders for calming down and reducing anxiety. It is a hybrid cross between OG Kush and Durban Poison (both super potent buds) - so it’s no wonder Platinum Cookies is so powerful. This strain has a delicately sweet and flowery taste as well, so it’s the perfect note to end a busy and hectic day. 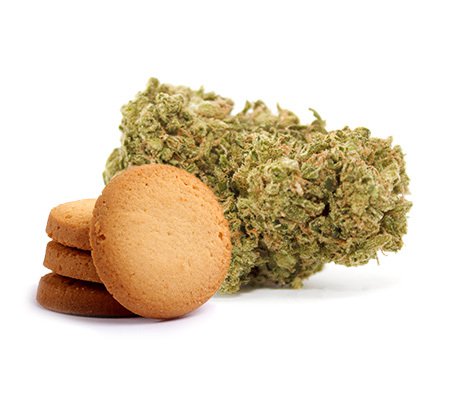 One of the most remarkable features of Platinum Cookies is the strain’s ability to induce relaxation and relieve stress. This effect is bound to make the strain even more attractive for those caught up in the high-pressure gears of modern life.

We live in a politically turbulent time in which more and more people are stressed about work, money, and relationships. It is no surprise that mental health conditions such as anxiety and depression are rife and, unfortunately, it doesn’t look as if things are about to change any time soon.

Platinum Cookies is a slightly indica-dominant (60%) hybrid that evolved from the renowned Girl Scout Cookies. This strain has some top-quality genetics. It’s a cross between the famous OG Kush and Durban Poison, a traditional landrace strain originating from South Africa.

Although OG Kush is well-known and has fathered many other great strains, its exact heritage is uncertain. Durban Poison, on the other hand, is a pure sativa, a feature that is increasingly rare in this day and age.

Being 100% sativa, you might expect Durban Poison to have energizing, uplifting effects. If this is the case, you certainly wouldn’t be disappointed. Thankfully, these fantastic qualities have passed on to Platinum Cookies, where they combine beautifully with the relaxing, full-body high of its other parent, OG Kush.

There is no doubt that this strain is powerful, and it may be best to avoid it if you are new to the marijuana scene.

The Platinum Cookies strain is indeed a sight to behold, with a thick layer of crystalline trichomes covering dense buds with hues of purple and dark green. Bright orange pistils intersperse the buds, adding further to the visual appeal of this strain. 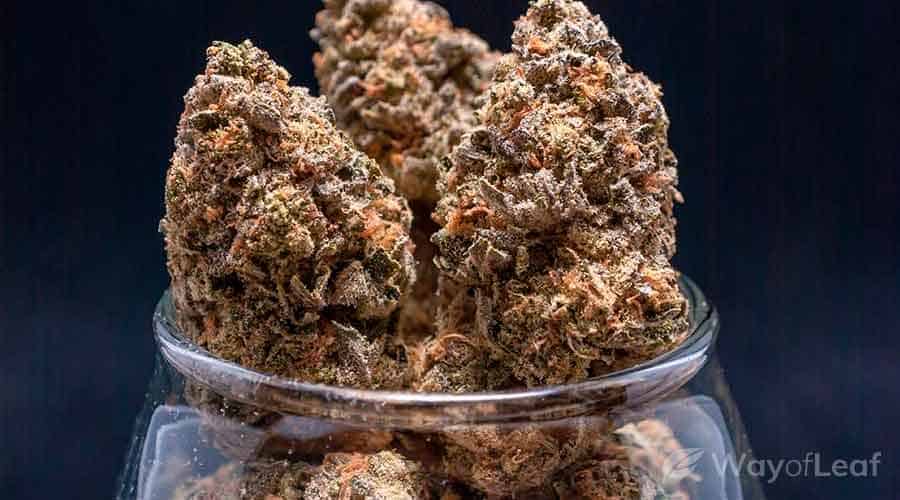 The aroma of Platinum Cookies is fuel-like, with just a hint of pine. The flavor, however, is sweeter, with earthy and even floral notes.

So we know Platinum Cookies looks and tastes great. But how about its effects?

Due to its outstanding genetics, Platinum Cookies produces a well-balanced and enjoyable high, simultaneously mellow and uplifting. When you smoke Platinum Cookies, you will feel deeply relaxed and euphoric, and the high can last as long as a few hours.

This strain does have slightly sedative effects, meaning that you could be hit with couch-lock if you aren’t careful. Platinum Cookies is not necessarily a great morning, get-up-and-go strain. However, if you are looking for something to help you unwind after a hard day, it could be the perfect solution.

Why Is Platinum Cookies So Good for Stress Relief?

Stress is something that affects everyone from time to time. The big difference is how we deal with it. Some people seem to thrive under pressure, whereas others crumble at the slightest hint of it. Our bodies are all wired more or less the same, so what is it that makes some people so much more able to deal with stress than others?

When we feel under threat, our sympathetic nervous systems kick in. Our breathing and heart rates increase, blood rushes to our muscles, and non-urgent functions such as digestion and immunity temporarily switch off. From an evolutionary point of view, this ‘fight or flight’ reaction prepares us to act swiftly in the face of danger, for example, being chased by a wild animal.

Although this is pretty unlikely to happen in this day and age, our bodies are still engineered in much the same way they were thousands of years ago. And it doesn’t matter whether you’ve stumbled across an angry bear or a vicious email from your boss; your nervous system still responds in the same way.

Cannabis and Coping with Stress

The key to coping with stress is finding ways to neutralize your fight or flight response, and turning down your sympathetic nervous system. Some people do this with exercise while others swear by meditation. Some people enjoy a glass or two of wine in the evening, and others prefer a good smoke.

The reason why so many people find cannabis helpful for stress is because it has a profound effect on the nervous system. The psychoactive compound in weed, THC, mimics the action of a chemical called anandamide which our bodies produce naturally. Some people have dubbed anandamide as the ‘bliss molecule.’

Anandamide is an endocannabinoid and a vital part of the endocannabinoid system. This system is intricately involved in many of our biological functions and plays a crucial role in maintaining homeostasis.

Anandamide binds with receptors in the brain and nervous system known as CB1 receptors. Here it acts as a neurotransmitter and has a powerful influence over mood, pain perception, and memory.

Research has shown that anandamide production increases in response to stressful stimuli. It may offer some protection against the symptoms of anxiety. Endocannabinoids such as anandamide may also interrupt the hypothalamic-pituitary-adrenal (HPA) axis, which is responsible for releasing the stress hormone cortisol.

As well as simulating these effects, THC boosts production of another neurotransmitter, dopamine. Dopamine is one of the brain’s ‘happy chemicals’ and part of the reward response.

When you consider this, it is no wonder that strains like Platinum Cookies are so useful for relieving stress. One 2014 study on medical marijuana for PTSD found that the herb offered as much as a 75% reduction in symptoms; a result which is certainly not insignificant!

This strain is wonderfully relaxing and acts as an effective stress-reliever. Therefore, Platinum Cookies can be useful for a range of mental health issues such as anxiety, depression, and PTSD. It could also help with symptoms such as headaches and migraines which often accompany stress.

Besides this, the body-high that comes alongside the uplifting effects of Platinum Cookies can help to melt away chronic pain. Patients also sometimes use it to soothe a variety of other symptoms such as nausea.

The most common side effect of Platinum Cookies is dry mouth and dry eyes. You can easily combat these effects by keeping a drink handy and staying well-hydrated.

It is also possible that this strain could make you feel too relaxed, leading to couch-lock and fatigue. Another potential side effect is anxiety or paranoia. However, this is not as common as it can be with some high-THC strains.

If your appetite has been piqued and you fancy whipping up your own batch of Cookies, you will be happy to learn that this is a reasonably hardy strain. It is resilient to pests and moderately difficult to grow.

Platinum Cookies has an average flowering time of around 9–10 weeks. When growing this strain outdoors, you can expect it to be ready to harvest by mid-October.

One possible downside is that this strain is not one of the highest yielding out there.

The plants are relatively small in stature and provide up to 16 oz per plant outdoors, and 12 oz per square meter indoors. However, the potency of this strain more than makes up for the moderate yield. Growing Platinum Cookies is definitely a quality over quantity affair!

Final Thoughts on Platinum Cookies: Why Is It So Good for Stress Relief?

Platinum Cookies is a marijuana strain with great genetics, and that is apparent both in its appearance and its effects. It is a relaxing and uplifting strain and is most often used to help with stress and other mental health issues such as anxiety and depression.

That said, we are not doctors, and if you are suffering from any of these problems, it is really important that you get professional advice before self-medicating with marijuana. Your physician will be able to tell you whether this treatment is suitable for you and give you advice on other ways to manage your stress levels.

If you have tried Platinum Cookies for stress or any other conditions, we would love to hear from you. Please go ahead and tell us about your experiences in the comments below.