We have barely scratched the surface when analyzing the marijuana plant. As far as the mainstream is concerned, the only compounds that matter are THC and CBD. THC and CBD are the two most abundant cannabinoids in cannabis and are the subject of the most significant level of research.

THC and CBD are the two most abundant cannabinoids in cannabis and are the subject of the most significant level of research.

However, we are doing the magnificent plant a grave injustice. It has well over 100 cannabinoids and more than 200 terpenes. Research studies have indicated that there is potentially more than meets the eye with these hidden compounds.

The phellandrene terpene is a prime example. It is a lesser-known terpene seldom researched, but it could have some genuine medical benefits. Until marijuana prohibition ends in the United States, it will prove challenging to delve deeper into a plant that requires a LOT of investigation.

We Explore ‘What Are Terpenes?’

There are over 20,000 terpenes, and the marijuana plant only contains about 1% of them! Terpenes are what enable us to smell the beautiful aromas of citrus fruits and essential oils. Marijuana strains with a relatively high terpene content smell and taste fantastic. Terpenes are even responsible for lavender’s relaxing effects.

According to the ‘entourage effect,’ marijuana’s potential healing effects are as a result of the terpenes, cannabinoids, and flavonoids combining. Terpenes could reduce or intensify the potency of your high.

Related article
What Is the “Entourage Effect”? [Thoroughly Explained]

In general, marijuana flowers contains around 20-30% cannabinoids and less than 2% terpenes. However, improved breeding techniques and technological advances mean that some strains can have up to 7% terpenes. If a plant has a single terpene that comprises at least 2% of its total compounds, the impact and flavor will stun you.

You may have heard of terpenes such as myrcene, pinene, limonene, and linalool. These terpenes are among eight ‘primary’ terpenes because they are the most abundant ones in weed.

There is also a list of 20+ ‘secondary’ terpenes. These compounds are not well-researched, but there is some data on them. Phellandrene is one of the most interesting of these secondary terpenes.

Phellandrene: What Can It Do for Me?

It’s hard to say due to the lack of research. Federal prohibition has impacted studies. The organic compounds, alpha-phellandrene, and beta-phellandrene, were used in holistic medicine for a long time and were officially discovered over a century ago. Before their discovery, researchers assumed these compounds were pinene and limonene.

Once tested in eucalyptus oil, researchers found that the compounds comprised a pair of isomeric compounds rather than one as initially thought. 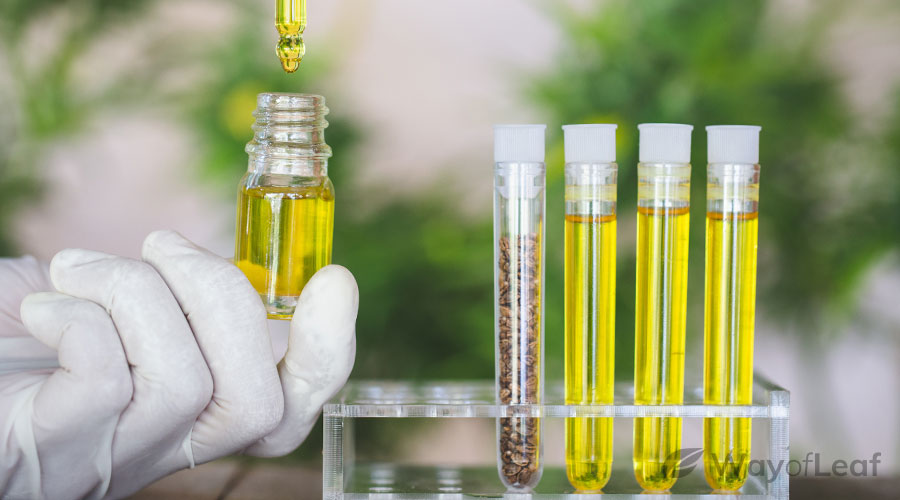 Phellandrene is easy to absorb. As a result, it has become a popular addition to cosmetic products, like many other terpenes. It is ‘mysterious,’ but you can find it in essential oils such as:

The two organic compounds share similar chemical properties and molecular structures. They are technically known as monoterpenes and are ‘double-bond’ isomers. You will find alpha-phellandrene mainly in eucalyptus oil. Beta-phellandrene is isolated from the oils of Canadian balsam and water fennel.

Both compounds are not water-soluble but are miscible. In other words, you can mix them in ether. If you mix them with ether, you can create something similar to the colognes and perfumes you purchase.

Incidentally, you are potentially benefiting from phellandrene if you enjoy forest-fresh fragrances. In cuisine, these compounds could feature in dill potato salad, cinnamon French toast, or even mint chocolate chip ice-cream.

There is some research on the effects of the compound. A study by Tisserand and Young, in Essential Oil Safety (Second Edition) in 2014, investigated alpha-phellandrene’s effects. The researchers discovered that the compound helped to reduce pain sensitivity and increased energy levels.

However, it also found that it could cause adverse skin reactions in certain situations. For example, undiluted alpha-phellandrene was ‘moderately irritating’ to rabbit skin. At a concentration of 8%, it was not sensitizing, although it produced one reaction at a 4% concentration in 25 volunteers. Also, a 5% concentration was sensitizing to 4 out of 11 patients with dermatitis.

A 2015 study by Piccinelli et al., published in Nutritional Neuroscience, looked at the antidepressive and antihyperalgesic actions of alpha-phellandrene and limonene. The study tested the compounds on rodents and found that, in combination, the terpenes produced desirable properties. However, the team did not determine whether phellandrene would display the same traits by itself.

As an aside, it seems as if phellandrene could have benefits as a fungicide. A 2017 study by Ji-hong Zhang, published in Botanical Studies, looked into this issue. Researchers measured the ability of alpha-phellandrene to inhibit the growth of fungus on post-harvest tomatoes and other plants. It transpired that the terpene showed an ability to control the Penicillium cyclopium fungus in the tomatoes.

The main issue is that the studies in question were either conducted on rodents or in tiny sample groups. The other problem is that phellandrene is not available in large concentrations in any marijuana strain. It is found in the following strains, but only in minimal quantities:

Research to date has not found evidence of phellandrene providing beneficial effects based on the tiny amounts found in various weed strains.

Phellandrene could have therapeutic potential, but research is limited. Even if it is a beneficial terpene, the quantities are so small that it is unlikely to affect. If this seems like a problem, modern breeders and scientists have possibly found a solution. Proponents of terpenes say it is essential to focus on maximizing terpene content post-harvest rather than settling for a high THC or CBD level.

Proponents of terpenes say it is essential to focus on maximizing terpene content post-harvest rather than settling for a high THC or CBD level.

At present, there are vaporizer companies selling e-liquids with 20% terpenes, 40% THC, and 40% CBD. If researchers conclusively find that phellandrene, or any other terpene for that matter, is highly beneficial, you can bet that some company will sell it!

While there are already thousands of marijuana strains, many of them focus on THC or CBD. In the future, it seems likely that a slight shift towards terpenes is inevitable, and it is already happening. If terpenes are the way forward, savvy cannapreneurs will find a way to bring them to the public in more significant quantities.