Written by Editorial Team
7 min read
3 comments
Video
Read Later
This article may contain links to some of our affiliate partners. These are brands we trust and brands we feel represent the highest quality standards. When clicking links, we may earn commissions to help support our site. Learn more by reading our full disclaimer.

For decades, we have attributed the effects of cannabis to active cannabinoids like tetrahydrocannabinol (THC) and cannabidiol (CBD). However, scientists have recently discovered that cannabinoids such as CBG, THCV, THCA, and CBN also play a role in the plant’s potential therapeutic effects.

It is also becoming more evident that marijuana contains another class of active compounds; terpenes. They are aromatic chemicals responsible for giving marijuana its wide range of tastes and aroma. In addition to their unique smells and flavors, terpenes may play a crucial synergistic role that allows cannabinoids like CBD to have a therapeutic effect.

This article discusses a few of the most common terpenes. We look at their possible effects on the human body and whether they enhance the effects of cannabinoids.

How Cannabinoids Work in the Body

To understand how cannabinoids work in the body, we must first briefly describe the endocannabinoid system (ECS). It is a cell-signaling system uncovered in the 1990s that’s involved in the regulation of various functions, including:

There are also enzymes that break down endocannabinoids once they have completed their task.

How Cannabinoids Interact with the ECS

The cannabinoids in cannabis interact with the ECS differently. For instance, THC binds to CB1 and CB2 receptors. The result is a powerful intoxicating effect. CBD, in contrast, doesn’t bind to receptors in the same way. Indeed, it seems to affect them indirectly and potentially prevents other endocannabinoids from being broken down. There is also a theory that CBD binds to an undiscovered receptor. 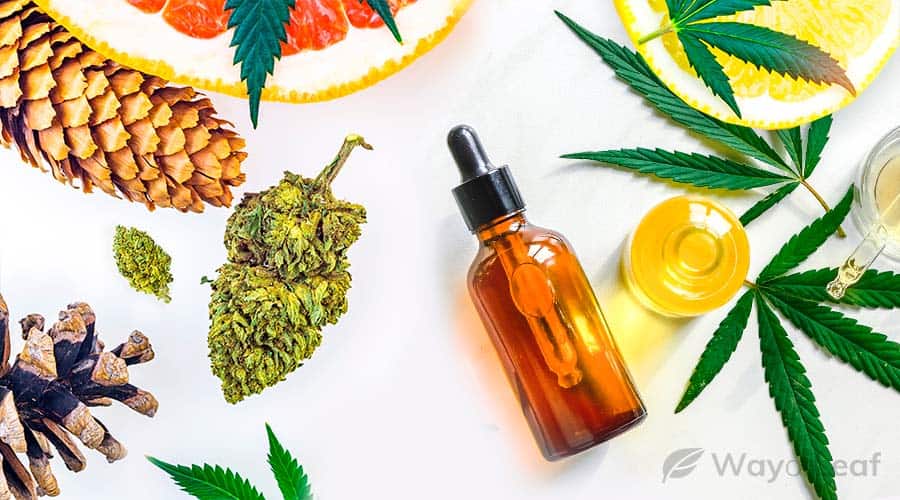 Another suggestion is that an endocannabinoid deficiency is responsible for a variety of medical issues. The goal of the ECS is to keep the body in a state of balance or homeostasis. A failure to do this, potentially due to a lack of endocannabinoid production, could result in illness.

A study published in 2016 suggested that an endocannabinoid deficiency could explain why some people develop IBS, fibromyalgia, and migraine. It would also help clarify why consuming cannabinoids via cannabis or hemp could help with symptoms.

What Are Terpenes & What Can They Do for You?

Terpenes are not unique to marijuana. These compounds are commonly found in the majority of vegetables and edible herbs. Their chemical structure makes them aromatic molecules. As a result, they are responsible for giving marijuana its vast array of unique flavors and intense aromas. In the wild, it’s believed that these aromas have evolved to ward off insects, fungus, and other would-be predators.

In terms of function, the aromatic properties of terpenes are far from their only physiological effect.

For example, a 2011 study published in the British Journal of Pharmacology found that beta-caryophyllene – a common terpene found in many herbs (including cannabis) – has gastro-protective properties. It could help combat ulcers, inflammation, and even autoimmune disorders.

This makes sense since a 2020 study outlines beta-caryophyllene’s ability to physically bind to CB2 receptors in the body’s immune response system, where it acts as a full agonist. It was once believed that CBD and THC were the only active cannabis compounds that could bind to endocannabinoid receptors.

In terms of their chemical structure, terpenes are quite similar to cannabinoids. They are secreted from the same part of the plant (the resin glands). The key structural difference comes in the form of a repetitive aromatic 5-carbon ring called isoprene, which is not found in cannabinoids like CBD and THC.

Estimates vary, but research suggests there are at least 150 different terpenes in the plant. Even so, the effect of specific terpenes is not yet well-studied in cannabis. We know very little regarding their functions in the body. However, what is widely accepted is the idea that terpenes play major synergistic roles with active cannabinoids.

This means the effects of both THC and CBD are likely largely due to the presence and function of terpenes.

For example, researchers have documented therapeutic benefits for both CBD and THC in their pure, isolated molecular forms. Yet, it is widely believed that their effects on the body are greatly amplified when administered as a full-spectrum unit. This phenomenon is known as the ‘entourage effect,’ which we will outline later.  A full-spectrum extract contains most, if not all, of the cannabis plant’s compounds.

Also, it is believed that marijuana’s intoxicating “high” is due to the presence of various types of terpenes. It is plausible since you can get a dozen distinct highs from a dozen different marijuana strains with the same level of THC.

The differences between these strains’ effects may be due to their terpene profiles. Also, it is worth noting that Strawberry Cough and Northern Lights have very distinct aromas and flavors from one another.

Many budtenders claim consumers spend too much time focusing on a strain’s THC content. They recommend looking into certain terpene profiles instead.

If marijuana isn’t legal in your state, an alternative is to focus on full-spectrum CBD products derived from hemp. Although there are some exceptions, most states permit CBD from hemp as long as the THC content is no higher than 0.3%.

Full-spectrum CBD tinctures by brands such as PureKana, for instance, contain dozens of compounds, including cannabinoids and terpenes. Broad-spectrum products are similar, barring the fact they contain zero THC.

What Are Some of the Most Common Terpenes in Marijuana?

While cannabis contains 150+ terpenes, only a handful are present in large enough quantities to produce noticeable effects. Here are several of the most common cannabis terpenes in marijuana.

This natural terpene is abundant in the lavender plant. Any cannabis strain with a wonderful lavender scent is likely very high in linalool. It is linked with benefits such as its ability to reduce the effects of stress, anxiety, and depression. When applied topically, it could act as a great natural medication for acne and other skin conditions.

Myrcene is probably the most common cannabis terpene. It has a dank, earthy, musky smell similar to cloves. In terms of its synergistic effects, it could act as an excellent muscle relaxer and help relieve pain and inflammation. It’s also a sedative and exists in high quantities in marijuana strains that produce couch lock.

This is the “citrusy” terpene. Any cannabis strain with a pungent citrus aroma, such as Agent Orange or Lemon and Citrus Kush, is high in limonene. As far as effects, it could work as an anti-seizure therapy. It may also improve mood and relieve heartburn and acid reflux. Additionally, clinical research has outlined its ability to help dissolve gallstones and kill microbial bacteria, among other things.

This terpene is highly abundant in natural pine oils and gives marijuana strains like Jack Herer and Chemdawg that classic “piney” smell. It is the most common plant terpene globally, and it is considered a viable part of therapy for asthma patients. Furthermore, it’s also said to improve memory, alertness, and general energy levels.

This terpenoid is found naturally in many edible herbs like oregano and black pepper. As it binds to CB2 receptors in the immune system, it could have synergistic roles in managing inflammation and autoimmune conditions. It might also help fight against ulcers and work as a gastro-protectant.

Are Cannabinoids and Terpenes Better Together? Analyzing the Science

It seems as if both cannabinoids and terpenes offer a multitude of benefits. They can enhance cortical activity, increase blood flow, and reduce anxiety. However, when combined, they act synergistically to produce even more noteworthy benefits via the entourage effect.

According to this theory, a combination of cannabinoids, terpenes, and other compounds offer stronger effects than any cannabinoid or terpene alone. It is one reason why sellers of CBD and THC products try to offer full-spectrum options.

Ethan Russo has written at length about the possibility of this phenomenon existing. In a 2018 study, he wrote, “the case for cannabis synergy via the “entourage effect” is currently sufficiently strong as to suggest that one molecule is unlikely to match the therapeutic and even industrial potential of cannabis itself as a phytochemical factory.”

Researchers have found that a combination of terpenes and cannabinoids could have anxiolytic and antidepressant effects.

A 2020 study by other researchers found that a combination of terpenes and cannabinoids could have anxiolytic and antidepressant effects.

However, a review of studies by Peter S. Cogan, published in Expert Review of Clinical Pharmacology in 2020, was scathing in its criticism of the idea of an entourage effect. Cogan suggests claims of this nature are unsubstantiated and mainly entertained for marketing purposes.

A 2019 study published in Cannabis and Cannabinoid Research also suggests the entourage effect does not exist. The researchers found that the most abundant terpenes in Cannabis sativa did not modulate the functional activity of the CB1 and CB2 receptors.

It is clear there is significant disagreement within the scientific community regarding the entourage effect.

It wouldn’t be relevant to label either terpenes or cannabinoids as being any better or worse than the other – in truth, it’s actually believed that they work in sync with one another rather than producing distinct, individualistic effects.

What is widely believed to be true, however, is that terpenes – due to their influence on THC activity in the central nervous system – are actually what gives marijuana its distinct highs and varying psychoactive effects from strain to strain.

While we don’t know exactly the specific role that cannabis terpenes play in human physiology, we do know that without them, the medical, therapeutic, and psychoactive effects of cannabinoids like THC and CBD would not be nearly as relevant as they are.