Most people know that smoking tobacco causes lung problems like bronchitis, but what about cannabis?

The plant is becoming more popular, both for medicinal and recreational use. And the most common way of consuming it is by smoking, either in a joint, spliff, pipe, or bong. This poses a dilemma for those wishing to improve their health, as smoking can adversely affect the lungs.

However, there is plenty of confusion surrounding the question of whether cannabis smoke is as harmful as tobacco. Some research has even suggested moderate marijuana use could have positive effects on specific aspects of lung function.

So, does cannabis cause bronchitis, or is this just a myth? Let’s take a look at the evidence.

The term bronchitis simply means inflammation of the bronchi. These structures are cartilage tubes that lead from the trachea (airway) to the lungs.

Bronchitis can either be acute or chronic. Acute bronchitis is a common problem and often occurs due to a viral or bacterial infection. It usually resolves quickly once the infection itself has cleared.

Up to 75% of people with chronic bronchitis are either smokers or ex-smokers.

Chronic bronchitis, on the other hand, usually occurs due to exposure to irritating substances over time. These include air pollution, chemical fumes, and of course, smoke. In fact, smoking is the most significant cause of chronic bronchitis. Up to 75% of people with the condition are either smokers or ex-smokers.

When smoke repeatedly irritates the bronchi, they become inflamed and begin to produce excess mucus. This leads to a variety of respiratory symptoms, including:

One might assume that smoking cannabis is just as likely to cause bronchitis as smoking tobacco. However, the situation is not straightforward. Indeed, research has suggested that smoking marijuana could have some very unexpected effects on lung function.

How Does Cannabis Affect Lung Function?

Smoking any substance, tobacco, cannabis, or otherwise, is going to harm the lungs. However, research published in JAMA in 2012 indicates that marijuana could affect lung function in an unpredictable way.

The study included data from 5016 men and women across the United States. The researchers asked participants about their smoking habits, including both cigarettes and marijuana.

They also measured the participants’ forced expiratory volume (FEV1) and forced vital capacity (FVC). Both measures involve breathing in as fully as possible, then forcibly exhaling into a device that records the volume of air.

FEV1 indicates how much air a person breathes out within the first second of expiration. Meanwhile, FVC indicates the total capacity of the lungs. Both FEV1 and FVC scores can help in the diagnosis of lung problems like bronchitis.

Unsurprisingly, the cigarette smokers had lower scores on both FEV1 and FVC. However, for low-level cannabis smokers, the opposite was true.

Could it be even more harmful …

The results showed that low-level cannabis users had increased FVC and FEV1 scores.

These results remained true up to seven ‘joint years,’ with 365 joints being equal to one joint year. At this point, FEV1 scores began to level out, and by ten joint years, they began to decrease. The most significant decreases were in heavy smokers (more than 20 episodes per month).

There are several possible explanations for these findings. Firstly, THC acts as a bronchodilator, relaxing the airways. It is also anti-inflammatory.

Secondly, marijuana smokers tend to inhale more deeply than tobacco smokers and hold the smoke in for longer. By doing this, they could be unintentionally stretching their lungs and increasing their vital capacity.

The authors conclude by suggesting that occasional marijuana use “would not have significant adverse consequences on pulmonary function.”

Does Smoking Cannabis Cause Bronchitis?

Although the results of the 2012 research are fascinating, they do not answer the question, ‘does cannabis cause bronchitis?’

Unfortunately, despite cannabis enhancing some aspects of lung function, it can still cause bronchitis. However, once again, the situation is not as straightforward as it seems.

A 2016 review for NDJ Primary Care Respiratory Medicine explains why. It states in its opening paragraph that both tobacco and cannabis cause chronic bronchitis. However, it then goes on to describe some of the difficulties in researching the subject.

For example, many research studies use joint years as a way to measure the amount of cannabis that a person smokes. However, it does not consider differences in the size of joints and whether a filter is used or not. It also fails to take into account different strains with different cannabinoid and terpene contents.

Another issue is that many cannabis smokers also smoke tobacco, either together with cannabis, or separately. All these factors make it challenging to assess the exact impacts of smoking marijuana on lung health. 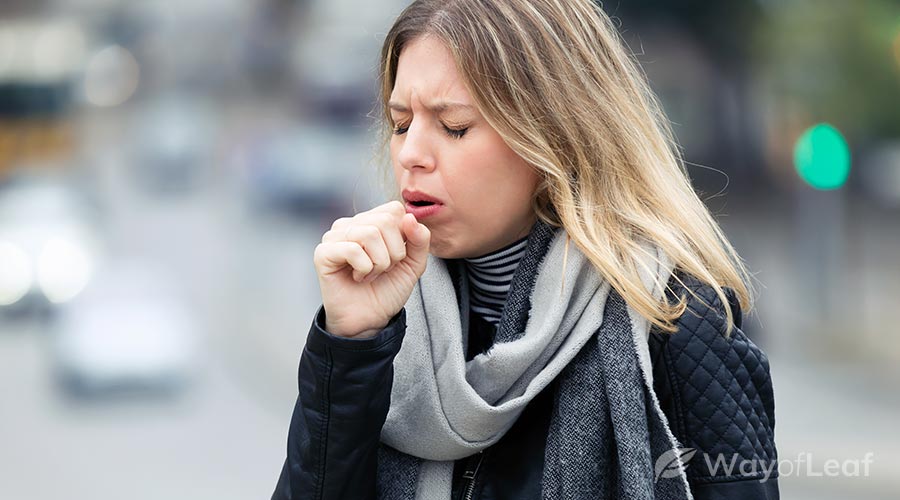 However, the bottom line is that smoking anything, cannabis included, has the potential to cause bronchitis. Chronic users may experience coughing (especially in the morning), excessive mucus production, and wheezing.

It may also contribute to various other lung problems, including bullous lung disease and pneumothorax. The former is a condition in which air pockets form inside the lungs. The latter is the medical term for a collapsed lung.

The good news is that ten years after quitting, the risk of developing chronic bronchitis returns to the same levels as non-smokers.

So, how about vaping marijuana? Does it have similar effects?

When vaping first hit the mainstream, many people saw it as a safer alternative to smoking cannabis. However, a recent rise in the number of people suffering from vape-related lung problems has caused some serious doubts.

The Centers for Disease Control and Prevention explains that much more research is necessary to understand the effects of vaping. It suggests that although it may be a safer alternative to smoking, it is not without risk.

Therefore, people who have never smoked or used vape products before should not start. But what are the other options for using cannabis without smoking?

Fortunately, there are many ways to use marijuana without jeopardizing one’s lung health.

For years, the only options for non-smoking marijuana lovers were cannabis-infused edibles. These products remain popular today and provide an enjoyable way to consume cannabis. However, dosing edibles can be tricky, and it is easy to go overboard. This fact alone puts many people off using them.

Luckily, nowadays, there are plenty of other options too. Dabbing is becoming more popular and involves using highly concentrated cannabis products such as wax or shatter on a dab rig.

Other options include oils, tinctures, capsules, topical creams, and patches, to name a few. As the industry advances, more and more novel ways to use cannabis are emerging. This is great news for anyone who wants to enjoy marijuana without risking bronchitis or other lung problems.

Read about the pros and cons of these methods in our article: How to Use Cannabis… Without Smoking It

Does Cannabis Cause Bronchitis? Final Thoughts

Many people consider smoking cannabis to be safer than smoking tobacco. Furthermore, research has suggested that low-level use does not negatively impact certain aspects of lung function.

However, smoking any substance, cannabis included, can increase the risk of developing bronchitis and other severe lung disorders.

There is more choice than ever for cannabis consumers who wish to avoid smoking.

Therefore, it is worth investigating the different options available. There is more choice than ever for cannabis consumers who wish to avoid smoking. Consequently, it should be easy to find something to satisfy every need.

So, why not try an alternative consumption method when next at a dispensary? There are many alternative ways to enjoy marijuana without causing bronchitis and lung disease.