Borderline personality disorder, or BPD, is a mental health condition that affects as many as 1.8% of the general population and 15% of psychiatric inpatients. BPD is characterized by a collection of symptoms, one of which is a tendency toward substance abuse.

The World Health Organization states that cannabis is the most common illicit substance, with around 147 million users worldwide. Therefore, it makes sense that there is a lot of overlap between cannabis use and borderline personality disorder.

This article explores this relationship and whether cannabis may be helpful or harmful for those suffering from BPD.

What Is Borderline Personality Disorder?

BPD is a common personality disorder that usually surfaces during adolescence or early adulthood. It tends to affect females more than males.

BPD can often occur alongside other mental health conditions, making it challenging to identify. According to the National Institute of Mental Health, doctors usually reach a diagnosis of BPD if a patient displays at least five of the following symptoms:

It is not unusual for BPD to be accompanied by depression, anxiety, bipolar disorder, eating disorders, or substance misuse disorders.

Experts believe BPD may be a result of a combination of genetic and environmental factors. It tends to affect people who had a disrupted, traumatic, or abusive childhood or to people who may have experienced abandonment at an early age.

Experts believe BPD may be a result of a combination of genetic and environmental factors.

Research has also shown that people with BPD have differences in functional connectivity in different regions of the brain when compared to the brains of healthy individuals. MRI scans indicate that borderline patients have excessive activity in their amygdala, the area of the brain that controls fear and anxiety.

They also appear to have reduced activity in their frontal lobe, the area that regulates emotions. It is unclear whether these changes are an underlying cause or an effect of BPD.

BPD is difficult to treat and does not respond well to medication. The most successful BPD treatments include talk therapy and group therapy. One of the most effective therapies is a treatment called dialectical behavioral therapy (DBT).

Although medication is not particularly helpful for BPD itself, it can be useful in managing some of the symptoms. Doctors may prescribe medication such as antidepressants or mood stabilizers in addition to psychotherapy.

The Link Between Cannabis Use and Borderline Personality Disorder

One of the key symptoms of BPD is impulsive behavior. This includes the use of psychoactive substances such as cannabis. People with BPD may also use cannabis and other drugs to alleviate feelings of boredom or emptiness or to self-medicate their depression and/or anxiety.

Several studies have identified a link between cannabis use and BPD. These include a 2008 study of 99 cannabis-dependent inpatients in an addiction treatment ward. The study investigated the incidence of personality disorders among these patients and found that over one-third of them suffered from BPD.

A further 2012 study suggests that as many as 60% of BPD patients meet the criteria for substance abuse disorders. However, this figure also includes alcohol and other substances, not only cannabis. The authors go on to suggest that substance misuse in BPD increases the risk of poor school performance, unemployment, promiscuous behavior, suicide attempts, and early treatment termination.

However, one of the most interesting studies on BPD and substance abuse was published back in 1990. It suggests that 69% of BPD patients may suffer from substance misuse disorders (24.1% for cannabis).

The thing that sets this study apart from the others is that the authors removed substance abuse from the diagnostic criteria for BPD. They found that 23% of the patients no longer met the BPD criteria when they did this.

These patients had different characteristics from the others, namely less dislike of being alone, fewer feelings of emptiness, and less identity disturbance. Therefore, the authors suggest that drug abuse may be a risk factor for developing BPD as well as a symptom.

The relationship between cannabis and BPD is a complex one. But could it be a suitable treatment for this condition?

Cannabis has significant effects on both the body and mind, which stem from its interaction with the human endocannabinoid system (ECS). The ECS comprises cell receptors known as cannabinoid receptors and chemicals called endocannabinoids.

Endocannabinoids bind with cannabinoid receptors to trigger a variety of physical and psychological changes. In the brain, they help to regulate the activity of neurotransmitters, which are chemicals that influence our mood and emotions.

The cannabinoids that the cannabis plant produces, THC and CBD, work similarly. They have a molecular structure that is much like our natural endocannabinoids. Therefore, they can bind with the same receptors and act directly upon the ECS. 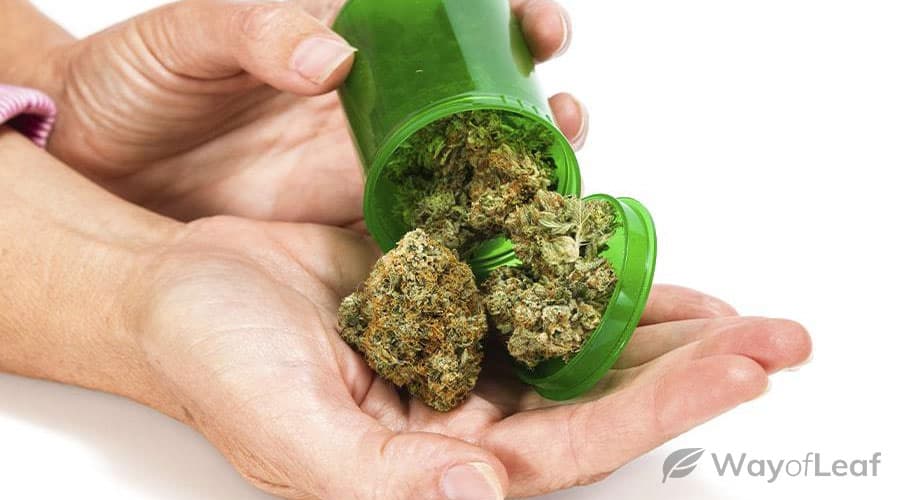 This is why many patients use marijuana and CBD oil to manage mood disorders like depression and anxiety. But does cannabis help BPD in a similar way?

It is unclear precisely what these findings mean. However, scientists have suggested that this imbalance may lead to symptoms such as self-aggression and suicidal behavior. By altering ECS activity, cannabis may possibly help.

Another way that cannabis could potentially help patients with BPD is by reducing activity in the amygdala. This may decrease symptoms such as anxiety and fear. However, users must exercise caution with high-THC marijuana strains. While low doses of THC may help to relieve anxiety, higher doses can actually increase it. In some people, THC can even cause feelings of panic and paranoia.

Therefore, it may be safer for BPD patients to choose a low THC and high CBD marijuana strain. They may even prefer to opt for CBD oil.

Unlike THC, CBD does not produce intoxicating effects. Therefore, it does not have the same potential to cause increased anxiety and paranoia. Many users have reported that CBD helps them to manage anxiety and other conditions like depression.

CBD does not act on cannabinoid receptors directly. It influences the ECS by increasing levels of endocannabinoids such as anandamide. This has a positive effect on mood and could, therefore, help people with conditions like BPD.

Another useful aspect of CBD oil for BPD is its potentially anti-addictive properties. A 2015 review found that CBD may help with various substance use disorders, a significant issue in BPD.

The most common way to consume CBD oil is by placing a few drops under the tongue for up to 90 seconds. It is also available in many other forms, including capsules and edibles, which offer a more convenient method of consumption.

One thing to look out for when choosing a CBD product for BPD is whether it is full-spectrum or isolate. Many experts consider full-spectrum products superior. This is because they contain a variety of other cannabinoids and terpenes in addition to the CBD.

These extra ingredients may enhance the way that CBD works inside the body. They also have beneficial properties of their own. For example, CBN is a lesser-known cannabinoid with sedative effects. It could help to aid relaxation and improve sleep. Terpenes such as linalool and limonene also appear to have anti-anxiety effects.

Cannabis and borderline personality disorder have a close and complicated relationship. Many BPD patients use cannabis to self-medicate due to its calming properties. However, in some cases, it could increase symptoms of anxiety and paranoia, making the situation worse.

Cannabis and borderline personality disorder have a close and complicated relationship.

In summary, when used responsibly, cannabis and CBD may be helpful for some symptoms of BPD. However, they are not a substitute for appropriate medical care.

If you suffer from BPD and would like to manage your condition using marijuana or CBD oil, talk to a medical professional first. This is especially important if you take any other medication such as antidepressants or antipsychotics. Your physician will ensure that cannabis therapy is suitable for you and that you use it safely and beneficially.

Microdosing Cannabis for Anxiety [How it Works]