Medical marijuana is quickly making a big move into the mainstream world. The public support for the legalization of cannabis is increasing rapidly and for very good reason. People are waking up to the fact that cannabis could be the answer to many serious health issues. A recent study found that a staggering 89% of Americans are supporters of medical cannabis.

Crohn’s disease is just one of the many ailments where cannabis could help alleviate the symptoms. Both science and firsthand experiences indicate how CBD helps with Crohn’s disease. This article will cover what Crohn’s disease is, who suffers from it, and how CBD can help. We will also look at ways you can consume CBD for maximum potential therapeutic benefits.

Crohn’s disease is a type of inflammatory bowel disease (IBD). It is a condition that causes inflammation of the gut or digestive system. Although Crohn’s can affect any part of the gut, two of the most common areas are the ileum (the last part of the small intestine) and the colon. Those who have Crohn’s disease suffer from long-term swelling and irritation in the gastrointestinal tract. The result is very painful stomach cramps and diarrhea.

According to the Centers for Disease Control and Prevention, three million people in North America suffer from inflammatory bowel disease. These conditions include Crohn’s disease and ulcerative colitis. Unfortunately, western medication offers no known cure for it, although there are some treatments.

Crohn’s is considered a chronic condition which means that it is ongoing and likely to be life-long.

Crohn’s can result in abdominal pain, severe vomiting (although this is less common), diarrhea and bloody stool, extreme weight loss, and even skin and eye conditions. Anyone who has Crohn’s disease will tell you that it’s a debilitating ailment that causes extreme pain and disruption in day-to-day life.

Also, Crohn’s is considered a chronic condition which means that it is ongoing and likely to be life-long. Those who suffer from the condition may experience periods of good health, followed by times when symptoms are more active or flare up.

The symptoms will vary between individuals, and they often depend on where in the gut the disease is active. These symptoms will range from mild to severe and may change over time. Some of the most common symptoms (along with those we already mentioned above) are the following:

Who Suffers from Crohn’s Disease?

Affecting as many as 780,000 Americans, it’s important to understand who is at risk of developing this disease. Crohn’s can occur at any age, but it tends to onset in adolescents and young adults between 15 and 35. It can affect both men and women, but women are more likely to have Crohn’s disease.

While we do not fully understand the exact causes of Crohn’s, diet and stress appear to be major factors that can aggravate it. Also, the latest research suggests that genetics and a combination of hereditary and environmental factors may contribute to the development of the condition. 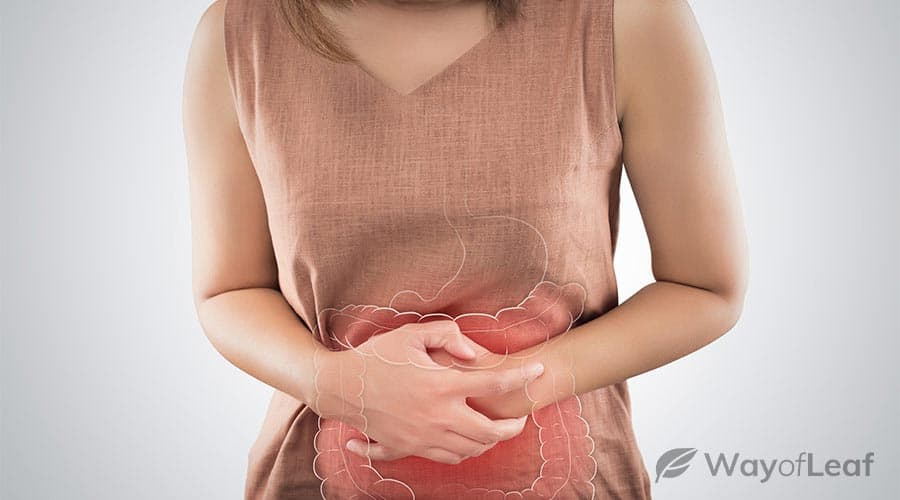 The immune system also plays a major role, but it is unclear exactly how. Researchers don’t consider Crohn’s disease an autoimmune disease (in which the body’s immune system attacks itself). Instead, the immune system may be attacking something else, like a virus, in the intestines.

At present, there is no medical cure for Crohn’s disease in mainstream medicine. However, surgery and medication can give long periods of release from symptoms. Unfortunately, pharmaceutical treatments for Crohn’s may have adverse side effects. These could include headaches, vomiting, night sweats, skin diseases, infections, and nausea.

This is where cannabis comes in, and more specifically, CBD. For those who suffer from this debilitating disease, there is hope. CBD is a natural remedy that could provide relief for many medical ailments, including Crohn’s disease.

How CBD Can Help with Crohn’s Disease

Cannabidiol (CBD) is a chemical found in cannabis. Although it comes from the same plant as THC, it doesn’t create any intoxicating effects, meaning it won’t get you high. CBD also has very mild side effects compared to almost all other medications, and it poses no risk of addiction. Thus, it is a great option for patients looking for pain relief – especially those who want to avoid opioids and their adverse effects.

Pharmaceutical medications can help with the symptoms of Crohn’s disease. Unfortunately, some people may feel that the side effects (such as those mentioned above) are too distressing. As research into cannabis intensifies, scientists are discovering how cannabinoids are potentially a less risky way to help patients with Crohn’s disease.

In an observational study, researchers in Israel monitored and assessed the effects of cannabis use on patients with IBD. One hundred and twenty-seven licensed medicinal cannabis patients took part in the study. The researchers closely monitored these participants using several evaluative measures.

These included methods of consumption and monthly consumption rate, the use of other medications, adverse effects, and the long-term effects of medicinal cannabis use. The authors also measured the exact THC and CBD concentrations these patients consumed.

After undergoing treatment for 44 months, the researchers used the Harvey-Bradshaw Index to evaluate the effects of medicinal cannabis use on patient outcomes. The Harvey-Bradshaw Index score decreased from 11 to 5 (a lower score is indicative of an improvement in the symptoms of Crohn’s Disease). Average daily bowel movements decreased from 7.0 to 3.4. Patients also reported experiencing a significant reduction in pain.

Naftali et al., who carried out the study, concluded that cannabis use could induce clinical improvement in patients with IBD. The researchers also said marijuana is associated with reduced medication use and weight gain. The researchers noted that these patients responded well to a dose of 30g per month or 21mg THC and 170mg CBD per day.

If you decide to try CBD for Crohn’s disease, it is important to remember that you should continue taking all the medications your doctor prescribes. Additionally, discuss any other treatments you are interested in trying (including CBD) with your doctor. If you do end up trying CBD, here are a few of the ways you can take it.

This is possibly the easiest and most precise way to get your daily CBD supplement. It’s a fast and simple answer. It is ideal for people who don’t particularly like the taste of cannabis, the act of vaping, or the process of ingesting raw oils. CBD pills are the #1 choice for busy schedules as they only take seconds to consume.

You can heat and inhale CBD e-liquid through an e-cigarette, vape pen, or vaporizer. CBD e-liquid is also known as vape juice and is specifically made for vaping. This is an important distinction from raw CBD oil, which you ingest by placing it under the tongue and then swallowing.

Ensure your product is free of PG, PEG, and vegetable glycerin and is not an off-market brand that may contain the very dangerous vitamin E acetate.

CBD edibles take a while to affect (usually about 30 minutes but possibly up to 2 hours). However, they present the benefit of longer-lasting effects. CBD edibles are easy to make, and many of the best ones are delicious.

They are a great choice for anyone wanting to combine CBD with their daily diet and nutritional intake. However, as the goal is to decrease inflammation, avoid edibles with inflammatory additives like sugar, high-fructose corn syrup, or vegetable oils.

If you want to give CBD for Crohn’s disease a try, there is no need to worry about smoking it.

There are many ways to consume CBD, including dabbing, which allows for intense potency. However, edibles are by far the most common and most popular product. What matters most is that if you want to give CBD for Crohn’s disease a try, there is no need to worry about smoking it. There are many CBD products available on the market, and it’s all about discovering which one works best for you.

Researchers must conduct more studies to determine the efficiency and long-term effects of this cannabis-based therapy.

However, with the growing support of medical cannabis, more funds and effort will likely go into conducting additional studies and additional clinical research.

We hope this post proves informative, educational and hopefully cleared up any uncertainties you may have had regarding CBD and Crohn’s disease.

1
4 min read
Join the discussion
TOC
Premium
Your subscription has ended
If you love cannabis and appreciate our content, join WayofLeaf Premium today and receive:
Best of all, part of your membership fee will go towards helping to legalize cannabis.
Go Wayofleaf Premium
No thanks, I can't afford it
I already have an account
×
Login in to your premium account