A survey commissioned by AbbVie Pharmaceuticals found that up to 72% of people live with a digestive problem such as abdominal pain, gas, or diarrhea. What most people don’t realize is that these seemingly innocuous symptoms could be a sign of a more severe condition.

Incredibly, the same survey found that over 50% of Americans with a digestive problem don’t discuss it with a doctor. Even when they do, they may end up with painkillers that may prove dangerous or ineffective. The truth is, cannabis could be your best weapon against digestive problems – read on to find out why.

What Are Digestive Problems?

There are several digestive disorders with symptoms of a varying degree of severity.

Some of the most common digestive disorders include conditions like irritable bowel syndrome (IBS), diverticulitis, and gastroesophageal reflux disease (GERD).

Inflammatory bowel disease (IBD) is an umbrella term for conditions that cause chronic inflammation of the digestive tract. Two types of IBD are Crohn’s disease and ulcerative colitis.

Diverticula are small, bulging pouches that can form in the lining of the digestive tract. The most common place for diverticula to develop is in the lower part of the large intestine. Diverticula are more likely to occur in people over the age of 40.

Diverticulitis is the name of the condition where these pouches (diverticula) become inflamed or infected. Common symptoms of diverticulitis include:

This is a type of inflammatory bowel disease that causes inflammation of the lining of the digestive tract. Crohn’s disease is commonly a relapsing/remitting condition; this means that people with Crohn’s disease often experience periods of remission where they are symptom-free, followed by flare-ups, where they experience the following symptoms:

Ulcerative colitis is another form of IBD which causes inflammation of the colon. It is typically a long-term condition. The Genetics Home Reference Library estimates that approximately 750,000 people in North America have the condition.

Common symptoms of ulcerative colitis include:

The differing nature of digestive problems means there are various medications on offer. Patients with IBS may receive laxatives, fiber supplements, or anti-diarrheal medications such as Imodium, or an anticholinergic medication such as Bentyl to relieve bowel spasms. Side effects of Bentyl include severe constipation and diarrhea (the same things one may be taking it to treat!)

If you have Crohn’s disease, the main goal is to reduce the inflammation that can trigger symptoms. Common anti-inflammatory drugs include corticosteroids and oral 5-aminosalicylates.

There is also a class of drugs known as immune system suppressors, which reduce inflammation by targeting the immune system. Some of these drugs carry serious side effects. For example, natalizumab has led to a number of cases of progressive multifocal leukoencephalopathy, which can cause death or disability.

These pharmaceutical medications can have severe side effects, which is why cannabis has been investigated as a possible alternative for relief from these conditions.

Cannabis has a surprising number of positive effects on your digestive system. The THC in cannabis helps stimulate the hunger hormone ghrelin, which is ideal for people with appetite problems.

Perhaps more pertinently, marijuana is capable of calming intestinal inflammation. If you have IBS or IBD, cannabis can help heal the intestine and promote weight gain. A 2012 study by Lahat, Lang, and Ben-Horin found that three months of marijuana use was enough to see weight gain in patients with IBD.

The gut is home to CB1 and CB2 receptors. Consuming marijuana activates those cannabinoid receptors.

How does it help?  According to a 2016 study by Gyires and Zadori, which was published in Current Neuropharmacology, the direct or indirect activation of CB1 and CB2 receptors exerts multiple beneficial effects on intestinal inflammation.

The researchers found that the activation of both CB receptors ameliorated intestinal inflammation in murine colitis models. More specifically, it decreased visceral hypersensitivity and abdominal pain, and also reduced colitis-associated hypermotility and diarrhea.

Many consider cannabis to be an excellent anti-nausea medication. A 2002 study by Darmani showed that THC could reduce vomiting, which is why it has become a consideration for patients undergoing chemotherapy.

If you are suffering from a digestive disorder, then this strain just might be the “holy grail” you are looking for. To give you an indication of this strain’s quality, not only did it come first in the Hybrid category at the 2011 High Times Cannabis Cup, but it also received the competition’s first-ever perfect score. 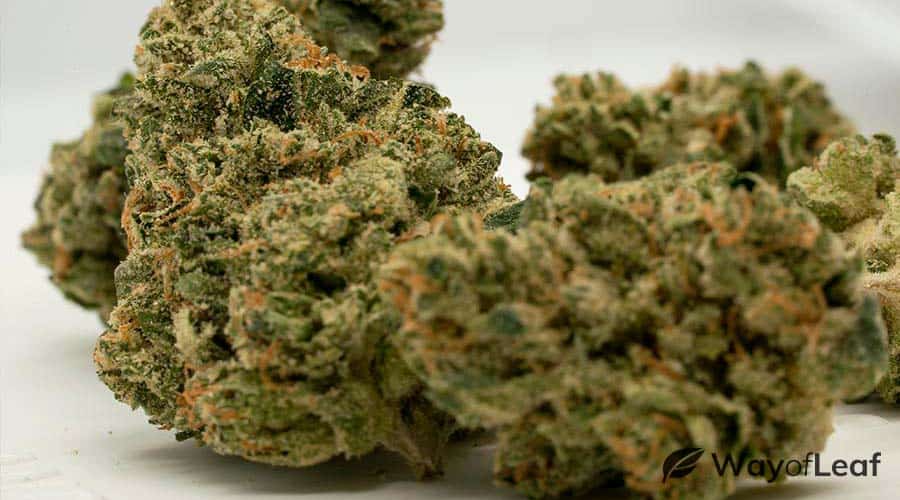 The Holy Grail Kush strain is descended from two other award-winning strains, namely OG#18 and Kosher Kush. Holy Grail Kush is a highly potent strain. Its THC level averages around the 20% mark but can be as high as 24% in some plants. Needless to say, if you are a novice cannabis smoker, then it is advisable that you try a little at first to see how you tolerate its potency.

Reportedly, this strain is excellent for relieving nausea, is good for boosting appetite, and may help with the abdominal pain associated with digestive disorders.

The Granddaddy Purple strain is another highly potent cannabis strain, which can contain THC levels as high as 23%. Novice smokers should tread lightly with this one as its effects are pretty powerful.

The Granddaddy Purple strain is best suited for evening or night-time use, as its indica effects are so strong that it usually makes consumers of this strain sleepy. An initial euphoric buzz tends to fade into a deep body melt, leaving you feeling extremely relaxed and potentially couch-locked if you overindulge. 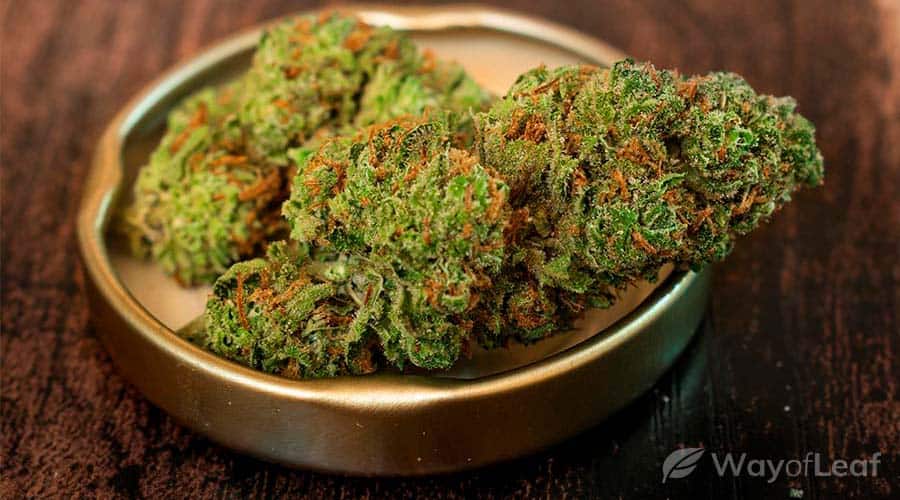 Granddaddy Purple is thought to help relieve the symptoms of a wide variety of conditions. It is commonly used for pain relief but also is a popular choice for those looking to reduce the adverse effects of stress. The Granddaddy Purple strain is reportedly also an excellent strain for enhancing appetite and is popular with people with insomnia due to its soporific effects.

Reviewers of the Granddaddy Purple strain say that it is effective at alleviating some abdominal pain commonly experienced by sufferers of digestive disorders like IBS, Crohn’s disease, ulcerative colitis, and diverticulitis. 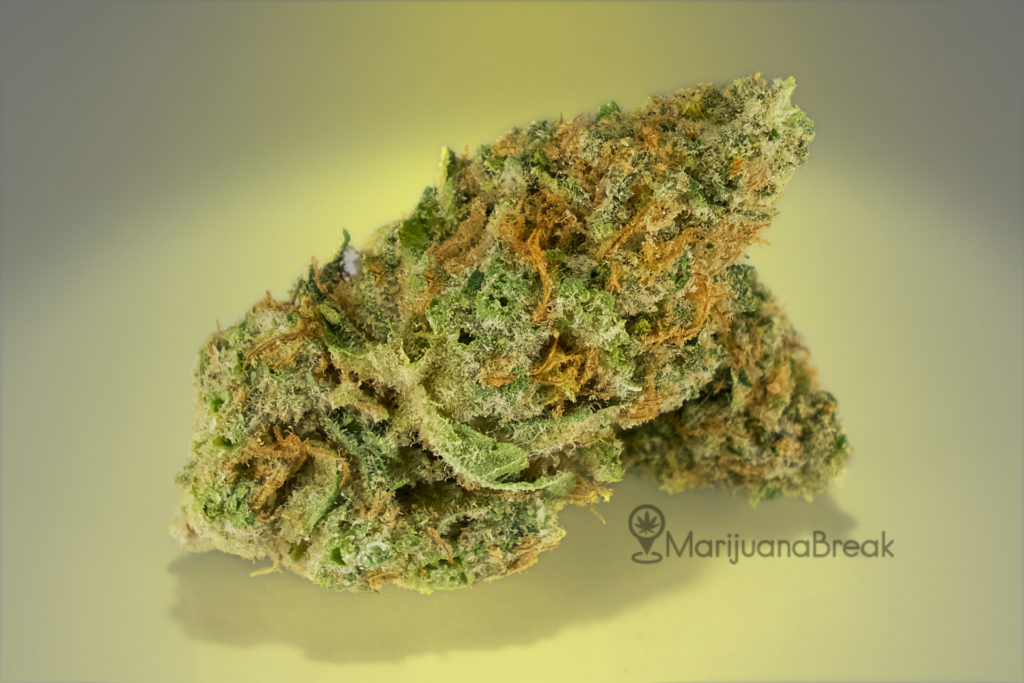 It is important to be aware of this strain’s potency before you consume it to help alleviate the symptoms of your condition. The average THC content of an OG Kush strain is usually between 20-25%, which is exceptionally high.

Naturally, with such a high level of THC, the effects of this strain are very powerful. OG Kush is renowned for producing a strong cerebral and uplifting high.

The Hash Plant strain is an indica-dominant strain (80:20) with a relatively modest THC content. The typical THC level for this strain ranges between 13% on the low end to 19% on the high end. 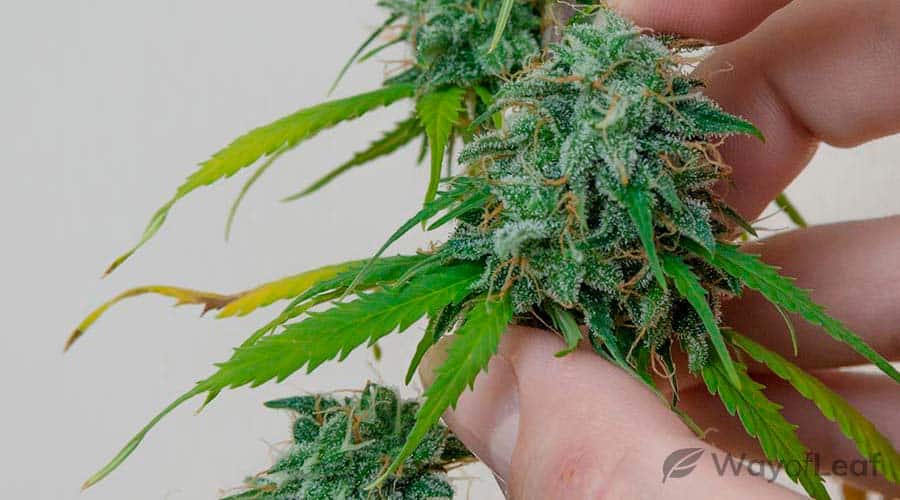 The Hash Plant strain is potentially great for relaxing the body and alleviating pain. It is also considered a useful strain for alleviating nausea and boosting appetite, too.

Users of this strain say that the deep feeling of relaxation they feel is usually followed by sleepiness later, making this strain more suitable for late evening or night-time use.

One strain which came up repeatedly as a recommendation in reviews from people with gastrointestinal pain was the Gigabud strain. This strain is an indica-dominant hybrid that has a deeply relaxing effect. Its uplifting high boosts mood, leaving consumers of this strain happy and giggly. 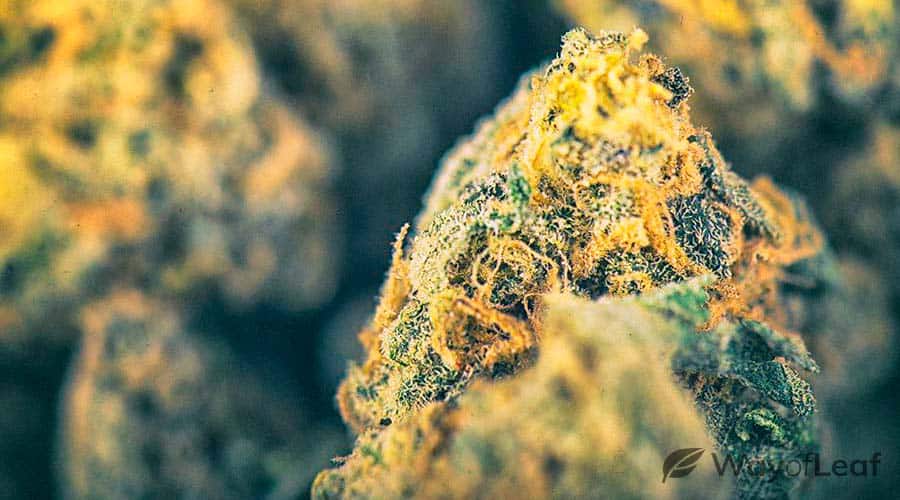 As well as reportedly being an excellent strain for pain relief, Gigabud is highly rated for increasing appetite, too. This strain also has a drowsiness-inducing effect, so you will probably start to feel tired before long. Use this one in the evening or at night-time.

If you’re one of the millions of Americans suffering from a digestive problem, then perhaps one of the five marijuana strains we’ve outlined above may help.

An increasing body of research suggests that marijuana might help fight nausea, inflammation, and pain.

It is important to note that the use of these strains is only recommended to provide temporary relief from the symptoms of digestive disorders. All of the digestive disorders mentioned in this article benefit from being managed with medication as well, in consultation with a healthcare provider.

7
6 min read
Join the discussion
TOC
Premium
Your subscription has ended
If you love cannabis and want to support our site, join WayofLeaf Premium today and unlock
Best of all, part of your membership fee will go towards supporting the fight to legalize cannabis.
Sign Up for WoL Premium
Not now
I already have an account
×
Log in to Your Premium Account