Terpenes are one of the largest groups of active compounds found in cannabis. They are of significant interest to researchers, medical marijuana patients, and recreational users alike.

Terpenes are responsible for the different aromas, flavors, and effects of various strains. Furthermore, they also possess a wealth of potential health benefits.

Experts believe that there are up to 50,000 terpenes! At present, researchers have discovered at least 200 of them in marijuana. Today, we focus on beta-caryophyllene, one of the most abundant cannabis terpenes.

Beta-caryophyllene is a terpene produced by cannabis and a range of other plants. It has a woody aroma that people describe as falling somewhere between cloves and turpentine. It has a sweet, dry taste and is used as a food additive and an ingredient in cosmetics.

The Benefits of Beta-Caryophyllene

Terpenes are a vital element of cannabis therapy. They are responsible for the distinct effects of different strains. Beta-caryophyllene has a wide and varied range of uses, primarily due to its affinity for cannabinoid receptors. Here are a few of the best-studied benefits of beta-caryophyllene:

To date, scientists have identified two main types of cannabinoid receptors: CB1 and CB2. CB1 receptors are associated with the nervous system and brain, while CB2 receptors are located throughout the body. There is a high concentration of CB2 receptors in the immune system. They play a role in modulating the inflammatory response.

Beta-caryophyllene selectively binds with CB2 receptors. Interestingly, it does this at a site known as CP55940, which is the same region where THC binds. When beta-caryophyllene interacts with CB2 receptors, it inhibits the release of chemicals called cytokines. Cytokines are a group of chemical messengers that play a crucial role in inflammation.

As well as having anti-inflammatory properties, beta-caryophyllene can also reduce swelling and edema. However, there is something curious about the way that this interaction works.

Gertsch et al. published a study in Proceedings of the National Academy of Sciences USA in July 2008. The team found that beta-caryophyllene is more effective at lower doses. However, it is unclear exactly why.

Younis and Mohamed had a study published in the journal Molecules in May 2019. The duo looked at the potential of beta-caryophyllene as a protective agent against myocardial injury. The researchers administered 100 or 200mg/kg of beta-caryophyllene daily to mice. Then, they induced myocardial infarction (MI). Ultimately, it seems as if the terpene has a cardioprotective effect on MI.

Beta-caryophyllene also appears to have some pain-relieving properties. This is probably in part due to its anti-inflammatory effects. However, it seems that there is more to the analgesic effects of beta-caryophyllene.

Aguilar-Avila et al. published a study in the Journal of Medicinal Food in May 2019. It looked at the impact of beta-caryophyllene on neuropathic pain. The test involved mice with streptozotocin-induced diabetes.  Overall, the data suggested that dietary beta-caryophyllene could reduce depressive-like behavior. The terpene also reduced the level of pain felt by the mice.

Fidyt et al. had a study published in Cancer Medicine in October 2016. It investigated the anti-cancer properties of beta-caryophyllene. The terpene appears to have antiproliferative effects, meaning that it could prevent the spread of cancerous cells. It may also induce a process called apoptosis, in which diseased cells automatically self-destruct.

Beta-caryophyllene may also be a useful adjunct to cancer treatment. It appears to enhance the effects of cancer drugs paclitaxel and doxorubicin. It may also reduce the risk of leukopenia (low white blood cell count), an issue often caused by chemotherapy.

The cannabinoid CBD is well-known for its anti-anxiety effects, and it seems that beta-caryophyllene may work similarly. One study by A. Bahi et al. for Physiology and Behavior, published in 2014, demonstrated this effectively.

The authors found that mice treated with beta-caryophyllene displayed behavior indicating reductions in anxiety and depression. The terpene also seemed to have a positive influence over compulsive behavior.

It seems that this terpene could help to reduce seizure spread and treat status epilepticus (severe epileptic fits). Furthermore, it was found to reduce oxidative stress, neurotoxicity, and associated cognitive impairments.

Another surprising benefit of beta-caryophyllene is its ability to reduce cholesterol. This was explored in research by Amani A. Harb et al. for the Journal of Clinical Biochemistry and Nutrition in May 2018.

The study found that this cannabis terpene was able to reduce harmful LDL cholesterol while increasing helpful HDL cholesterol. This finding could have implications for a variety of chronic diseases, including atherosclerosis (hardening of the arteries) and fatty liver.

The antimicrobial properties of beta-caryophyllene extracted from cannabis are less well-researched. However, one study by B. Sabulal et al. in November 2006 suggests that it may show some promise.

An extract of the plant Zingiber nimmonii, which is rich in this terpene, was found to inhibit the growth of several microbes. These microbes included Aspergillus niger, a common culprit of respiratory infections. They also included Candida albicans, the fungus responsible for yeast infections.

A study by Dahham et al., published in the journal Molecules in June 2015, also looked at this issue. It analyzed the antimicrobial, anticancer, and antioxidant properties of the terpene. Overall, the team found that beta-caryophyllene showed selective antibacterial activity against S. aureus. It is the bacterium best associated with food poisoning.

The terpene also showed better antifungal activity than kanamycin. This is significant because kanamycin is an antibiotic designed to treat a wide range of infections.

Other Benefits of Beta-Caryophyllene

As well as being anti-inflammatory, beta-caryophyllene is thought to offer protection against oxidative stress. It increases the activity of a chemical called superoxide dismutase (SOD), an antioxidant the body produces naturally.

Since inflammation and oxidative stress are at the root of many chronic diseases, beta-caryophyllene could be an effective preventative medicine. Its combination of valuable properties means that the terpene could protect against a range of severe medical conditions.

Here are some of the conditions which research says beta-caryophyllene could help to prevent:

More research is undoubtedly needed, as clinical studies are still sparse. Most research to date was conducted in laboratories or on animals such as mice. This fact means that it is still unclear exactly how this terpene affects the human body.

However, it seems likely that as we learn more about beta-caryophyllene, scientists will confirm its usefulness. Furthermore, those in the know believe the terpene is safe and non-toxic. The risk of it causing harm is low. 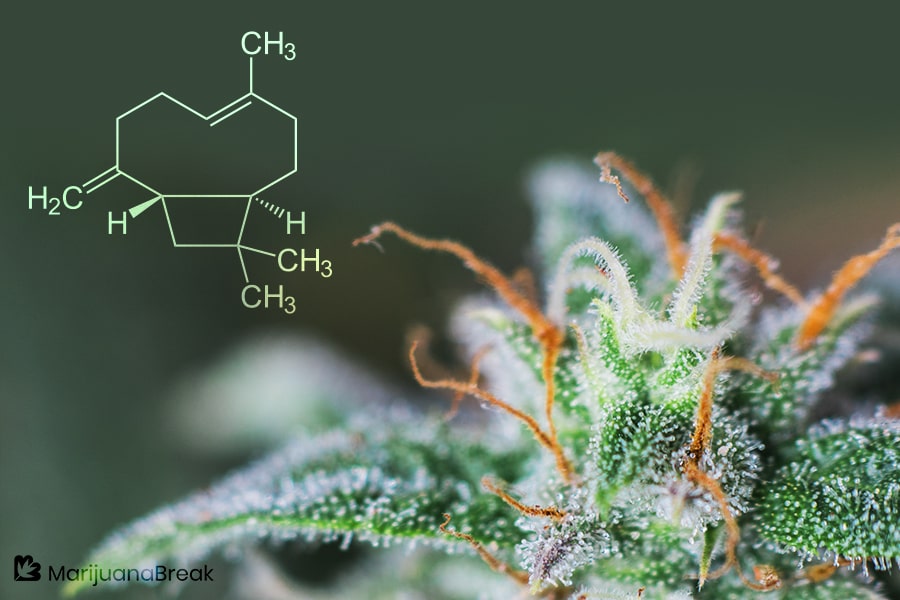 If you think you could benefit from increasing your intake of beta-caryophyllene, you may be wondering where to find it.

The good news is that this terpene is in the majority of cannabis strains. In some varieties, it makes up around a third of their essential oil. But although beta-caryophyllene is one of the most abundant cannabis terpenes, some strains do contain more than others.

Some examples of strains rich in beta-caryophyllene include:

If you are trying to relieve anxiety, you may find it beneficial to find a strain with landrace Kush genetics. These strains have a generous dose of beta-caryophyllene alongside two other prominent terpenes: trans-nerolidol and myrcene. Good examples of anxiety-reducing strains include:

Other Sources of Beta-Caryophyllene (Not Cannabis)

Beta-caryophyllene is known as a dietary cannabinoid, and a variety of culinary herbs and spices contain it.

Some good sources of this terpene include:

Therefore, it is easy to get your daily dose of beta-caryophyllene through your diet. Simply add more of these herbs and spices to your dishes to make them even more nutritious.

The Benefits of the Terpene Beta-Caryophyllene: Final Thoughts

Beta-caryophyllene is one of the primary compounds in cannabis, as well as many culinary herbs and spices. This terpene has a whole range of amazing effects on the body and could potentially benefit numerous medical conditions.

Thanks to its ability to bind with CB2 receptors in the endocannabinoid system, beta-caryophyllene has potent anti-inflammatory and antioxidant effects. It could help to relieve pain and anxiety, treat seizures, and reduce cholesterol.

With so many benefits, it seems we should all try to consume more beta-caryophyllene. Fortunately, this terpene is a significant component of many different cannabis strains, as well as several dietary sources.

However, research has shown that beta-caryophyllene is potentially effective in lower doses, at least for treating inflammation. So, whether you get your beta-caryophyllene from food, marijuana, or both, enjoy in moderation for the maximum benefit.