Anandamide is a molecule named after the Sanskrit word for ‘bliss’ or ‘divine happiness,’ Ananda. Within the body, it behaves in a very similar way to the THC in cannabis. It plays an essential role in many of our biological functions and emotions.

This fact has even led some people to nickname anandamide “the bliss molecule.”

Anandamide was initially discovered in Israel in 1992 by scientists researching THC’s effects on the brain. In the laboratory of Raphael Mechoulam, the godfather of cannabis research, it was theorized that if our brains have receptors that can be affected by THC, then our bodies must produce similar chemicals of their own. Ultimately, this theory proved to be correct.

This seminal discovery became the basis of much of what we know about the endocannabinoid system today.

When discovered, anandamide was originally called arachidonylethanolamide, a description of its molecular shape and structure. Now we refer to this molecule as anandamide or AEA for short.

Anandamide and the Endocannabinoid System

Anandamide is a molecule that is naturally produced by the human body. It is a long-chain polyunsaturated fatty acid and a crucial component of the endocannabinoid system.

The endocannabinoid system has a vital role in regulating many of the body’s biological functions and maintaining a state of homeostasis. Homeostasis can be defined as “the maintenance of a balanced internal environment by an organism.” It includes the control of body temperature, blood pressure, and water balance, among other things.

Based on the latest research…

Anandamide is a ligand, meaning that it works by binding with a specific receptor. Ligands and receptors fit together like a lock and key to elicit a particular response within the body.

The abundance of cannabinoid receptors throughout the body suggests that they play a significant role in maintaining health. As these receptors are present in many different systems, endocannabinoids like anandamide have various physiological functions.

The Role of Anandamide in the Body

When anandamide binds with CB1 and CB2 receptors, it activates them and triggers several reactions. It can also activate another type of receptor known as type 1 vanilloid receptors (VR1), where it is believed to help in the destruction of cancerous cells.

Because anandamide is a fatty acid, it is fat-soluble and can easily pass through the blood-brain barrier. Anandamide acts as a neurotransmitter in the nervous system, facilitating the transmission of signals between nerve cells. It has a role in regulating dopamine and calcium molecule transport, thus playing a crucial part in nerve conduction. 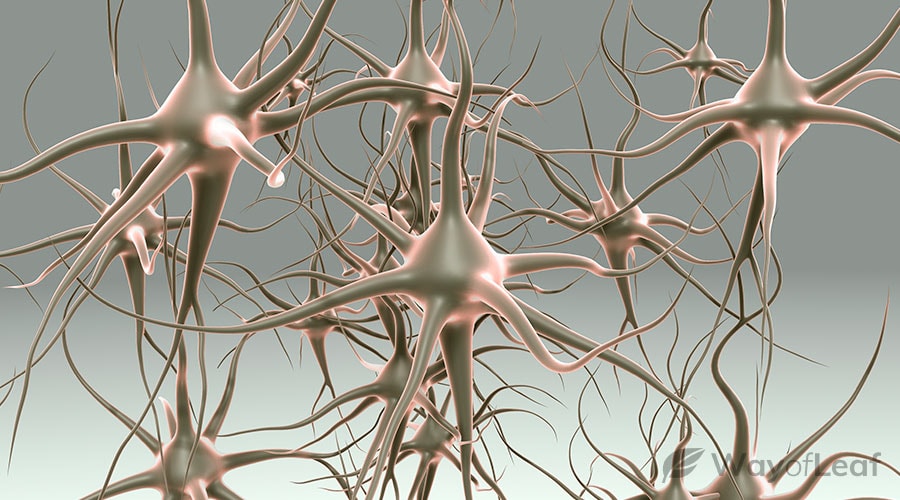 In the brain, anandamide influences motor function, the perception of pain, and memory. Small amounts of anandamide may be beneficial for improving memory, while more substantial amounts can cause forgetfulness. For this reason, scientists have proposed that using low doses of THC (which behaves in a very similar way to anandamide) could be beneficial in conditions like Alzheimer’s disease.

In the cardiovascular system, anandamide works as a vasodilator. This means that it relaxes the walls of blood vessels and allows them to expand. This response happens naturally when we get too hot, allowing our blood to move closer to the skin’s surface and be cooled. Dilation and constriction of the blood vessels are also ways the body regulates blood pressure.

Anandamide is also involved in embryo implantation in the uterus’ lining, establishing the first connections between mother and baby during pregnancy. It is closely related to another group of molecules called prostaglandins. These molecules are essential for maintaining a healthy pregnancy and also triggering uterine contractions during labor.

Prostaglandins are also involved in the inflammatory response. This has been touted as one possible explanation for anandamide’s anti-inflammatory effects and similarly with cannabis and CBD.

A Summary of Anandamide’s Role in the Body:

Anandamide and the Stress Response

Researchers have found that exposure to stressful conditions can increase the production of anandamide within the body. One 2012 study published in Neuropsychopharmacology took 71 healthy volunteers and exposed them to acute stress.

One of the methods used involved subjecting participants to a mock job interview. In another, participants performed an arithmetic task in front of two “unsmiling” assessors while viewing themselves on a television monitor.

The participants also underwent a non-stressful “control” interview in which they discussed hobbies and interests with a friendly researcher.

This study suggests that the body releases anandamide under highly stressful conditions and that it may offer protection against the effects of anxiety.

Another 2012 study on endocannabinoids and depression found that women with extreme anxiety had lower anandamide levels than their healthy counterparts. These findings suggest that while acute stress causes anandamide levels to rise, long-term anxiety appears to have the opposite effect.

Anandamide and THC: Similarities and Differences

The molecular shape of anandamide is very similar to THC’s, the intoxicating cannabinoid found in cannabis. When consumed by eating or smoking, THC molecules bind with CB1 receptors and influence the body just as anandamide can.

THC’s ability to influence the brain and nervous system are what gives it its intoxicating properties. It also gives THC its medicinal benefits: relieving pain and nausea, relaxing the muscles, and stimulating the appetite.

Another cannabinoid, called CBD, can further enhance these benefits. While CBD does not directly bind with CB1 receptors, it increases anandamide’s action in the endocannabinoid system.

Related article
Why CBD Works Better with Traces of THC

One of the critical differences between anandamide and THC is the rate at which the body breaks them down. Anandamide is a fragile molecule that’s quickly broken down in cells by an enzyme called fatty acid amide hydrolase (FAAH). The reason we’re not in a state of never-ending bliss is because the body breaks down this molecule so quickly.

Can You Boost Your Anandamide Levels?

With all of its benefits, you may be wondering if there’s anything you can do to boost your anandamide levels. The good news is that a few foods contain anandamide and may similarly affect your body.

Chocolate is packed full of beneficial compounds, including anandamide. Could this be one of the reasons why tucking into a few squares feels so good?

Consuming chocolate to boost your anandamide levels may seem like a great idea. However, please note that milk chocolate has low anandamide levels and a high fat and sugar content. Instead, opt for quality dark chocolate with a high cocoa content; or better still, try some raw cacao nibs.

Another food that contains anandamide is black truffles. These famous fungi contain not just anandamide but some other endocannabinoids too. Truffles are far too expensive to make up a regular part of most people’s diets. However, they can provide a delicious and healthy treat on special occasions.

It has also been suggested that short-term exposure to cold temperatures could increase anandamide levels. Try taking a cold shower each day, and you may be surprised by how good you feel!

What Is Anandamide? Final Thoughts

Anandamide has many vital functions throughout the body, including relieving inflammation and pain and influencing memory. Therefore, it’s no surprise that interest in anandamide has been growing steadily since its discovery just a few decades ago.

We still have a lot to learn about this versatile molecule and its potential benefits. Thankfully, with so many scientists focusing their attention on the endocannabinoid system, our understanding is growing all the time.

21
8 min read
Join The Discussion
TOC
Premium
Your subscription has ended
If you love cannabis and want to support our site, join WayofLeaf Premium today and unlock
Best of all, part of your membership fee will go towards supporting the fight to legalize cannabis.
Sign Up for WoL Premium
Not now
I already have an account
×
Log in to Your Premium Account