Written by John Killerlane, B.A., HDip
6 min read
7 comments
Read Later
All information on this website is for general informational purposes only and is not intended or implied to be a substitute for professional medical advice, diagnosis or treatment.

Blue Dream, the slightly sativa-dominant hybrid, has reigned as the number one selling marijuana strain for several years. However, its lofty position came under real threat in 2015 after the arrival of the incredibly potent Original Glue strain.

An examination of the sales data from 2015/2016 reveals that GG#4 hit the ground running. Data compiled by market research firm, BDS Analytics, shows that GG#4 outsold Blue Dream by $1m in the state of Oregon. It also briefly took the sales lead in the Fall of 2016 in Colorado and Washington. Some even thought that GG#4 would topple the mighty Blue Dream strain when it entered the Californian market. Despite the furor, Blue Dream has continued to reign supreme there, and in every other major marketplace for that matter.

In this head-to-head match, we’ll look beyond the impressive sales figures. We’ll evaluate these two weed goliaths in terms of their potency and effects, and their other standout qualities.

Let’s see which one of these two heavyweight weed strains comes out on top.

Blue Dream is a sativa-dominant (60:40) hybrid and is a cross of the Blueberry and Haze strains. With a THC content of up to 27%, Blue Dream consumers should not take its potency lightly.

This California dreamin’ strain is renowned for its well-balanced, uplifting, yet relaxing effects. Users say that its high is particularly long-lasting and that this strain is best suited to daytime use.

While Blue Dream is incredibly potent, GG #4 is one of the strongest strains on the planet. On average, Original Glue’s THC content ranges between a staggering 27-30%, therefore it is entirely unsuitable for novices.

According to GG Strains, Original Glue is indica-dominant, with a 63:37 indica to sativa ratio. While uplifting to begin with, Original Glue’s indica genetics come more to the fore as the long-lasting effects wear on. As the indica effects take over, GG#4 consumers soon realize where the “Glue” in this strain’s name comes from. A deep body melt is inevitably followed by a heavy couch-lock, leaving consumers of this strain glued to their seats.

In terms of pure potency, we have to hand it to GG#4 for its higher THC content. Blue Dream is a potent strain, but it’s effects are much more even-keeled than Original Glue. You don’t have to look much farther than Original Glue’s name to get an idea of how this strain will affect you. Even experienced weed lovers will succumb to GG# 4’s couch locking effects.

One of Blue Dream’s main health benefits is its purported ability to help alleviate chronic pain. Many say that it also provides temporary relief from mood disorders like depression. Some other conditions that Blue Dream is said to be helpful for include inflammation, migraines, menstrual cramps.

So, does GG#4 have any similar potential health benefits?

Well, Original Glue’s effects are predominantly potent and heavily sedating. For this reason, medicinal consumers suffering from a variety of painful conditions say that they find GG#4 helpful.

Some people also find Original Glue useful for relaxing and unwinding purposes. Therefore, it may be a useful strain for people experiencing ongoing chronic stress. Also, as well as sedation, GG#4 can have powerful soporific effects in its later stages. Unsurprisingly, Original Glue is a firm favorite among weed users with insomnia.

Choosing a winner here is not a straightforward task. It is largely a subjective choice based purely on anecdotal evidence. Not only that, but it also depends on the condition that the medicinal consumer is looking for temporary relief from.

It’s essential to bear in mind that both strains differ significantly in terms of their effects. Blue Dream’s effects are much more evenly balanced, and users say that they can continue to function after consuming the strain. On the other hand, GG#4 is much more likely to leave you heavily sedated and glued to your seat. This side effect tips the balance slightly in favor of the Blue Dream strain.

Side Effects of Both Strains

The most commonly reported side effects of the Blue Dream strain are dry mouth and dry eyes. Due to Blue Dream’s high THC content, novices, or people who over-consume may also experience heightened anxiety or paranoia and dizziness.

Original Glue consumers are likely to experience very similar side effects to Blue Dream users. However, some GG#4 weed users say that overconsumption of this strain has also given them a headache.

One adverse reaction that Original Glue consumers are more likely to experience is couch-lock. This involuntary affliction can be a very disconcerting experience for novices. This is one of the main reasons why GG#4 weed should be left to more seasoned cannabis consumers. 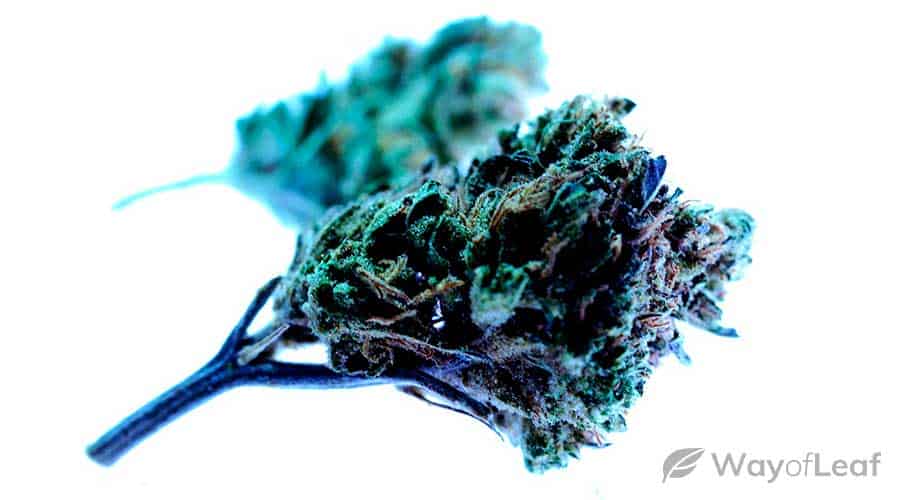 Although both strains hit you with side effects on occasion, those associated with GG4 are arguably more unpleasant.

Blue Dream, with its deliciously sweet blueberry fragrance, is a treat for the senses. Undertones of spices and herbs complement this strain’s dominant sweet and fruity berry aroma. You know you’re in for something special once you get a single whiff of the delightful blueberry scent. Hints of vanilla and mango further enhance Blue Dream weed’s fragrance.

Gorilla Glue #4, on the other hand, has a woody, pine-like scent which carries a hint of wild cherry and berries. Gorilla Glue #4’s aroma is a reliable indicator of its flavor. Though, some say it has a slight taste of chocolate and coffee.

While Gorilla Glue #4 has a relatively pleasant taste and aroma, Blue Dream wins out in this category. While GG4 can leave a slightly chemical aftertaste, Blue Dream is a lovely smoke from start to finish.

The price of Gorilla Glue #4 also varies wildly; you can purchase it online for as little as $250 an ounce. However, High Times points out that it costs $375 an ounce in New York.

With no clearly defined ‘average’ price, it is hard to give the accolade to either strain. It depends on where you live. Also, its relative value is based on how well you believe the strain meets your needs.

You can grow the Blue Dream strain indoors or outdoors because it isn’t overly sensitive to weather extremes. Growers should be wary of red spider mites as they are attracted to the sweet scent. While it thrives in a Mediterranean-type climate, this plant also does well when grown indoors.

Although you can grow Gorilla Glue #4 indoors if you wish, it flourishes in an outdoor setting as long as it is exposed to a sunny and warm climate. This plant produces a heavy coating of trichomes when exposed to colder temperatures near the end of the flowering stage.

One area where GG#4 has the edge over its rival is its slightly shorter flowering time. On average, a Blue Dream plant takes between 9-10 weeks to flower indoors. However, according to GG Strains, Original Glue can flower between 8-9 weeks.

Blue Dream shades it too in terms of growth difficulty. Experienced growers rate Blue Dream’s growth difficulty as easy, as this plant allows for some rookie mistakes. However, Original Glue growers say that its grow difficulty is moderate, which likely will make it more of a challenge.

We have a winner! The Blue Dream stands triumphant, not only on top in terms of higher sales, but also in other key areas too. But take nothing away from Original Glue, this strain ran it close in many categories. It truly is a rising star. Let us know in the comments which of the two strains you prefer.