There has been a surge in marijuana and CBD research in recent years. This has led to increased recognition of the potential benefits of these natural, plant-based remedies.

While many people still oppose the use of cannabis as a medicine, proponents suggest that it could play an essential role in managing many conditions. Furthermore, some believe that it could act as preventative medicine, helping us maintain good health and keep severe disease at bay.

Many of the benefits of cannabis are derived from its cannabinoids, flavonoids, and terpenes. These compounds have a wealth of positive actions on the human body, including antioxidant, anti-inflammatory, and neuroprotective effects.

In this article, we focus on the antioxidant properties of marijuana and why they could significantly impact one’s health.

What Is an Antioxidant?

Before we look at how cannabis acts as an antioxidant, let’s explore what an antioxidant is. People frequently use the word antioxidant when discussing the effects of specific foods or healthcare products. However, few people truly understand what this means.

Antioxidants are compounds that protect us against something known as oxidative stress. The term oxidative stress describes a situation where molecules called reactive oxygen species (ROS) build up inside the body.

Antioxidants are compounds that protect us against something known as oxidative stress.

ROS, sometimes known as free radicals, are highly reactive, oxygen-containing molecules that are produced naturally by cells. They play a crucial role in many physiological functions, especially immunity. They do this by acting as a kind of chemical signal when the body becomes infected and also help to break down diseased cells.

However, ROS also have the potential to harm healthy cells if they get out of control. They can damage proteins, lipids, and even DNA.

Under normal circumstances, the body manages its levels of ROS by producing natural antioxidants. Some of the most well-known of these include:

These molecules can interact with ROS, making them less reactive, and minimizing the harm they cause to cells. But if the body cannot produce enough antioxidants to keep these ROS under control, oxidative stress occurs.

Oxidative stress is a common problem, which is why healthcare experts recommend including additional antioxidants in our diets. Some well-known antioxidants include vitamin C, vitamin E, and the flavonoids found in fruit, vegetables, and herbs.

If a person’s body is always under oxidative stress, they are at risk of developing severe and chronic disease. Some of the conditions associated with oxidative stress include:

The risk of oxidative stress increases with age. It plays a significant role in the aging process itself. However, one can slow the whole process down by reducing one’s exposure to factors that induce oxidative stress. 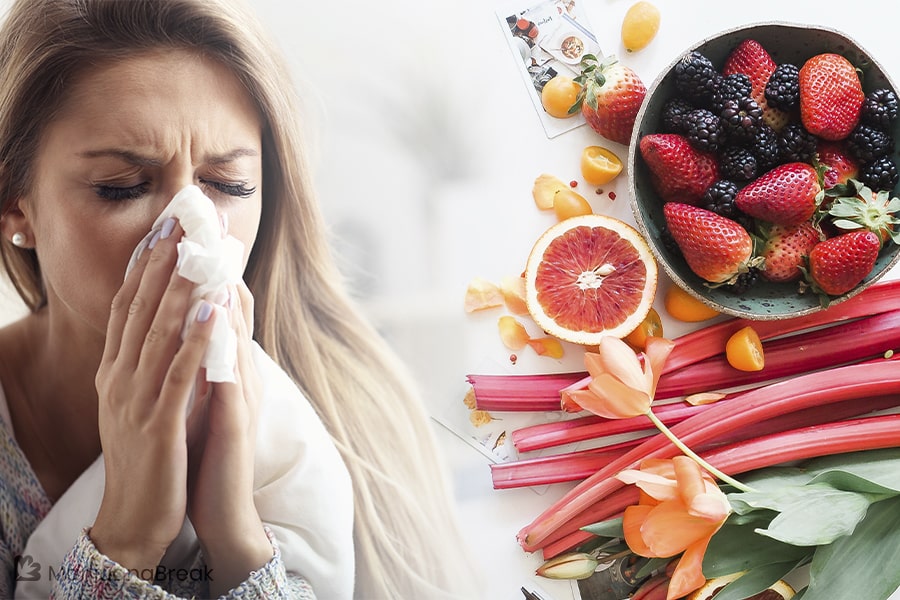 Of course, some of these factors are easier to avoid than others. This is why it is crucial to give one’s body a helping hand by consuming enough antioxidants daily.

Like the antioxidants produced by the body, antioxidants from dietary sources can react with ROS. This makes the ROS more stable and less likely to damage the body’s cells. In this way, nutritional antioxidants help to keep oxidative stress under control and reduce the risk of disease.

Most plants contain a wealth of antioxidant compounds, and cannabis is no different. The majority of its antioxidant effects come from its cannabinoids, flavonoids, and terpenes. Let’s look at each of these compounds in more detail.

To date, over 100 cannabinoids have been identified in cannabis. However, the two that have undergone the most rigorous testing are delta-9-tetrahydrocannabinol (THC) and cannabidiol (CBD).

THC is arguably the most well-known chemical in cannabis as it is responsible for its intoxicating effects. However, CBD has recently gained much attention for its potential health benefits. Among these benefits, CBD is believed to be anti-inflammatory, neuroprotectant, and a powerful antioxidant.

Research published in 2000 in the Annals of the New York Academy of Sciences found that both THC and CBD possessed potent antioxidant effects. However, CBD was found to be the more beneficial of the two. The study’s authors stated that CBD appeared to be an even more effective antioxidant than either vitamin C or vitamin E.

Flavonoids are phenolic compounds, a class of chemicals found in various plants, including fruit, vegetables, herbs, tea, and cannabis. A whopping 8000 different phenolic compounds have been identified to date, and many of these are flavonoids.

Flavonoids act as both direct and indirect antioxidants. This means that as well as stabilizing ROS, they also reduce their production by the body.

Cannabis contains as many as 20 different flavonoids, including cannflavin A and cannflavin B, which are unique to this extraordinary plant. Among other things, these two compounds are believed to have potent anti-inflammatory effects.

Terpenes are another type of chemical found in many different plants. They are aromatic compounds and play an essential role in protecting the plant from pests. They also give plants their characteristic aromas and flavors.

Cannabis contains many different terpenes. Some of the most common are myrcene, limonene, pinene, and linalool. As well as making cannabis smell and taste great, terpenes have a variety of different health benefits. One of these is their antioxidant properties.

A study published in Cannabis and Cannabinoid Research in 2018 found that many of the different terpenes in cannabis had antioxidant effects. However, none of the terpenes tested were as potent as CBD.

Using Marijuana as an Antioxidant

If one wants to maximize marijuana’s antioxidant effects, there are several steps that they can take. The first is choosing a strain that is rich in CBD. These days, most strains are bred to have a high THC content, but a select few have been bred specifically for CBD.

A few popular CBD-rich strains include:

In addition to choosing a strain with a healthy dose of CBD, a person must also pay attention to how they consume cannabis.

Smoking is known to cause oxidative stress, especially when one combines cannabis with tobacco. Therefore, this is not the most optimal way to use cannabis for its antioxidant effects. Another problem with smoking is that many of marijuana’s beneficial compounds are destroyed by intense heat.

Fortunately, there are numerous other ways to consume marijuana. These include edibles, tinctures, concentrates, and vaping. If a person chooses to vape their cannabis, they must ensure that they set their vaporizer to the right temperature. This will help to preserve those beneficial cannabinoids and terpenes.

Related article
What Is the Best Vape Temperature for Weed?

Understanding all the aspects…

Finally, consider the part of the plant that one is using. Although cannabinoids and terpenes are most concentrated in the buds of female marijuana plants, flavonoids can be found throughout the whole plant. This includes the leaves and stems of both male and female marijuana specimens.

So, if a person grows cannabis, they can maximize the benefits by using every part of the plant after harvesting. Leaves and stems may not have an intoxicating effect, but one can add them to smoothies, juices, salads, or tea for a healthy dose of antioxidants every day.

Is Marijuana an Antioxidant? Final Thoughts

Cannabis is a plant with a whole host of benefits for human health, including its antioxidant properties. It derives its benefits from a wide range of compounds, including cannabinoids, flavonoids, and terpenes, all of which have a dramatic influence over the body.

Cannabis is a plant with a whole host of benefits for human health, including its antioxidant properties.

However, to get the most benefit from cannabis therapy, one must pay attention to the strain that they choose and how they consume it. One can also maximize marijuana’s positive effects by using every part of the plant, including buds, leaves, and stems.

There is so much more to cannabis than just getting high, and the current research is only just beginning to scratch the surface. So, if a person is searching for a way to incorporate more antioxidants into their lifestyle, cannabis could be an excellent place to start.

From the weird to the wonderful, here are our favorite spooky strains