You’ve probably heard before the terms indica, sativa and hybrid. But what do these terms really mean? Most of all, how can you quickly learn to tell the difference between them (short of being a professional cannabis cultivator), while also understanding how each impacts you in a physical and/or cerebral way?

If you are thinking “sativa vs indica – what is the difference?” Then this article is for you.

Here at WayofLeaf, we understand that these concepts might seem new and complex, but by the time you’ve finished reading this article, you’ll (hopefully) know the difference between sativa and indica cannabis strains, and more importantly, how each one may affect you on a personal level.

Sativa and Indica Plants: It’s All About the Looks

Believe it or not, those who have seen a lot of marijuana in their lives can identify different cannabis strains just by the way they look. With hybrids, this can sometimes be complex, but with pure indica and sativa strains, there truly are some pretty distinct differences in appearance. Let’s take a look at a few of the most obvious ones.

If Mowgli from The Jungle Book was a marijuana connoisseur, he might describe sativa strains as being the King of the Equatorial Forest – reigning supreme over vast expanses of temperate foliage, and enlightening the various creatures who tread beneath its damp, life-bearing canopy. 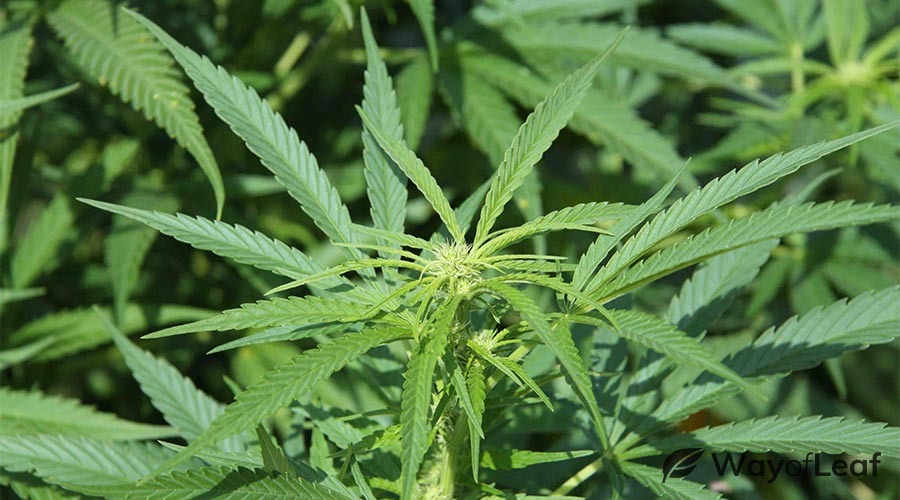 In other words, sativa marijuana is native (at least in a geographical sense) to temperate, somewhat tropical regions close to the equator. Also, its effects are generally regarded as uplifting, creative, and even energetic – hence the reason it is commonly used as relief for things like depression and stress.

DID YOU KNOW: Landrace sativa strains are generally found in temperate zones near the equator, while indicas are native to colder, more mountainous regions?

In terms of the physical plants themselves, sativa strains are known to grow giant, sometimes as tall as 12 feet high when cultivated outdoors! The leaves, buds, and colas of a sativa marijuana plant are spread far apart and tend to grow in an upward direction with the branches stretching themselves into the sky.

Additionally, very few Sativa buds grow toward the stalk of the plant, with the majority (if not all) of the useable plant material sprouting out about halfway up. This type of cannabis strain often requires a lot of room to grow, due to its sometimes enormous size and branches that need space to reach towards the heavens (another reason why sativa generally does better than indica when grown outdoors).

Lastly, a sativa’s leaves are much thinner than that of an indica strain. You’ll notice scrawny, almost pencil-like leaves that collect together at a point on the bottom, giving the leaves its classic ‘marijuana leaf’ look. In other words, you know the iconic image of a pot leaf that you see all over the world on t-shirts and smoking paraphernalia? That’s what an sativa leaf looks like. 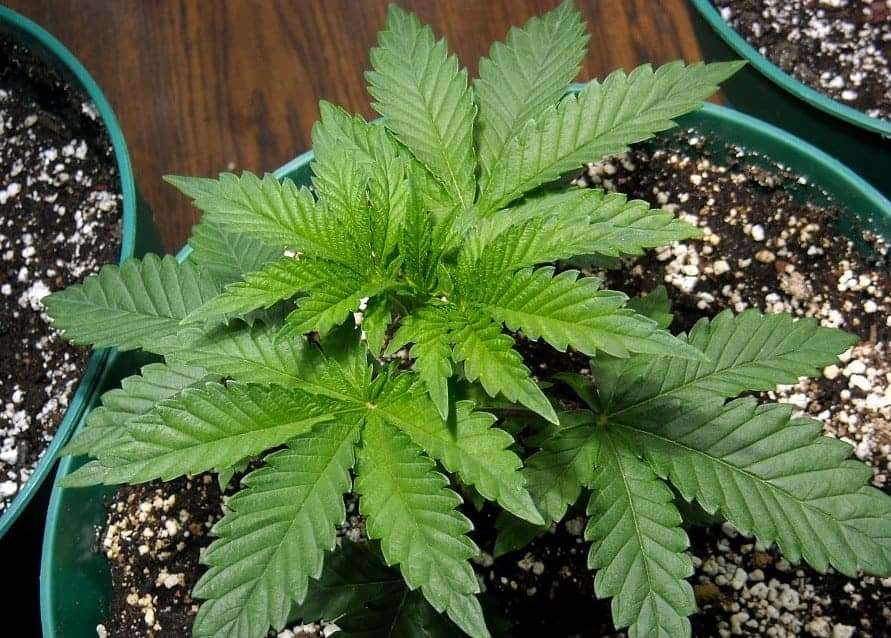 The indica cannabis strain might be described as a “hidden hero” of sorts. Much smaller than its sativa relative, indica weed typically grows about half the height of sativa – usually no more than 6 feet tall. Even though its size pales in comparison to the Equatorial King (i.e. sativa), indica cannabis is no doubt a fan favorite among pot-growing professionals as its dense, hardy nature usually make for few health problems and excellent yields.

The general plant shape of indica marijuana is actually pretty similar to that of an evergreen tree, with its branches starting from a point at the top and becoming denser as they reach the bottom. The usable plant material typically begins flourishing almost at the root of the stalk, with not much space from the bottom of the plant to the top of the soil. Additionally, indica buds tend to be thicker and heartier than sativas, producing incredibly high-yielding colas and flowers.

The easiest way to recognize an indica strain? By its fat, wide and flat leaf shape. Compared to a sativa’s leaves, the indica typically has the same pattern but it seems almost as if the leaves have swollen to double – if not triple – their usual (sativa) width. You might think of sativas as a stereotypical basketball player (tall, lanky, and thin), and Indicas as football running backs (short, stocky, and super tough).

Indica vs. Sativa Marijuana: How Do They Affect Patients Differently?

Without a doubt, there are major differences in the effects of indica vs sativa marijuana – particularly among those who use cannabis on a daily basis to treat medical symptoms.

Particularly now that cannabis has gained more widespread legalization as a medicine, more reliable and consistent reports are starting to emerge in terms of the actual therapeutic effects of each strain. It used to be generally regarded that sativas were good as mood-lifting, energizing strains while indicas were good for sleep and sedation. While this largely remains the case, we now know that the effects are much more complex than this. Let’s take a look at some of the most prominent medical effects of indica vs sativa marijuana strains.

Unless you are planning on working in the cultivation industry, this is the part you most likely care about. Cannabis sativa typically has a more uplifting high that brings energy to the consumer; this is the type of marijuana strain you’d want to smoke while out on social gatherings or events with your friends, or if you want to be productive around the house.

Sativas can be wonderfully suited for daytime use, and can often produce a creative cerebral high that will bring your mind pure energetic bliss. Generally speaking, these strains in pure form have a higher concentration of THC in comparison to their ratio of CBD.

Both sativa and indica marijuana strains have medical benefits, but each has different effects on its users. Sativa tends to be more stimulating, and is known to be more effective in treating things like:

Sativa cannabis strains also tend to have a positive uplifting effect on its patients, which typically results in a stimulating, creative, psychoactive high. Most patients prefer to consume sativa strains throughout the day.

Indica marijuana strains generally produce a classic couch-lock high that makes them a wonderful choice for relaxation, or to help with falling asleep if you suffer from insomnia or other sleep-related issues. These cannabis strains work their magic especially well during the night, or during periods of the day when you don’t need to be super active. They can offer an immense feeling of calmness and serenity, with complete body and mind-numbing levels of psychoactive intoxication

Indica in its pure form usually (but certainly not always) has a higher concentration of CBD in comparison to sativa varieties, with CBD acting to counteract the mind-altering properties of THC. This is why generally speaking, the indica high is slightly more of a “body experience” than it is a cerebral one. Of course, there are always radical exceptions to this general rule.

Those of you that have been smoking for a while probably know that indica strains work wonders during the evening time, or before bed. Indica strains are known to be sedatives and are becoming increasingly popular among medical patients for treating things like:

Some have said that indica weed is the “perfect natural sleeping pill,” and that it tends to bring on a kind of “heaviness in the body” and a “lightness in the mind,” which is both comforting and relaxing at the same time. 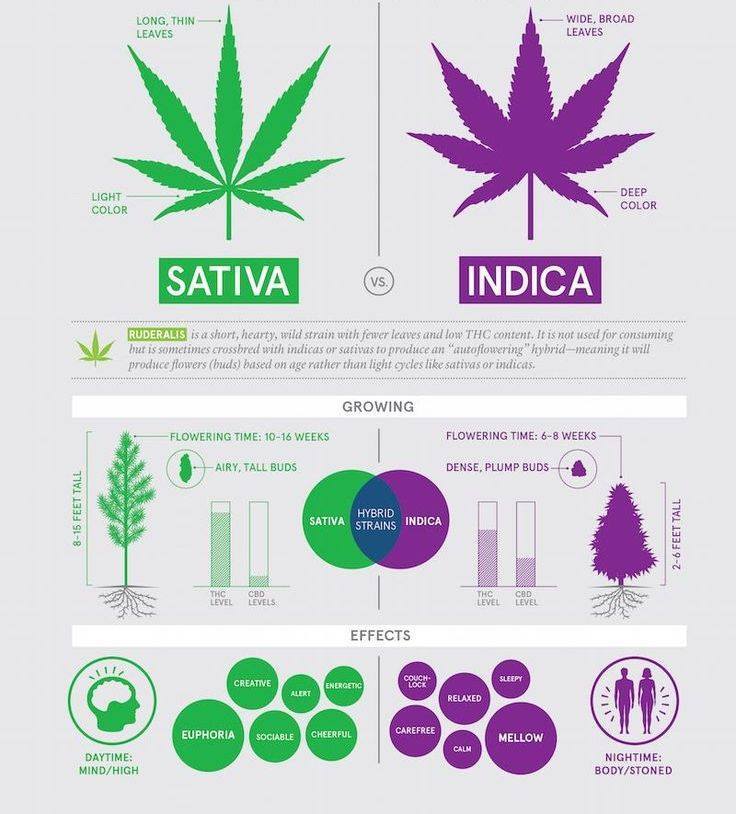 No matter what kind of high you prefer, there is likely some type of cannabis strain out there that can offer relief from the troubles that brew up in your life. Cannabis is indeed a complex plant and can produce feelings of calmness, sedation, and relaxation just as well as it can enhance energy levels and uplift the spirit.

Next time you have your moment with the cosmic green, feel awesome knowing that you can now identify indica vs. sativa marijuana if it were growing in a field and that you know how your body is going to react to each specific type.

Settle down with a calming indica if you’re trying to relax and enjoy a peaceful night in, or maybe try an uplifting sativa if you’re going out with friends and want a little shot of spunk, creativity, and energy. And of course, if you want something in-between there’s a whole world of hybrid marijuana strains (crosses between indicas and sativas) out there for your pleasure and enjoyment!

Now that you understand the difference between the different types of strains let’s find out which strains were voted the best by our readers.

How Much Weed is ‘Intent to Sell?’

From the weird to the wonderful, here are our favorite spooky strains

How to Know If You’re Allergic to Weed [Definitive Guide]

Your Guide to Cannabis Allergies and Symptoms