Terpenes are a vital element of cannabis therapy. They may enhance the effects of cannabinoids such as THC and CBD, and they have benefits of their own. Within the cannabis industry, the phenomenon of these chemicals working together in harmony is called the entourage effect.

The entourage effect means that cannabis’ active compounds could work more efficiently together than in isolation. Terpenes play a large part in this.

Plants produce terpenes as part of their defenses against pests and disease. They are responsible for the unique smells and tastes of different species. Terpenes also interact with the human body to bring about a variety of changes.

Although many plants produce terpenes, they are especially prevalent in marijuana. In this article, we look at myrcene, the most abundant of all cannabis terpenes.

Myrcene is the most common cannabis terpene. In some strains, it makes up as much as 50% of the overall terpene content. It is a monoterpene, meaning that it has a relatively simple structure. It is also a precursor to some of the more complex terpenes that we find in marijuana.

Like many terpenes, myrcene is an ingredient in numerous everyday products. It is an oily, yellow liquid with a pleasant earthy and clove-like fragrance. It tastes sweet and citrusy and has become a popular flavoring in many foods.

As well as enhancing THC’s actions in certain marijuana strains, myrcene may have some significant effects of its own. Although research into myrcene, and terpenes in general, is still ongoing, here is what we have discovered so far.

Myrcene is probably best-known for its relaxing, sedative effects. A 2002 study published in the journal Phytomedicine looked at the impact of myrcene on mice. The researchers found that high doses of myrcene made mice less likely to explore the open arms in an elevated plus-maze test. It also increased sleeping time by approximately 160%.

These results may be good news for anyone suffering from stress and insomnia. High-myrcene cannabis strains could potentially offer powerful sedation and help people get a good night’s sleep.

Researchers have also found that myrcene could help to reduce inflammation. Most people associate inflammation with painful conditions such as arthritis. However, scientists have also linked it with various other issues, including heart disease, strokes, diabetes, and cancer.

A 2015 study for the European Journal of Pharmacology looked at myrcene’s effects on inflammation in osteoarthritis. The results showed that myrcene reduced inflammation and catabolic activity in human chondrocytes (cartilage cells). The authors concluded that myrcene could slow down or even halt the progression of cartilage damage in this condition.

Anyone looking to relieve arthritis symptoms with cannabis potentially could consider, therefore, opting for a high myrcene strain. Choose a CBD-rich strain to potentially enhance its effects, as CBD has potent anti-inflammatory properties.

Myrcene may also act as an effective pain-reliever. A 1990 study published in the Journal of Pharmacy and Pharmacology looked at the analgesic effects of myrcene in mice. The authors subjected mice to a hot plate method and the acetic acid-induced writhing test. They observed that myrcene reduced nociception, the pain we associate with physical injury.

Myrcene’s effects were blocked by the drug naloxone, suggesting that this terpene influences the body’s endogenous opioids. These are chemicals which the body produces naturally in response to pain. They act in a similar way to opiates like morphine, but without the dangerous side effects.

Therefore, myrcene may be able to help to relieve some of the most common types of pain. Coupled with its sedative and anti-inflammatory effects, this could make high-myrcene strains helpful for anyone suffering from painful conditions.

Potential Risks: Does Myrcene Cause Cancer?

Although myrcene has a range of potential benefits, some researchers have also linked it with an increased risk of cancer.

A 2010 report for the National Toxicology Program found that high doses of myrcene had carcinogenic (cancer-causing) effects on rats. The study found evidence that male rats, especially, had higher rates of kidney and liver cancer after using myrcene.

Despite these worrying findings, there is currently no evidence that myrcene causes cancer in humans. However, in 2018, the Food and Drug Administration (FDA) removed it from its list of approved additives in light of the research.

There is some dispute regarding whether the government should list myrcene as a carcinogenic substance or not. Until scientists conduct further research, it is impossible to comment with certainty about how safe myrcene is.

However, it is notable that the new FDA regulations apply to synthetic myrcene, not foods that naturally contain it. It’s unknown if the same effects can be caused by naturally-occurring myrcene.

The majority of cannabis strains with a high myrcene content also have indica genetics. This is unsurprising considering that many users choose indicas for their sedating and pain-relieving effects. 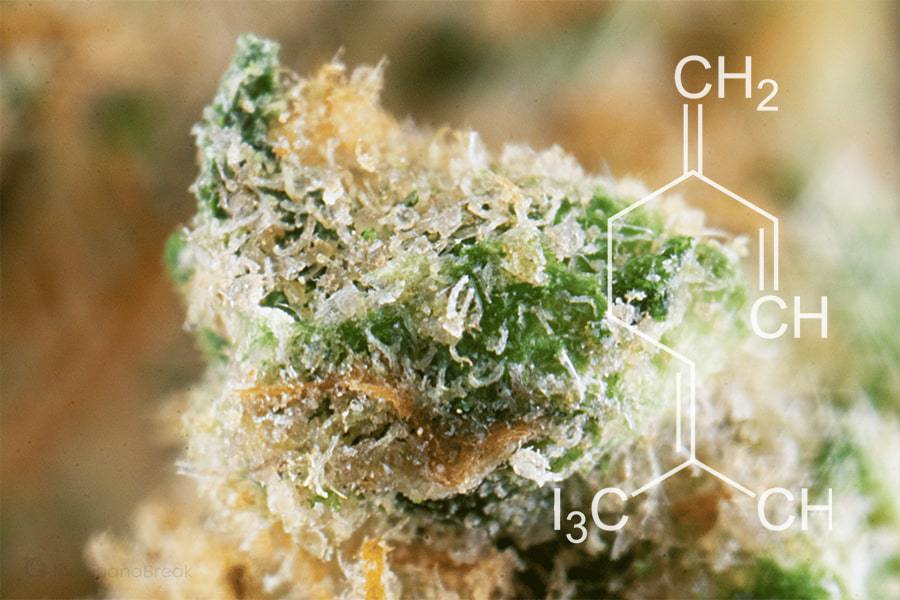 Some popular high myrcene marijuana strains include the following:

These strains are potentially useful options for patients with pain, inflammation, or insomnia. Recreational users may also enjoy these strains for their relaxing couch-lock effects. However, since they could increase sedation, they are most suitable for evening use.

Other Sources of Myrcene

As well as cannabis, myrcene is present in various herbs, spices, fruits, and vegetables. Some common sources of myrcene include:

What Is Myrcene? Final Thoughts

Myrcene is the most abundant marijuana terpene and has a range of beneficial effects on the body. Studies have shown that it has sedating, relaxing effects and may help relieve inflammation and pain. This means that strains with high myrcene contents could help patients suffering from stress, insomnia, and painful conditions.

Choose an indica or a hybrid strain with strong indica genetics when seeking high myrcene content.

However, it is best to reserve high-myrcene cannabis for later in the day. Otherwise, it may cause extreme sedation to the point where couch-lock occurs.

Some scientists have linked myrcene with cancer in rats. However, there is no evidence that it has these effects in humans. We recommend that concerned individuals read the research and decide whether the benefits outweigh the risks.

What Is Bubble Hash? And How Do You Use It?