Marijuana is the world’s most used illicit drug. It is only fully legal in Uruguay and Canada. In the United States, over two-thirds of states have a medical marijuana program. One-third of states now permit adult-use cannabis. However, according to the Controlled Substances Act (CSA) of 1970, cannabis is a Schedule I substance. This means it is illegal to grow, sell, purchase, or possess.

Therefore, the federal government could charge someone for a cannabis crime even in a state where it is legal. At present, though, the feds have not interfered in any state’s marijuana program.

The government allows each state to make its own laws, which can get extremely confusing! This article looks at an offense called ‘intent to sell,’ focusing specifically on cannabis.

What Is Possession of Marijuana with Intent to Sell?

Broadly speaking, this is a charge that’s applicable under federal or state law. Federally, it relates to the possession of a controlled substance (marijuana, for instance) with the intention of selling it. You’re committing two crimes: Possession of cannabis, followed by its sale.

A prosecutor must prove that the person in possession of cannabis was planning to sell the drug. This is a difficult task because ‘intent to sell’ typically means you’re not caught in the act. The prosecutor can’t get inside the mind of the accused. Therefore, they must prove the charge by looking at the circumstances.

In general, ‘intent to sell’ relates to an amount too large for personal use only. Other forms of evidence might include finding packaging materials, customer communications, or significant amounts of cash on the accused person.

Intent to sell can’t happen unless the possession of the drug occurs simultaneously with the intent to make the sale.

Then there is the small matter of timing. Intent to sell can’t happen unless the possession of the drug occurs simultaneously with the intent to make the sale. For instance, if the accused plans to sell 3,000 kilograms of cannabis but haven’t received the drugs, a prosecution team can’t accuse the individual of intent to sell. After all, they don’t even have possession of cannabis!

Is This Just a Federal Crime?

No. States also have the option of charging someone with the intent to sell cannabis. This can happen even in states where adult-use marijuana is permitted. You are not allowed to sell marijuana unless you have the requisite license. There are also limits on how much cannabis you can possess.

It is fairly clear cut in states where there isn’t even an MMJ program. Take the state of Wisconsin, for example. Cannabis is illegal in all forms in Wisconsin at present. The possession of any amount of the substance is a misdemeanor, which carries a potential prison term of up to six months. The sale of any amount is classified as a felony and could result in 3.5 years in jail.

You are clearly in a lot of trouble if convicted of intent to sell marijuana. However, Wisconsin law makes it relatively difficult for prosecutors to prove the offense has occurred. The state has to provide evidence for the possession of:

It is a similar story in every state. However, is there an ‘amount’ of marijuana that takes you into ‘intent to sell’ territory?

How Much Marijuana Is Deemed ‘Intent to Sell’?

Unfortunately, there is no clear guidance available. We know that according to federal law, the trafficking of cannabis has clear thresholds. The most serious charge is for individuals looking to sell at least 1,000 kilograms. Selling over 100 kilos but less than 1,000 is categorized as a form of trafficking that carries a less severe penalty. 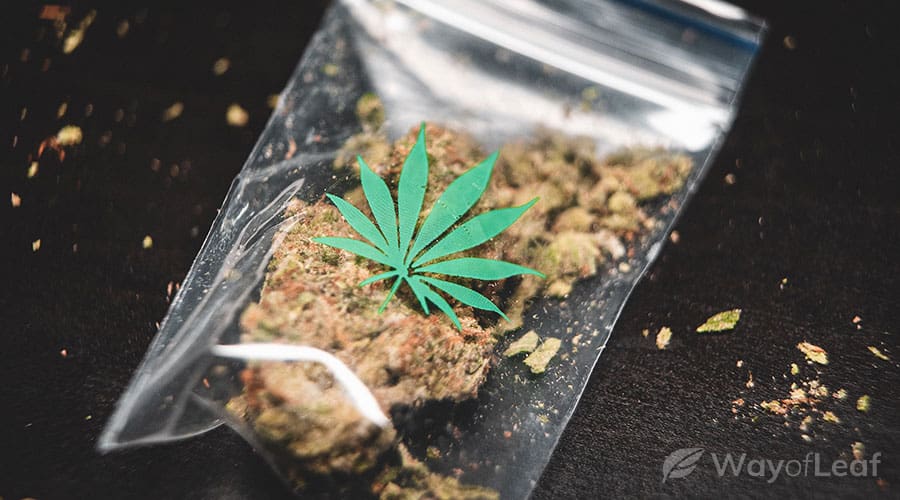 There are also clear limits on what a felony drug possession charge is in different states. However, thresholds relating to ‘intent to sell’ don’t seem to exist.

In one case in Orlando, a man was caught with 18 individual Ziploc bags of cannabis. Surely, this was evidence of intent to sell? However, he also had less than $60 in cash, and the total weight of the marijuana was below 20 grams.

The defendant was charged with a felony because the arresting officer believed that the man was selling drugs. The thing is, the police officer never saw the defendant actually sell the cannabis. The defendant also claimed that the marijuana was for personal use and would only last him a day and a half!

Ultimately, the court decided that there wasn’t enough cannabis or other evidence to warrant a charge of intent to sell. The charge was downgraded to simple possession, a misdemeanor. Had the defendant carried more cash, the situation could have been very different. Then again, in most states where marijuana is recreationally legal, adults can buy and possess up to an ounce.

It seems as if there isn’t an amount of marijuana that warrants an intent to sell charge. Rather, it is a combination of factors. You will likely be in big trouble if you have several ounces, hundreds of dollars of cash, and the cannabis divided into packages.

What Are the Penalties for Intent to Sell Cannabis?

Once again, there are different federal and state penalties. Here is a quick overview of the federal penalties for selling marijuana. In each instance, you’re charged with a felony:

Each of these penalties is doubled if you sell to a minor or within 1,000 feet of a school or other specific areas.

The penalties for intent to sell marijuana vary according to the state. You can transfer up to an ounce of cannabis to another adult in Arizona without money exchanging hands. However, the sale of any amount is a felony with the potential for up to three years in prison. In California, the intent to distribute any amount is a misdemeanor with a possible prison term of six months.

In general, intent to sell cannabis is a serious charge with prison time if you’re convicted. Therefore, you need to look into possible defenses. Here are a few that attorneys often recommend.

Lack of Control or Possession of Cannabis

The prosecutor has to prove that you had control over the marijuana. For instance, let’s say a police officer finds cannabis in a location where you were present. This doesn’t necessarily mean you had ‘control’ over the area. A prime example is if you’re a passenger in a car and the police find marijuana in it. You can’t get charged with intent to sell unless the officer can prove you were in control of the drugs.

Related article
Here Are the Top Cannabis Lawyers in All 50 U.S. States

Find a specialist in cannabis …

The Fourth Amendment gives you the freedom to avoid unreasonable searches and seizures by government officials and law enforcement. Therefore, these officers must comply with certain procedures when searching someone, making a traffic stop or when they arrest a person. A failure to do so means any evidence they find is potentially deemed inadmissible in court.

No Evidence of Intent to Sell

It isn’t easy to prove that an individual had the intent to sell a controlled substance. Your lawyer can argue that you had the substance for personal use only. Unless the prosecution can prove you intended to sell the drugs, your charges will be reduced. In some cases, you could be set free entirely.

No Knowledge of Awareness of the Cannabis

The prosecution has to prove you were aware of the drug’s existence and were also aware that it was illegal. You probably won’t get convicted if your attorney can prove you didn’t have any knowledge that the drug was in your possession.

Final Thoughts on How Much Cannabis Constitutes Intent to Sell

The simple answer is that there is no specific amount either federally or in state law. The prosecution must prove that you had possession of marijuana intending to sell it. This can mean evidence such as large cash sums, scales, and cannabis divided into packages. If a prosecutor can prove it, you could be convicted on an intent to sell charge for a few grams.

In many locations, the sale of any amount means a felony charge and several years in prison.

The illegal sale of cannabis is a serious crime federally and in every state. In many locations, the sale of any amount means a felony charge and several years in prison. Therefore, don’t try to sell cannabis unless you have a license to do so!