There are well over 100 identified compounds in the cannabis plant. Cannabidiol (CBD) and tetrahydrocannabinol (THC) are the two most abundant and best-known, but each has different properties and can affect the body in very different ways.

The most obvious difference is that THC provides users with a ‘high,’ whereas CBD does not. It is possible to get CBD products made from the cannabis plant. However, legal issues mean that sellers tend to extract their CBD from the industrial hemp plant.

Hemp & Cannabis: What’s the Difference & What Can They Do for the Body?

Of course, there are clear differences between the two plants – including legal differences. While hemp (which is legal in the U.S.) has a maximum THC content of 0.3%, the level of THC is significantly greater in marijuana. Again, however, both of these plants fall under the broader umbrella term of ‘cannabis.’

Both hemp and cannabis (marijuana) affect the human body and mind through the endocannabinoid system, or ECS. The ECS is a series of receptors and neurotransmitters that work together to influence an enormous number of vital functions, including pain, appetite, sleep, and much more.

The cannabis plant is also filled with useful cannabinoids, terpenoids, and flavonoids that benefit the human body. THC and CBD are the most abundant of these compounds and the subject of the greatest amount of research. But what are they, how do they work, and why are they different from each other?

Until recently, most people associated cannabis with getting high, which meant that the focus was solely on THC. In recent times, however, scientists have discovered CBD and other cannabinoids. This has opened a new door in terms of researching the medicinal benefits of cannabis.

Both THC and CBD are cannabinoids in the cannabis plant. They both exist within the crystalline resinous trichomes that cover a mature cannabis flower. However, different strains can produce very different amounts of each compound.

What Is THC & How Does It Work?

THC is the first true star of the cannabis plant; it is the reason people experience an intoxicating high. There is no doubt that a high THC strain will alter your mind. However, the compound also has an array of potent medicinal benefits.

When THC penetrates the brain, it stimulates cells to release dopamine. THC also activates cannabinoid receptors, which impact the brain in many ways. Some high-THC strains give users a burst of energy and creativity. Other strains provide a mellow feeling as the high takes over the body. In particularly strong strains, effects can hit within 10 minutes. Here are some of the typical effects of THC:

There is evidence that THC could prove more beneficial than CBD in alleviating symptoms of certain medical conditions. In a 2019 study (see link in the previous sentence), nearly 3,300 people completed roughly 20,000 self-administrated medical marijuana sessions using an app from Releaf. Users reported feeling significantly greater symptom improvements after using high-THC products. On the contrary, high-CBD products were not associated with noticeable positive changes in symptoms.

What Is CBD & How Does It Work?

The biggest draw to CBD is that it does not cause intoxicating effects. For this reason, the compound is typically used for medicinal/therapeutic purposes only. Scientists are still elucidating exactly how CBD works in the body. However, research shows that there is a definite interaction with the ECS.

In the ECS, CB1 and CB2 are the two main cannabinoid receptors. CB1 receptors are found mainly in the brain. They play a significant role in memory, sleep, mood, appetite, pain sensation, and more.

CB2 receptors, on the other hand, are found in the immune system and various organ and tissue systems throughout the body. These receptors are responsible for the anti-inflammatory effects of CBD. While THC directly affects both receptors, CBD acts indirectly on them and boosts the level of endocannabinoids in the body. Also, CBD appears to prevent the natural breakdown of endocannabinoids. Here are some of CBD’s most common effects:

There is research that suggests CBD could help with some symptoms of Parkinson’s disease. Future studies may reveal more regarding CBD and its possible applications.

THC: Why the High?

When it comes to the euphoric effects of cannabis, we must focus on the CB1 receptors concentrated in the nervous system and brain. THC binds well with CB1, while CBD does not. In simple terms, the THC molecule is ideally shaped to make the connection; like a key in a lock. Once this connection occurs, THC stimulates the CB1 receptors.

THC also partially mimics anandamide, aka the ‘bliss molecule,’ which is a naturally occurring endocannabinoid. THC’s structural resemblance to anandamide means that whenever it activates CB1 receptors, it helps to produce the blissful feelings associated with cannabis. 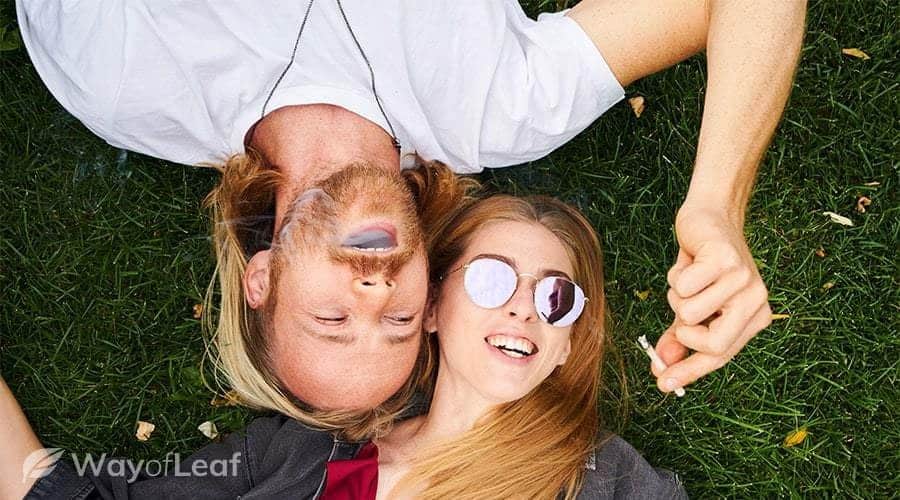 CBD, on the other hand,  is an antagonist of CB1 receptors, meaning it does not work in a lock-and-key combination. Rather, it suppresses the CB1-activating qualities of THC, meaning it reduces the intoxicating effects of THC.

For example, if you have a cannabis strain with 22% THC content, the strain will likely produce an intense high. However, if it also has 8% CBD, these effects will be reduced, and paranoia feelings should also be minimized.

Recent research has found that when a cannabis plant’s cannabinoids, flavonoids, and terpenoids are combined, they work far better for medicinal purposes than any individual compound. This phenomenon is known as the entourage effect. Together, cannabis’ compounds can create positive effects that are potentially impossible for any compound to do alone.

A perfect example is the use of cannabis for chronic pain. While THC alone could help alleviate pain, CBD can reduce symptoms of anxiety that may come with having chronic conditions. CBD for sleep is also becoming quite popular. A combination of THC, CBD, and terpenes is potentially effective against depression, arthritis, anxiety disorders, and migraines.

THC and CBD in combination could also help with conditions such as multiple sclerosis. This was outlined in a review of studies published in BMC Neurology back in 2009. The researchers also noted that both cannabinoids were generally well tolerated by patients.

Any CBD product that comes from the cannabis (marijuana) plant is subject to Schedule I drug classification. However, the 2018 Farm Bill legalized the cultivation of industrial hemp with a maximum THC content of 0.3%. This is why hemp-derived CBD products are now legally sold in all 50 U.S. states.

Final Thoughts on CBD Vs. THC

Due in large part to the passage of the Farm Bill, CBD has become immensely popular. Individuals can now purchase a variety of CBD-infused products, including oils and capsules. Initial studies indicate that CBD may aid in mitigating many conditions.

However, although CBD is potentially effective in decreasing a number of symptoms, THC may also be beneficial. There is research that indicates THC is more effective than CBD in the relief of certain symptoms.

As the number of studies about CBD and THC increases, researchers can learn to understand how each compound could benefit humans.

Related article
What Is the “Entourage Effect”? [Thoroughly Explained]

Why these cannabis nutrients are essential to health

2
9 min read
Join the discussion
TOC
Premium
Your subscription has ended
If you love cannabis and appreciate our content, join WayofLeaf Premium today and receive:
Best of all, part of your membership fee will go towards helping to legalize cannabis.
Go Wayofleaf Premium
No thanks, I can't afford it
I already have an account
×
Login in to your premium account