Written by Natalie Saunders, B.A., LicAc
6 min read
0 comments
Read Later
This article may contain links to some of our affiliate partners. These are brands we trust and brands we feel represent the highest quality standards. When clicking links, we may earn commissions to help support our site. Learn more by reading our full disclaimer.

Pinene is a terpene – a type of chemical compound that many different plants produce. The primary role of terpenes is to protect against pests and diseases. However, they also have a range of potential benefits for human health.

One plant that is especially rich in terpenes is cannabis. These compounds contribute to the various aromas, flavors, and effects of different strains.

Industry experts believe that terpenes work synergistically with cannabinoids such as THC and CBD in what is known as the ‘entourage effect.’ The entourage effect could help boost these cannabinoids’ activity while reducing the risk of adverse effects. For this reason, many people consider terpenes a vital component of cannabis therapy.

In this article, we put the spotlight on pinene to uncover its possible benefits. We also discuss where you can find this terpene, both in high pinene cannabis strains and elsewhere.

Pinene is a clear, colorless liquid with a piney, turpentine-like aroma and a dry, woody, or resinous taste. It is no surprise that one of the primary sources of pinene is pine trees and other conifers. However, it is also a common constituent of many cannabis strains. 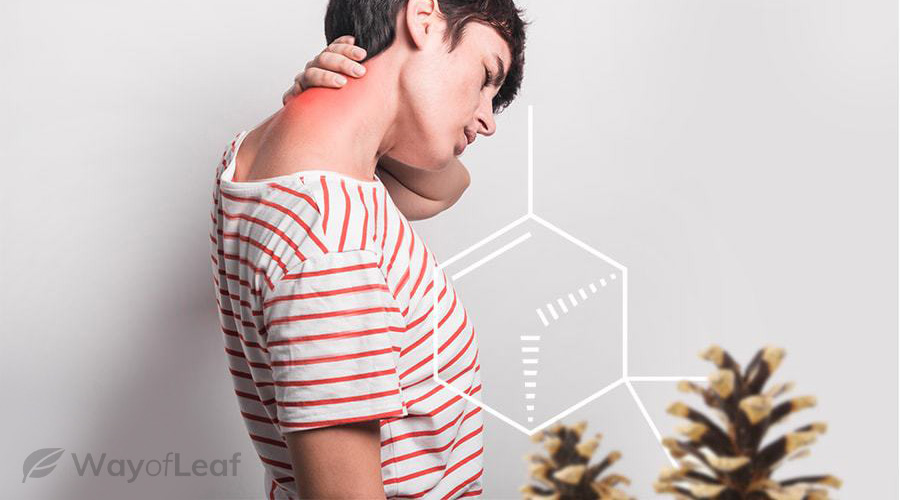 Pinene is a monoterpene, one of the simplest types of terpene. It has the molecular formula C₁₀H₁₆ and comes in the form of alpha-pinene and beta-pinene.

α-pinene vs. β-pinene – What’s the Difference?

Both structural isomers have the same chemical formula and exist in the form of positive and negative enantiomers. This means there are two forms of each molecule, which are mirror images of one another.

These molecules exist in varying concentrations in different types of plants. For example, the negative enantiomer is more common in European pines. Its positive counterpart, on the other hand, is more common in North American species.

There are two forms of pinene, alpha and beta, which are mirror images of one another.

As the name implies, α-pinene is the alpha structural isomer of pinene. It is known for the alkene inside the six-membered ring, with β-pinene known for its placement outside the ring.

α-pinene exists as a colorless liquid that’s slightly water-soluble. It can mix with ethanol, acetone, and acetic acid and is a flammable liquid.

β-pinene is the beta structural isomer of pinene. Unlike α-pinene, β-pinene is not water-soluble at all. It is the issue of solubility in water that constitutes the major difference between the two compounds.

However, as far as α-pinene effects go, they are the same as β-pinene effects. We will explore this in more detail a little later on.

Now, let’s look at some of the benefits of this terpene and why you might consider a high pinene marijuana strain.

Like most terpenes, pinene has a range of potential benefits. Here is some of the current research on pinene and its effects on human health.

Like many other cannabis compounds, pinene may have powerful anti-inflammatory properties.

A 2014 study for the Journal of Natural Products confirmed these properties. It looked at the anti-inflammatory effects of pinene on human chondrocytes (cells that produce cartilage).

The authors found that pinene inhibited pro-inflammatory compounds such as interleukin-1β.

Furthermore, the positive enantiomer, alpha-pinene was most effective. They suggest that this terpene could, therefore, be useful in the treatment of inflammatory conditions like osteoarthritis.

Pinene also appears to have potent antibacterial and antifungal effects.

A 2012 study for Molecules investigated the effects of this terpene on various microbial cultures. The authors found that pinene was highly toxic to Candida albicans, the fungus responsible for causing yeast infections.

It also had bactericidal effects on methicillin-resistant Staphylococcus aureus (MRSA). Furthermore, this terpene appeared to enhance the impact of the antibiotic ciprofloxacin on these potentially dangerous bacteria.

Interestingly, once again, it was the positive enantiomer of the terpene that was most effective.

Pinene may also have potent antioxidant effects. Therefore, it could play a neuroprotective role in conditions such as Parkinson’s and Alzheimer’s disease.

A 2016 study for Zeitschrift für Naturforschung found that the terpene had a two-fold antioxidant effect. Firstly, it inhibited the production of harmful molecules called reactive oxygen species (ROS).

Secondly, it enhanced the expression of several natural antioxidant chemicals. These included:

The authors of the study suggest that pinene could benefit the nervous system’s oxidant/antioxidant balance. This, in turn, could help to slow or prevent the development of neurological diseases.

In his 2011 paper, Taming THC, neurologist and cannabis expert Dr. Ethan Russo discusses several further benefits of pinene. These include its potential as a broad-spectrum antibiotic and a bronchodilator when administered in low doses.

However, perhaps one of the most exciting pinene benefits he covers is its use as a natural memory aid.

Pinene appears to inhibit the action of an enzyme called acetylcholinesterase. The function of this enzyme is to break down the neurotransmitter acetylcholine.

Acetylcholine has many different actions within the body. It increases alertness and attention and plays a role in learning and memory.

By slowing the breakdown of acetylcholine, pinene could help counteract some of the adverse side effects of THC, specifically, short-term memory impairment.

A study published in Biomolecules in 2019 looked at the therapeutic potential of alpha and beta-pinene. The researchers found that these monoterpenes could have the following prominent effects:

Furthermore, a review of studies published in Frontiers in Psychiatry in 2021 looked into the potential use of pinene and linalool as terpene-based medicines for brain health. The researchers stated that both terpenes warrant further investigation as novel medicines for illnesses such as inflammatory and neuropathic pain, anxiety, insomnia, depression, and cognitive impairment.

If you wish to maximize this terpene’s benefits, you will need to find a high pinene cannabis strain. The good news is that the compound has a high bioavailability rate of around 60% when inhaled.

This makes it easy to take advantage of the terpene’s many positive effects. Most users also enjoy high pinene strains’ unique, crisp, and refreshing flavors. 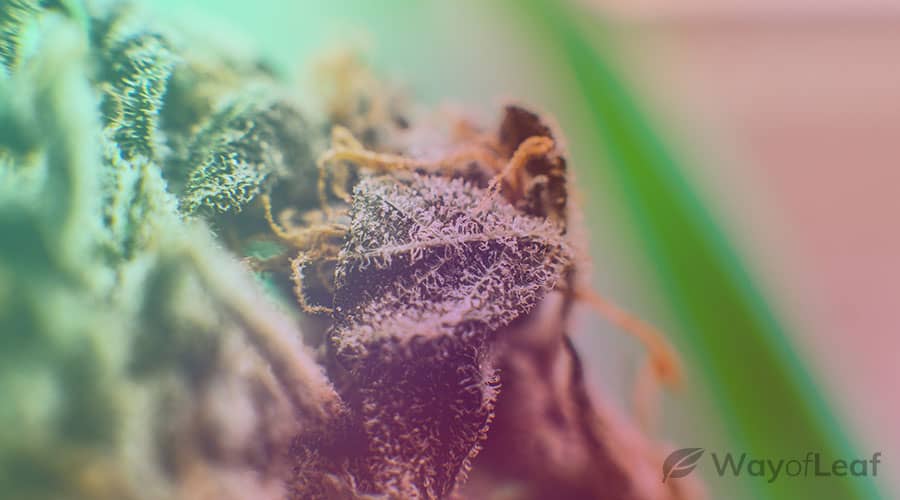 Some of the best high pinene marijuana strains on the market include:

If you are lucky enough to live in a legal state, these strains are widely available in licensed dispensaries. However, if you live in a place where cannabis is not yet legal, you need to find an alternative source of pinene.

Full-spectrum and broad-spectrum CBD products are a potential solution. Oils and concentrates may contain dozens of compounds, including various cannabinoids and terpenes. Check out the lab sheets of brands such as Green Roads and CBDistillery to determine how much alpha-pinene and beta-pinene are in each product.

If you’re serious about increasing your pinene intake, however, you may want to go further. Floraplex is an example of a company that specializes in terpene products. It sells α-pinene and β-pinene in bottles ranging from an ounce to a full gallon!

Other Sources of Pinene (Not Cannabis)

In addition to cannabis, you can find pinene in a range of other plants and their essential oils. These include lime peel oil, eucalyptus oil, and tea tree oil.

You can also find pinene in many common kitchen herbs and spices, such as the following:

However, one particularly enjoyable way to benefit from pinene is the practice of ‘forest bathing.’ This activity is popular in Japan, where it is known as shinrin-yoku. It is also one of the core elements of a German complementary medicine system known as ‘Kneipp therapy.’

The air in forests is especially rich in terpenes such as pinene. Therefore, walking and exercising in these areas is potentially therapeutic. Coupled with the awe of being immersed in nature, it is unsurprising that this activity is fantastic for your health.

Research suggests that forest bathing has many potential benefits. These include improving immune function and cardiovascular health, aiding mental relaxation, and relieving respiratory disorders. It may also prove useful for people with mood disorders such as stress, anxiety, and depression.

As well as pinene, forest air contains numerous other beneficial terpenes. These include limonene, camphor, menthol, and myrcene, to name just a few.

Does Pinene Cause Side Effects?

The Frontiers in Pharmacology review of studies outlined that pinene isomers are approved for safe use in human food and cosmetics worldwide. Overall, the evidence to date suggests that both α-pinene and β-pinene are non-mutagenic and non-toxic.

The evidence to date suggests that both α-pinene and β-pinene are non-mutagenic and non-toxic.

However, the study did mention research that showed upper airway irritation after the inhalation of pinene. This data included a clinical study that looked into workplace exposure to high pinene levels. However, the irritation was reversed within six hours, and additional acute exposures didn’t result in deterioration.

Therefore, the researchers were satisfied that pinene terpene effects were NOT harmful after all.

Final Thoughts on the Benefits of Pinene

Terpenes such as pinene are an essential part of cannabis therapy. They can enhance the effects of cannabinoids and reduce the likelihood of experiencing adverse effects. This natural synergy is known as the ‘entourage effect’ and is of great interest to cannabis researchers and patients alike.

Pinene has various potential benefits, including anti-inflammatory, antimicrobial, antioxidant, and neuroprotective effects. It may also help counteract the short-term memory issues that many people experience when using high THC doses.

Another benefit of high pinene marijuana strains is that they taste great. These strains have a fresh, herbal flavor akin to walking in a lush evergreen forest. So, next time you visit the dispensary, why not give one of these delicious and distinctive strains a try?