Terpenes are aromatic compounds in marijuana. It seems they are finally stepping out of the shadow of cannabinoids such as CBD and THC. For decades, it people assumed that terpenes did little more than enhance the scent of cannabis. However, recent research has revealed that both terpenes and cannabinoids work better together in what is known as the ‘entourage effect.’

It is also a fact that individual terpenes have an impact on the human body. The notion that terpenes directly affect brain function is obvious now. In the past, however, scientists found it hard to differentiate between the direct impact of terpenes on the brain and their indirect impact on mood.

As it happens, our sense of smell is linked to the brain’s memory and emotion centers. This means terpenes can hold a significant influence over our greater psyche.

As a result, there is a probable link between the scent of a terpene and its effect. Terpenes likely modulate the behavior of the brain’s cells. This, of course, has a major impact on brain processing. Marijuana produces an enormous number of terpenes, and like its cannabinoids, some are better known than others.

In this article, we talk about one of the most well-known cannabis terpenes of all: Linalool.

Linalool is found in over 200 plant species aside from cannabis and has a litany of uses. As a naturally occurring terpene, linalool has a lovely floral scent and is one of the main ingredients in essential oils such as lavender. It is typically used in up to 80% of aromatic hygiene products. You also find it in cleaning agents like soaps, shampoos, essential oils, and detergents. 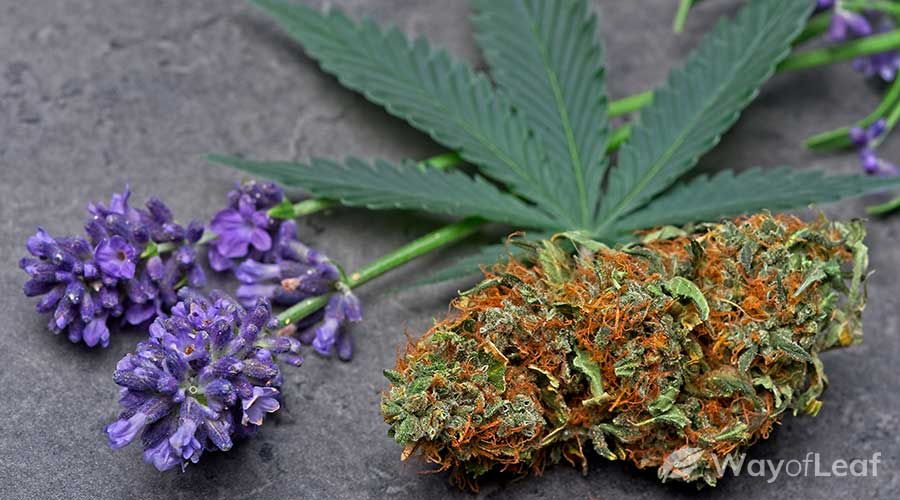 Did you know that the average person who doesn’t smoke weed consumes up to two grams of linalool per year? This fact emphasizes the number of products that the terpene is in.

Here is a shortlist of some of linalool’s potential uses. Please note that research is ongoing, so we can’t conclude as to the efficacy of the terpene for the following.

Linalool seemingly exhibits all of the characteristics and properties associated with an anti-inflammatory agent. Inflammation is often characterized by pain, swelling, a sensation of heat, and redness. It is one of our body’s crucial defense systems and it is often a beneficial response. However, sometimes, it could result in chronic inflammatory conditions if left untreated.

Given lavender’s reputation for promoting restful sleep, it is hardly a surprise that linalool is also known for its sedative and calming effects.

Evidence of its sedative nature came almost by accident when a 2009 study tried to find proof that linalool possessed anxiolytic (anti-anxiety) properties. Instead, the research found that it had strong sedative qualities. There is also evidence to suggest that linalool enhances the effect of sedatives, including pentobarbital.

A more recent study by Takeda et al., published in Evidence-Based Complementary Alternative Medicine in March 2017, looked at how inhalation aromatherapy helped elderly volunteers with insomnia. The researchers discovered that the act of sniffing lavender oil before bed increased sleep quality. It also increased energy levels in the morning after. Of course, lavender contains a lot of linalool.

As a monoterpene compound, linalool is in a large portion of essential oils from plant species that give off a sweet scent. Medicinally, most of these plants are useful for their painkilling properties.

It is also possible that the terpene’s pain-killing capacity is because it elevates adenosine levels, which is a brain chemical that is blocked by caffeine.

A 2007 study by Kim et al. found that in obese patients who underwent gastric banding surgery (and were exposed to linalool-containing lavender oil), only 46% required opioids after the procedure. This compared favorably to the control group, as 82% of them required pain medication.

Another study, published in Frontiers in Behavioral Science in 2018, looked at the impact of linalool on mice. The test exposed the rodents to vapors from the terpene, and they showed a decreased level of anxiety and depression-like behavior. Mice exposed to linalool also spent more time in ‘fear-inducing’ environments, and worked harder and longer to escape from a doomed situation.

Meanwhile, a study published in the Journal of Agricultural and Food Chemistry in 2009, found that linalool improves the immune system’s resilience to stress. Stress is known to change white blood cell distribution, which causes an increase in neutrophils and a decrease in lymphocytes.

The study found that linalool prevented this shift in rats, thus ensuring the rodents were not exposed to typical stress-induced physiological changes.  Authors of the study believe the terpene activates our parasympathetic response, which occurs when we digest food or when we are resting.

A further study published in Neuropharmacology in March 2016, suggests that linalool is a possible treatment for Alzheimer’s. It is a disease known for causing the build-up of cellular “tangles” and brain plaque that results in the degeneration of the neurons and cerebral tissue.

The study in question looked at mice. It found that the terpene reversed a number of the cognitive and behavioral impairments associated with Alzheimer’s. It also reduced the number of cellular tangles and brain plaques that are commonly part of the condition.

According to a toxicity profile conducted in 1995, linalool was an irritant to the skin of several lab animal species. In humans, it also seems to cause minor skin irritation. The report concluded that it was of “low acute toxicity” when given to rats orally, and also on the skin of rabbits. 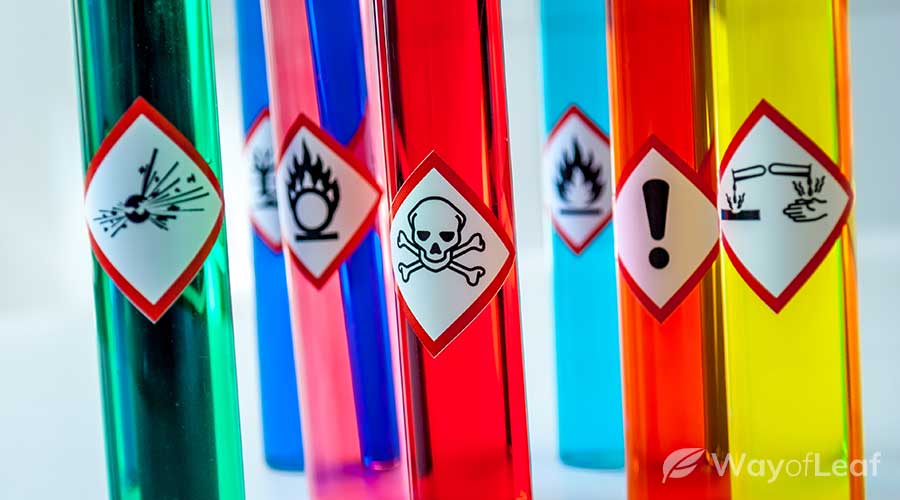 A more recent report stated that at concentrations of up to 20%, linalool was consistently found not to be a sensitizer in tests on humans. In other words, it was neither phototoxic nor photoallergic. However, it could cause allergic contact dermatitis in some individuals. In animal studies, it was irritating to rabbit skin but was not a sensitizer in guinea pigs.

While there is a risk of skin irritation and allergic reactions, this terpene is not a skin allergen in its pure form. However, once linalool oxidizes, it is capable of causing adverse reactions or sensitivity in high concentrations. In simple terms, oxidized linalool can cause problems, but if you use a pure and fresh linalool extract, or an essential oil containing it, you should suffer no ill effects. 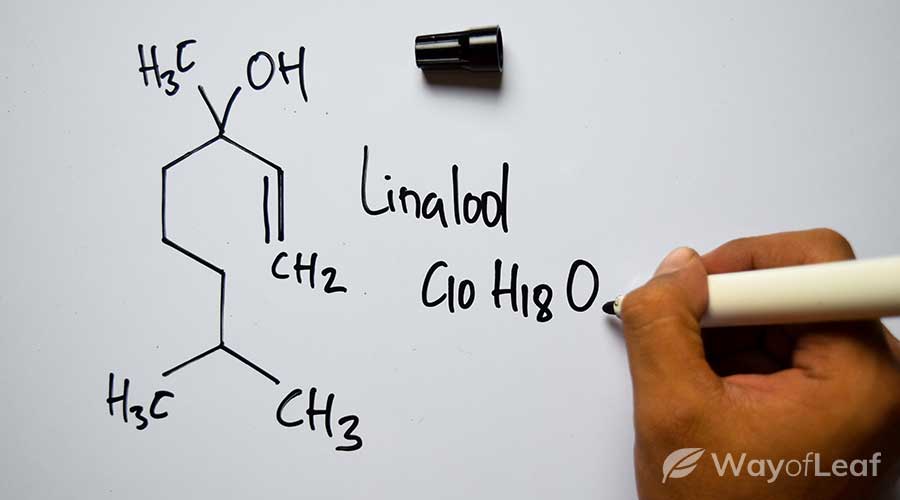 That said, some studies call into question the safety of lavender oil use. One study, in particular by Prasher, Locke, and Evans, published in 2004, found that lavender oil is cytotoxic (causes cell death) at a concentration of 0.25%. This is concerning because the standard recommended concentration for essential oils is between 0.5% and 1%.

Linalool and linalyl acetate (another major component of lavender oil) were assessed for their cytotoxicity. Researchers discovered that linalool’s activity reflected that of the whole oil. This is a clear sign that the terpene is possibly the oil’s active ingredient.

Various studies, along with anecdotal evidence, now seem to suggest that linalool is a likely skin irritant capable of causing contact dermatitis in sensitive individuals. Once it oxidizes, it can also become an allergen or sensitizer. Interestingly enough, some experts believe you can prevent oxidation by merely sealing the lid on a container of any product containing linalool. 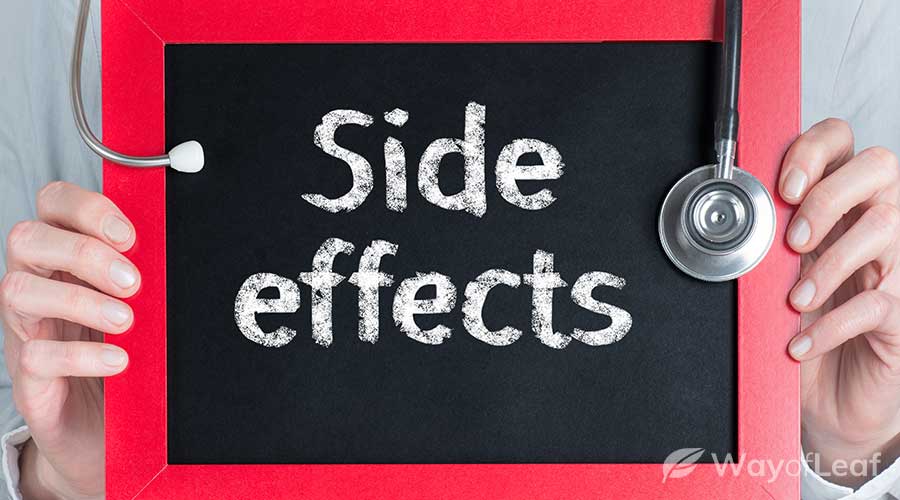 As such, it seems that linalool only causes allergies when oxidized. As for why people become sensitive to the terpene, medical researchers are unable to agree. It almost certainly involves the immune system, however. For instance, allergic contact dermatitis occurs when your skin reacts after exposure to a foreign substance.

Once you develop an allergy to linalool, it only takes a small amount to trigger a reaction.

If you have a known linalool allergy, be sure to avoid essential oils, including Howwood, Rosewood, Coriander, Linaloe, Lavender, Bergamot, and Petitgrain. Other potential side effects of linalool exposure can include facial psoriasis and eczema. One study tested 3,000 patients who had eczema by rubbing a patch containing oxidized linalool on their skin, and results showed that up to 7% of them displayed an allergy to the terpenoid.

Which Marijuana Strains Contain the Most Linalool?

This indica-dominant strain is a cross of OG Kush and SFV OG Kush. It has a THC content of 18-24%, with no more than 0.3% CBD usually. This strain also contains significant amounts of linalool, humulene, and beta-caryophyllene.

Users often say that Fire OG is one of the best strains for helping them to relax after a long, hard day. You may also notice the delightful herbal sweetness as you smoke it.

It is not surprising to find that a strain called Lavender has large amounts of linalool!

It is an eclectic mix of Hawaiian, Afghani, Super Skunk, and Big Korean Skunk. This strain is a slightly indica-dominant hybrid.

We recommend caution when using it because its THC level can hit 27%! Bask in all the glory of sweet-smelling flowers, herbs, and spices.

This is another extremely relaxing strain that will make you want to lie on the sofa for the rest of the evening. It is another slightly indica-dominant hybrid and has a THC content of 22%.

Scooby Snacks is a cross of Face Off OG and Platinum Girl Scout Cookies. Those who use this strain with its West Coast genetics love the sweet lemon and pine notes.

Though this strain sounds like someone fell asleep on a keyboard, it is a potent cross of Grapefruit and Grape Ape. It won the prize for the best indica at the 2015 Cannabis Cup in Michigan and San Francisco.

If you want a milder strain with linalool, Zkittlez is an excellent option. Its THC content ranges between 9-19%. Users say that this balanced hybrid has a marvelous citrus scent with hints of sweetness.

This strain is a cross of Face Off OG and Girl Scout Cookies. Though we call it Do-Si-Dos here, it has an array of nicknames. These include Peanut Butter strain, Cookie Face, Dosey Do, and Raspberry Cookies.

It is an indica-dominant strain with a wildly varying THC content. It can range from 13% to 24%. Do-Si-Dos offers a splendid aroma of lime, mint, and pine.

There is no doubt that linalool offers a wide array of benefits. It possesses antimicrobial and anti-inflammatory properties, improves sleep, reduces anxiety and stress. It also helps with skin conditions in individuals who are not allergic to it. You will find it in dozens of essential oils, including lavender, which means it is easy to find.

However, oxidized linalool can cause allergic reactions in a certain percentage of the population. Side effects include skin conditions such as eczema and contact dermatitis. If you use essential oils and are suffering from an allergic skin reaction, perform an allergy test to see if linalool is the cause.