Indica, Sativa, Hybrids [What You Need to Know]

If you are relatively new to the world of weed, you may not fully understand the different types of marijuana. You may have heard terms such as ‘indica,’ ‘sativa,’ and ‘hybrid’ used to describe different strains.

For example, Northern Lights is an indica, Super Silver Haze is a sativa, and Blue Dream is a hybrid strain. But what’s the difference?

Initially, there were cannabis indica and cannabis sativa plants. However, generations of crossbreeding have led to an enormous number of hybrids. Here is a quick explanation of three main strain types, followed by a brief history of these strains.

Marijuana – Origin of the Species

Cannabis is one of the oldest crops in the world. There is evidence that it has been grown for over 12,000 years. However, its history almost certainly goes back even further. Despite this fact, humans did not distinguish between indica and sativa strains until the 18th century. Cannabis sativa was the first species to receive a name. Carl Linnaeus, a Swedish botanist, found a strain in 1753 and called it ‘sativa,’ derived from the Latin word for ‘cultivated.’

Initially, Sativas flourished in countries located near the equator, such as Thailand and Colombia. This is because they grow best in hot climates with plenty of sunshine. At the time, Linnaeus understandably believed it was the only form of the plant because there was nothing to compare it to.

However, in 1785, a French naturalist named Jean-Baptiste Lamarck discovered an entirely new marijuana type. These plants were far shorter, densely branched, and laden with broad leaves. The leaves were considerably darker than those of the sativa plant because of the higher chlorophyll concentration. Lamarck called the species Cannabis indica, a plant that was grown in places such as India and Turkey.

Indica plants have developed specific characteristics to enable them to grow in harsh environments. For example, they produce a sticky, organic substance known as resin, which also happens to boost potency. Hybrids were developed much later. They are a feature of the modern era as breeders attempt to create unique marijuana strains.

There is another marijuana strain type that is still relatively rare.  D.E. Janischevsky, a Russian botanist, classified Cannabis ruderalis in 1924. The name comes from the word ‘ruderal’ which describes a plant capable of growing in the harshest climates. Janischevsky noticed that the ruderalis was significantly different from either Indica or Sativa plants.

For a start, it seldom grows taller than 0.8m and has a ‘wild’ appearance without branches. Recent research has discovered that several marijuana species are not related to either indica or sativa, and concluded that they must be ruderalis. These plants have a low THC concentration, which means they are not used in medical circles. Breeders now use ruderalis genetics for autoflowering strains.

Can You Tell an Indica From a Sativa?

You can simply Google the names of strains to find out whether they are indicas or sativas. However, being able to spot the difference from a quick look is a great skill to have. As you know, the most common way to purchase marijuana is in dried bud form. The best way to distinguish the two types is through close analysis of the buds. The name of a strain can sometimes be a giveaway, too.

How to Spot a Sativa

Sativa plants are tall and thin, and their buds are looser and lighter than their indica counterpart. When a sativa plant blooms, its flowers form along the branch and seem ‘stretched out.’ As a result, you end up with buds that are not particularly dense. Also, sativa plants tend to flourish in warm climates. This means they often have deep red or orange color accents on the buds.

How to Spot an Indica

Indica plants are shorter and more compact, and their buds follow suit. When you analyze an indica plant’s buds, notice how dense they are. This is because their blossoms tend to stick close to the stem’s nodes during flowering. The result is a set of buds that seem ‘fuller’ and feel firmer to the touch. As indicas usually grow in colder climates, they develop a touch of purple coloring. 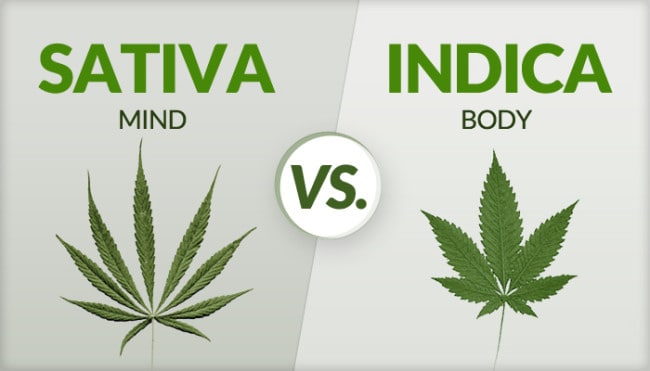 What’s in a Name?

Traditionally, strains with the name ‘haze’ are sativas, while those with ‘Kush’ are indicas. However, the proliferation of crossbreeding and the creation of various new strains means it isn’t easy to determine the type of marijuana you’re getting from the name alone.

Matters aren’t helped by the fact that companies create their own names for strains. Growing conditions change the characteristics of a plant. Therefore, if two companies are selling Girl Scout Cookies, for example, you don’t necessarily get the same effects.

We can fall into the trap of assuming that an indica or sativa plant only produces a specific type of effect. This is fundamentally untrue. A cannabis plant’s cannabinoids and terpene content are responsible for the different effects produced.

At the time of writing, researchers have identified over 110 cannabinoids in the marijuana plant. Some experts believe there are probably over 200. These cannabinoids have a significant impact on your body and mind because of their effect on the human endocannabinoid system (ECS), which scientists discovered in 1992.

The ECS consists of a series of receptors located in the glands, cells, organs, and brain. They produce substances akin to marijuana cannabinoids, which affect inflammation, pain, mood, memory, and a host of other functions. If you have even a vague familiarity with weed, you will have heard of the cannabinoids THC and CBD. They are the most abundant cannabinoids in marijuana plants.

THC is the best-known cannabinoid because of the intoxicating high it provides. CBD has gained global attention in recent years because it is associated with a variety of medical benefits and does not cause a ‘high.’ Other important cannabinoids include CBN and CBG.

Indica and sativa plants contain all of these cannabinoids. It is the quantity of cannabinoids that dictates a plant’s effects. For a long time, it was believed that indica plants had higher levels of THC, while sativas had more significant amounts of CBD. High in THC strains are popular amongst patients who need a robust euphoric experience to combat pain, anxiety, and depression.

Strains high in CBD contain minimal THC and are typically used by patients seeking relief for their symptoms without the intoxicating effects. Strains with a balanced THC/CBD level, such as Harlequin, offer symptom relief and mild euphoria. Of course, it isn’t this simple!

Have you ever tried aromatherapy to relax your mind and body? If so, you have already experienced the effects of terpenes, the aromatic compounds found in marijuana, fruit, and other plants. The fantastic smell of citrus or pine you get from your favorite strain is due to its unique terpene content. To date, researchers have identified well over 100 terpenes. There are likely hundreds more.

Terpenes are capable of stimulating or relaxing an individual. A plant’s terpene type and content also help dictate the strain’s effects. For instance, linalool is known for providing relaxation, whereas pinene offers a mental and physical boost. We advise you to become familiar with a strain’s terpene content. This process will improve your knowledge of how to choose the right strain for your needs.

Terpenes potentially alter the effect of THC on your body and have an impact on potency. For instance, you could have two strains with a THC content of 18% apiece. However, if they have different terpene content and types, one strain could be more potent than the other and provide effects that you don’t expect.

Initially, it was believed that indicas tended to have sweet fruity flavors such as grape and blueberry. In contrast, sativas typically had pine and earth aromas. However, increased awareness of terpenes has shown us that a strain can have any flavor or smell, regardless of whether it is a sativa or an indica.

A hybrid is a combination of two or more marijuana strains. It is a great way to mix the power of an indica with a sativa. OG Kush is a prime example of a strain capable of providing the ‘best of both worlds.’ It offers the uplifting euphoria of a sativa and the body relaxation of an indica. Generally speaking, there are three types of hybrids:

Picking the Right Marijuana Strain for You

A highly-rated marijuana strain is not necessarily the right option for your specific needs. Overall, your choice of weed depends on your experience and tolerance level, coupled with your requirements. Here is a brief snapshot:

It is probably best if you don’t associate indica, sativa, and hybrid strains with specific effects. In reality, it is the cannabinoid and terpene content of a marijuana plant that dictates its effects. Although sativas tend to have more CBD and indicas usually have a higher level of THC, this is not always the case.

The development of hybrid strains has only served to muddy the waters even more. Ideally, it is best if you go to a dispensary and tell the budtender the effects you are looking for. If you want to get buzzed, choose a high THC strain with limonene. If you’re going to try and combat pain, opt for a high-CBD strain with lower THC that is rich in the alpha-pinene terpene.

Furthermore, the method of consumption also dictates how you feel after using any marijuana strain. Smoking weed burns off numerous terpenes and cannabinoids and provides a high that may last for 20-30 minutes.

Vaporizing is easier on the lungs and retains more cannabinoids and terpenes, so you could get a more satisfying high. Edibles take up to two hours to work, but the effect is more intense and longer-lasting. Topicals are rubbed on the skin and are best for pain and inflammation.

Finally, there is a big difference between dry herb and concentrates. Most dry herbs have a maximum THC content of 30%. However, there are concentrates with up to 99% pure THC, and these typically come in the form of wax or shatter.

All you need is a tiny amount of concentrate, and you should feel intense effects almost immediately. Be very careful when using a powerful concentrate from an especially potent marijuana strain, regardless of whether it is a hybrid, indica, or sativa.

Two parts of the cannabis plant that are inseparable.

How to Determine if Your Weed is Good

The good, the bad and the ugly