Licorice is a commonly enjoyed candy, with licorice flavoring featuring in a few different sweet treats. Historically, licorice root has been used as an herbal medicine for thousands of years. In Chinese medicine, this root is believed to have numerous beneficial properties.

Unfortunately, only a handful of licorice’s purported benefits have been scientifically studied. Plus, it poses several potential risks to those who use it. In this review, we delve into licorice root’s properties to discover whether it is an herbal remedy you should consider using.

The licorice plant (Glycyrrhiza glabra) is native to Western Asia and Southern Europe. Many people are familiar with it through black licorice, the popular candy. What many people don’t realize, however, is that this plant has been a type of herbal medicine for centuries. Consumers may also not be aware that you can overeat licorice, leading to heart issues and potentially heart failure. 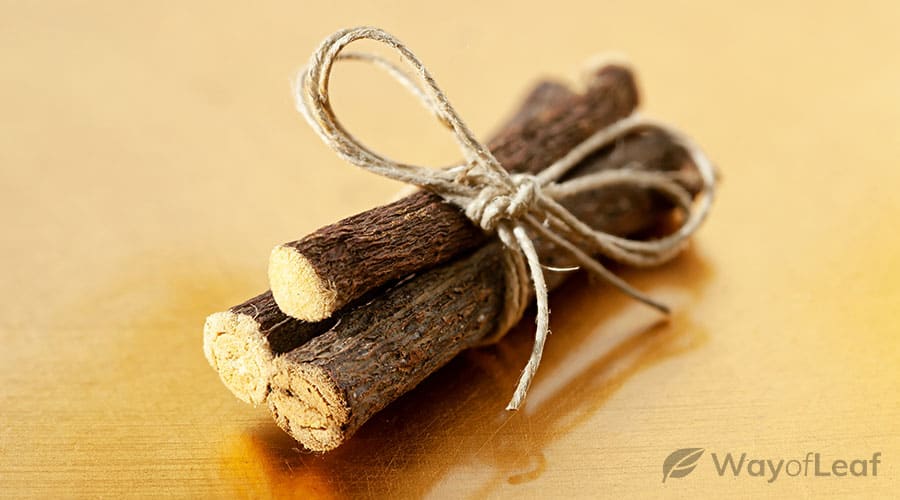 There are several potential uses for licorice, which is why it commonly features in tea and other health supplements. As an herbal remedy, it is considered a type of adaptogen. Licorice root, in small doses, could be great for those who often suffer from sore throats or heartburn, among other ailments.

Besides being an adaptogen supplement, licorice is used to flavor and color foods, beverages, and tobacco products.

Licorice root has a list of potential benefits, though these are not widely studied. Below, we investigate some of the purported licorice benefits and include the studies on them so far.

Current research does support several benefits of licorice, although many of the studies involve animals and test-tube models. As a result, they may not apply fully to human subjects, and more research is required to fully understand licorice.

There are over 300 compounds in licorice root, some of which could be beneficial for various skin conditions. Some studies, such as this 2015 article from the Beijing University of Chinese Medicine, have revealed that glycyrrhizin, one of the main active compounds, can act as an anti-inflammatory.

Glycyrrhizin’s ability to combat inflammation could help with conditions like acne and eczema.

Its ability to combat inflammation could help with conditions like acne and eczema. Research on licorice root for acne is limited, with mixed results. However, an older study from 2003 found that applying licorice gel to adult eczema improved symptoms over two weeks.

Heartburn is a common issue that adults suffer from; it can be painful and irritating to live with. Licorice root for acid reflux is one of the herb’s most common uses. It could also be employed to help with minor indigestion rather than more severe cases of gastroesophageal reflux disease (GERD).

There are a couple of studies in this area. A 2011 study administered 75mg licorice capsules to 50 adults with indigestion twice daily; the participants experienced significant improvements when compared with a placebo.

Another study, this time from 2013 and published in the journal Clinical and Experimental Gastroenterology, learned that licorice root could help with heartburn. This 8-week study included 58 adults with GERD, administering a low dose of glycyrrhetinic acid. A combination of licorice and standard treatment led to an improvement in symptoms.

It’s commonly reported that licorice roots can help with stomach pain. One double-blind study concluded that an extract containing glabridin and glabrene – two of the flavonoids in licorice root – effectively reduced nausea and stomach pain. This could be one reason why people take licorice supplements when feeling bloated and unwell.

Alternately, some users consume it for more severe issues such as stomach ulcers. An infection with bacteria called Helicobacter pylori can lead to peptic ulcers, which cause pain and other symptoms. There is potential to take licorice for ulcers in the stomach.

In 2015, researchers in Iran found that giving mice 91mg of licorice per pound of bodyweight protected against these ulcers. Licorice performed better than omeprazole, a common medication for peptic ulcers.

In 2016, researchers then discovered that licorice extract combined with standard medication reduced the presence of the H. pylori bacteria in humans. The study included 120 adults and is a promising start toward more research in this area.

There are several other purported benefits of licorice root, including the following:

Upper respiratory conditions: Since licorice is anti-inflammatory and antimicrobial, it could have applications in the fight against upper respiratory tract infections. It could help with conditions like asthma, especially when combined with regular treatments.

Protection against cavities: Licorice root could protect against the bacteria that cause tooth cavities. In a 3-week study, kids were given 15mg of licorice within sugar-free lollipops; the researchers found a reduction in the number of cavity-causing bacteria.

Diabetes: In one animal study, the daily intake of licorice root in rats was found to trigger improvements in blood sugar levels and kidney health. Notably, this effect has not been replicated yet in humans.

Weight loss: There are some reports that licorice can lower body mass index (BMI), supporting weight loss. However, other studies have reported that licorice has no effects on weight, so the outcome is unclear.

Menopause: There is some evidence that people undergoing menopause could use licorice root to combat hot flashes.

Users can take licorice root supplements in numerous forms. It’s common to use it in the form of licorice root powder, which is a common feature in teas and other beverages. You can also use licorice sticks, though these are less common as supplements and better as candy. 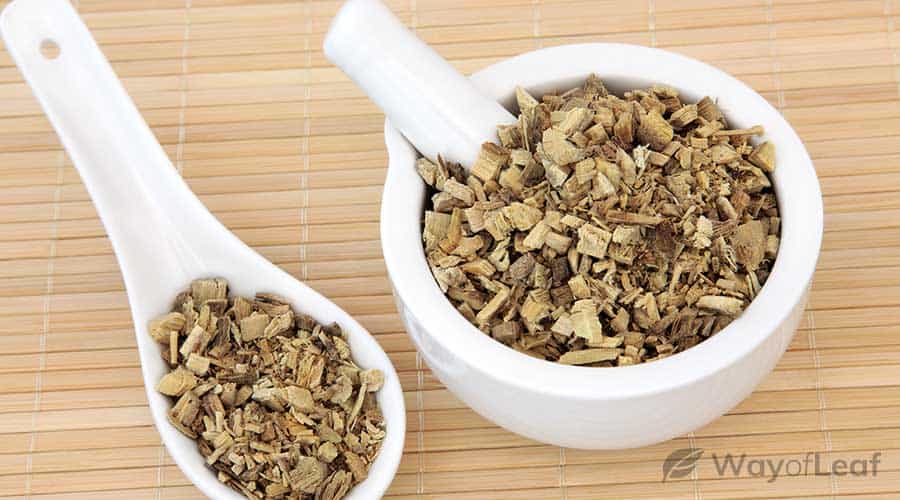 There is currently no recommended standard dosage. The World Health Organization (WHO) and the European Scientific Committee of Food (SCF) both recommend limiting glycyrrhizin intake to no more than 100mg per day.

Experts also warn that people over the age of 40 should be particularly careful with black licorice supplements. As a result, those above this age should consume even less.

When buying licorice, make sure to shop around for a brand and supplement you like. This is not a daily supplement like other adaptogens, so you don’t need to worry about picking something you can stick to.

Licorice has many side effects. It’s essential to be careful with the amount you take, as the side effects can be relatively severe.

Large doses of licorice root can cause glycyrrhizin accumulation. Elevated levels of this compound can lead to increased cortisol, the stress hormone. This can lead to other health complications.

Furthermore, licorice root can lead to a drop in potassium levels, which again can have knock-on effects on the user’s health. The common side effects are:

Although rare, it’s possible to suffer from licorice poisoning. This can result in kidney failure, congestive heart failure, or pulmonary edema (fluid in the lungs).

It’s essential to be careful with the amount of licorice you take, as the side effects can be relatively severe.

Furthermore, licorice can interact with several common medications, including:

Licorice root is an ancient medicinal herb. Studies point to a few potential licorice root benefits, including anti-inflammatory and antimicrobial properties. Users can consume licorice supplements to help with issues like stomach ulcers and heartburn, while topical applications may help with eczema.

More research is required into licorice, particularly as it can have many adverse effects. Currently, there is no recommended dosage, so it’s vital for users to exercise caution and only consume a small amount. Those on medications, or those who are pregnant, should avoid licorice root or consult a physician before using it.

Looking for a safer adaptogen for daily use? Check out the following guides: