Many people categorize goji berries as a superfood. They have been a popular ingredient in traditional Chinese medicine for centuries and are now becoming well-known worldwide.

Consumers can choose from a range of goji berry products, including juice and milk-based beverages. It is also possible to add the dried berries to herbal tea, soup, or congee.

So, what are the health benefits, and should you be eating them? Read on to find out.

What Are Goji Berries?

Goji berries are also known as wolfberries. There are two species: Lycium barbarum and Lycium chinense. The L. barbarum variety is the most common, and it is native to North-West China. It is a shrubby plant that produces small purple flowers and elongated red berries.

These berries are the part of the plant that people usually consume. However, traditional Chinese medicine also utilizes the root bark. 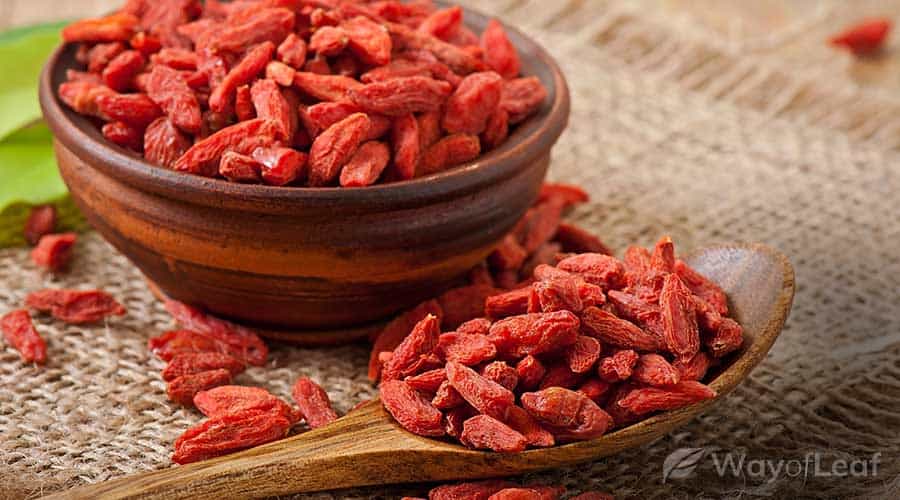 This ancient healing system classifies goji berries as a top-grade herb. This means they benefit health without damaging the body. However, there are a few possible side effects which we discuss in detail later.

Goji berries’ traditional uses include promoting wellbeing and longevity. According to legend, a community of elders routinely lived to the age of 90 or 100. They drank water from a well that was next to a goji berry bush. Therefore, a local physician hypothesized that the fruit falling into the well water was responsible for their long life.

Nowadays, goji berries are a common addition to health food products both in China and around the globe. Let’s look at why they have become so popular.

Goji berries contain various nutrients, including B vitamins, vitamin C, and essential minerals. Other biologically active components include polysaccharides, betaine, and zeaxanthin. It appears that zeaxanthin is the chemical responsible for many of the benefits of goji berries.

According to a 2011 publication, these benefits include antioxidant and immunomodulatory properties. The authors suggest goji berries may also possess the following properties:

Unfortunately, most of these claims are based on animal experiments rather than human research. Therefore, it is challenging to know how the results translate. However, several studies have investigated goji berries’ influence on human health. We will discuss a few examples below.

In Chinese medicine, one of the primary uses of goji berries is improving eyesight. Various research studies also support this use.

Experts believe that zeaxanthin is the chemical responsible for goji berries’ influence on eye health. It is a carotenoid, which is a type of pigment and gives the berries their red color. This pigment has antioxidant properties and plays a vital role in the eyes.

Most of the research to date has focused on a condition called age-related macular degeneration (AMD). It is a leading cause of eyesight loss among older people. AMD results from pigment changes in the retina. It can also involve the formation of structures called soft drusen that damage the macula over time.

A 2011 study investigated the effects of a milk-based goji drink in 150 healthy subjects aged 65–70. Half the participants consumed the goji beverage, while the remainder received a placebo for 90 days. They underwent an ophthalmic examination before and after treatment to assess pigmentation and soft drusen count.

Related article
Schisandra: What Is It and How Can It Help?

The results indicated that those in the placebo group had reduced pigmentation and increased soft drusen accumulation. However, those who consumed the goji drink remained stable compared to baseline. Subjects in the treatment group also demonstrated higher zeaxanthin levels and antioxidant capacity.

A 2018 study involved 114 patients aged 51–92 with early AMD. Half the participants took 25g of goji berries daily, while the remainder consumed their usual diet for 90 days. At the end of the trial, subjects in the goji group displayed increased zeaxanthin levels and macular pigment density compared to controls. They also had lower best-corrected visual acuity scores, indicating better eyesight.

Goji berries may also benefit the immune system. A 2009 study investigated the effects of drinking 120mL of goji juice (equivalent to 150g of fruit) daily. The participants drank the juice or a placebo for 30 days.

By the end of the trial, those who drank the juice had increased levels of immune cells, including white blood cells called lymphocytes. However, other cell types, such as CD4, CD8, and natural killer cells, were unaffected. The participants in the goji berry group also reported increased feelings of general wellbeing. They included improved sleep and fatigue scores and enhanced short-term memory and focus.

Research suggests that goji may influence immunity without inducing overstimulation.

A 2012 study found that drinking a milk-based goji product could impact the vaccine response in older people. The 150 participants were aged 65–90 and drank the beverage or a placebo for three months. The researchers assessed their response to an influenza vaccine as well as their inflammatory and physical status.

The results showed that those in the goji berry group had increased post-vaccination levels of influenza antibodies. However, there was no significant effect on the post-vaccination positive rate. Notably, the subjects did not display any hypersensitivity or increases in inflammatory markers. This suggests that goji may influence immunity without inducing overstimulation.

Finally, a 2012 study on mice produced some interesting results. Researchers fed the animals with a goji-berry milk drink before exposing them to the influenza virus. Although the goji preparation did not prevent infection, it did have some beneficial effects. They included countering infection-induced weight loss and reducing lung pathology.

There is also a suggestion that goji berries benefit overall subjective health and wellbeing. In a 2008 study, healthy adults drank 120mL of goji berry juice or a placebo daily for two weeks. Participants in the goji berry group reported improvements in several areas, including:

They also reported reductions in fatigue and stress. Meanwhile, those in the placebo group only noted improvements in two areas, heartburn and happiness.

Goji berries are highly nutritious and may be a valuable addition to a healthy diet. We have summarized some significant goji berries nutrition facts below:

Incorporating Goji Berries into the Diet

In Chinese culture, goji berries are thought to span the divide between food and medicine. Therefore, they are often added to dishes to create what are known as “medicinal meals.” Interestingly, goji berries are distantly related to several familiar foods, including potatoes, tomatoes, and eggplant.

Related article
American Ginseng: What Is It?

There are many different ways to incorporate goji berries into one’s diet. Typically, people infuse them into teas or medicinal brews alongside other herbs such as reishi or licorice root. People also add them to soup, hot pot bases, or congee.

Nowadays, it is common to find dried goji berries in health food stores around the world. They have a sweet, slightly tart flavor and can be used in the same way as any other dried fruit.

It is also possible to buy goji berry supplements, including powder, juice, and milk-based drinks. When purchasing these products, look for organic brands that provide lab reports to confirm their purity.

Chinese medicine formulas tend to contain anywhere between 6–18g of goji berries. However, this is usually in combination with other herbs.

The dose may be increased to 15–30g when using goji berries alone. For example, a 2005 study indicated that 15g of whole fruit daily is sufficient to boost zeaxanthin levels significantly. 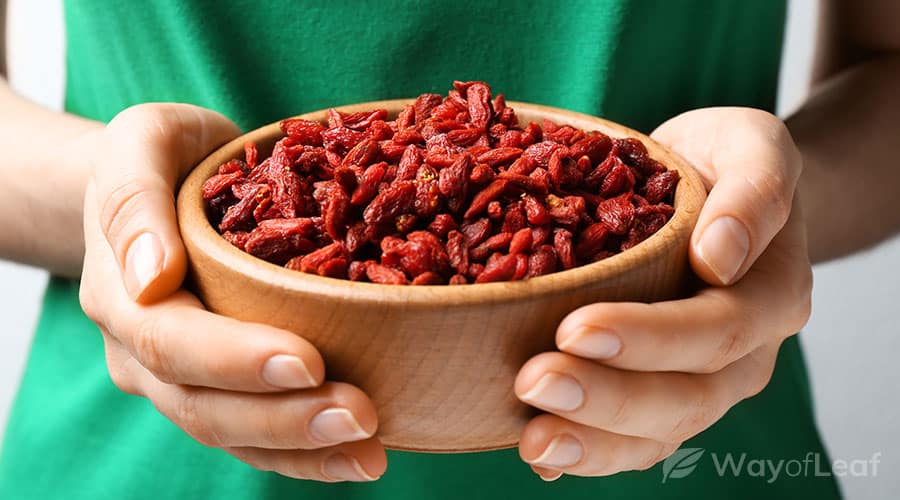 However, determining a suitable goji berry dosage will depend upon various factors. They include the general health of the consumer and the reason for taking them.

Goji berries are generally considered safe to use for periods of up to three months. However, they can cause allergic reactions in some people, especially those with allergies to tobacco, peaches, tomatoes, and nuts.

Goji berries can cause allergic reactions, especially in people with allergies to tobacco, peaches, tomatoes, and nuts.

Other possible side effects of goji berries include reducing blood pressure and blood sugar. Therefore, individuals taking medication for hypertension or diabetes should exercise caution. Goji berries can also interact with the blood-thinning medication warfarin.

Pregnant women should not use goji berries as they may stimulate uterine contractions. The fruit could also have estrogen-like effects, and people with estrogen-sensitive conditions should avoid them.

If in any doubt, consult with a healthcare professional before use.

Humans have been enjoying the health benefits of goji berries for thousands of years. Modern research has shown that they contain numerous active compounds and could benefit eye health, immunity, and more.

Goji berries could be a fantastic addition to one’s daily diet, but some people should not use them. We recommend seeking guidance from a knowledgeable healthcare provider before consumption.

Are you looking for a healthy way to spice up your diet? Check out the articles below to learn about some of the most exciting superfoods around: