Bryonia, also known as bryony, is a popular homeopathic remedy with a variety of applications.

However, scientific evidence relating to its purported benefits is limited. Furthermore, it could potentially be dangerous in some circumstances.

We take a closer look at this controversial plant, why people use it, and whether it is safe.

There are ten Bryonia species, but the best-known is Bryonia alba. It has many alternative names, including white bryony, wild hops, devil’s turnip, and western kudzu.

The plant originates from Eastern Europe, spreading as far as the Ural Mountains and Iran. However, it has become naturalized in several American states, including Washington, Idaho, Utah, and Montana. It is widely considered a noxious weed due to its rapid and prolific growth, which tends to smother native species.

The plant itself consists of a fleshy, parsnip-like root, which produces vines resembling kudzu in their appearance and growth habits. It has small, greenish-white flowers and dark blue berries that emit a foul odor when crushed. 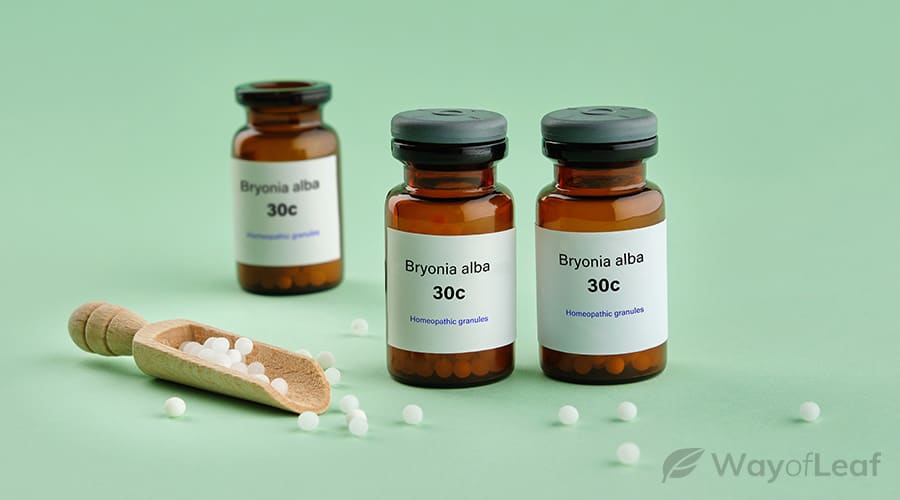 Bryonia contains several chemicals that are toxic to humans and livestock. However, it has a long history of use as a magical and medicinal herb. It was popular during the 18th century throughout Europe and had many purported benefits.

During the 19th and 20th centuries, Bryonia fell out of fashion. Nowadays, its primary use is as a homeopathic remedy.

In homeopathy, substances such as plants and minerals are diluted so heavily that unmeasurable amounts of the active compounds remain. This process reduces toxicity but has also led many scientists to question its efficacy. Indeed, there is little clinical evidence to support the use of homeopathic products.

Nevertheless, there are a handful of research studies that suggest Bryonia may have some benefits. Let’s take a look at a few examples.

The aerial parts of Bryonia contain compounds called flavonoids which may give the plant antioxidant properties. It is also widely considered an adaptogen and licensed for use in several Eastern European countries.

Adaptogens are herbs that have non-specific effects and help the body to cope with stress. They tend to work by influencing the nervous and immune systems.

According to a 1997 publication, Bryonia has immunomodulatory and stress-protective properties. Doctors reportedly used it to treat Chernobyl nuclear reactor workers affected by the plant’s famous 1986 disaster. The paper also suggests it could protect the body against damage during radiation therapy.

If these accounts are accurate, Bryonia could conceivably be classed as an adaptogenic herb. However, this classification is up for debate since Bryonia contains several toxic chemicals. One of the definitions of a true adaptogen is that it should not harm the human body.

In homeopathy, the best-known Bryonia health benefits include treating coughs and vertigo and reducing inflammation. Below is some of the current research on these topics, as well as the possible side effects.

One of Bryonia’s most common homeopathic uses is as a cough remedy.

In homeopathy, an individual’s treatment depends upon the specific symptoms. For example, a dry, tickly cough and a productive cough would likely require different prescriptions.

In her 2009 book Integrative Medicine for Children May Loo, M.D. describes a “bryonia cough” as being:

However, Dr. Loo also notes that there are no controlled clinical trials on homeopathy for coughs. Unfortunately, this is a running theme when it comes to Bryonia research.

Although there is little clinical evidence, a 2021 study investigated homeopathic remedies in the treatment of COVID-19. It is well-known that one of this virus’ main symptoms is a persistent cough.

The study involved patients with mild to moderate COVID-19 symptoms at a center in New Delhi. The results showed that Bryonia alba was the most frequently prescribed remedy, used in 33% of patients.

There was a 78% recovery rate overall, although it is unclear precisely what role the homeopathic remedies played. This is because COVID-19 is a self-limiting disease that usually resolves without treatment within 14 days. The participants also received conventional medicines in addition to homeopathy.

Another homeopathic use of Bryonia is as a vertigo treatment.

A 2016 study investigated this theory. It involved 30 participants with benign paroxysmal positional vertigo (BPPV) who took various remedies. The results showed that Bryonia was the third most frequently prescribed treatment after sepia and natrum muriaticum. Practitioners recommended it for 3/30 cases, all of whom experienced improvements.

Related article
Can I Use CBD Oil to STOP My Vertigo?

Unfortunately, the nature of the study means that the data are not particularly reliable. For example, there was no control group, creating a high risk of the placebo effect. Therefore, further research is necessary to confirm whether there is a link between Bryonia and vertigo.

According to a 2019 publication, Bryonia has anti-inflammatory and antinociceptive (painkilling) properties. It states that Turkish folk medicine recommends applying the roots to joints to relieve rheumatic pain. However, research in this area has mixed results.

The results showed that the dilutions suppressed pro-inflammatory chemicals, including TNF-alpha, IL-1-beta, and IL-6, in cell lines and mice. However, Bryonia was only effective at specific concentrations, while arnica performed more consistently.

Bryonia reportedly has anti-inflammatory and painkilling properties but research in this area has mixed results.

Inflammation is one of the few areas where human research on Bryonia exists. A 2010 study looked at Bryonia’s anti-inflammatory effects in patients undergoing aortic valve surgery. Researchers compared a combination of Bryonia and arnica to a placebo in 92 participants.

Outcome measures included C-reactive protein (CRP), an inflammatory marker, among several others. However, the study’s results showed that the homeopathic remedies had no significant effects in any area.

As we already mentioned, Bryonia contains toxic chemicals, and there have been reports of poisonings. Therefore, it is potentially dangerous to consume in its natural state.

Homeopathic remedies reduce the risk of toxicity by diluting the extract many times. However, this does not necessarily make them safe. 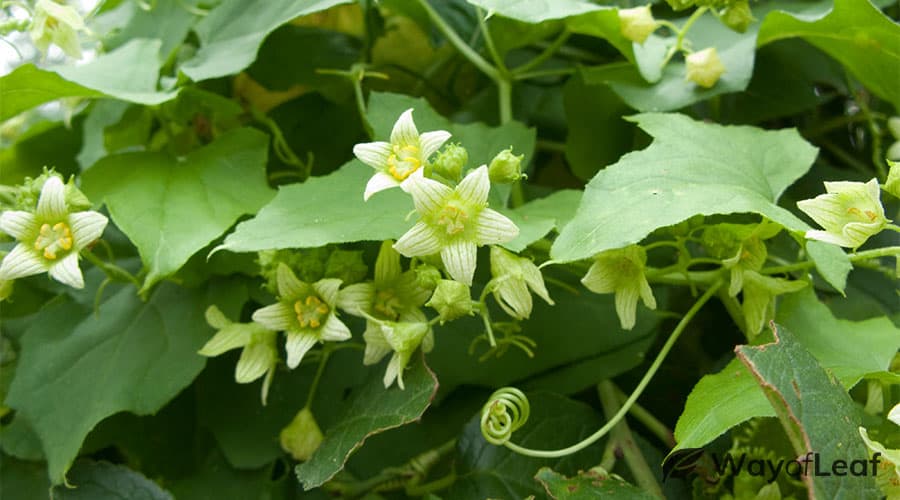 Homeopathy is a controversial treatment due to the unusual science behind it, and no homeopathic remedies have received FDA approval. Therefore, the market is not regulated, and many products do not meet quality, strength, and purity standards.

A 2012 review linked a total of 1159 direct and indirect adverse effects to homeopathy treatment. It demonstrated that homeopathy side effects included allergic reactions and intoxication and ranged from mild to severe, including four fatalities.

Furthermore, as an unproven therapy, homeopathy is not an appropriate substitute for standard medical care. Therefore, individuals should not use it to treat any serious or life-threatening disease.

Bryonia is a fascinating plant with a history of use in folk medicine. However, while some sources suggest that Bryonia has health benefits, it is also potentially dangerous.

Its most common use is as a homeopathic remedy for coughs, vertigo, and inflammation.

Unfortunately, though, there is little evidence to support its use in humans. Furthermore, homeopathy can sometimes do more harm than good.

Anyone thinking about using Bryonia should consult a healthcare professional first and carefully consider the risks.

Looking for a safe and effective herbal remedy? Check out some of our favorite adaptogen supplements below: