Humans have used burdock as food and medicine for thousands of years. It is a crucial component of traditional Chinese and European medicine, and its root is consumed as a vegetable throughout Asia.

Burdock roots, leaves, and seeds are known to have numerous benefits for human health. Modern research suggests that many of them are due to potent anti-inflammatory and antioxidant properties. However, burdock has many other benefits with a reasonable amount of scientific evidence to support them.

This article explores the various reasons for using a burdock supplement and whether this herbal remedy is safe. Here’s all you need to know.

There are several different burdock species, but greater burdock (Arctium lappa) is the most common. Its Latin name derives from the Greek word arktos, meaning “bear.” This is most likely a reference to the plant’s fuzzy leaves.

It is native to Asia and Europe and was introduced to North America by European settlers. It has now become naturalized in many areas worldwide. In some places, it is considered an invasive weed. 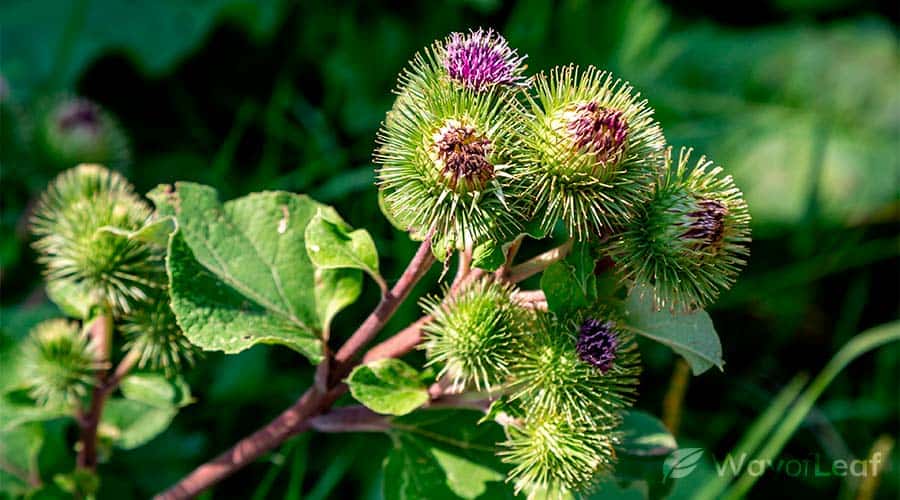 The biennial plant grows up to three feet tall and has large, downy, heart-shaped leaves. It flowers from July to September, producing purple, thistle-like blooms. The flowers are followed by the plant’s characteristic burrs. These spiky, sticky seed pods are designed to cling to animals’ fur, allowing them to be transported for many miles.

Burdock roots, leaves, and seeds can be used to make medicine; each has slightly different benefits. Below we will explore the primary active compounds in burdock and how they affect human health.

How Does Burdock Work?

Burdock contains hundreds of biologically active chemicals. Two of the most clinically important are arctigenin and arctiin. These two closely related compounds have anti-inflammatory and antioxidant properties and also act as phytoestrogens. This means that they work similarly to estrogen within the body and could affect hormonal function.

Burdock is also rich in flavonoids and phenolic compounds, both of which are known for their antioxidant effects. Inulin is another crucial component. It is a form of carbohydrate that can help to regulate blood sugar.

Furthermore, the plant is highly nutritious and contains a variety of fatty acids, amino acids, vitamins, and minerals, including:

The chemical makeup of burdock roots, leaves, and seeds differs slightly, meaning each has unique benefits. Next, we look at these benefits in detail and explore whether there is any scientific evidence to support them.

Burdock has many uses in Asian, European, and North American folk medicine.

In traditional Chinese medicine, its seeds are primarily used as a “blood purifier” to remove toxins from the body. In biomedical terms, this could translate to treating inflammatory diseases, including skin disorders and acute infections. It has also been promoted as a natural aphrodisiac.

Burdock leaves have traditionally been used topically as a remedy for headaches, bruises, or hair loss. Furthermore, Native Americans included the root in herbal preparations to assist labor.

There is limited clinical evidence to support many of these applications. However, modern research has highlighted several scientifically-backed benefits of burdock, which we will discuss below.

It is essential to note that many of these studies involved animals or isolated cell lines rather than human subjects. Therefore, further research is required.

Various parts of the burdock plant appear to have anti-inflammatory properties. These effects have been mainly attributed to arctigenin and arctiin, although other chemicals also likely play a role.

Research has demonstrated that burdock extracts can inhibit a biological system known as the nuclear factor kappa B (NF-κB) pathway. Its functions include regulating innate immunity by linking cellular danger signals to pathogens.

Burdock also appears to reduce the release of nitric oxide. This chemical is responsible for increasing blood circulation, a key feature of inflammation.

Finally, it decreases the release of pro-inflammatory chemicals, including cytokines, histamine, and prostaglandins.

Various chemicals in burdock, including flavonoids and polyphenols, have powerful antioxidant properties. They counteract the effects of harmful molecules known as reactive oxygen species (ROS) to prevent cellular damage.

Some people also use burdock leaf preparations as a mouth rinse to prevent tooth and gum disease due to its antibacterial effects.

Due to its anti-inflammatory, antioxidant, and antimicrobial effects, burdock may be an effective remedy for several skin conditions. They include rashes, boils, abscesses, eczema, acne, and psoriasis.

There is also some evidence that burdock inhibits two enzymes, elastase and tyrosinase. Elastase breaks down elastin, a component of skin that contributes to its elasticity. Meanwhile, tyrosinase plays a fundamental role in skin pigmentation. Therefore, burdock could have antiaging effects, helping to keep the skin supple and reducing sun damage.

When using burdock for skin, it can be taken internally or applied topically as an oil or body wash.

As we mentioned, burdock contains inulin, a carbohydrate that helps to regulate blood sugar. It also contains other chemicals such as sitosterol-β-D-glucopyranoside that have possible blood sugar-reducing effects.

Elevated blood lipids such as triglycerides and cholesterol increase the risk of high blood pressure and heart disease.

Burdock has also been investigated as a performance-enhancer.

In a 2017 study, researchers tested a burdock extract on mice subjected to a swimming test. The treatment appeared to increase endurance and reduce fatigue. In another experiment, the extract increased the animals’ grip strength.

An earlier study from 2012 suggested that burdock could also enhance male sexual performance. Treated rats displayed increased mounting frequency, penetration, and ejaculation frequency compared to controls. However, the increases were less significant than in rats treated with sildenafil (Viagra).

Burdock is generally considered safe when taken in appropriate doses. However, it can cause adverse reactions in some individuals.

The most common burdock side effect is contact dermatitis due to topical applications. Some people could also have an allergic reaction to oral burdock products. They could cause symptoms like hives or more serious anaphylactic reactions. 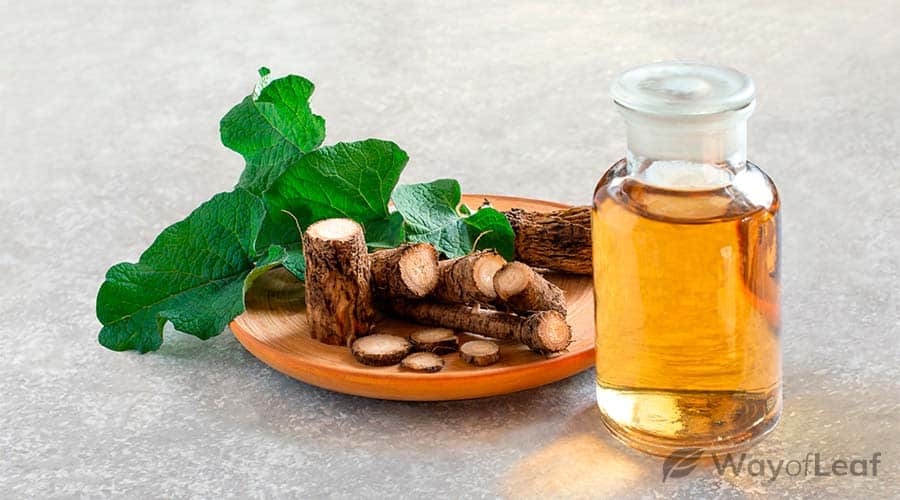 Burdock may also interact with some pharmaceuticals or other herbal remedies. These include:

Anyone taking other medicines should consult a healthcare professional before using burdock or any other supplement.

The herb is not considered safe during pregnancy or breastfeeding. People suffering from dehydration should also avoid taking burdock supplements.

There are many different burdock products on the market, including pills, tinctures, powders, and teas. Pills and tinctures provide the most convenient consumption methods and allow more accurate dosing than powders and teas.

When choosing a product, read plenty of reviews on third-party sites to determine whether the brand is reliable. The dietary supplements industry is not well-regulated, meaning there are plenty of low-quality items for sale. Therefore, consumers need to research any purchases thoroughly.

Look for manufacturers that provide lab reports for their products to confirm that they are free from contaminants. This is essential when buying burdock supplements as, in the past, some items have been adulterated with deadly nightshade (Atropa belladonna) root. This plant is highly toxic and potentially lethal when consumed in large amounts.

The optimal burdock dosage will depend upon the individual using it and their desired outcomes.

Traditionally, people would make burdock tea by simmering a tablespoon of roots, leaves, or seeds in two cups of water for 20 minutes. The resulting liquid can be drunk (up to four cups daily) or used as a skin wash.

For commercial products such as pills or tinctures, follow the manufacturer’s guidelines regarding dosage. Do not exceed the maximum daily dose.

The Bottom Line on Burdock

Humans have used burdock as a nutritious vegetable and versatile herbal medicine for centuries. It has various benefits, primarily due to its anti-inflammatory and antioxidant effects. It also influences hormonal function, lipid metabolism, blood sugar control, and more.

Burdock is generally considered safe but can cause side effects in some people. It can also interact with various medications. Therefore, individuals should seek medical advice before using a burdock supplement for the first time. It is also essential to only purchase from reputable brands to ensure the product is safe and effective.