Wood ear mushrooms are edible fungi with various health benefits. They grow in many regions worldwide but are especially popular in Asian cuisine.

This article explains all you need to know about wood ears, including their nutritional value, healing properties, and more. Read on for our complete guide.

Wood ear is just one of many names for the fungus Auricularia auricula. It is also known as jelly ear, tree ear, Jew’s ear, black fungus, mu er, and kikurage. As many of these names suggest, the fungus produces mushrooms that closely resemble a human ear.

Wood ear is a saprophytic organism, meaning that it feeds on decaying organic matter. It releases specialized enzymes that break down lignin, a key component of wood. It is possible to find it growing on dead trees in temperate and subtropical regions worldwide. However, it is most widespread throughout North America, Europe, and Asia. 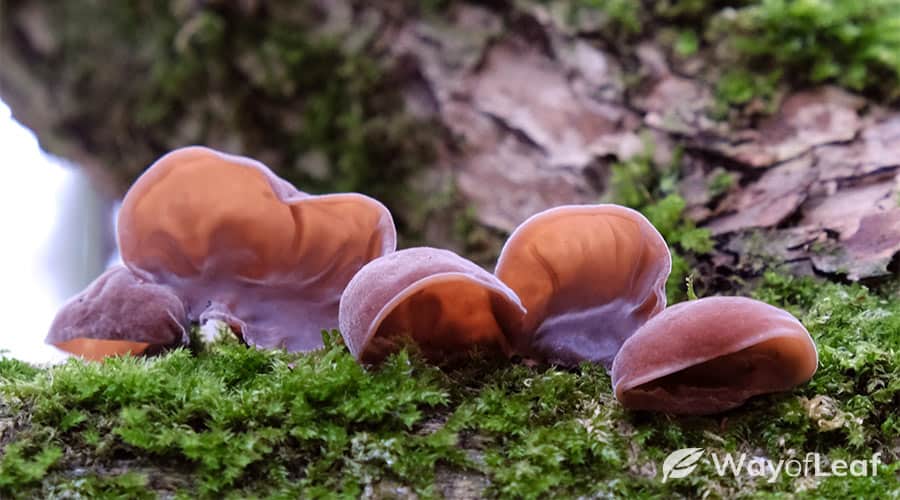 The mushroom is widely cultivated as a food, and Asia alone produces over 100,000 tons annually. In recent years, scientists have also become interested in its potential therapeutic properties.

Like many other mushroom species, it contains a wealth of bioactive compounds that could positively impact human health. Let’s take a closer look.

According to publications from 2015 and 2021, there is evidence to support the following wood ear mushroom benefits:

The results showed that the three mushroom species had an antitumor activity of 44.21%, 39.46%, and 36.64%, respectively. This finding is highly significant as it suggests that wood ears may have even more potent antitumor effects than reishi. The latter is sometimes called the “Mushroom of Immortality” and is well known for its healing properties.

Another key area of study is wood ear’s effects on cholesterol. A 1996 study compared it to Tremella fuciformis, another edible and medicinal mushroom. The researchers fed rats a high-cholesterol diet alongside the mushrooms for four weeks.

Research has shown that wood ear mushrooms have antioxidant properties and antimicrobial activity.

The results showed that both mushrooms reduced total cholesterol, by 17% and 19%, respectively. They also decreased low-density lipoprotein (LDL) cholesterol, which is associated with cardiovascular disease development, by 24% and 31%, respectively.

Finally, research has shown that wood ear mushrooms have antioxidant properties and antimicrobial activity against Staphylococcus aureus and Escherichia coli. They may also have some antiviral effects.

However, while the above findings are promising, further research is necessary to confirm whether they are reproducible in human studies.

Like all mushrooms, wood ears are highly nutritious. They are low-fat and low-calorie while being rich in protein and dietary fiber.

The mushroom’s precise nutritional value will depend upon the material they grew on. The following figures are a general guideline based on a serving size of one cup:

Therefore, these mushrooms make a fantastic addition to any diet. Next, we will explain how to find and prepare this healthy food.

Wood ears are relatively easy to identify and can be considered good “beginner’s mushrooms” for foragers. They fruit between May and November and grow on many different types of wood, especially elder.

As we mentioned earlier, the mushrooms’ appearance is somewhat like a human ear. However, they come in various shapes and sizes, ranging from approximately 1–6 inches. They are light to dark brown with a jelly-like texture and a slightly velvety surface.

Wood ears are relatively easy to identify. They are also widely available in Asian supermarkets and online.

There are not too many wood ear mushroom look-alikes. That said, it is possible to confuse them with some species of cup mushroom. The main difference is that cup mushrooms grow facing upward while wood ears always face down. Cup mushrooms also tend to be more brittle than wood ears, which are rubbery and flexible.

The best way to get a conclusive identification is to take a spore print. Wood ear spores are white and appear sausage-shaped when viewed under a microscope.

If in any doubt, avoid harvesting wild wood ears and purchase them from a store instead. They are widely available in Asian supermarkets and online.

How to Eat Wood Ear Mushrooms

To prepare fresh wood ear mushrooms, simply clean them with a damp cloth and add them to your dish of choice. The whole mushrooms work well in recipes like hot and sour soup. It is also possible to slice them thinly and add them to stir-fries. 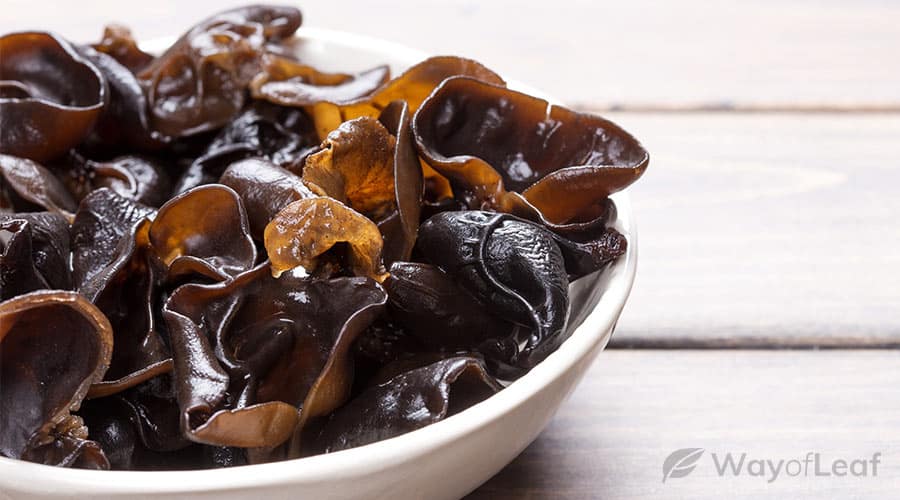 However, most store-bought wood ears are dried. Therefore, it is necessary to rehydrate them before use. Do this by soaking them in boiling water until they return to their natural state. Then use them in precisely the same way as the fresh mushrooms.

For anyone wondering, “can you eat wood ear mushrooms raw?” the answer is a resounding no. Raw wood ears can harbor harmful bacteria and other pathogens. Therefore, it is essential to cook them well before serving them.

Wood ear mushrooms taste relatively mild in comparison to other species like shiitake. In fact, people tend to eat them for their texture rather than their taste. They are satisfyingly crunchy on the outside while having a soft and chewy center.

Due to their neutral flavor, wood ears pair well with aromatic ingredients like soy sauce, rice vinegar, ginger, and garlic.

Wood ear mushrooms are a common fungal species that grows in many areas around the globe. They are highly nutritious and have several potential health benefits.

Although they are easy to recognize, it is essential to exercise caution when harvesting wild wood ears. Like all mushrooms, foragers should only pick them if they are 100% sure about their identification. Otherwise, purchase them online or from a physical store.

Want to learn more about exotic mushrooms and their benefits? Check out the articles below: