There are over 14,000 different varieties of mushrooms. Approximately 2,000 of these are edible, and 270 species have potential therapeutic properties.

Humans have used these mushrooms for thousands of years, and they are a common component of East Asian medicines. One of the best-known and most well-studied examples is Trametes versicolor, the turkey tail mushroom.

This article outlines the best-studied turkey tail mushroom benefits, how to use it, where to buy it, and possible side effects. Read on to learn more.

Trametes versicolor has several alternative names. Turkey tail is the most common and refers to the concentric brown and gray rings on the mushroom’s surface. In Chinese, it is known as yunzhi, meaning ‘cloud fungus,’ and in Japanese, it is kawaratake or ‘roof tile fungus.’ Both of these names describe the mushrooms’ appearance and growing habits. 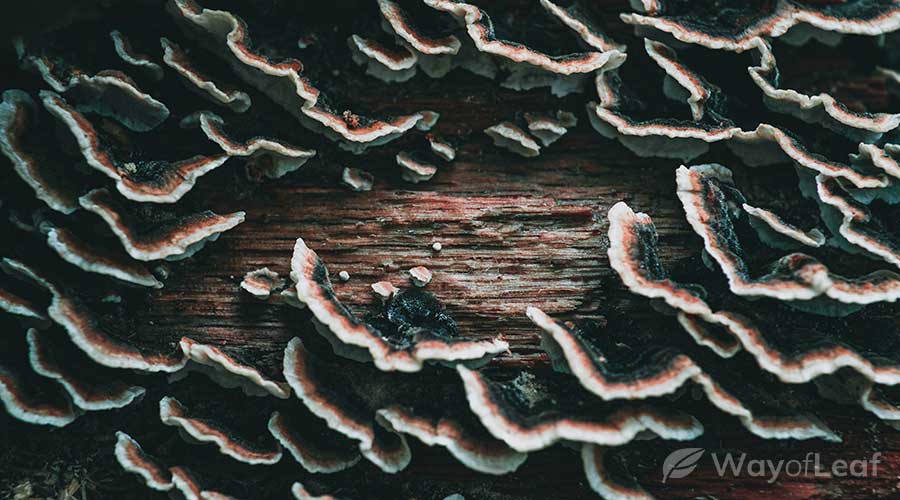 Turkey tails are a polypore fungus, meaning that their spores come from tiny pores on their surface rather than gills. They grow on dead and dying wood, acting as decomposers and playing a crucial role in forest ecosystems.

They are one of the most adaptable mushroom species on the planet, growing on many different types of wood. It is possible to find them in temperate, subtropical, and tropical regions, and they are in season for most of the year.

These mushrooms have a range of possible health benefits. Chinese medicine traditionally considers them to act upon the spleen, liver, and lungs to aid digestive and respiratory issues.

They are also said to improve endurance and longevity. Although these claims are mostly unproven, there are plenty of research-backed turkey tail benefits.

The mushrooms contain a variety of active substances. Like many other medicinal fungi, they are rich in polysaccharides, especially beta-glucan. They also contain two unique chemicals called polysaccharopeptide (PSP) and polysaccharide krestin (PSK). These compounds appear to have a range of benefits for human health, especially immunity.

Most human clinical trials have focused on the potential of these chemicals as an adjunct to chemotherapy and radiation therapy. PSP and PSK are routinely used for this purpose in China and Japan. However, animal studies have also highlighted the following as possible benefits:

As we mentioned, one of the main health benefits of turkey tail mushrooms is their ability to modulate immunity. They promote the generation and activation of several different types of immune cells. These include elements of the innate immune system that we are born with and the adaptive immune system that we develop over time.

Turkey tail mushrooms also activate something known as the reticuloendothelial system. This cellular system is responsible for clearing soluble substances from the bloodstream and tissues, including foreign particles and tumor cells.

Finally, these mushrooms can modulate cytokines, chemicals that play a crucial role in the inflammatory response. Inflammation is a highly complex process. It is essential for keeping the immune system functioning correctly, with either too much or too little leading to problems. The polysaccharides in turkey tails appear to upregulate some cytokines but not others, helping to maintain a state of balance.

The mechanisms behind turkey tails’ other benefits are less clear due to insufficient research on the subject. We hope to see more evidence relating to them emerging soon.

In general, turkey tail mushrooms are considered safe for human consumption, although there are a few potential side effects.

For instance, research has found that patients undergoing chemotherapy who consumed turkey tail experienced a loss of appetite, along with nausea and vomiting. However, whether these issues were due to the mushrooms or the chemotherapy is unclear. In fact, one 2017 review found that PSK reduced the incidence of chemotherapy side effects, including nausea, vomiting, and leukopenia.

Individuals with mushroom or mold allergies should avoid using turkey tail since it is a fungus. Also, the high fiber content of turkey tail could result in digestive issues in some people. Overall, it is worth consulting a doctor to try and determine if the possible turkey tail benefits outweigh the potential adverse effects.

How to Use Turkey Tail Mushroom

There are plenty of turkey tail uses and methods of consumption. We outline three of the most common methods a little later on.

However, it is important to purchase these mushrooms from a reputable seller rather than attempting to consume wild versions. It is possible that the soil or area surrounding wild turkey tail could be contaminated.

Also, unless you’re a mushroom expert, there’s a possibility of misidentifying the mushrooms. Although there are no poisonous turkey tail look-alikes, there are many similar fungi whose medical uses have not been studied.

Although clinical evidence doesn’t support any specific dosage, studies outline the doses given to volunteers. For instance, a review of studies published in 2012 found that cancer patients who used between 1 and 3.6 grams of the mushroom each day along with conventional treatment had a “9% absolute reduction in 5-year mortality.”

It’s recommended to start with a relatively small amount, and increase the dosage once you’re confident that there are no side effects.

There are several different options for taking turkey tail mushroom supplements. Some of the most common include teas, powders, and capsules. We will look at some of the pros and cons of each of these methods below.

The most traditional way of using these mushrooms is by brewing them into tea. It is possible to do this using whole fresh or dry fungus.

However, because the mushrooms are relatively dense, it is not merely a case of pouring over hot water. It takes a little more time to extract all of the beneficial compounds. In Asia, dried medicinal mushrooms are usually made into a tea-like liquid known as a decoction. The process is as follows:

Because making a decoction is a time-consuming process, it is common practice to make enough for a couple of days and store it in the refrigerator. Individuals can then warm each portion when it is time to drink it.

Not everyone will enjoy the earthy flavor of turkey tail tea. Therefore, some people choose to add extra herbs and spices, or a teabag, to improve the taste. However, bear in mind that any additions could alter the properties of the tea. Therefore, it is advisable to consult a qualified herbalist who can prescribe an appropriate blend.

Turkey tail powder offers a more convenient way to consume the mushrooms. It is possible to mix this product into recipes, such as smoothies, soups, or sauces. Follow the guidelines on the packaging that should explain how much to use each day.

One significant difference between powder and tea is that while tea generally uses the mushroom fruiting bodies, the powder may include the mycelium. This is the part of a fungus that grows underground or inside rotting wood.

The inclusion of the mycelium may alter the turkey tails’ properties slightly. For example, research suggests the fruiting body contains more beta-glucan, but the mycelium contains a broader range of compounds overall.

Finally, turkey tail capsules are perhaps the easiest consumption method. They are powdered turkey tails enclosed in a capsule shell. It is possible to swallow the capsules with water, taking much of the hassle out of dosing. 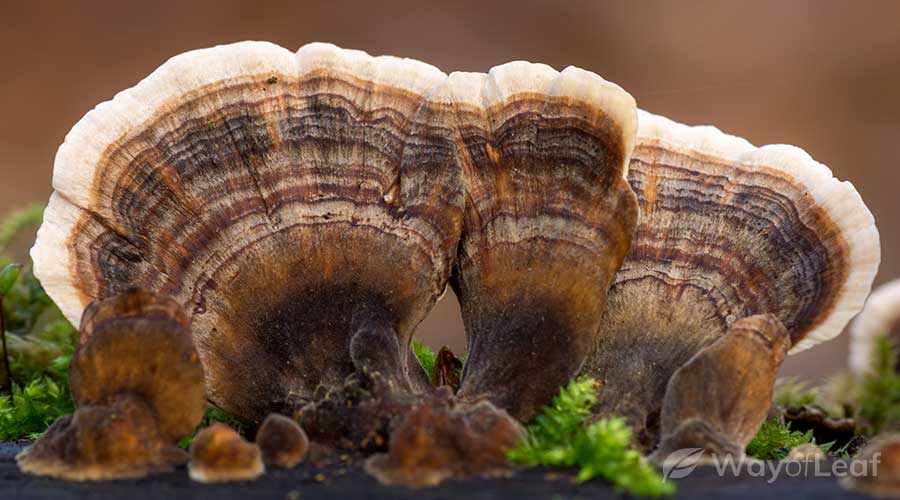 The primary downside is that capsules may be more expensive than whole mushrooms or powder. They may also contain gelatin, making them unsuitable for vegetarians and vegans. An alternative to pre-made capsules is buying empty casings and filling them with powder at home.

There are countless online brands offering turkey tail, but they are not all created equally. When looking for a reputable seller, please ensure they provide details on where they source their turkey tail. Top-rated brands tend to use mushrooms cultivated in an environment where experts have total control over growing conditions.

Also, don’t buy turkey tail from any brand that cannot provide up-to-date third-party lab reports. For the record, here are three highly-rated companies in the industry:

VidaCap keeps things simple by offering 60 capsules with 750mg of premium quality turkey tail extract apiece. If you prefer powdered extract, FreshCap has you covered with 60 grams of turkey tail in each tub.

Those who want to purchase their turkey tail in bulk should visit Om Mushrooms, as the brand sells up to 500 grams of it per container.

Turkey tail mushrooms are becoming increasingly well-known for their potential health benefits. East Asian medical traditions have recognized their usefulness for centuries, and they are now becoming more popular in the West.

One of the most famous turkey tail benefits is its ability to modulate the immune system. These mushrooms could also have other positive effects, although these are still under investigation. Anyone wishing to try turkey tails for a specific health condition should consult a physician or herbalist for further advice.

Could turkey tail mushrooms benefit your four-legged friends? Learn all about turkey tails for dogs in the article below:

Benefits, side effects, and mo…