Although the average American consumes 2.2 pounds of mushrooms each year, not everyone understands where they come from. For example, did you know that mushrooms are actually the reproductive organs of a much larger organism?

The bulk of a fungus is an extensive network known as the mycelium. It is a mass of fine, interwoven strands called hyphae. The mycelium tends to remain hidden underground or inside rotting wood or trees, explaining why many people are unaware of its existence. It breaks down organic matter and absorbs nutrients from its surroundings, playing a vital role in the ecosystem.

The fungus spends most of its life cycle in this state and only forms mushrooms under specific conditions. Their role is to produce and release spores, the fungal equivalent to seeds. Therefore, many people compare mycelium to a tree and mushrooms to its fruit. In fact, mushrooms are sometimes known as “fruiting bodies.”

This article explains the life cycle of mushrooms and provides a fascinating insight into how fungi reproduce and grow. Anyone interested in mycology will find it a worthwhile subject, especially individuals hoping to grow their own. So, without further ado, let’s get up close and personal with mushrooms.

The Life Cycle of Mushrooms: Sexual and Asexual Reproduction

The mushroom life cycle varies slightly from species to species. However, most varieties follow a somewhat similar pattern which we will describe below.

This article will focus on Basidiomycetes, a class of fungi that includes gilled mushrooms, polypores, puffballs, boletes, and more. Please note that the process differs slightly for Ascomycetes such as cup fungi and morels. 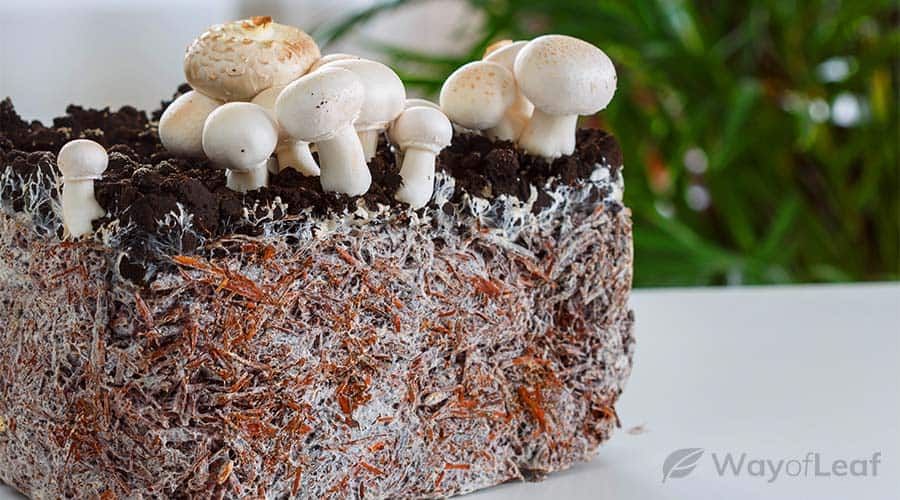 Microscopic fungi like yeasts also have very different life cycles and reproduce asexually by “budding” rather than mating. Some Ascomycetes, including cordyceps, can also reproduce without a mate. However, many fungi rely upon sexual reproduction and require a partner.

Unlike animals, which require a male and female partner, fungi are hermaphroditic, playing both mother and father to their offspring. To fully understand this process, it is necessary to look more closely at the various stages of mycelial growth.

Mycelium can grow to incredible sizes, sometimes covering thousands of acres of land. However, it starts its life as a tiny spore, invisible to the naked eye. Below we will explore how this spore develops and grows, eventually producing mushrooms and beginning the life cycle again.

When a mushroom releases its spores, they must find a suitable environment in which to grow. In nature, they are usually transported by the wind or on an animal’s fur. Inoculation occurs when a spore lands on a surface that provides it with favorable growing conditions.

Spores can lie dormant for long periods and survive extreme weather conditions. However, once the conditions become conducive to growth, spore germination occurs. Numerous factors can influence germination, including temperature and availability of water and nutrients.

Once a spore germinates, it absorbs water through its cell wall and becomes activated. It grows into a spherical structure and begins to develop a hypha.

Like animals, fungi produce pheromones to help them attract a suitable partner.

As we mentioned earlier, hyphae are long, strand-like structures that come together to form mycelium. They are strings of elongated cells that stretch out through their habitat as they grow.

Each hyphal cell contains a haploid nucleus with half a set of genetic material. At this stage, it is known as monokaryotic mycelium and cannot produce mushrooms without a mate. Like animals, fungi produce pheromones to help them attract a suitable partner.

When two compatible hyphae meet, they can donate or receive their haploid nucleus. Donating a nucleus is considered a male function while receiving one is considered female. After this fusion of hyphae, the two nuclei exist side by side in the cell as the mycelium expands.

The hyphal cells now contain a complete set of genetic material, although the nuclei remain separate. At this stage, the mycelium is classified as dikaryotic, and it spends most of its life cycle in this state.

All about this fabulous fungus…

Growing mycelium appears as a mass of white material in the soil or wood. Sometimes it is possible to see the individual hyphae stretching out like roots. It spreads rapidly throughout its habitat, absorbing nutrients and storing the energy needed to produce mushrooms.

Mycelium often forms symbiotic relationships with plants, helping them absorb nutrients and water from the soil. In return, the plant provides the fungus with carbon as an energy source.

Other fungi obtain nutrients by decomposing organic matter, such as dead trees and animals, leaf litter, or dung. Therefore, mycelium has an essential role within the ecosystem, improving soil health, water dynamics, nutrient cycling, and more.

Once the mycelium has stored sufficient energy and the conditions are favorable, it begins to fruit (produce mushrooms). Several factors trigger fruiting, including nutrient availability, humidity, temperature, and light changes.

The first stage is the formation of hyphal knots. Smaller hyphae begin to grow alongside larger ones and fill in any spaces, forming a thick, cord-like structure.

Next, the hyphal knots develop into primordia, the undeveloped structures that will go on to become mushrooms. 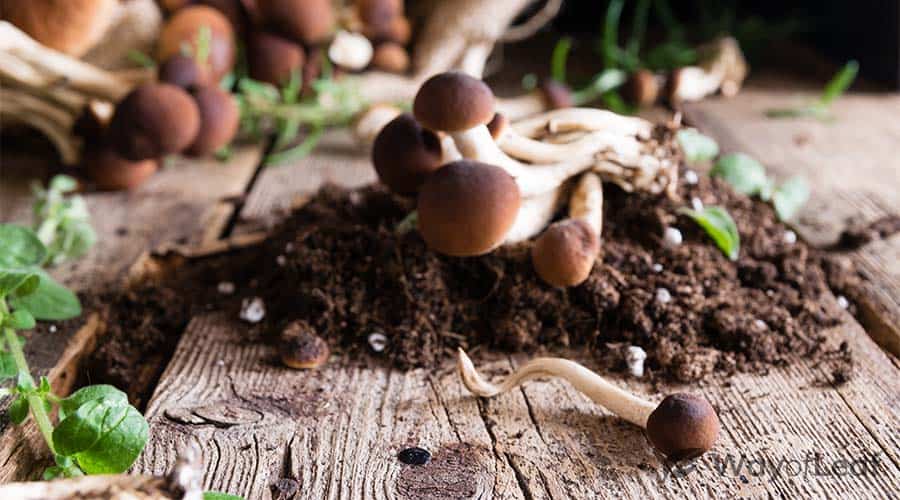 There are several stages of primordia formation. They begin as fluffy, undifferentiated tufts that look somewhat like cotton wool. Then, they become smooth, although they remain undifferentiated, appearing as small white bumps.

Eventually, they elongate and develop a “waist,” differentiating the mushroom’s cap from its stalk. This final stage is known as pinning and is when the different parts of the mushroom’s anatomy first become visible.

Not all primordia go on to form mushrooms. The fungus selects the most viable candidates and focuses all of its energy on them. Less promising primordia may develop later as part of a second or third flush.

A mushroom will progress through several stages as it matures. The precise process varies slightly depending on the species.

The following stages apply to Agaricus bisporus, the common white mushroom. They will be somewhat similar for most gilled mushrooms, although polypores, boletes, and puffballs differ significantly.

The stages of A. bisporus development include:

During the button and closed cup stages, the mushroom’s gills are covered by a membrane known as the veil or velum.

Then as the mushroom grows, the veil stretches and breaks, revealing the gills. The mushrooms’ cap remains convex at the cup stage, with the gills tucked neatly underneath.

Finally, as the mushroom matures further, it flattens out, eventually becoming convex and revealing its gills. When growing mushrooms, it is usually considered optimal to harvest them before they reach this stage.

The gills contain structures called basidia, which is the part of a mushroom where spores develop and mature. Inside these basidia, each cell’s two haploid nuclei fuse to form a diploid nucleus containing a complete set of genetic material.

Each spore contains a combination of its parents’ genetic material and enough nutrients to support germination.

These nuclei then undergo meiosis, a type of cell division that results in four haploid spores. Each spore contains a combination of its parents’ genetic material and enough nutrients to support germination.

As the mushroom flattens out and reveals its gills, the basidia release the spores, and the mushroom life cycle begins again. A single mushroom can produce billions of spores, ensuring that it passes on its genetics for many years to come.

The life cycle of mushrooms is complex and intriguing. From microscopic spores to magnificent fruiting bodies, it is a process that is well worth observing.

We recommend cultivating a gourmet or medicinal species to witness the growth of beautiful fungi in the comfort of your own home. Check out our beginner’s guide to growing mushrooms to learn more.