Medicinal mushrooms have been used to promote better health for thousands of years. Mushroom varieties, like turkey tail mushrooms and even psilocybin mushrooms, are well-known for their incredible health-promoting benefits.

The maitake mushroom is no different. Not only is it full of nutrients and tastes delicious (especially when combined with a good soy sauce!), but it also boasts some amazing wellness properties.

The Latin name for maitake mushrooms is Grifola frondosa, but this fungus is also known by several other names – including hen of the woods, the signorina mushroom, kumotake (cloud mushroom), and more.

Grifola frondosa is native to the mountain forests of Northeastern Japan, where it gained its name “Phantom mushroom” due to its rare presence. However, the fungus can be grown in controlled settings worldwide.

What Are Maitake Mushrooms?

Maitake is a type of edible mushroom from East Asia, which is now cultivated worldwide for its medicinal and nutritional values. People use it to support immunity, stress response, and liver function, while modern medicine suggests it has exciting anti-cancer potential.

“Maitake” originates from Japanese and means dancing mushroom. It was first discovered more than 2,000 years ago by Buddhist nuns and woodcutters in Japan. Elated by this unique mushroom’s sight, taste, and medicinal properties, they danced around with happiness – hence the name. 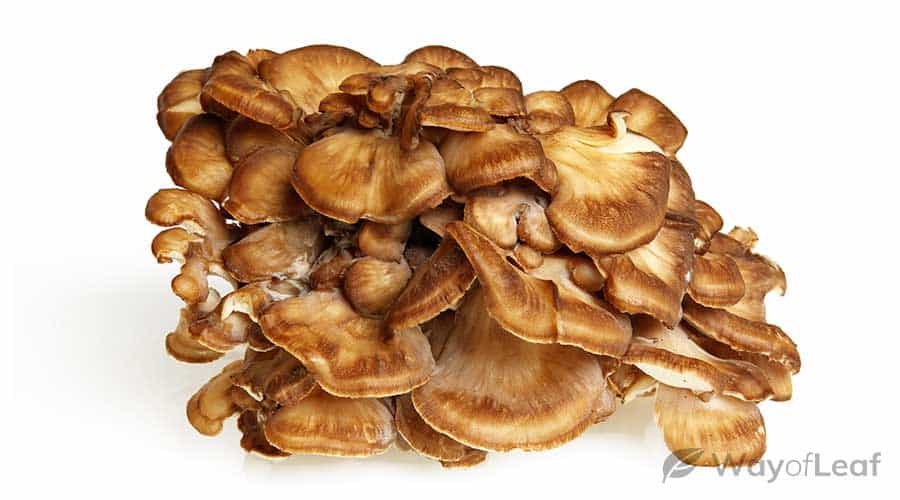 The maitake mushroom is a kind of adaptogen. Adaptogens are non-toxic plants that help the body fight against any physical or mental difficulty. They may also help to regulate bodily systems that have become unbalanced. While people use maitake in recipes for flavor alone, many consider it to be a medicinal mushroom.

In the wild, hen of the woods mushrooms are commonly found in clusters at the base of oak, elm, or maple trees and can grow to over 100 pounds, gaining them the coveted title “king of the mushrooms.” They have a unique, frilly appearance, delicate texture, and an earthy flavor that works well in several dishes, like burgers, stir-fries, and more.

What Are the Maitake Mushroom Benefits?

This frilly, feathered mushroom is often consumed as a food in Asia, and the extract is available in dietary supplement form. People there also use it to make medicine. Although the maitake mushroom has been used in China and Japan for thousands of years, it’s only garnered popularity in the U.S. over the last twenty years. People are praising this supplement for its promises of vitality, health, and longevity.

The maitake benefits are quite extensive, especially when compared to many other mushrooms. They’re rich in antioxidants, vitamins B and C, fiber, potassium, amino acids, and minerals. Additionally, they’re also fat-free, low-calorie, low-sodium, and cholesterol-free.

Maitake mushrooms are often said to boost the immune system and subsequently fight certain infections. Here is a closer look at some of the health properties of maitake.

When people consume Grifola frondosa as part of a healthy, well-rounded diet, it may help to stabilize glucose levels in the blood.

One animal study done in Japan, for example, showed that administering maitake mushrooms to rats with diabetes improved glucose tolerance after injection.

Research suggests that maitake may be the most effective immune-supportive mushroom of all. Immune system health is essential to overall health because it acts as a natural defense system for the body and helps fight off foreign invaders, thereby protecting the body against infection and injury.

Related article
Does CBD Have an Effect on Your Immune System?

Maitake mushrooms are one of nature’s most potent sources of beta-glucan polysaccharides, also referred to as “biological response modifiers” because of their ability to activate the immune system. A study found that natural immunomodulating glucans from Grifola frondosa “strongly stimulated both the cellular and humoral branch of immune reactions.”

In laboratory research, scientists have discovered that maitake extracts could slow the growth of certain tumors. By stimulating activity in immune cells, some believe that maitake may help inhibit the growth of cancer cells. A 2018 study found that a component of beta-glucan (called the D-fraction) could have anti-tumor activity.

Related article
Maitake Recipes: Which Dishes Can You Make?

However, scientists have yet to prove that maitake has any cancer-fighting effects in controlled clinical trials.

5. Could Help the Body Combat Stress

Since these mushrooms are adaptogenic, they could help the body fight off stress more effectively. However, it’s important to note that the jury is still out on adaptogens. The research so far is limited, and its efficacy on human health is unclear.

If you want to consume maitake mushrooms regularly for their benefits but aren’t keen on the taste, there are several maitake supplement options. Just bear in mind that the Food and Drug Administration (FDA) does not regulate supplements. Therefore, if you opt for a maitake supplement – like any of the ones listed below – it’s essential to do your research first. 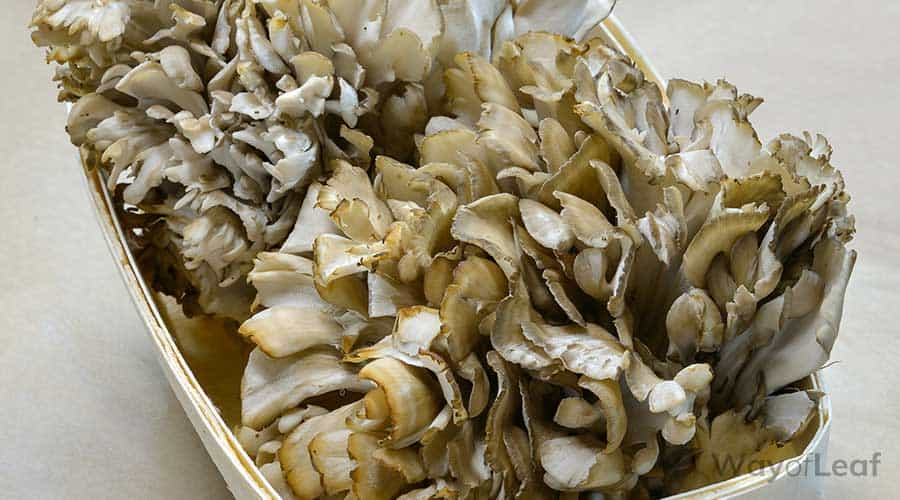 Maitake mushrooms are typically used in Japanese cuisine because they go well with other foods, but they are also an excellent option for mushroom tea. They have a sweet taste that is fruity and spicy and earth and nutty, of course.

For fast absorption, people can add maitake powder directly into hot tea, coffee, or their favorite nut milk. It can also make for a great addition to morning smoothies, raw desserts, baked goods, and more.

If you’re not a fan of the maitake flavor, then capsules may be the best option. Pure maitake capsules offer an easy and convenient way to add this powerful medicinal mushroom to your daily nutritional intake.

So far, maitake mushrooms have demonstrated enormous potential in the world of health and wellness. Although there are no guarantees, the possibilities are very promising. Maitake mushroom benefits are impressive due to their perceived ability to boost the immune system, lower cholesterol, and combat stress.

Maitake mushrooms are a great source of nutrition and can support the body in numerous ways.

Additionally, maitake mushrooms are a great source of nutrition, making them very valuable for overall health. Generally speaking, consuming maitake every day could be considered a bit of a health boost for the entire body since every system and organ needs various nutrients to function optimally.

And of course, let’s not forget that maitake mushrooms have been used for literally thousands of years as both a delicious food and a medicine.

Maitake isn’t the only mushroom with amazing medicinal properties. Learn more in the articles below: