Mushrooms are well-known for their nutritional value. They are low-calorie, low-fat, and low-salt while being a valuable source of vitamin B, vitamin D, and several essential minerals.

Recent research has also shown that mushrooms could have additional therapeutic properties, supporting immunity, gut health, and more. This makes them an excellent addition to a healthy and balanced diet.

However, some people may be concerned about carbohydrates in mushrooms, especially individuals following low-carb diets.

Mushrooms’ unique carbohydrate content may contribute significantly to many of their health benefits.

The good news is that, although they do contain carbohydrates, mushrooms are not considered a starchy food. Therefore, they do not have the same impact as carbohydrate-rich grains, potatoes, or beans. In fact, mushrooms’ carbohydrate content may contribute significantly to many of their health benefits.

This article explains all about mushrooms and carbs, including the carb count of five common varieties. Read on for our in-depth guide.

Do Mushrooms Have Carbs?

Mushrooms have a significant water content, often in the region of 90% or more. The remaining portion comprises protein, carbohydrates, traces of fat, vitamins and minerals, and other beneficial micronutrients.

So, the simple answer is yes; mushrooms do contain carbs. However, it is essential to understand that not all carbohydrates are the same. 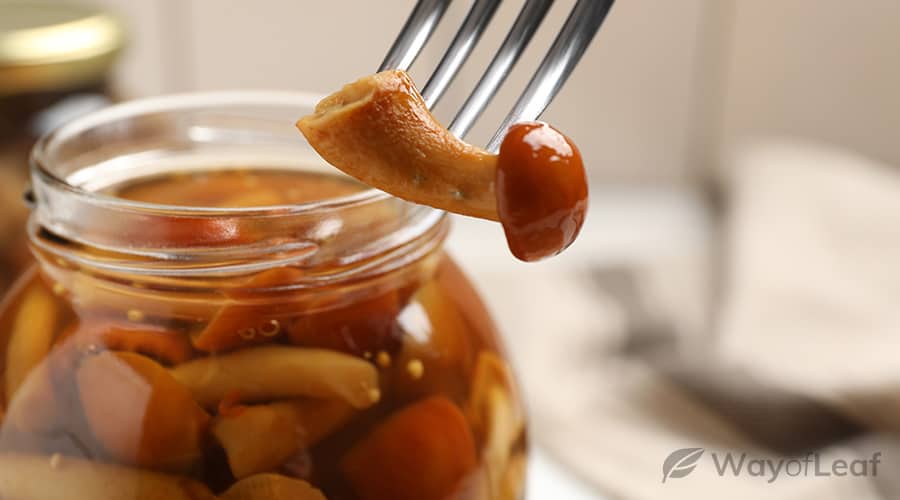 The word ‘carbohydrate’ can be used to describe any of a vast group of organic molecules that consist of carbon, hydrogen, and oxygen. They can be further subdivided into sugars, starches, and dietary fibers.

Sugars are simple carbohydrates such as glucose and fructose. The body readily absorbs these molecules and rapidly converts them into energy. This is why consuming high-sugar foods often results in an energy peak, followed by a crash.

Starches are more complex carbohydrates consisting of multiple glucose molecules bound together. Therefore, the body absorbs them more slowly than it does with sugars, providing a steadier release of energy.

Finally, dietary fibers are large carbohydrate molecules that the body cannot digest. They pass through the intestines relatively unchanged and have a range of potential benefits.

Firstly, they have prebiotic effects, acting as fuel for the helpful microorganisms that inhabit the gut. They also aid digestion by absorbing water to soften the stools and prevent constipation. Dietary fiber also plays a role in maintaining a healthy body weight and decreasing the risk of chronic disease.

Most of the carbs in mushrooms fall into the dietary fiber category. They include compounds such as chitin and beta-glucan polysaccharides, which are associated with improved gut health, heart health, immunity, and more.

Research on Carbohydrates in Mushrooms

Although there are carbohydrates in mushrooms, consuming them does not seem to alter one’s overall carb intake significantly.

A 2021 study found that adding an 84g serving of mushrooms to a standard diet did not increase energy, carbohydrate, fat, or sodium consumption. Furthermore, individuals who ate mushrooms regularly had higher intakes of dietary fiber and several vital micronutrients, including:

Related article
Edible Mushrooms: 8 of the Tastiest and Healthiest Options

Other research has shown that different preparation methods can significantly alter mushrooms’ carbs, protein, and fat content. It can also affect the concentration of beneficial phenolic compounds.

The study’s authors concluded that frying mushrooms was the most effective way to prepare them. Although it increased the carbohydrate content slightly, it also retained the most phenolic compounds. Microwaving was the second-best method and tended to increase protein content, while boiling was less recommended.

How Many Carbs in Mushrooms?

The precise amount of carbohydrates in mushrooms varies depending on the variety. Below is the carb content of five of the most common types of mushrooms:

As you can see, white mushrooms have the lowest carb count by far. However, this does not necessarily mean they are a healthier choice. In fact, because most mushrooms’ carbohydrates exist as dietary fiber, those containing larger amounts could be more beneficial.

Carbs in Mushrooms and the Keto Diet

One group of people who will be particularly concerned about mushrooms’ carbohydrate content is those following low-carb diets.

One example is the ketogenic diet, also known as the keto diet. This eating plan involves reducing one’s carbohydrate intake significantly to approximately 5–10% of the daily caloric intake. This figure equates to around 20–50g of carbs per 2000kcal. 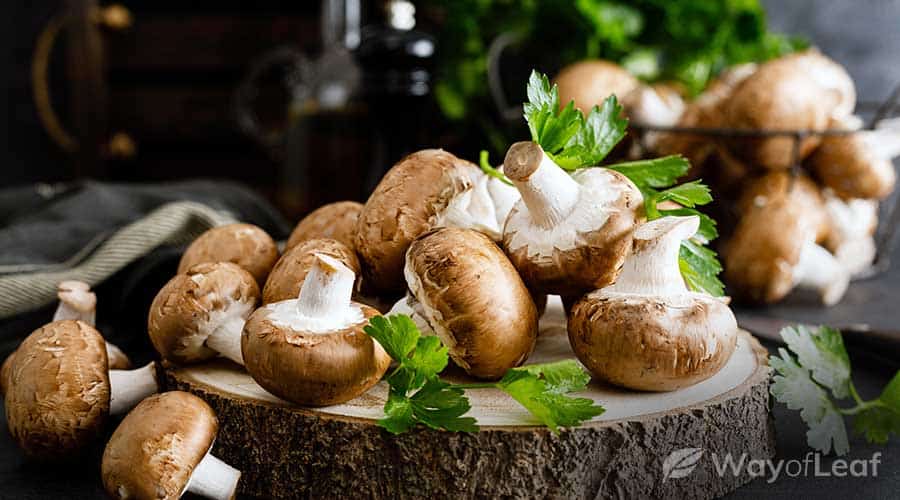 Unlike other low-carb diets, which often involve a high protein intake, the keto diet focuses on fats.

Minimizing carbohydrates and keeping protein levels moderate forces the body to use an alternative fuel source known as ketones. These are chemicals that the liver produces by breaking down fat reserves.

Proponents of the diet claim it has several benefits, including rapid weight loss, increased insulin sensitivity, and reduced blood pressure.

However, it can also cause some unpleasant side effects, including nausea, headaches, fatigue, dizziness, and constipation. Furthermore, it is not suitable for everyone, and the long-term impact of following such a radical diet is unknown.

Some of the many foods that people following the keto diet must avoid are those containing sugars and starches. Examples include grains, potatoes, beans, certain vegetables, and most fruit.

Fortunately, mushrooms are classified as a non-starchy vegetable and are, therefore, fine to consume.

Moreover, since mushrooms’ carbs are mainly in the form of dietary fiber, they could help counteract keto diet side effects like constipation. Therefore, it is widely accepted that mushrooms are among the most keto-friendly foods.

Carbs In Mushrooms: The Bottom Line

There is a lot of confusion surrounding mushrooms and carbs. On the one hand, they are a rich source of dietary fiber, a form of carbohydrate. However, they are not sugary or starchy, meaning they do not affect blood sugar or bodyweight like other high-carb foods can.

Mushrooms are also low-fat and low-calorie while being packed with essential minerals and vitamins.

Indeed, the carbohydrates in mushrooms may improve metabolic health and help us maintain a healthy body weight. Compounds like chitin and beta-glucan polysaccharides could have numerous other benefits too.

Mushrooms are also low-fat and low-calorie while being packed with essential minerals and vitamins. Therefore, they are a valuable component of any healthy diet, even for people who are counting carbs and calories.

Are you looking for new and exciting ways to incorporate more mushrooms into your daily diet? Check out our recipes below:

8 min read
Join the discussion
TOC
Premium
Your subscription has ended
If you love cannabis and want to support our site, join WayofLeaf Premium today and unlock
Best of all, part of your membership fee will go towards supporting the fight to legalize cannabis.
Sign Up for WoL Premium
Not now
I already have an account
×
Log in to Your Premium Account