Enoki is an edible fungus that is especially popular in East Asian cuisine. Many people love the unique flavor and texture that these mushrooms can add to a dish. Better still, they are nutritionally dense and have a range of potential health benefits.

Read on for our complete guide to enoki mushrooms, their therapeutic uses, and how to prepare them.

Enoki, or enokitake, is the common name for the fungal species Flammulina velutipes. It is also known as winter mushroom, golden needle, velvet foot, or velvet shank.

These alternative names aptly describe the mushrooms’ growth habits and appearance. They fruit during the coldest months between October and May and have a long, velvety stipe (stalk) when mature. They are widespread across North America, Europe, and Asia and tend to grow on hardwood logs or trees. 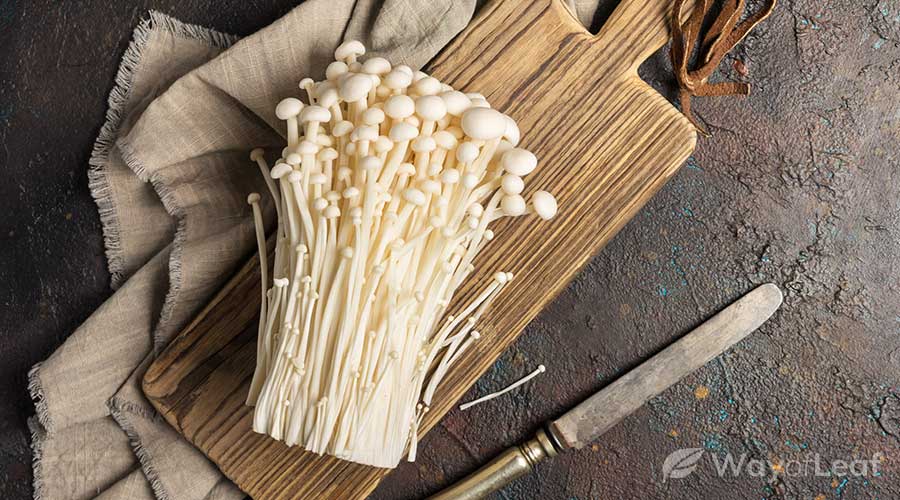 Enoki is among the most popular and widely cultivated mushroom species worldwide. They are especially prevalent in Japanese and Chinese cuisine, where they are prized for their texture and taste. They also have an exceptional nutritional profile, being high in protein and fiber while low in calories and fat.

Interestingly, enoki was one of the first mushrooms to travel to space. In 1993, NASA sent samples into orbit on board the space shuttle to test how they reacted to zero gravity. And scientific interest in enoki does not end there.

In recent years, researchers have been investigating enoki mushrooms’ biological activity and potential health benefits. In the next section, we discuss some of their most important findings to date.

According to a 2016 review, studies have demonstrated the following enokitake mushroom benefits:

Unfortunately, most of the existing research involves isolated cell lines or animals rather than humans. Therefore, large-scale clinical trials are necessary to confirm whether these benefits translate.

That said, enoki mushrooms contain a wealth of biologically active compounds, meaning they are likely to have some effect.

One of the best-researched areas is how enoki mushrooms influence cholesterol and fat metabolism.

The results showed that the animals receiving the highest dose had the lowest levels of total cholesterol (TC), triacylglycerol, and low-density lipoprotein cholesterol (LDL-C) after eight weeks.

The researchers attributed these results to the mushrooms’ high dietary fiber content, antioxidant compounds, and a chemical called mycosterol. Experts have linked the latter to reductions in blood pressure and blood sugar, as well as cholesterol.

A 2018 study had somewhat similar results. Researchers fed mice a high-fat diet and administered enoki mushroom chitosan to some of the animals. The results indicated that, after six weeks, the mice in the enoki groups gained less weight than their untreated counterparts.

Like most mushrooms, enoki are nutritional powerhouses. They are high-protein and contain a full range of essential amino acids as well as some non-essential ones. They also boast a generous dose of dietary fiber, which could be beneficial for digestive health.

However, enoki mushrooms’ fiber content could be problematic for some. It makes them tough and somewhat difficult to digest. In China, they are affectionately known as “see you tomorrow” due to their ability to pass through the gut whole. Therefore, it is essential to chew enoki well, especially for people with digestive issues such as IBS.

Individuals who are not put off by this quirk will find enoki an excellent addition to a healthy diet. Below is a summary of enoki mushrooms’ nutritional values per 100g:

They also contain many other nutritional compounds, including ergosterol, beta-glucan, B vitamins, and numerous essential minerals.

There are two primary enokitake types; wild and cultivated. Although they are the same species, the two varieties are practically unrecognizable as such. Here are the key differences between the two:

Wild enoki mushrooms typically grow on dead hardwood trees or logs. They are in season from late fall to spring. They tend to grow in clusters and have tan-colored caps with darker brown, velvety stipes.

One significant issue with harvesting wild enoki is that they look very similar to a poisonous mushroom, Galerina autumnalis. Furthermore, the two species often grow side-by-side, adding to the confusion.

It is essential only to harvest wild enoki (or any mushroom) if 100% sure about its identification.

It is essential only to harvest wild enoki (or any mushroom) if 100% sure about its identification. A much safer option is to purchase cultivated enoki, which are widely available in Asian grocery stores.

Cultivated enoki have a noticeably different appearance than wild specimens. They have long, white stipes and undeveloped white caps. The reason for this is that enoki cultivation happens in the dark. Therefore, the mushrooms grow long and thin as they stretch out, searching for light.

How to Eat Enoki Mushrooms

There are many different ways to enjoy enoki mushrooms.

As a staple of Asian cuisine, one of the most popular methods is stir-frying. However, it is also possible to steam enoki to serve with sauce or add them to savory pancakes, soup, or hot pot.

Before cooking, cut the bottom off the mushrooms and separate them into small clumps. Remove any dirt by wiping with a damp cloth or rinsing quickly under running water. 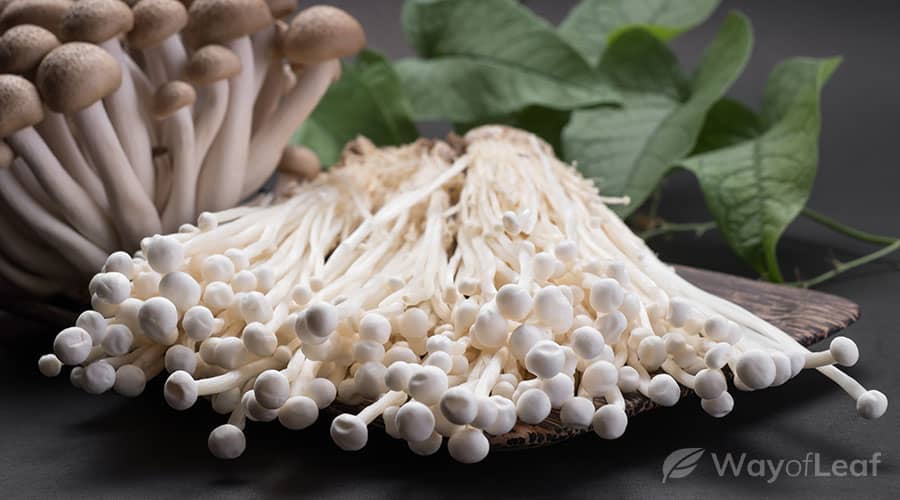 It is important not to overcook enoki as they can become overly chewy. However, anybody wondering, “can you eat enoki mushrooms raw?” should exercise caution. Raw enoki contain a chemical called flammutoxin, which could potentially cause some adverse effects.

Flammutoxin is not generally considered dangerous for oral consumption. But eating large amounts for several consecutive days may be harmful. The good news is that heating eliminates the chemical, making well-cooked enoki perfectly safe to consume.

Enoki mushrooms taste relatively mild in comparison to some other species. They do not possess the meatiness of shiitake or portobello mushrooms, for example. Therefore, they pair well with strong flavors like soy sauce, garlic, and chili.

They also have a satisfying chewy texture, which is why they are a popular addition to soups and sauces.

Enoki, or enokitake, are popular mushrooms in Asian cuisine. They have a unique taste and texture and a fantastic nutritional profile.

They may also provide additional benefits due to their range of biologically active compounds. For example, they appear to have a positive influence on cholesterol and fat metabolism. However, more studies are necessary to confirm how enoki could impact human health.

Have you tried enoki mushrooms? Do you have a favorite enoki recipe? Let us know in the comments below.