The term “puffballs” can refer to several different mushroom species that share some unusual features.

They all belong to a group known as Gasteromycetes, meaning “stomach fungi.” They take this name from their unique habit of forming spores inside their fruiting bodies rather than having gills. When these mushrooms ripen, they release a puff of spores, hence their common name.

This article explains all you need to know about these strange fungi, where they grow, and how to identify them. We will also discuss which ones are edible and how to avoid poisonous look-alikes.

The best-known puffball species are Lycoperdon perlatum (common puffball) and Calvatia gigantea (giant puffball). Several other related species are also classified as puffballs, as well as mushrooms in the genera Bovista. 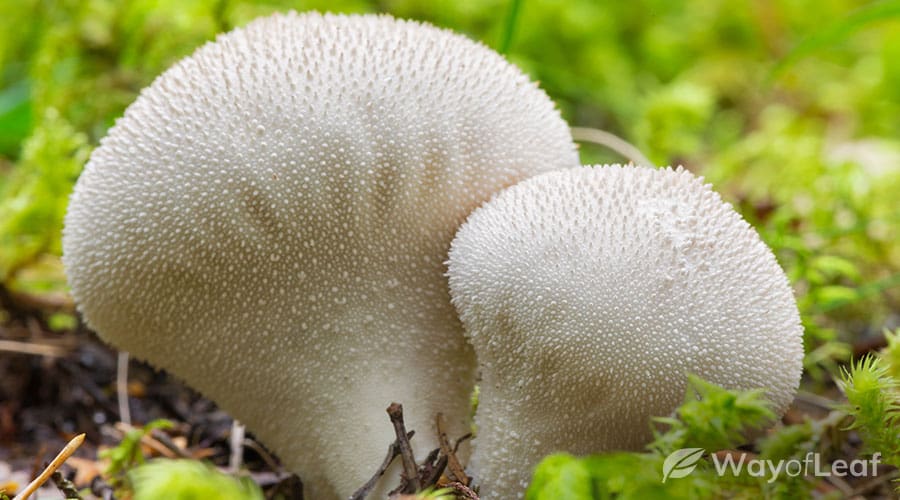 Although they belong to different families, these mushrooms share several common characteristics. They often tend to be white or off-white in color and have a ball-like shape. However, their most distinctive trait is the puffs of spores they release as they mature.

Let’s take a closer look at three types of puffballs and how to identify them.

According to mycologist Tom Volk, the name Lycoperdon comes from the Greek words lyco, meaning “wolf,” and perdon, meaning “to break wind.” Therefore, these strange-looking fungi are sometimes affectionately known as wolf-fart puffballs.

Another widespread member of the Lycoperdon family is L. pyriforme, commonly known as the pear-shaped puffball or stump puffball.

These mushrooms are round with a short stem and are covered in small, wart-like protrusions or spines. The mature mushrooms release their spores through an opening at the top of their fruiting body when touched.

С. gigantea (giant puffball) is by far the best known Calvatia species, although there are several others.

Giant puffballs are easily recognizable by their impressive size, sometimes growing as large as a watermelon.

They are easily recognizable by their impressive size, sometimes growing as large as a watermelon. This feature means that the fruiting bodies are easy to spot from afar, and they have become a favorite among mushroom hunters.

They have a smooth, white surface and can be either round or football-shaped. As the mushrooms mature, they become darker, sometimes turning olive-brown. Eventually, they crack open, releasing their spores into the air.

Bovista species are sometimes known as true puffballs or tumbling puffballs. The latter name stems from the fact that they break away from the earth when they mature, blowing across the ground to disperse their spores.

There are many different types of Bovista. Some are white and resemble young giant puffballs, while others are gray or brown. Many develop a mottled or cracked appearance as they age before bursting open to release their spores.

These mushrooms should not be confused with Scleroderma bovista, also known as the potato earthball. Although their name and appearance are similar, they are not puffballs and are poisonous when consumed.

Several poisonous mushroom species can look similar to puffballs. The best way to avoid puffball mushroom poisonous look-alikes is by cutting the fungi in half, top to bottom.

If the mushroom is solid white with thin skin, it is most likely a young puffball. A mushroom with a brown center and thin skin could be an older puffball whose spores are already mature.

All about this fabulous fungus…

If the fungus looks like a puffball but has a dark center with thick skin, it is probably an earthball. And if it has a mushroom-shaped outline on the inside, it is likely an undeveloped Amanita. These puffball look-alikes can be deadly poisonous and should be thrown away.

When harvesting puffballs as food, it is crucial to check every single mushroom in this way before cooking. It is also essential to avoid breathing in spores from older fruiting bodies as inhaling a large number can be harmful.

Where Do Puffball Mushrooms Grow?

Puffball mushrooms grow in various places depending on the species.

Common and pear-shaped puffballs mushrooms tend to grow in wooded areas, either on the ground or rotting logs or tree stumps.

On the other hand, giant puffballs tend to favor more open areas, such as grassland or the edges of forests. They sometimes appear in parks, gardens, or even alongside roads.

Unfortunately, growing puffball mushrooms at home is challenging as they require particular conditions to thrive. Therefore, would-be cultivators should opt for another easy-to-grow species, such as oyster mushrooms.

Puffball mushrooms are edible but only when they are young. Some have a mild flavor that people compare to shrimp, while others are quite bland. As they mature and fill with spores, they become unpleasant to eat.

The easiest way to prepare them is to slice them into evenly-sized pieces and fry them in butter. Giant puffball slices are also delicious dipped first in beaten egg, then in breadcrumbs, and deep-fried. 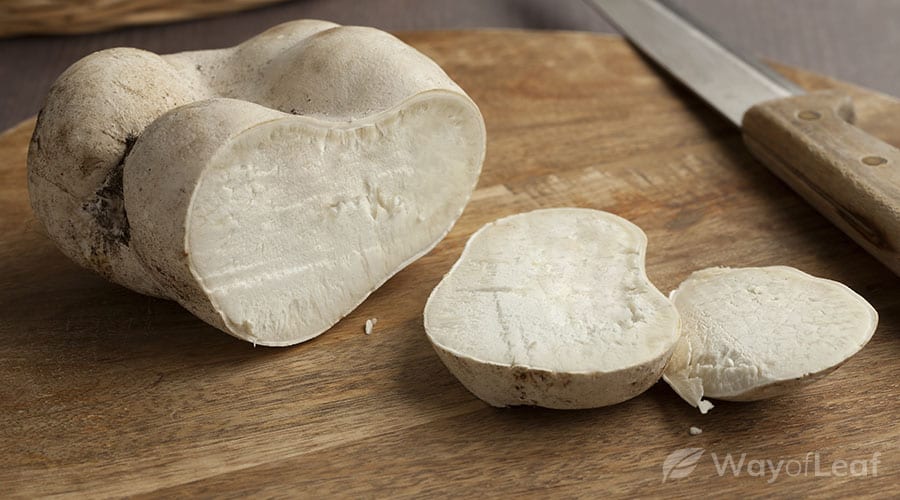 Because of their size, giant puffballs can feed several people. However, they do not keep well and should be ideally consumed within 24 hours of harvesting.

Another issue to note is that puffballs can absorb contaminants from their habitat. For example, some specimens have been found to have dangerously high mercury levels.

Therefore, it is unwise to harvest these mushrooms from polluted areas such as roadsides or places where chemical pesticides may have been used.

Like all mushrooms, puffballs are highly nutritious. They contain a range of essential and non-essential amino acids and have one of the highest protein contents of any fungi.

In addition to their generous protein content, there are many other potential health benefits to eating puffballs. It seems that several varieties could have therapeutic applications, although much of the current research has focused on C. gigantea.

Puffball mushrooms have several traditional uses in both Native American and Chinese medicine.

This mushroom has several traditional uses. For example, the Lakota Native American tribe used dried puffball spores to pack wounds. They reportedly stopped bleeding, promoted blood clotting, and prevented infections. It has also been promoted in traditional Chinese medicine to remedy coughs and loss of voice, but there is little clinical evidence supporting these uses.

However, research has shown that these fungi potentially have anti-inflammatory and anti-diabetic properties. They also contain a compound called calvacin that has possible anticancer activity.

Further study is necessary to determine precisely how these fungi could benefit human health. However, scientific interest in medicinal mushrooms is increasing rapidly. Therefore, we may see more evidence emerging soon.

Puffball mushrooms include members of the Lycoperdon, Calvatia, and Bovista families. These fungi are not closely related, but they do share several key features. For example, they have a ball-like appearance and release puffs of spores when mature, giving them their common name.

Many puffballs are edible when young, and they may have some health benefits too. However, foragers must exercise caution to avoid poisonous look-alikes such as earthballs and young Amanita specimens.

If in doubt about a mushroom’s identification, do not consume it and stick with known edible species instead.

Learn more about wild, edible mushrooms by following the link below: