What Is Essential Tremor – And Can CBD Oil Help?

Essential tremor, sometimes referred to as ET, is a condition that affects around 7 million Americans and millions more the world over. ET affects up to 1% of the general population, and up to 5% of people aged over 65.

Despite how common ET is, there is yet to be any cure, and there are currently very few treatment options available.

Some have proposed that CBD oil could offer potential relief to those suffering from essential tremor. This article will explore this possibility in-depth.

What Is an Essential Tremor?

Essential tremor is a nervous system (neurological) disorder. It is characterized by involuntary and rhythmic shaking, which can occur in any part of the body. It most commonly occurs in the hands when performing simple tasks like drinking from a glass or tying shoelaces.

The tremors are similar to Parkinson’s disease symptoms, which often leads to ET being confused with Parkinson’s. Some of the key differences between the two conditions are:

With ET, the tremors usually occur when the affected person is using their hands. However, with Parkinson’s disease, these tremors or shakes arise when they are inactive. Parkinson’s hand tremors are most prominent when they are by the person’s side or resting on their lap.

Some people with ET develop ataxia, which means that they no longer have full control over their bodily movements. As a result, people with ataxia often have an unsteady gait.

ET mainly affects the hands, head, voice, and legs. With Parkinson’s disease, these tremors usually start in the hands. However, they can also impact the legs and chin.

Upward and downward movements characterize ET in the hands. These tremors can also affect the arms, head, eyelids, and larynx (voice box), which results in a shaky voice.

Essential tremor symptoms can be challenging to detect, as they tend to start discreetly and worsen over time.

People should not confuse essential tremor with what doctors consider to be a physiologic tremor. Many people have a slight tremor only when performing specific tasks, which is entirely reasonable and nothing of concern. Factors such as caffeine, stress, smoking, and tiredness can bring on a physiologic tremor.

What Causes an Essential Tremor?

One risk factor for ET is age. Essential tremor is much more common in people aged 40 and older. And as already mentioned, ET affects up to 5% of people aged over 65.

The other main risk factor is a genetic mutation. The inherited cause of ET is due to it being an autosomal dominant disorder. This means that only one parent needs to have the defective gene for their children to inherit it. Research shows that if one parent has the defective gene, then children have a 50% chance of developing the condition.

What Treatments Are Available to Those with Essential Tremor?

There is currently no cure for essential tremors. Treatment is limited to medication or deep brain stimulation surgery in extreme cases. While there is no medication capable of completely removing the symptoms of essential tremor, some can reduce their severity. Some commonly prescribed medications include:

Cannabis research is ongoing and focuses on its potential in addressing a plethora of medical symptoms. Many states across America now have laws allowing cannabis use in some form.

Cannabidiol, or CBD, is one of the most heavily researched compounds of the marijuana plant. CBD could potentially be hugely significant in mitigating a host of disease-related symptoms in the future. 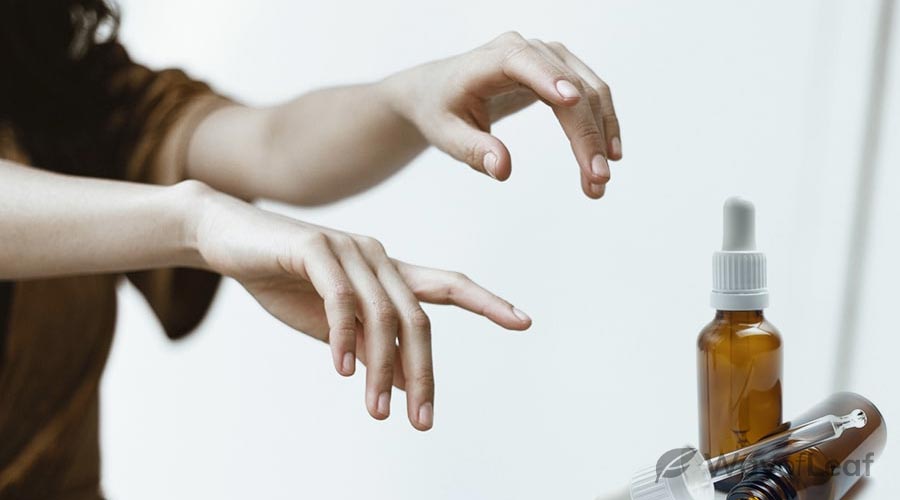 Research has shown that CBD has anti-inflammatory properties and is a patented neuroprotectant. It also displays other promising benefits.

The FDA has also acknowledged CBD’s medicinal benefits for certain types of seizures. The epilepsy drug Epidiolex is the first-ever CBD-based drug the administration has approved.

Despite encouraging research into CBD for other conditions with similar symptoms, experts are no closer to adding essential tremor to the list of qualifying conditions for medical marijuana.

However, there has been a recent breakthrough for the industry as researchers at the University of California San Diego are currently researching the area.

They are conducting a study that will look at the effectiveness and safety of a cannabis formulation for helping ET.

The researchers estimate that approximately sixteen participants with ET would take part in the study. All participants undergo a complete neurological examination and psychological testing as part of the study.

The study will take approximately one year to complete. The researchers will use various types of validated tremor rating measures in the study. As well as quantifying tremor severity, the researchers will assess the safety and tolerability of the cannabis formulation.

The research occurring at the University of California San Diego is hugely crucial for sufferers of ET and the cannabis industry as a whole. This will be the first time that scientists have looked to the plant for its effectiveness in calming essential tremors symptoms.

The results of the study could potentially have a life-changing impact on people with ET. A positive outcome would likely pave the way for further clinical studies using cannabinoids.