Recently, the American Epilepsy Society published the results of one of the most important and conclusive cannabis research studies ever done. The study tested the effects of CBD on 261 subjects with treatment-resistant epilepsy (TRE), and determined that the non-intoxicating cannabinoid caused a significant reduction in seizure frequency in over 60% of patients.

Likewise, a simultaneous study out of New York University’s Comprehensive Epilepsy Center produced similar results. Out of 120 Dravet syndrome patients (Dravet is a rare, life-threatening and debilitating epilepsy disorder), researchers noted a reduction in seizure frequency in over 39% of patients, with 5% going ultimately seizure-free after the 14 week test period had ended.

This article will examine the results of the studies in more detail, what epilepsy is, and what some of its conventional treatment methods are. Also discussed is how CBD functions to reduce both the frequency and severity of seizures in epileptic patients of all age levels.

Epilepsy: What Is It, What Causes It, and Who’s at Risk?

Epilepsy is a neurological disorder wherein individuals suffer from recurring, sporadic, and unpredictable seizures. It’s a far-reaching and somewhat random disease that has no known cause in over 70% of diagnosed cases.

Viral brain infections, localized brain injury/trauma, stroke, Alzheimer’s disease, autism, brain tumors, and blood vessel abnormalities have shown to increase the risk of epilepsy. Experts believe that heredity is likely to play a vital role in the development of epileptic disorders, though the specific genes and triggering events are still relatively unknown.

In terms of occurrence, epilepsy affects about 2.5 million people in America, with over 180,000 new cases arising each year.

What used to be a more common disorder among children is now becoming more prominent in individuals of all ages. According to San Francisco’s VA Epilepsy Center for Excellence, there are now as many people with epilepsy aged 60 and older as there are aged ten or younger.

Other than heredity or traumatic brain injury, there are no known causes that spark the onset of epilepsy – it seems anyone at any age can develop the disorder.

The need to effectively treat epilepsy stems from the fact that recurrent seizures, especially severe ones, can cause significant wear and tear on both the body and the brain. If left unchecked, they can give rise to an array of other health problems down the road.

In mild cases, simple lifestyle changes (which can include anything from diet modifications to Vagus nerve stimulations) are sometimes enough to reduce seizure intensity and frequency. However, pharmaceutical medications and even surgery are often deemed necessary for patients that suffer from more intense and severe forms.

Functionally, all antiepileptic drugs inhibit or otherwise halt various parts of the brain and central nervous system. While relatively effective (these medicines only reduce the occurrence of seizures in up to about 50% of patients), the major downfall of these drugs is that many have serious side effects.

The side effects of medications that reduce seizures caused by epilepsy have been significant enough to send many patients on a hunt for other options. This is where CBD has provided a promising alternative.

Ever since medical publications have begun filtering in and word has started getting out about the potential of CBD for seizures, patients of all ages and walks of life have started using CBD for their seizure symptoms.

Generally speaking, the non-intoxicating cannabinoid has been increasing its appeal over pharmaceutical medications for five main reasons:

Unlike high strength prescription meds, CBD has shown to produce minimal side effects in most individuals. In one particular study, published last year in the neuropsychiatric journal Epilepsia, CBD was categorically presented to effectively reduce seizures with a negligible risk of adverse side effects.

As we cover below, there have been many scientific publications regarding the efficacy of CBD for epilepsy. Seizures have traditionally been one of the most thoroughly researched and well-documented areas of cannabis research within the last three decades.

Again, CBD is a naturally occurring extract that comes directly from the hemp (cannabis) plant.

●     It doesn’t have intoxicating properties

The vast majority of all CBD products come from the hemp plant, which is different from the marijuana plant. Hemp contains less than 0.3% THC (which is the cannabinoid responsible for the stereotypical, mind-altering marijuana highs). This is why CBD oils and other CBD products produce zero intoxicating activity.

●     It targets whole body homeostasis rather than localized neuronal inhibition

Every pharmaceutical epilepsy medication is the same in that it functions by inhibiting neuronal circuits at some specific location in the central nervous system. While they may indeed decrease seizure frequency and intensity, the drugs may impact the body in ways that cause unpleasant side effects.

CBD, on the other hand, functions very differently on a molecular level. Rather than targeting and inhibiting a molecular pathway at one specific location, it interacts with endocannabinoid receptors in all parts of the body and brain to help regulate homeostasis. The National Organization for the Reform of Marijuana Laws (NORML) has gone so far as to call the endocannabinoid system “…the [single] most important physiologic system involved in establishing and maintaining human health.”

CBD for Epilepsy: Options and Other Studies

In the study carried out by the American Epilepsy Society, researchers studied 262 subjects that suffered either from Dravet Syndrome (DS) or Lennox-Gastaut Syndrome (LGS). Both of these conditions are epilepsy syndromes in which patients do not typically experience a reduction in seizure symptoms, even with medication.

The subjects received CBD treatment for three months, with observations and data collection occurring at 4, 8, and 12 weeks. Results showed that overall seizure frequency reduction occurred in 62.7% of DS patients, and 71.1% of LGS patients. 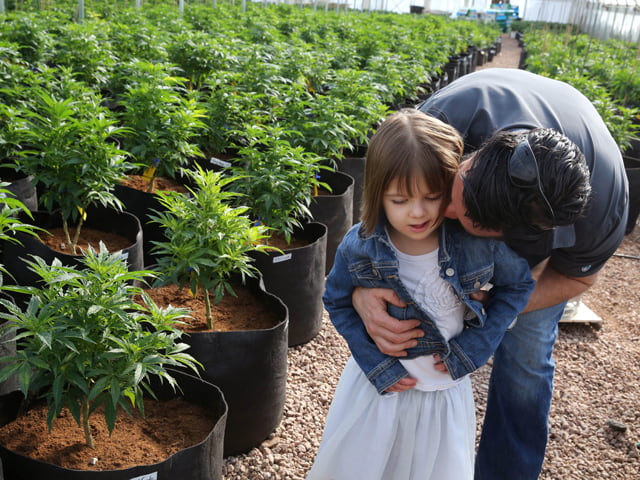 Likewise, 47% of all patients showed at least a 50% reduction in seizures, while 13% of DS patients were entirely seizure-free after the 12 weeks.

It’s challenging to place into proper context the magnitude of the data that these studies presented. These were individuals that had previously suffered intensely debilitating daily seizures to the point that they were unable to carry out a healthy life. The majority of them are now able to function and live a relatively comfortable and productive daily life.

Most of the questions that people have regarding CBD for epilepsy revolve around what kind of specific product to use, and what specific amount they need to administer.

As far as products, CBD oil may be an effective option to reduce seizures. However, it can be very tough to find a reputable brand that manufactures a reliable tincture.

The FDA had issued official warnings to several brands in the past three years for advertising their products as “pure CBD,” when in fact, they contained virtually none of the active cannabinoid. For ease of mind, there’s a list of several of the most well-reviewed and reputable CBD manufacturers located below. (Note that we are not recommending these brands are effective for addressing epilepsy, only that they are generally reputable brands.)

As far as administering the oil, the most direct and effective method is to use the dropper bottle and place drops under the tongue, holding for about 60 seconds before swallowing.

Most experienced CBD users recommend that patients start with a low amount and slowly increase the measurements until they achieve a practical result. But it’s always important for consumers to conduct their research and understand that CBD for epilepsy does not produce the same results in every individual and is not a cure. Some may not experience any improvement at all. Before consuming CBD, always speak with a healthcare professional, especially if you are on any other seizure medications.

CBD Gummies Dosage: How Much Should You Realistically Consume?